POOL Explores the History of Segregation in Aquatic Recreation 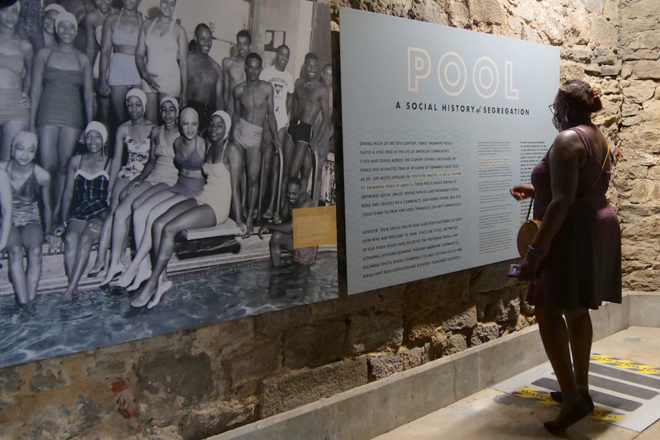 Compared to other cities in the United States, Philadelphia was an early and prolific builder of public swimming pools. The first opened in the 1880s, and today Philly boasts more public pools per capita–over 70 outdoor City pools–than more populated cities like New York and Chicago.

However, like most public amenities in America, not all city residents were welcome there. One notable exception was the John B. Kelly Natatorium, which opened in 1961 as an integrated pool. It was often referred to as the Aquarium Pool, owing to its location along the Schuylkill River in the Fairmount Water Works. From 1812 until 1909, Fairmount Water Works had provided Philadelphia with clean drinking water with the filtration system contained in its picturesque Classical Revival exterior. Today, the building and its mechanisms have been recognized by the National Register of Historic Places, the Philadelphia Register of Historic Places, the Historic American Buildings Survey, and the Historic American Engineering Record.

When the City shifted operations to newer systems elsewhere, it opened an aquarium in the building, which operated for about 50 years. A portion of the site was subsequently converted into a three-lane practice pool for competitive swimmers and named after the patriarch and son of Philadelphia’s Kelly family, both of whom were Olympic rowers. “It was also open to public schools,” noted Victoria Prizzia, president and founder of Habithèque Inc., a Philadelphia-based exhibit design studio, and co-curator of the new exhibition POOL: A Social History of Segregation, currently on view at Fairmount Water Works.“At the time, there was an outcry for swimming lessons because of drownings that had been occurring.” As a result, the original Kelly Pool was one of the few integrated pools in the city at the time. It was closed after sustaining damage from Hurricane Agnes in 1972. 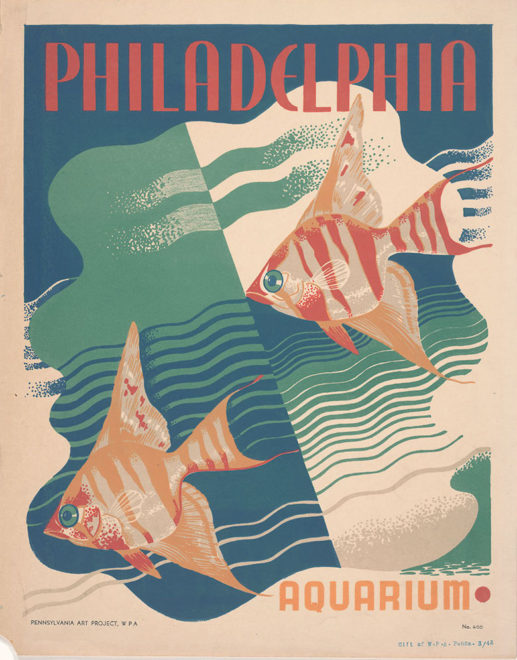 Over the next 30 years, the Philadelphia Water Department used Fairmount Water Works as a base for tours and classes to educate the public about water issues and watershed stewardship. That led to the opening of the Interpretive Center in 2003, but the pool site remained vacant. A rare opportunity to visit the pool came in 2013, when it was included in the Hidden City Festival, with the art collective Camp Little Hope presenting the “Bibotorium,” an installation and discussion of issues surrounding Philadelphia’s water.

Now, a new installation has opened there, appropriately with swimming and pools as the topic, but through the lens of social justice. “They were very intentional in using every bit of the space with lighting, sound installations, interactive elements, artwork, video, and text displays,” said Fairmount Water Works’ communications manager Dionne Watts-Williams of Prizzia and her collaborators who curated the project.

POOL: A Social History of Segregation explores how segregation affected the relationship Black Americans had with water, bodies of water, and swimming. Its multimedia approach includes historical information, profiles of noteworthy Black swimmers and coaches, commissioned artwork, and interactive materials.

“I started imagining it in 2015,” recalled Prizzia. “I’d been doing a lot of work around understanding our water resources. I was reading everything I could about water.” She was especially struck by the book Contested Waters, a social and cultural history of swimming pools in the United States by Jeff Wiltse, professor of history at the University of Montana. 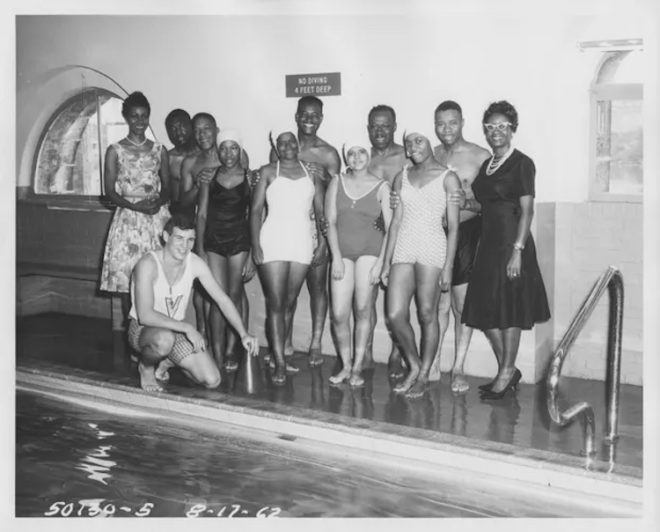 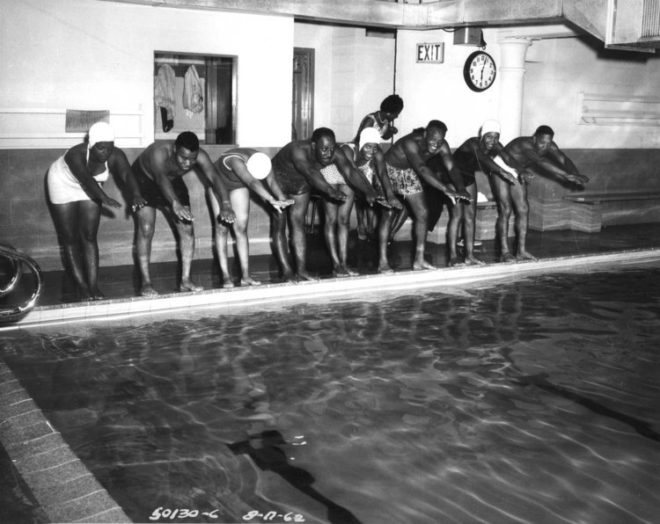 Wiltse and fellow historian Dr. Kevin Dawson of the University of California at Merced assisted Prizzia in establishing the historical narrative of the relationship of the Black diaspora to water. “Kevin Dawson’s display helps dispel the myth that Black people can’t swim,” said Watts-Williams.

The exhibition establishes a direct link between segregation and that myth. “What happens where there’s so much rich culture around something, and then you’re told, no, that’s not for you?” asked Homer Jackson, one of contributors to the exhibit. “When you disconnect people from something so fundamental as water, what happens?”

Pools are seen as emblems of the civil rights movement, as their desegregation here coincided with the breakdown of other barriers. The exhibition includes images from a 1949 riot that occurred in St. Louis, Missouri when Black residents tried to swim in the segregated Fairground Park Pool. Watts-Williams recalled when St. Louis native Randy Hayman, commissioner and CEO of the Philadelphia Water Department, visited the exhibition and took in the display. “He’s actually swam in that pool and had no idea of its history,”

“Throughout there is a conversation between the historical and the contemporary,” noted Prizzia. “There’s the story of segregation and exclusion, but running parallel is the story of great achievement.” A section highlights historic achievements, with the voices of Coach Jim Ellis of Philadelphia Parks and Recreation, who founded the department’s swim team in 1971, Cullen Jones, the first African-American to hold a world record in swimming, and Maritza Correia McClendon, the first Puerto Rican of African descent to be a member of the U.S. Olympic swimming team, and others. 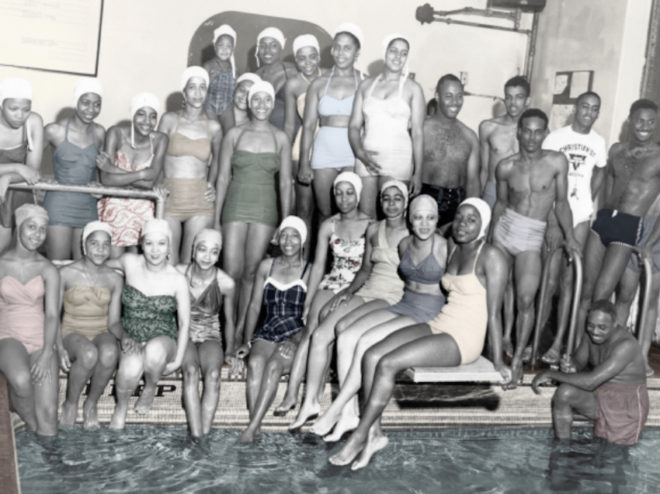 On the contemporary side, there are reflections from a range of Philadelphia residents and others, including visual art commissioned for the exhibition and videos recounting personal experiences around water and swimming, like Whispers from the Deep. “I reached out to people who had stories to tell about water,” said Homer Jackson, the producer. “It’s a combination of poetry, interviews, animated collages.” A native of North Philadelphia, Jackson wrote a segment about water plugs, reminiscing about his childhood experience of cooling off on hot summer days at an open fire hydrant.

The exhibition’s subject, Black Americans and their relationship to water and their experience with segregation, was not always an easy one to broach for Prizzia, who is white. “There were times when I had to be persistent, reaching out to people I wanted to have participate. I had to make an effort to make those connections and secure the trust of this community of people,” she admitted. “There were a lot of conversations where I had to explain why I wanted to do this project. But the timing, with all that was happening with Black Lives Matter and other events, it seemed like this project had to happen now.”

By the end of the summer of 2021, the exhibition was complete and ready for its opening event. Sadly, and ironically, just as a hurricane led to the closure of the Kelly Pool in 1972, the POOL exhibition was shut down by Hurricane Ida. “It was on our opening day,” Watts-Williams recalled. “We were expecting a few hundred people.”

“Hurricane Ida was a big heartbreak,” Prizzia agreed. “At 2 P.M. on the day of the opening we had to cancel. The food was already there, the band was there. About 50 people still showed up. For an hour or two the exhibition was alive as Ida was raging. After they left, we moved the electronics to higher ground, we rolled up banners, and then we had to leave.” 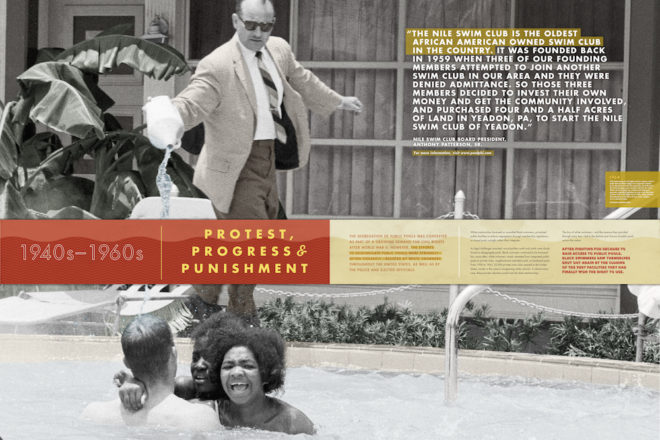 A panel from the exhibition discusses racial bias and the struggle to integrate public pools. | Image: Fairmount Water Works

The incoming water was so strong it even lifted a set of stadium seats that had been bolted to the floor of the old Kelly Natatorium. The water rose to nine feet in the main hall of the interpretive center, while outside, the river rose to nearly two feet above a major flood stage, eventually overflowing its banks in some areas.

When the water retreated it left behind about a foot of sediment throughout the exhibition. “The cleanup was about disinfecting everything and removing the sediment,” said Prizzia. While that work was being done, the staff also concentrated on enhancing the exhibition’s online content, eventually including about 95 percent of it.

The exhibition’s reboot has opened with a new timetable. In conjunction with the visual aspects of the show, there will be a series of concerts at the site over the next two summers. “It’s hard to see everything in this exhibition in one visit,” said Jackson. “We need to give people reasons to come back multiple times.” In planning the concert series he challenged the artists to relate their performance in some way to the exhibit and the theme of water.

POOL: A Social History of Segregation is on view until September 2022. It will then reopen next spring through the end of 2023. See hours of operation, special events, and other exhibition details here: http://poolphl.com/