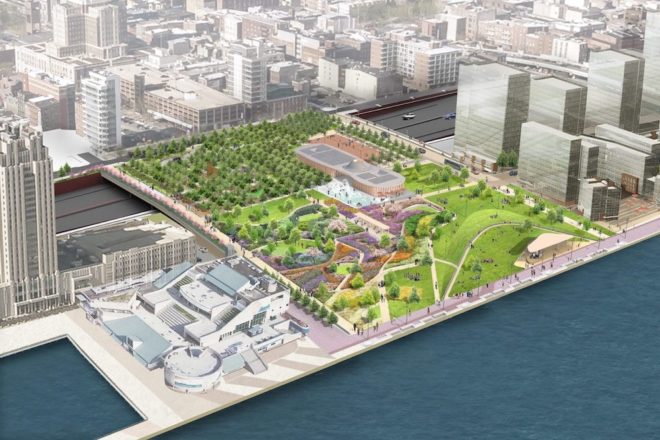 An aerial view of the Park at Penn’s Landing plan. | Rendering: Hargreaves Jones

Most Philadelphians can’t recall a time when the central Delaware River waterfront was not separated from the rest of the city by I-95. Neighborhood resistance to the planning of this stretch of the highway dates back to the 1960s, but a compromise design was completed in 1979, which depressed the roadway under a concrete deck that led to Penn’s Landing.

Aside from that connector, the overall result of I-95’s opening was to cut off easy access to the waterfront. From the beginning, city residents decried the waterfront’s inaccessibility and expressed the desire for recreational amenities on it. It remained like that for a few decades until a series of studies led to the creation of 2012’s Master Plan for the Central Delaware, which included a proposal for a new park. A feasibility study was completed two years later, followed by the engineering plan, which, after pandemic delays, is nearing completion. The construction phase is now estimated to begin in this calendar year and conclude in 2026.

The project managers gave a presentation at the Society Hill Civic Association’s meeting on March 23, which included the design plans, timetable, and construction detours. Over 150 residents logged in to the virtual Zoom meeting to learn what is in store for their neighborhood over the next four years.

The project consists of two main elements: the extending of the South Street pedestrian bridge and the Park at Penn’s Landing. The latter will be built on the “cap” that will extend over I-95 and Columbus Boulevard from Front Street to the river and north to south between Chestnut and Walnut Streets, creating an 11.5 acre park. 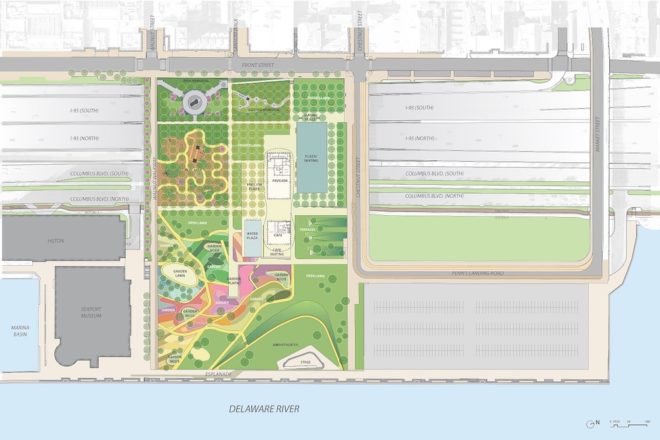 Doug Robbins, a senior planner and urban designer with AECOM who is leading the public outreach for the project, outlined five design goals for the park. The primary goal is to reconnect neighborhoods with the waterfront by removing the barriers of I-95 and Columbus Boulevard and to create a new, public green space. “We tried to not lose sight of the history of the waterfront,” Robbins explained. “120 years ago it wasn’t an industrial wasteland, but a mixed-use area.”

Other goals are to develop a space that can be maintained “with expected resources and capabilities,” to design amenities that are “future proof” in case of improvements on I-95 and Columbus Boulevard, and to foster development in the surrounding area.

The project has partners at the local, state, and federal levels. The Federal Highway Administration and PennDOT will be responsible for the infrastructure, the Delaware River Waterfront Corporation (DRWC) will program and manage the site, and the City of Philadelphia will own it.

The South Street pedestrian bridge currently crosses over I-95. With the planned extension, it will terminate on the east side of Columbus Boulevard. “That will transform it into a gateway to Penn’s Landing,” said Robbins. 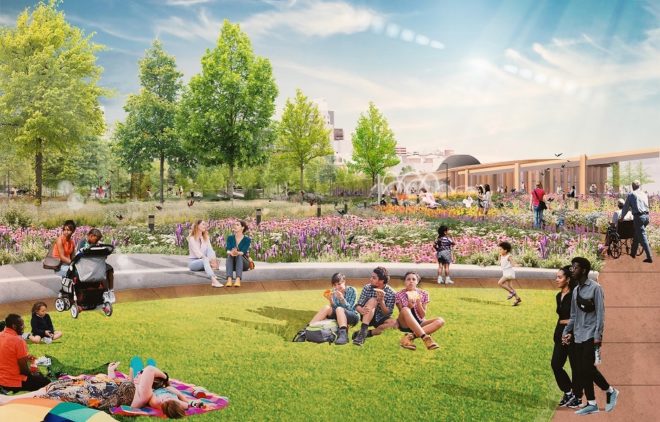 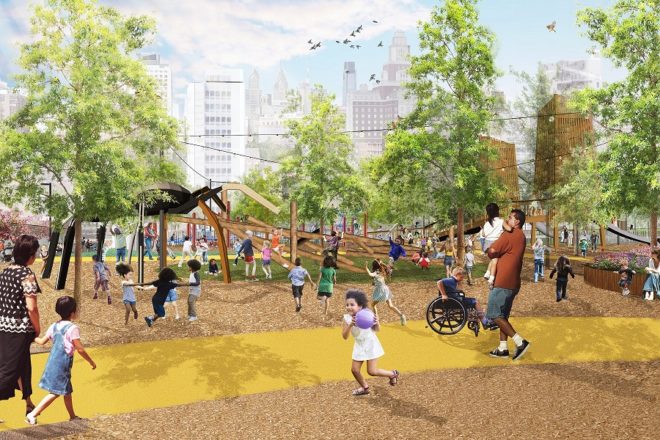 Southeast gardens corner of the park and the play area. | Renderings: Hargreaves Jones

At Lombard Circle, there is a jog in the bike path on the east side of Columbus Boulevard, and that is where the bridge extension will terminate, according to Elaine Elbich, portfolio manager for PennDOT’s District 6, which covers Southeastern Pennsylvania.

The park will have several features and amenities. The memorials in the area, including the Irish and Scottish memorials, will be relocated to the southwestern corner of the tract.

On the north side, a rink will be used for ice skating in the winter and as a plaza for events during other seasons. Architectural firm Kieran Timberlake has designed a pavilion and café that will connect by a breezeway to the middle of the park. Other amenities will include a play area and terraced gardens.

Moving east, about halfway down from the park entrance, the topography will begin to slope down to an amphitheater on the waterfront.

Ken Haines, a principal with the landscape architectural firm Hargreaves Jones, said the western side of the park will be planted with groves of trees such as oaks, maples, and gingkos, giving way to more ornamental plantings moving towards the water and ending with terraced gardens. He noted that the planning was done in consultation with the Pennsylvania Horticultural Society, which maintains the trees along the waterfront for the DRWC. 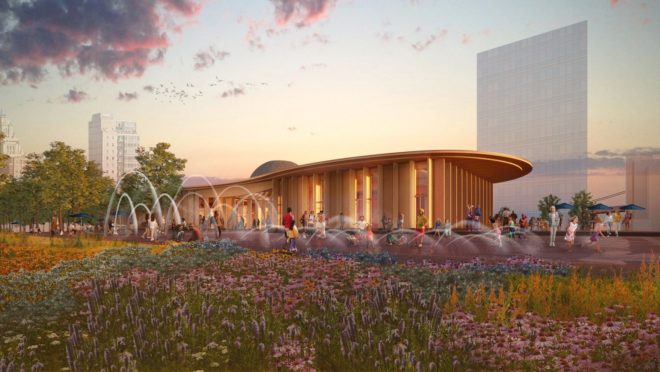 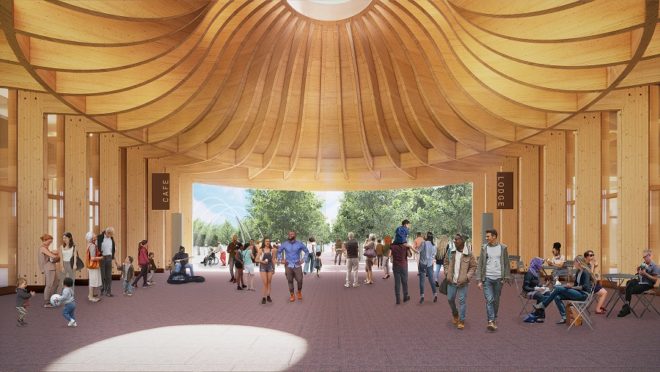 A timber building designed by KieranTimberlake will house a café, a pavilion, rental spaces for parties and events, public bathrooms, and DRWC offices. | Renderings: Hargreaves Jones and KieranTimberlake

Project plans also incorporate resiliency factors after consulting with floodplain managers in the Philadelphia Water Department (PWD) and Office of Sustainability. “We’re concerned with anything within the zone that PWD models indicate might experience flooding,” noted Elbich. “We’ve given careful thought to that edge with the possibility it might experience water-level rise.”

Some attendees asked about traffic noise in the park from the highway just below it. “The noise from I-95 will be mitigated by clear noise wall panels on the I-95 and Columbus Boulevard overpasses on the park level along Walnut and Chestnut Streets,” explained Elbich.

Notably absent is a dog park. Robbins said input from public meetings and website comments were roughly equal in favor of and against it. “This is a large, multi-acre park, but not everything mentioned could be accommodated.”

The presentation at the meeting also addressed the planned detours for the construction phase of the project. The presenters divided them into two categories: regional detours and local detours during overnight closures on weekdays. Regional detours, focusing on trucks and through traffic on I-95, will route them onto the Vine Street Expressway and I-76 and then back onto I-95 near the airport. 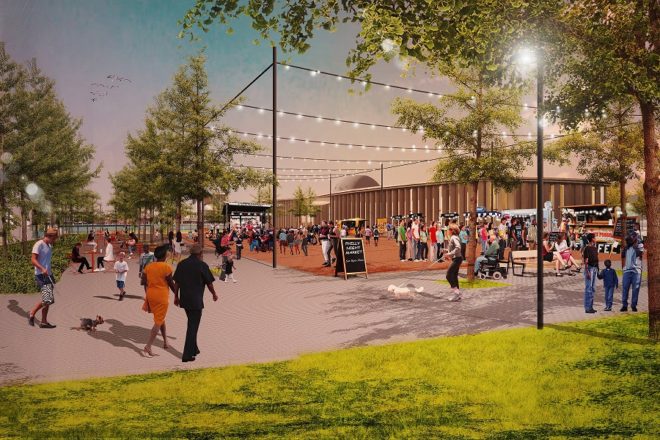 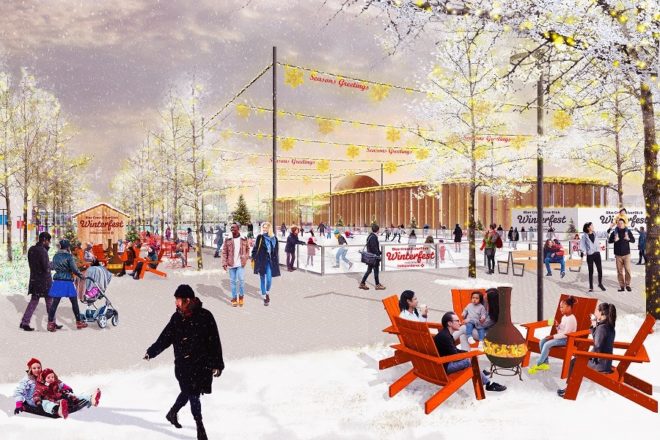 RiverRink Plaza in the summer and the winter. | Renderings: Hargreaves Jones

For the local detours of Columbus Boulevard during the construction of the cap over it and I-95, traffic will exit at Callowhill and Race Streets, travel along 5th and 6th Streets and head back on via Spruce and Pine Streets. When the construction phase moves on to the South Street Bridge extension, the detours will shift to the south, exiting onto Spruce and Pine Streets, again along 5th and 6th Streets and back onto Columbus Boulevard via Washington Avenue.

The local detours were a source of concern for some Society Hill and Old City residents in attendance, particularly along Spruce and Pine Streets. “To put all of Columbus Boulevard’s traffic on Spruce and Pine is not a good scene,” remarked Larry Spector, president of Society Hill Civic Association. “People on these streets already deal with dirt bikes and ATVs on summer nights. I hope there is some thought as to how to handle it.”

Project manager Debbie Ferraro, associate vice president and transportation division manager of Pennoni Engineers, pointed out that the overnight detours would be intermittent over two years, rather than throughout the four year construction period. “It’s just for demolition and the placement of the beams above,” she explained. “We coordinated with the City, and these are the routes we came up with.”

Public comments also centered around traffic concerns of another sort. The plans for the park include ample accommodations for pedestrians, bicyclists, and transit riders, with the hope that these will be the preferable means to reach the park and waterfront. Motor vehicle traffic access to the area is anticipated to be mostly along Front Street. Concerns were expressed that Society Hill and Old City, already challenging neighborhoods for parking, would experience further pressures from park visitors who choose to drive to the site. Others, however, applauded the emphasis on non-automobile transportation and the deliberate lack of additional parking. “It’s the philosophical debate between using cars versus bikes,” said Spector.