The Sizzle and Fizzle of Philly’s Old Fun Parks

Long before Disneyland was a gleam in Mickey Mouse’s eyes, captains of industry in Philadelphia saw the financial potential of amusement parks. Opening in the mid-1890s, Willow Grove Park and Woodside Park drew residents from densely-packed row house neighborhoods to the pastoral beauty of Montgomery County and West Fairmount Park. The impetus for both parks was the innovation of the trolley car system, from horse-drawn to electric. 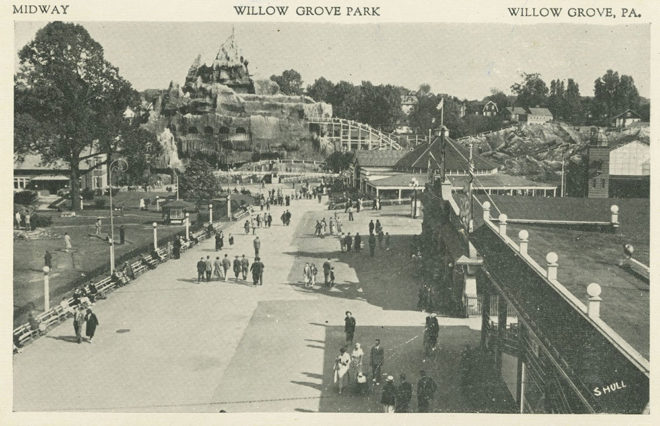 Wealthy industrialists Peter Widener and William Elkins were looking for a way to promote their trolley line, the Philadelphia Traction Company, which would later become Philadelphia Rapid Transit (PRT) then Philadelphia Transit Company (PTC) and then SEPTA. Meanwhile, Caleb Fox, owner of the People’s Traction Company, a competing trolley line, observed that hundreds of city dwellers were taking his trolley to the end of the line in Jenkintown and spending money on beer and food served at a large hotel. Fox wanted a piece of the action. He bought up 100 acres of farmland situated along Moreland Avenue between Old York Road and Welsh Road. The vast property was initially used just for picnics and was later expanded to create an amusement park. Admission was free.

In 1896, Widener and Elkins, who had taken over Fox’s trolley company, opened a acoustically dynamic band shell that featured the leading conductors of their day. With music alternating between the patriotic marches of John Philip Sousa and classical music, these concerts drew crowds of up to 52,000 people. The free concerts earned Willow Grove Park the accolade of “The Music Capitol of America.” The tone was high brow. Ladies wore long dresses and gloves. Gentlemen wore suits, ties, and straw hats, even in the summer heat. No alcoholic beverages were served. 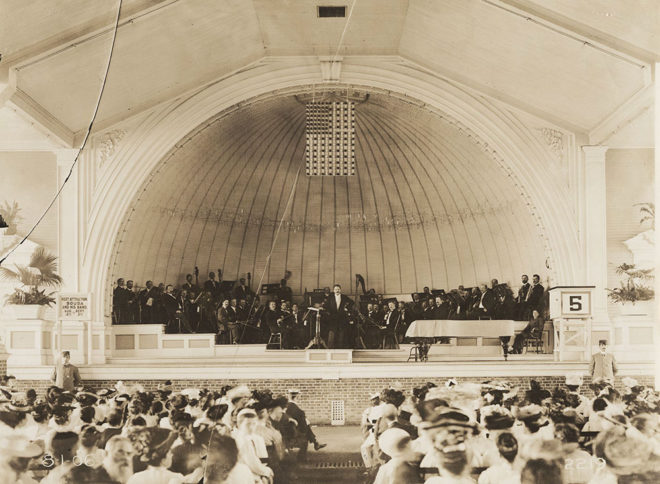 Victor Herbert and His Orchestra at Willow Grove Park in 1907. | Image courtesy of Print and Picture Collection, Free Library of Philadelphia

A major attraction was the 10-acre man-made lake which used for boating and featured the tallest electric fountain in the nation. The park and fountain were illuminated at night with more than 50,000 lights. Every Saturday night there was a fireworks display.

Other attractions included a casino, an elegant restaurant that could seat up to 500 patrons, and a movie theater screening silent movies. In 1906, a spectacular carousel designed by the Philadelphia Toboggan Company was added.

Amusements and rides took up only a small portion of the grounds with the majority remaining sprawling parkland. 750 saplings of various kinds of trees were planted, along with 3,500 assorted shrubbery, thousand of plants including honeysuckles, and 500 rose trees. The result provided deep shade, beauty, and an enticing aroma. 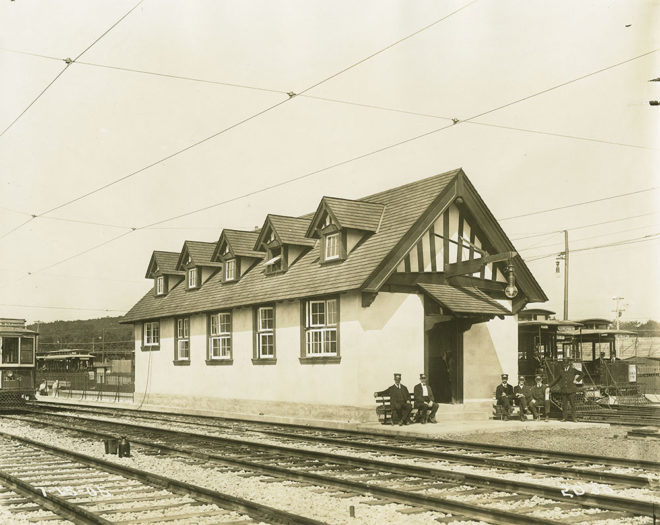 By the end of its first season, over five million people had visited the park. Three new trolley lines were added to respond to the demand.

In retrospect, Willow Grove Park was like the Las Vegas of its day without the booze, slot machines, and showgirls. A 1907 park brochure describes a new attraction, Venice, as “the eighth wonder of the world.” Passengers traveled on a gondola through canals and under romantic bridges that replicated the City of Water’s historic buildings and churches for half a mile.

Willow Grove Parkreached peak attendance prior to World War I. In 1926, the park was purchased from the trolley consortium by Meyer Davis, who added performing elephants, balloon rides, and concert performances by Paul Whitman, the “King of Jazz.” As ladies hemlines climbed above their knees, the music became wilder and so did the rides. The Whip and the Thunderbolt were not for the faint of heart. 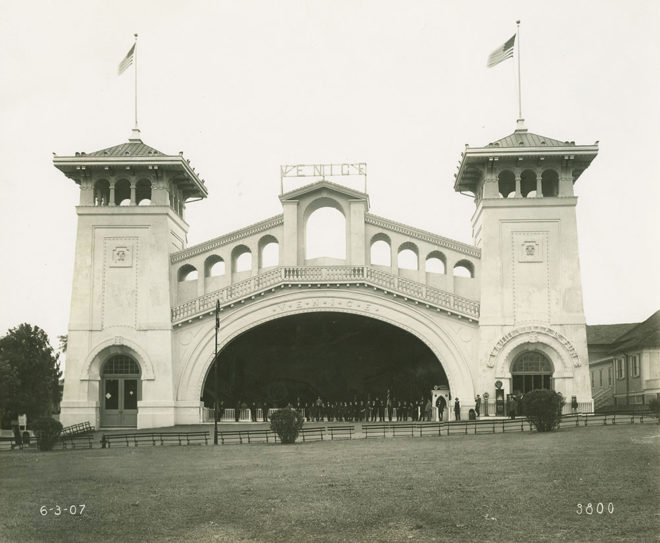 Entrance to the Venice amusement ride at Willow Grove Park in 1907. | Image courtesy of Print and Picture Collection, Free Library of Philadelphia

Just as technology gave rise to the park, it also led to its demise. First came radio, which brought live music into every home. Next came the automobile, which made trolleys obsolete and opened the door to other destinations.

The economic and baby boom following WWII created a brief renaissance for Willow Grove Park, but, in 1945, over 13 acres of the park were developed into a shopping center. The same developer purchased what was left of the park in 1958 and streetcar service there ended the same year.

Around 1970, a syndicate leased the amusement section of the park and converted it into a theme park called “Six-Gun Territory.” In 1976, it was demolished to make way for the Willow Grove Shopping Mall. 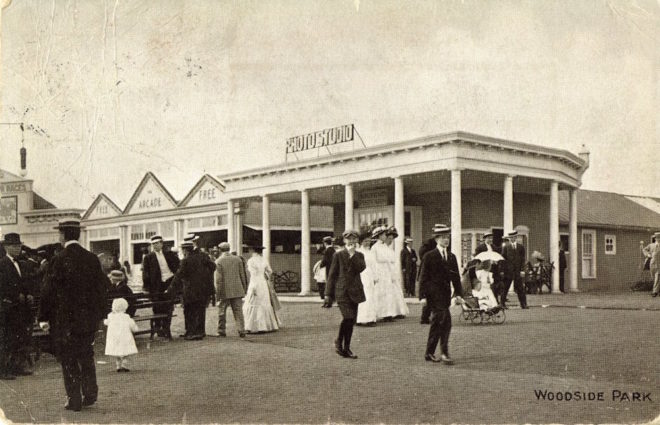 Woodside Park’s opened in 1897, just one year after the opening of Willow Grove Park. Located just outside of West Fairmount Park near the intersection of Ford and Monument Roads, it too was created and owned by the management of the trolley line that ended at its entrance.

Unlike Willow Grove Park, Woodside Park did not have upper middle class ambitions. But it did have a lake, a ballroom with an orchestra, fireworks, a roller coaster, and the kinds of rides that made little kids scream with delight. In 1908, Woodside added a carousel from North Philadelphia’s Dentzel Carousel Company containing 52 hand-carved wooden animals. This historic carousel in now housed at the Please Touch Museum in West Fairmount Park. 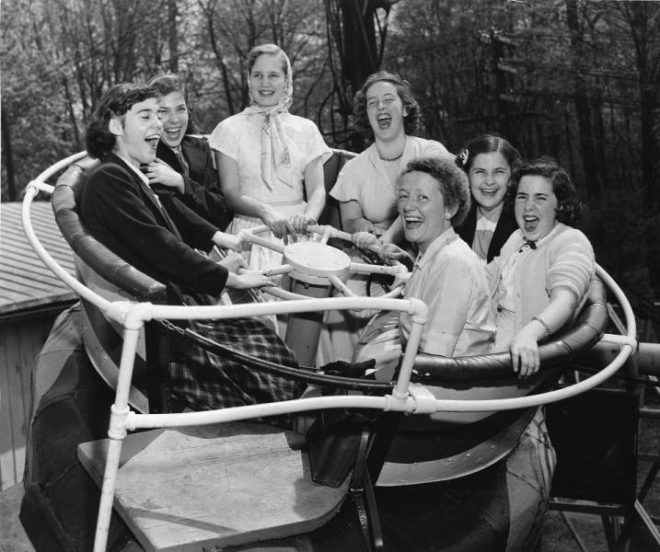 Although the rides were open to all, Woodside Park was notorious for its racist policies. African Americans were not allowed in the Roller-Dome or the Crystal Pool which had a 5,000-swimmer capacity. When a Black person tried to enter the pool park officials told them it was for member’s only. If they tried to pay the one dollar membership fee they were told the pool was full. 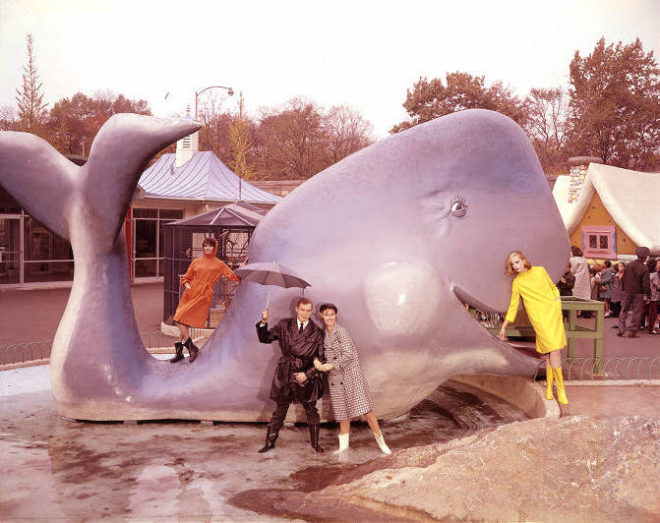 In August 1945, a large-scale plan to expose Woodside Park’s discriminatory practices led to the arrest of a guard, the president of the park’s swimming club, and the park manager. Similar efforts led to the temporary closure of the Roller-Dome. However, the Crystal Pool remained open to white patrons only, and the case against the park was dismissed. Protests and picketing went on for several years. 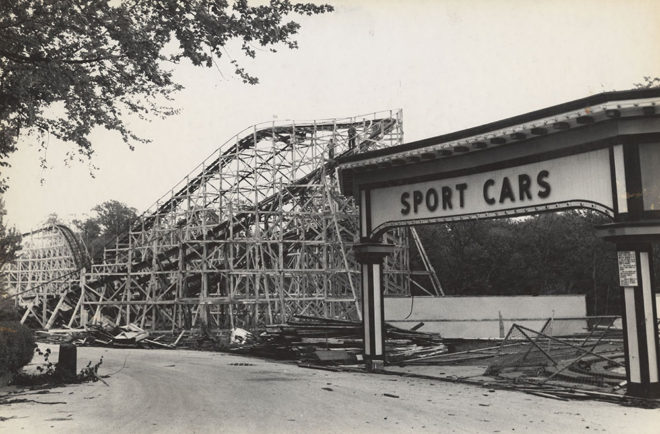 Discriminatory practices came to an end at the park in 1952 when the City of Philadelphia took over management of Crystal Pool. By then, attendance was dwindling. Woodside Park closed in 1955 ,and the land was sold to a developer who built a residential complex now known as Balwynne Park.

Both Willow Grove Park and Woodside Park were eclipsed by the opening of Disneyland in 1955. In retrospect, they were the product of another time, a Victorian vision which refused to adapt to the cultural changes of the 20th century.