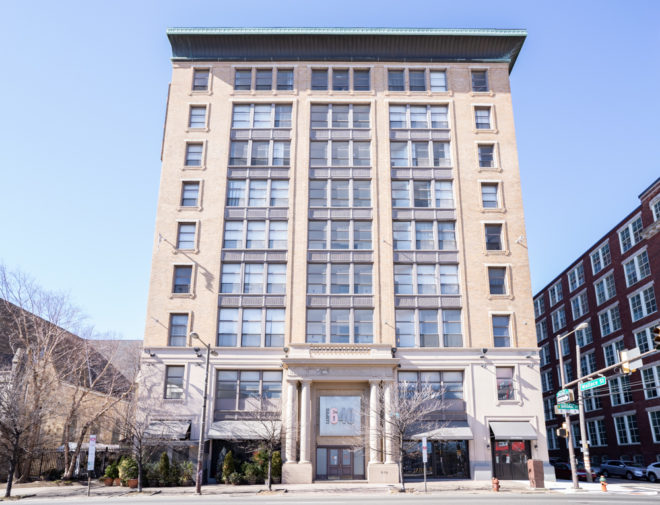 The Mulford Building (aka Metropolitan Building) at 640 N. Broad Street was completed in 1913 and designed by Charles Balderston. | Photo: Michael Bixler

Every few decades North Broad Street reimagines itself. In 1830, when Matthias Baldwin built a locomotive factory at Broad and Spring Garden Streets it was outside the city limits. By the 1870s, it was an elite address, home to Philadelphia’s wealthy industrialists. In the early 20th century, North Broad Street was known as Automobile Row. However, its identity as the nexus of the city’s garment industry has largely disappeared from public memory. That is, unless you look into the history of the Mulford Building at the southwest corner of Broad and Wallace Streets. Now the home of Osteria, an upscale Italian restaurant on the first floor and an apartment tower, 640 Lofts, it was originally built in 1912 to accommodate the city’s thriving clothing industry. At the time, Philadelphia (not New York) was the world’s capital of textile and clothing manufacturing.

Designed by industrial architect Charles Balderston in Classical Revival style and completed in 1913, the 9-story, steel-frame building clad in limestone and brick was originally known as the Metropolitan Building. Balderson designed over 50 commercial and industrial buildings. The Mulford Building was his largest. The 360,000 square foot building extends all the way to 15th Street. Its elegant, two-story portico features limestone Tuscan columns on raised limestone pedestals. The lobby has terrazzo floors with mosaic tiles. From the first to the third floor a staircase has pink and gray-veined marble treads and risers with marble wainscoting on the first floor landing. 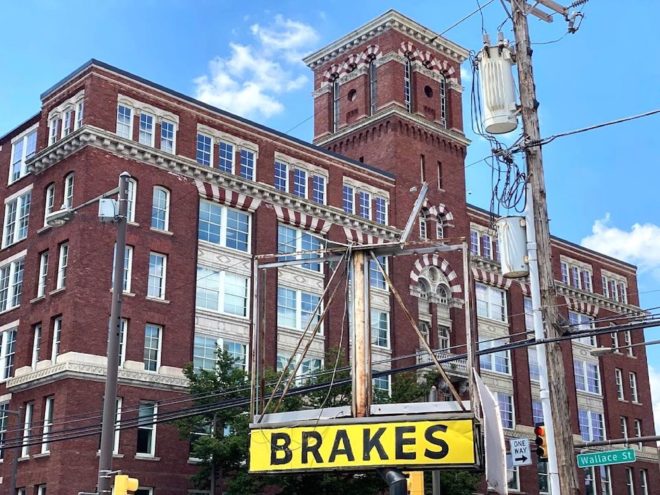 Snellenburg’s Clothing Factory, one of the last vestiges of the department store empire, has been the headquarters of the Philadelphia Corporation for Aging since 1990. | Photo: Michael Bixler

More than two dozen garment manufacturers rented space at 640 N. Broad Street from 1913 to 1918, employing nearly 1,100 men and women. This was not the first evidence of North Broad Street’s emerging Garment Row. In 1905, Snellenburg’s department store had already built a clothing factory known as the Snellenburg’s Clothing Factory across the street at 642 N. Broad Street. A powerhouse of clothing production, Snellenburg’s once employed over 3,000 workers. In operation through the 1920s, the Snellenburg’s factory is now the home of Philadelphia Corporation for Aging. These large, light-filled buildings marked a departure from the overcrowded, sweatshop district in Old City in the mid-1800s.

In 1918, the former Metropolian Building was purchased by the Mulford Company, a pharmaceutical firm. The company made national headlines in 1925 when its diphtheria anti-toxin vaccine was transported to Nome, Alaska by way of rail and dog sled to stop a life-threatening epidemic. Not unlike our current pandemic, diphtheria was a highly contagious bacterial respiratory disease that is now rare due to immunization. The 1925 event continues to be commemorated annually by the Iditarod Dog Sled Race. 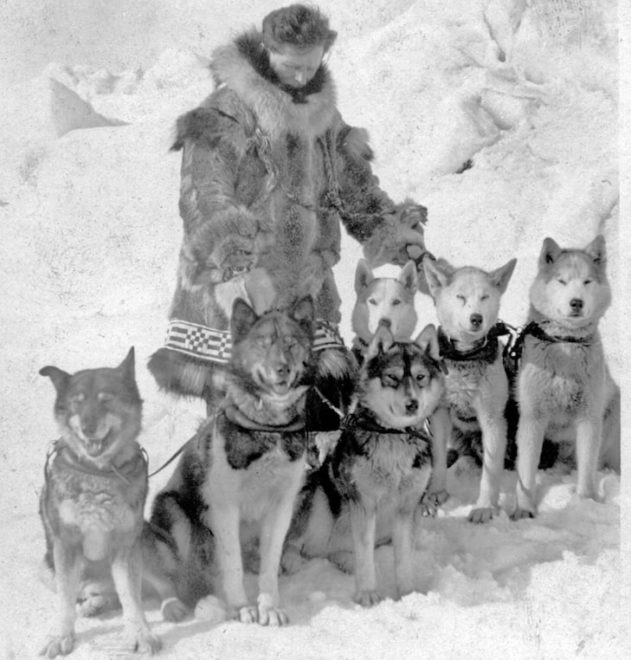 In 1929, the Mulford Company merged with Sharp & Dohme Corp. A four-story, orange brick addition was added to the building in 1934. In 1963, the building reverted to making clothing again by such companies as Botany 500. This was the twilight of Philadelphia clothing manufacturing. Starting in the 1920s, the textile business had largely moved south to escape labor unions and to reduce labor costs. By the 1970s, garment manufacturing had shifted to China.

The largest tenant of the Mulford Bluilding during the middle of the 20th century was Albert Nipon. Trained as an accountant, Nipon and his wife Pearl started in 1954 with a line of maternity clothes. He ran the business, she designed the clothes. Her qualifications? A degree from Overbrook High School. 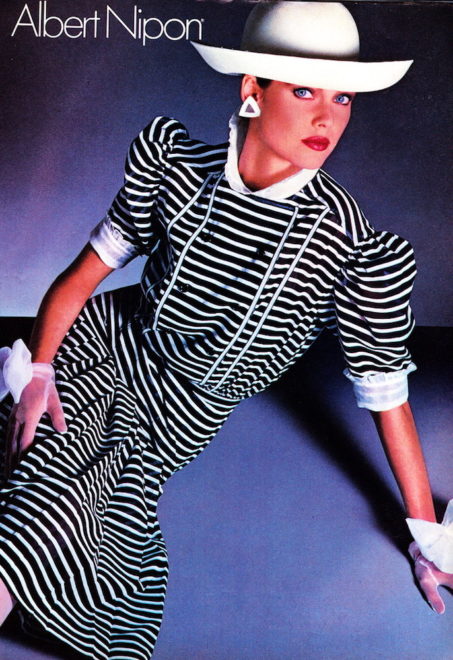 An advertisement for Albert Nipon clothing from 1983. | Image: Ebay

In 1972, when women were having less babies due to the rise of birth control pills, the Nipons switched gears. At the height of the drug-fueled disco era, Pearl Nippon came up with a collection of prim dresses for career woman that were tired of pantsuits.

Known in the garment biz as “knock-offs,” the Nipon label offered copies of European designer dresses at prices upper and middle class American women were willing to pay. The label was embraced by high fashion magazines and licensed by Vogue Patterns. Mary Tyler Moore, Nancy Reagan, and Barbara Walters were among its ardent adherents.

By 1984, Albert Nipon was valued at $60 million. That is when the IRS came calling. Worthy of a Coen Brothers movie, Nipon was caught bribing two IRS agents and served 20 months at a minimum-security prison in Florida where he worked on his tan. Declaring bankruptcy in 1988, the Nipon company was acquired by Leslie Fay, a publicly-owned clothing company. Botany 500 continued manufacturing men’s pants in the Mulford Building until 1995. 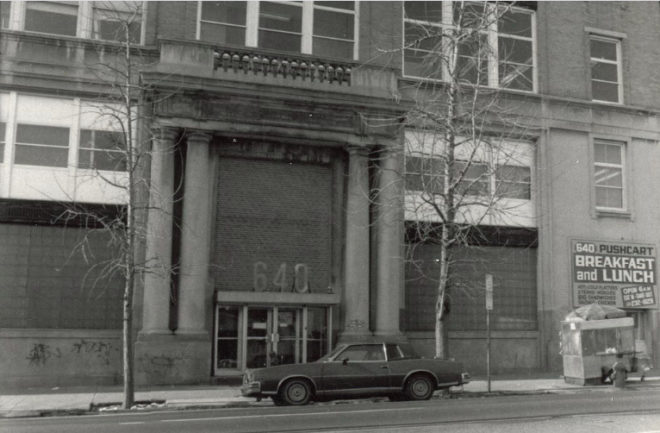 The entrance of the Mulford Building looking a little worse for wear. Date unknown. | Image courtesy of The Athenaeum of Philadelphia

When the garment industry departed, artists moved into the empty loft spaces. In 2004, the Mulford Building was added to the National Register of Historic Places. After a period of vacancy, the building was converted in 2005 into 266 apartments and renamed 640 Lofts. The top of the building’s 1934 addition became an indoor swimming pool and roof deck.

The opening of Osteria in 2007 on the first floor signaled yet another identity for North Broad Street as a trendy dining destination. The next time you eat there, try to tune out the cacophony of conversation and listen for the hum of ghostly sewing machines.