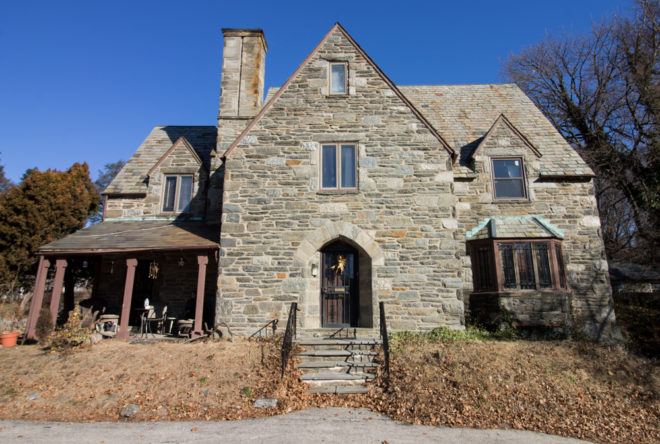 The former rectory of the Church of the Annunciation in Mount Airy is currently being used as a rental property. A six-month demolition moratorium in the 8th District would legally protect buildings that are not on the Philadelphia Register of Historic Places and give preservation advocates time to identify properties like this one as potential candidates for a historic district. | Photo: Michael Bixler

A bill introduced to Philadelphia City Council earlier this month proposes to place a six-month moratorium on demolitions in the entire 8th District. As written, it is a brief piece of legislation that covers most of the basics: who, what, when, and where, but not why.

“Any pause on demolition activity is a welcome one,” said Patrick Grossi, advocacy director of the Preservation Alliance for Greater Philadelphia. “We’d like to learn more about what’s behind it.”

Tuomi Forrest, executive director of Historic Germantown agreed. “Germantown is seeing development pressure. There are all sorts of buildings that could be considered under threat.”

“She’s heard from constituents that it feels out of control and that value is being extracted, not improving, our community,” observed Lori Salganicoff, executive director of the Chestnut Hill Conservancy.

Demolition moratoriums have been used in other parts of the city. Councilmember Curtis Jones has twice proposed and succeeded in passing one-year moratoriums in his district. The first, approved in 2018, was used to designate a thematic historic district between Wissahickon Creek and Northwest Avenue. It essentially bought the Philadelphia Historical Commission time to consider the designation of some of the more than 300 buildings along Ridge Avenue that might qualify.

A 200-year-old home at 6649 Ridge Avenue was razed prior to a demolition moratorium bill introduced by Councilperson Curtis Jones in 2017. A mid-rise condominium complex was built in its place. | Photo: Michael Bixler

The extent of Bass’s proposal is new, however. “I don’t know if a demolition moratorium has ever been done for an entire district,” noted Grossi. “This bill makes the 8th District a historic district for six months.”

Bass says she has her own reasons for introducing the bill. “Developers come in, go to a location with the zoning that they want, that can include three, four, five story buildings and they offer a pocketful of money to the owners,” she said. “It’s a way for developers to bypass community input. We need to find a way to avoid this predatory practice.”

Aside from wanting to know more about the bill, reaction by some in the district has been positive, although they’re quick to point out that they are not anti-development. “The preservation community may have gotten a bad rap, seeming to want to stop everything,” said Salganicoff. “We believe development is important to the health of the city, but good development will leverage the assets we have, rather than replacing them.”

There are a few exceptions to the ban, such as allowing property owners to apply for a demolition permit, but requiring a review by the Historical Commission and allowing demolitions that would cost $150,000 or less. “A lot of the tear downs have been neighborhood housing stock, which might not come under this bill, because of the $150,000 demolition threshold,” noted Forrest.

As always, demolitions would be allowed if the Department of Licenses and Inspection deems the structure to be imminently dangerous. “If you have a horrible property and someone’s going to replace it with quality building, that a great thing. Philadelphia has a lot of those,” said Brad Bank, a real estate developer who has done work in the area. 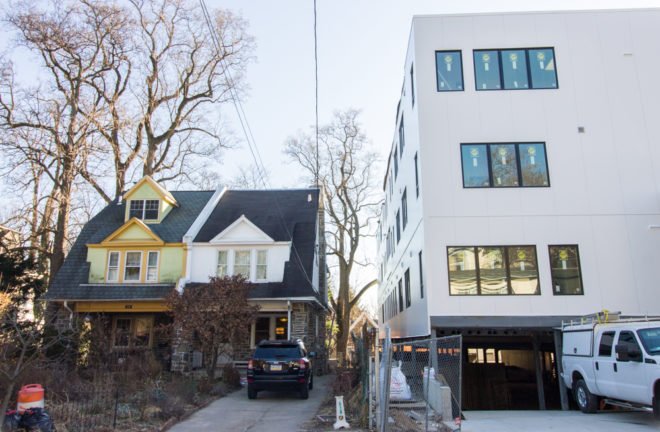 In 2017 a bulky condominium box was built along the 500 block of Carpenter Lane. | Photo: Michael Bixler

A lingering question is what can be accomplished in six months. “That’s too short to do broad survey work, but it could be a triage approach,” said Forrest. “We’d like to see a broad, inclusive survey of cultural resources that’s informed by neighborhood input.”

“Our concern is that we don’t know what we’re losing,” Salganicoff agreed.

Without offering any specific details, Bass stated, “The idea is to come out with a thorough process that is less predatory and works for everyone, the community, and the developers.”

“We hope that, coming out of the bill, we have something that can be sustainable going forward,” said Grossi. “Moratoriums are perceived as a kind of blunt instrument, and they are. Instituting a demolition review might be preferable, with the express purpose of evaluating properties for historic evidence before going ahead.”

The bill has been sent to the City’s Committee on Rules in advance of being considered by the full City Council.