Be My Valentine: a History of Pagan Rituals and Lucrative Love Letters

In 1849, Philadelphia’s Graham’s American Monthly Magazine of Literature and Art published the following statement: “St. Valentine’s Day is becoming, nay, it has become, a national holyday. We shall think better of the age in which we live, for the restoration to homage and joyful devotion of good old St. Valentine of blessed memory.” Graham’s was one of many Philadelphia-based and national publications that opened the floodgates to the commercialization of the holiday of love. 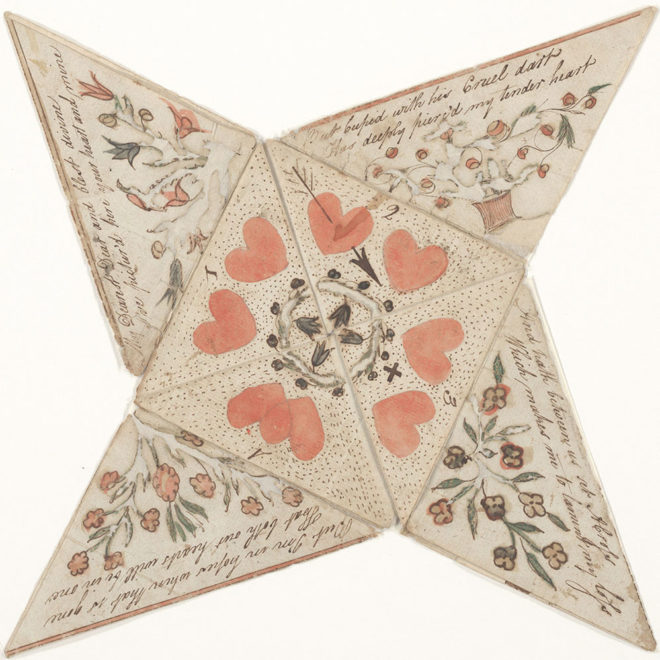 This handmade Valentine’s Day card was created in Pennsylvania circa 1800. | Image courtesy of Rare Book Department, Free Library of Philadelphia

Historically, holidays have rarely started the way we now assume they did. Valentine’s Day is widely believed to have began with the martyrdom of three different saints named Valentine or Valentinus in Rome during the 3rd century. This Roman version is linked to a pagan festival known as Lupercalia, which was celebrated on or around February 15. The festival celebrated fertility as a priest sacrificed an animal with a tail and then used the tail to gently whip young women in the belief that this would improve their likelihood of getting pregnant.

Eventually, celebrations of pagan holidays, including Valentine’s Day, were forbidden, but not entirely phased out, as English and German settlers introduced some of them to the New World. Valentine’s Day poems first appeared in publications like the Pennsylvania Mercury and Universal Advertiser, which published Corydon’s “February—An Ode” on February 18, 1789. An excerpt: “And now they quit the ftraw–roof’d fhed, Where late immur’d they lay; By thee (kind inftinct!) ever led, To hail the lover’s day.” 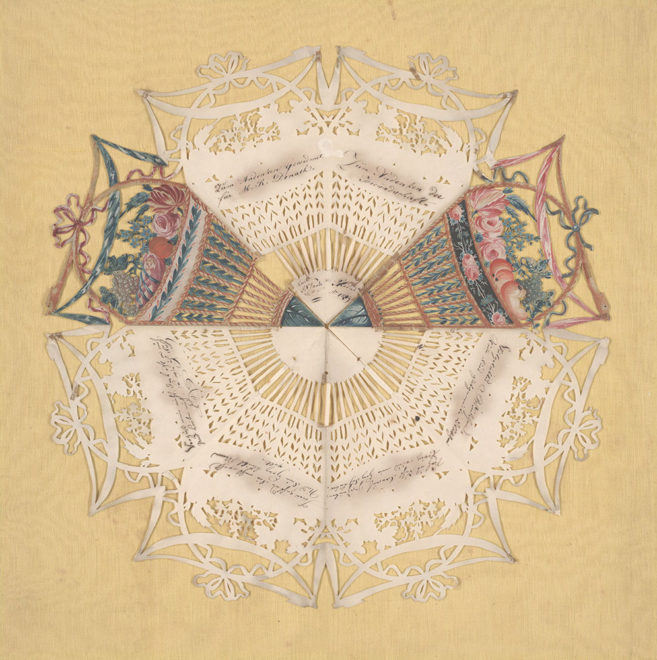 This Valentine’s Day card was made in Philadelphia in 1809 by J. N. Janke and dedicated to M. R. Donath. | Image courtesy of Rare Book Department, Free Library of Philadelphia

At the beginning of the 19th century, Valentine’s Day was seen as a wholly personal and quiet affair. The February 20, 1829 edition of the Aurora & Pennsylvania Gazette (Philadelphia) inquired about the origin of St. Valentine’s Day, or St. Valentine’s Eve, which had recently experienced a nationwide revival “for the benefit of the ladies, and only them.”

Instead of today’s custom of giving candies, sweets, or right swipes on Tinder, handmade cards were often passed among friends, spouses, prospective suitors, and even foes and allowed individuals to showcase their creativity.

Due to Pennsylvania’s abundance of paper mills, the folk art known as Fraktur–for the “fractured” or angular gothic font–was created and used calligraphy and other embellishments in handmade Valentine’s cards. The style became popular with Pennsylvania Germans from the beginning of the 18th century to about 1835. Throughout this period various ornamental styles like Scherenschnitte–a traditional Germanic paper-cutting technique–brought over by the Pennsylvania Dutch also became available, allowing the giver to become more creative in professing affection. 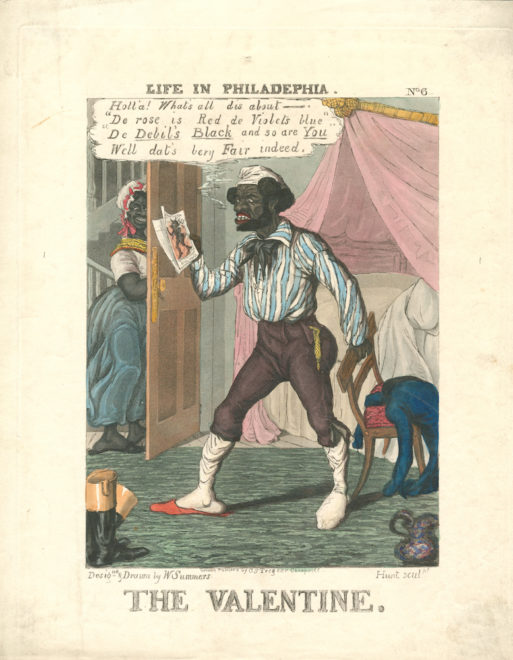 This racist Valentine’s Day card from 1833 features offensive caricatures of an African American man and woman. | Image courtesy of The Library Company of Philadelphia

Early on there were instances of racism related to this holiday. For example, the “Life in Philadelphia” series featured caricatures of Black and Brown locals in their works. However, the spirit of the holiday was mostly wholesome and innocent, but that would change throughout the 1840s.

Realizing how commercially viable Valentine’s cards could be, promotions were ramped up throughout the mid-1800s. By 1850, Peterson’s of Philadelphia had become Cupid’s headquarters, while other merchants promoted their companies as Valentine’s Theater or Valentine’s Castle.

Every aspect of the holiday was made commercially viable, and thus the quality, and originality, of the cards began to decline. Those who did not know what to write found a solution in Valentine’s cards with printed messages aimed at various individuals ranging from sweethearts to plumbers. Publisher R. Magee began a lucrative business in creating writers’ booklets in 1841. By 1854, he made the claim of having 200 employees devoted entirely to the business. 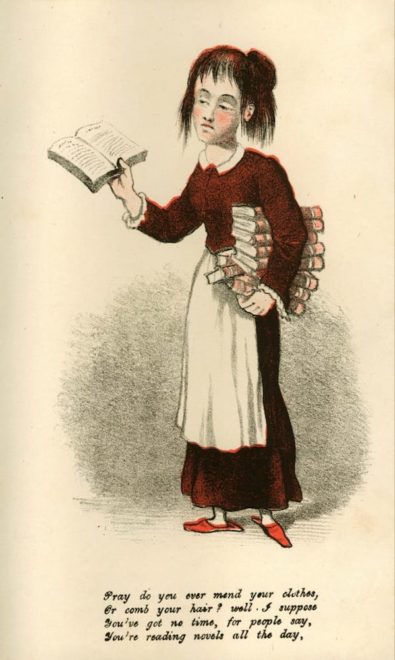 A Vinegar Valentine from the 1800s embodies the Victorian era. The card reads “Pray do you ever mend your clothes, Or comb your hair? well, I suppose you’ve got no time, for people say, You’re reading novels all the day.”

Those wanting to profess their feelings on a budget could purchase Penny Dreadfuls or Vinegar Valentine’s so titled because they were inexpensive and used vulgar language or imagery. The lucrative business of mass-producing cards started to develop, and Philadelphia-based publishers did not miss out on the new-found business.

The Philadelphia publication Godey’s Lady’s Book pushed against the trend in its February 1849 issue by stating that a subscription would be a far more acceptable Valentine’s gift than overpriced cards. 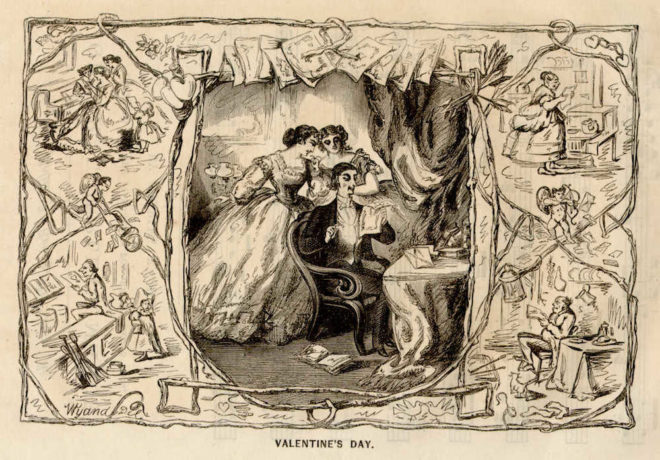 In 1878, poet Fay Hempstead penned Random Arrows, which was published in Philadelphia and had detailed descriptions of flowers, leaves, and other botanic verbiage that signaled a double entendre to her readers.

Graham’s Monthly, possibly the first American magazine to copyright its work, was founded in 1840 by Philadelphian George Rex Graham, who previously worked for the Saturday Evening Post. He first used the holiday to boost publication sales and profits in February 1849. 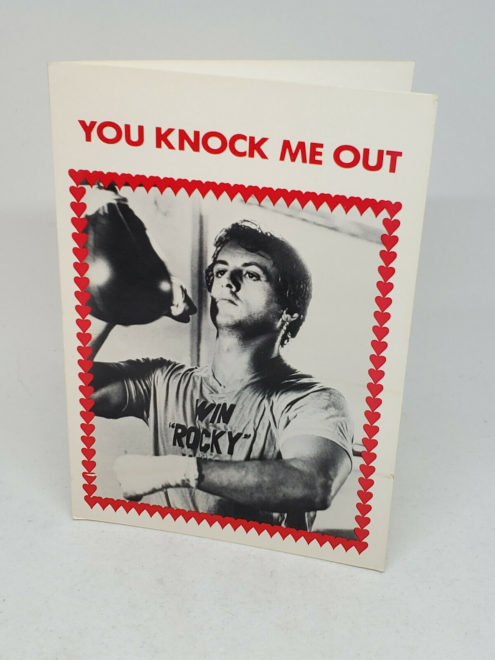 The momentum continued into the following decades with advances in existing design styles such as embossed paper developed in the late 18th century. As the Industrial Revolution moved forward, the quality time in people’s lives began to dissipate, leaving them with little energy to devote to handmade cards. People soon became accustomed to buying cards.

Moving into the 20th century, styles became more elaborate by incorporating layering with ribbons, tassels, and unique dimensions. The growing trend of purchasing over making Valentine’s Day cards by hand led to publishers purchasing smaller firms and mass-producing cards, but no company would be able to compete with Hallmark after it entered the greeting card industry in 1910.