Falls Bridge and Seven Locations Added to the Philadelphia Register 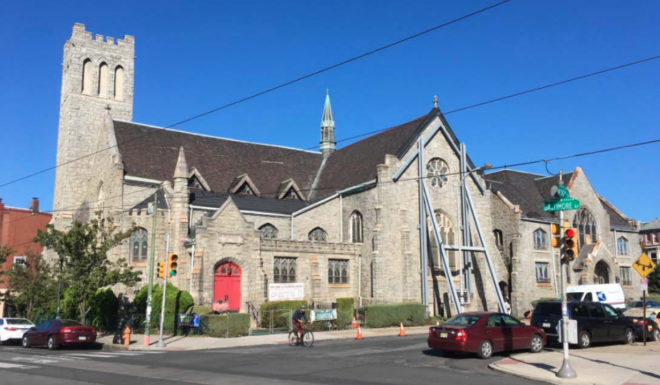 On Friday, January 14 the Philadelphia Historical Commission held its first meeting of 2022. Eight locations up for designation were added to the Philadelphia Register of Historic Places with unanimous consent.

The meeting began with an unusual request to have Hickman Temple removed from consideration. The African Methodist Episcopal Church at 50th Street and Baltimore Avenue was nominated by the University City Historical Society. The nominator, the Preservation Alliance for Greater Philadelphia, and staff of the Historical Commission all supported the motion out of respect for the church leadership, which opposed the designation.

The congregants of Hickman Temple, who have been meeting in the historic, stone church for over 40 years, recently decided to downsize to a smaller and more manageable space. Since many members of the church have moved further into Southwest Philadelphia, the church would like to relocate to be closer to its members. The sale of Hickman Temple would fund the purchase of a new site, and the church leadership felt that the nomination will decrease the potential value of eventual sale offers. The Preservation Alliance offered to step in to find a buyer interested in preserving the building.

The Historical Commission voted to remove the nomination from consideration, even though that risks the sale of the building to a developer who could potentially demolish the church for new construction. The hope of the University City Historical Society is that the nomination will be reconsidered after the sale to a preservation-oriented buyer occurs. 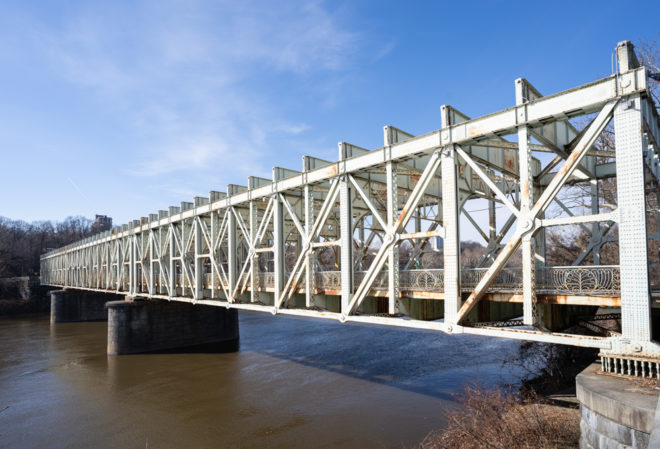 First up for designation consideration was Falls Bridge, nominated by the East Falls Historical Society. Built in 1894 and designed by George S. Webster, the structure  uses a variation of the Pratt Truss called the Baltimore Petite Truss. The Petite Truss is much stronger than a standard Truss bridge due to additional auxiliary sub struts, making the Falls Bridge unusually large and heavy for a bridge of its size.

The notable muscular span was a result of both civic determination and ambitious design. Starting in 1808, a series of six bridges were constructed on the site where Falls Bridge now stands, and each collapsed due to flooding and storms. Philadelphia’s chief engineer in 1894 was not going to let a seventh bridge fail. Additionally, the bridge was originally designed to support two decks of traffic, but the upper deck was never completed due to lack of funds. Intended to carry a double-track streetcar between two lanes of traffic, the heavily reinforced upper deck was strong enough to bear the  transition from horse-drawn traffic to motorized vehicles, which weigh a significant amount more.

The bridge is notable for its intricate wrought-iron railings, which have decorative “tree of life” motifs. The metalwork was once painted in four colors (white, buff, brown, and red) demarcating different structural functions, but has been a uniform light green for many years. 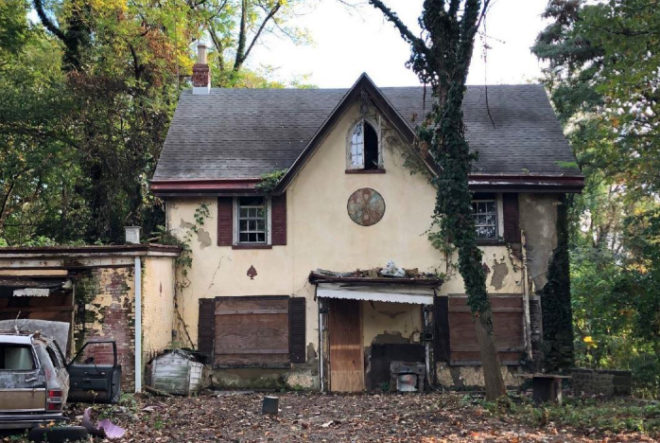 Next up was the Alexander Henry Carriage House and Stable, nominated by The Keeping Society of Philadelphia. The two-and-one-half story Gothic Revival-style cottage was constructed at some point between 1853 and 1875 and served as the carriage house of a large School House Lane home. The Alexander Henry estate, which has subsequently been subdivided into many parcels, is still largely intact. As the nomination describes,  “An interesting and distinctive feature is the use of the pointed arch window in all four of the gable ends of what appears to be a third, half-story attic level of the building. This is a fairly unusual Gothic Revival design to survive in Philadelphia.”

The Carriage House was given as a gift to the estate’s chauffeur and has passed through three generations of family ownership. The structure, which is in poor condition, is currently undergoing conservator action in court. The nomination, passed by unanimous consent, was filed before conservatorship action was sought and will not be affected by the conservatorship action.

Ronaldson’s Philadelphia Cemetery, nominated by Celeste Morello, was next to be approved for designation. The cemetery, established in the 1827 by James Ronaldson, was not associated with a church and was established to be a nonreligious, but still respectable, middle-class burial ground. The price for a plot was between $26 and $30. 123 years after opening, the City turned the cemetery into the present day Frank Palumbo Recreation Center and Playground. 13,500 graves were exhumed and most were reinterred at the Forest Hills Memorial Park Cemetery. While the tombstones and cemetery structures have long been destroyed, the Historical Commission decided that the site holds strong historic value both because of the high likelihood of graves still present on the site and as an example of the common “cemetery to park” trajectory in Philadelphia and much of the eastern United States. The former cemetery was added to the Philadelphia Register by unanimous consent. 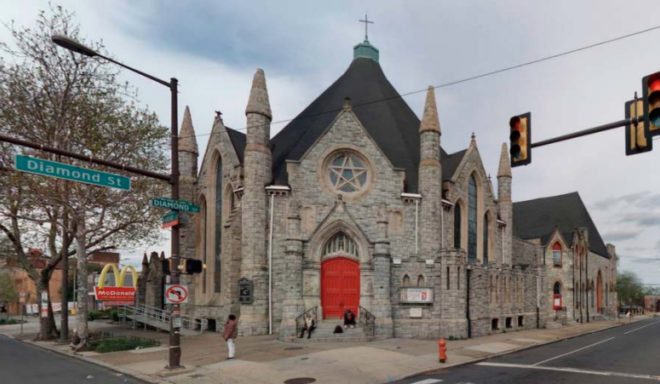 The growth and transformation of the church and its congregation exemplifies the development of North Philadelphia from the mid-19th to mid-20th centuries. Bethlehem Presbyterian’s congregation built their church during a time of extreme growth in Philadelphia’s population, which they matched architecturally. In the first 20 years of the church’s existence, beginning in 1867, the congregation expanded from a small wooden church structure, to a second stone structure, to a Sabbath school and new church, and finally to the current church building. The architect, Theophilus Parsons Chandler, Jr., was a well-respected Philadelphia ecclesiastical architect. In the 1950s, as white flight changed North Philadelphia’s racial demographics, many established congregations merged with suburban congregations, and Bethlehem Presbyterian’s congregation merged with Holy Trinity Church in the Logan neighborhood. At this time, Berean Presbyterian Church, previously located at 1924 S. College Avenue and a predominantly Black congregation, relocated to the church building. The church complex was added to the local register by unanimous consent. 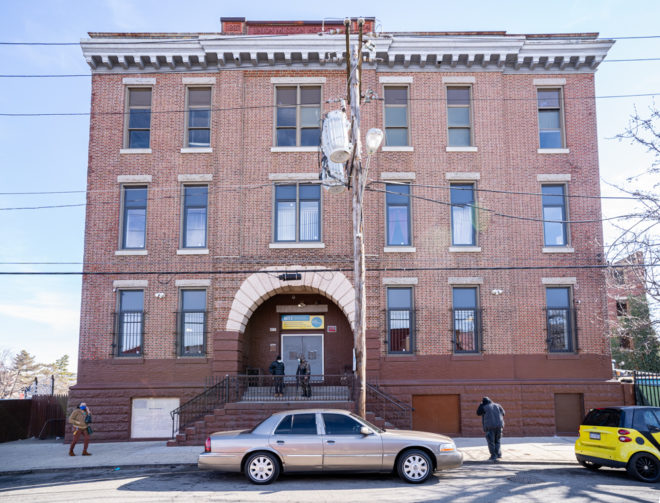 Stetson Hospital, built in 1903 and designed by Ballinger and Perrot, was nominated by Steven Pietzman. The hospital is U-shaped in plan, with two matching three story blocks. The handsome, red brick structure, with an impressive arched frontispiece, was constructed at the behest of John B. Stentson for use by his factory workers, their families and neighbors, and is a prime example of “benevolent feudalism” in industrial Philadelphia.

The Stetson Company was once the largest hat manufacturer in the United States, with a factory complex of over one million square feet. The company hospital merged with nearby St. Luke’s Hospital, then closed permanently in 1971 when the Stetson plant went out of business.

In 1977, the Stetson Hospital property was deeded along with the rest of the Stetson complex to the City for one dollar. The City then demolished most of the Steston complex and converted Stetson Hospital into a drug rehabilitation center. After arson at the site in the 1980s, the hospital is the only building left standing of the historic Stetson industrial complex.

In a touching twist, the architect David Traub who designed the renovation in the 1970s was present at the meeting and heartily supported the nomination, saying he enjoyed working on the building with its archetypical “industrial paternalistic sensibility.” Stetson Hospital was designated by unanimous consent. 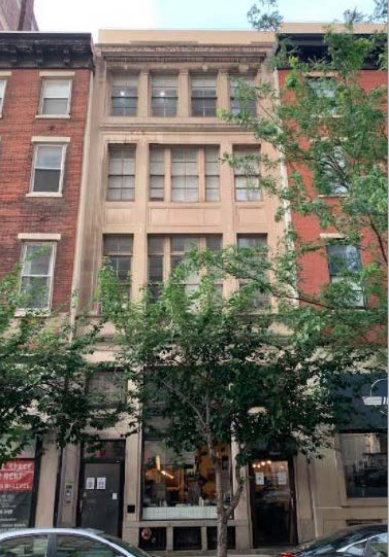 The Shimwell & Logan Building was nominated by the Center City Residents’ Association and Oscar Beisart. Originally built in the Italianate style during the mid-19th century, the four-story masonry commercial building was redesigned with a Classical Modern facade for the Shimwell & Logan Optical Company in 1921 by architect Ernest H. Yardley. Acording to the nomination, the limestone facade typifies the “restrained Palazzo style reflective of the interwar years.” The building’s first floor passed through various commercial hands, including the Swiss Pastry Shop, the Coronet Hat Shop, and the March of Dimes. The owner, 1935 Chestnut St. LLC, was not present at the meeting. The building was approved for designation by unanimous consent. 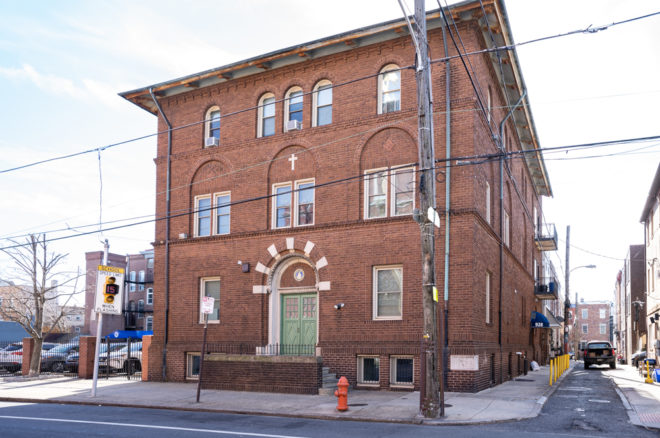 The Madonna House, built in 1923 by Charles J. Cummisky, was nominated by Celeste Morello. The three story brick masonry building was once a Catholic settlement house serving new Italian immigrants. The design, notably its deep overhanging eaves, flush facade, rounded arches, and rectangular plan, was styled to emulate a Florentine palazzo. 20th century Philadelphia was home to numerous settlement groups serving immigrants in the region, but very few of these buildings survive today. The Madonna House also represents the thriving “Little Italy” that once existed in the neighborhood. The owner, James Campenella, did not attend the meeting. The building was placed on the Philadelphia Register by unanimous consent.

The Gardener’s Cottage of the Lewis and Martha Taws Estate was nominated for historic designation by West Central Germantown Neighbors. However, the Gothic Revival style cottage “nestled within a distinctive 19th century vignette of ancillary suburban estate buildings [with] features that conform to a Romantic ideal in architecture and the Picturesque in landscape,” was not discussed on the basis of its historic merit at the meeting.

On October 4, 2021, the current property owner of Taws cottage, Conarroe Jawn LLC, applied for a demolition permit with the Department of Licenses and Inspections (L&I). Historical Commission staff notified the owner of the nomination and pending meeting on October 28. According to L&I and the Philadelphia Law Department, since the permit was filed before the notice was officially delivered, the Historical Commission will have no sway over this permit if it approves the building for designation, only forthcoming permits. Since the permit in question is for the near total demolition of the structure, the Historical Commission decided to postpone consideration of Taws Cottage until March when the fate of the demolition permit will be known.

The meeting ended with the removal of three sites from the Philadelphia Register, initiated by Historical Commission staff in an effort to “clean up” the local register. The buildings had all been lost to fire or demolition and only the lots remain. All were removed by unanimous consent. 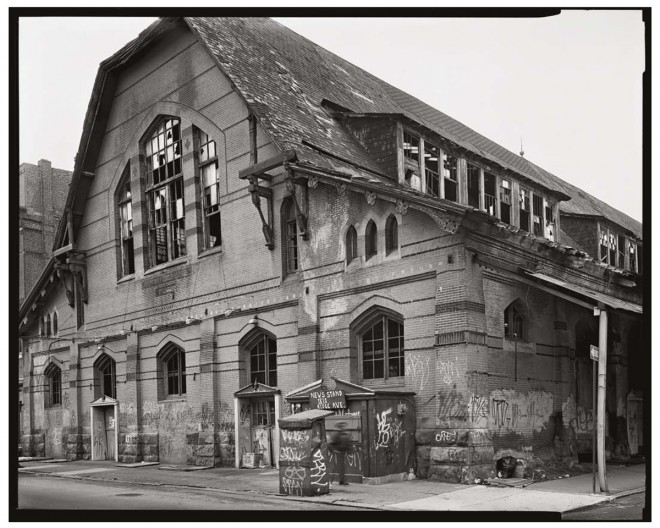 The Ridge Avenue Farmers Market in Francisville was a one-story brick masonry structure, with an open, wooden truss roof and gothic style arches. The building, constructed in 1875, served as a covered farmers market and operated for two generations by the Webster family. The building suffered damage from a fire in the 1950s, but was added to the National and the Philadelphia Register of Historic Places in 1984. In the winter of 1997, winter storm conditions caused much of the remaining building to collapse, and what was left was demolished by L&I shortly thereafter. The lot has been regraded and currently stands empty. 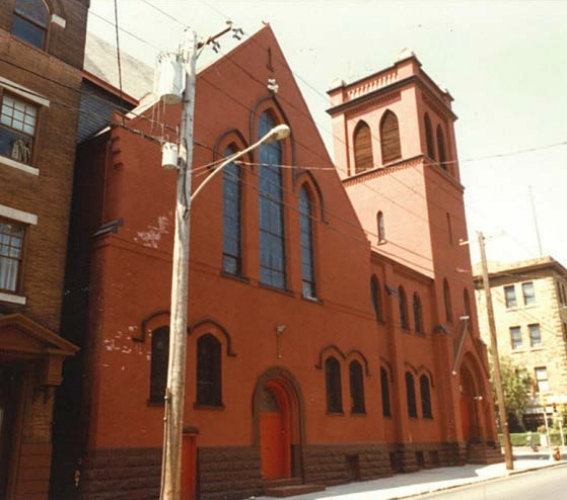 Seventh Day Adventist Church, built in 1893 by architect Frank Watson, was a stately brick church. The Historical Commission designated the property at the southeast corner of 16th and Oxford Streets on July 1, 1982 along with several other buildings on the 1500 block of N. 16th Street.

In 1991, a fire broke out, purportedly started by workers using a propane torch to install a new roof. The blaze destroyed much of the building, and the rest was demolished. A new church was built at the site in late 1998, with no involvement from the Historical Commission. It was designed with no aesthetic or historic relationship to the former church. 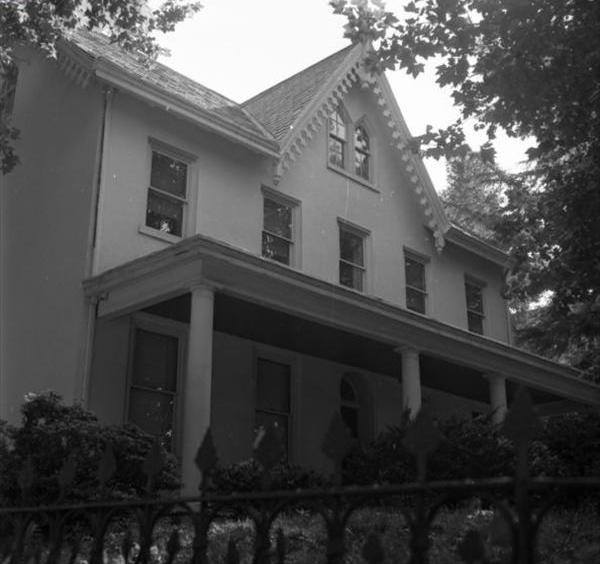 1725 W. Tioga Street in 1971. | Image courtesy of the Philadelphia Historical Commission via PhillyHistory.org

The Gothic Revival house at 1725 Tioga Street, a mid-19th century home in the historic village of Kenderton, was added to the Philadelphia Register in 1971. Very little information about the structure is available, as the Historical Commission’s minutes from the meeting at which the property was designated provide no information about the property and no clues regarding its significance. An unsuccessful 1983 permit application seeking to use the building as a rooming house was later followed by a 1986 permit application from Excalibur Nursing Home, Inc. that sought unsuccessfully to convert the dwelling into a home for the elderly. In the 1990s the building was demolished due to disrepair. A parking lot currently occupies  the site.