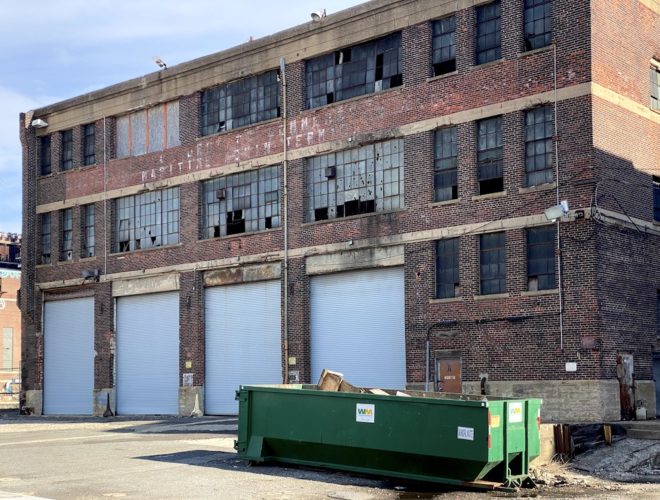 A ghost sign is still legible on the Columbus Avenue-facing entrance of Pier 98, part of the old Federal Maritime Terminal. PhilaPort recently listed Piers 96, 98, and 100 for sale. | Photo: Michael Bixler

Pier 38 and 40 are not the only properties PhilaPort has for sale. The Port Authority has recently listed Piers 96, 98, and 100 as available for development, and their story dates back a century. These three piers once constituted the Federal Maritime Terminal, known variously as the Philadelphia Army Supply Base, the US Government Quartermaster Depot, and the Philadelphia Tidewater Terminal. They were constructed during the feverish building boom that accompanied the United States entry into World War I.

Hog Island Shipyard is the Delaware River waterfront’s most famous federal creation, but there were other mammoth additions, including the first buildings of the Defense Personnel Support Center on Oregon Avenue in a farming area once known as “The Neck” and the warehouses at the foot of Brown Street built on lands formerly used as lumber yards for nearby piers. None of these piers were completed in time to make any fruitful contribution to the war before it concluded in an armistice on November 11, 1918, thankfully much sooner than War Department brass had anticipated. Hog Island Shipyard delivered its first vessel three months before the war ended. 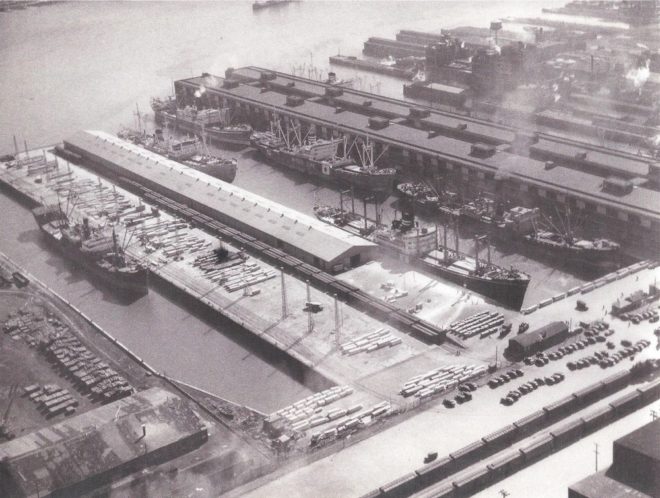 Before containerization revolutionized the shipping industry in the 1960s, waterborne cargo was handled in the Port of Philadelphia through finger piers owned either by the City, the railroads, or, in this one instance, the federal government. Some small piers used for coastal shipping were also owned by stevedoring companies, and the oil refineries had their own terminals. The Pennsylvania Railroad and the Reading Railroad each had proprietary piers for handling bulk cargoes. Materials were either pumped, dumped, or poured, such as wheat, coal, and ore. They also maintained piers for general, or break-bulk cargo, which competed with the City piers built by its Department of Wharves, Docks, and Ferries. The Federal Maritime Terminal’s size dwarfed the railroad and City general cargo piers.

In contrast to the City’s piers, where head houses and pier head facades displayed Beaux Arts grandiosity, the Federal Maritime Terminal’s Pier 98 was about as utilitarian in its appearance as a prison cell block. Pier 98 was completed in 1918 and is bigger than any other pier ever built in Philadelphia. At 1,500 feet long, it was nearly double the length of the port’s next largest pier at that time. It had three decks to Pier 78’s two, 292,000 square feet of interior space in its twin transit sheds eclipsing Pier 78’s 132,000 square feet. Pier 98 was served by railroad tracks running its entire length in the open air corridor between its two transit sheds. It also had tracks along its northern wharf. Pier 98’s companion, Pier 96, was constructed as an open deck structure and remained without a transit shed until 1935. The shed has since been removed. Pier 96 was also equipped with railroad tracks connected to those in the bed of Delaware Avenue. For many years its one story shed was used as a warehouse for Mummers equipment. Pier 96’s open deck was often used for transhipping vehicles. At full capacity the three piers could berth 15 ships simultaneously. 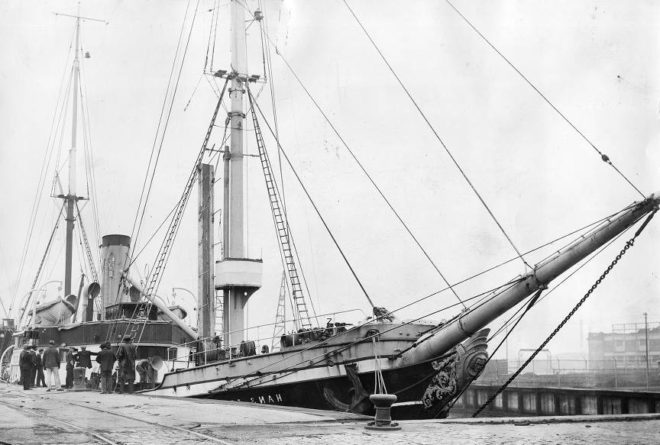 Pier 98 was also provided with an annex of 25 acres west of Delaware Avenue designated as a lumber concentration yard, replacing the ones taken for construction of the Quartermaster warehouses at Brown Street.

During World War II the federal government added Pier 100 to this complex, carving out an open deck wharf facing Pier 98 from the adjacent Publicker alcohol refinery. During the last year of the war Pier 98 was staffed with German prisoners of war, survivors of General Irwin Rommel’s Afrika Korps who had been confined at Indiantown Gap Military Reservation in Central Pennsylvania. They were offered wages to work at the terminal and were housed under guard on the transit sheds’ top decks, working as longshoremen on the lower decks. 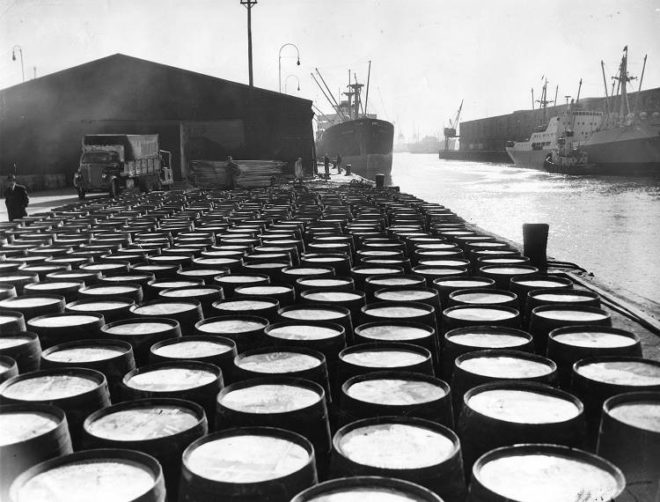 Following World War II the federal government leased out this complex to stevedores, the Rainbow Terminal Corporation, and later J. A. McCarthy, Inc., which subleased out the uppermost decks for warehousing. At that time it became known as Philadelphia Tidewater Terminal. The City became  concerned that the federal government would declare the complex surplus and auction it off to a buyer interested only in its warehouse reuse potential. This would be a major setback to the port as Piers 96, 98, and 100 accounted for between 25 and 35 percent of the port’s general cargo commerce. Therefore, the City negotiated the purchase of the piers in 1960. This major addition to the City’s inventory of port facilities, and the need to do something about the rapidly evolving containerization of freight, led the City to team up with the Philadelphia Chamber of Commerce to replace the Department of Wharves, Docks and Ferries with the Philadelphia Port Corporation in 1965. 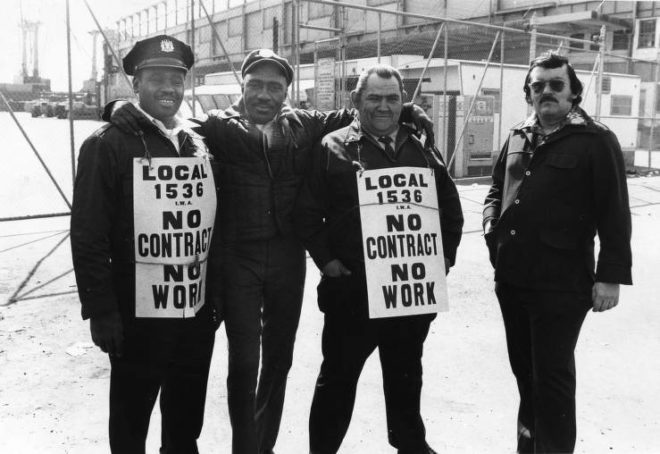 Striking watchmen picket outside of Pier 98 in 1976 grinding activity to a halt in the Port of Philadelphia. | Image courtesy of Temple University Libraries, Special Collections Research Center

By 1980, Pier 98 had become obsolete. Piers are designed to have heavy floor load-bearing capacity. The dense columns built into Pier 98’s lowest decks to support its two upper decks created a maize of obstacles that were a nightmare for cargo handlers. Cargoes not shipped in containers, such as cocoa beans, paper, and steel, shifted to the Philadelphia Port Corporation’s other piers like Pier 38 and 40, and the pier was closed.

The Philadelphia Port Corporation’s release of Piers 3 and 5 for residential conversion caused a seasonal scarcity of berths and wharves to handle the port’s cocoa bean imports, and Pier 98 was pressed into this occasional service as a last resort in the 1980s. 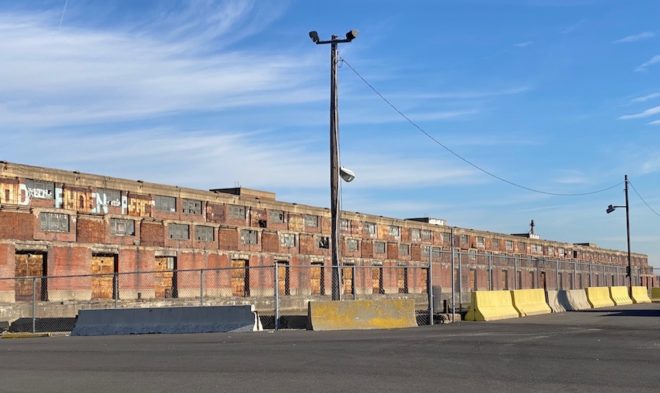 The Tidewater Terminal is zoned I-P, a Port Industrial District, intended to accommodate marine-related industrial uses such as docks, wharves, piers, and transit sheds. Unlike Pier 38 and 40, the terminal’s surroundings do not suggest higher and better uses. The PhilaPort Development Plan calls for expansion of the nearby Packer Avenue Marine Terminal, the region’s largest container facility, northward on 40 acres approaching the Tidewater Terminal. What had been Pier 98’s annex is now part of PhilaPort’s auto import-export terminal. To Tidewater Terminal’s north, it is bordered by the long vacant PECO Southwark Generating Station, a handsome Paul Cret-designed 1947 creation slowly crumbling away on its 62-acre site. Finding a viable reuse for the Tidewater Terminal could be an interesting task for university design studios. Perhaps the reuses found for former federal piers in Brooklyn can point the way forward.