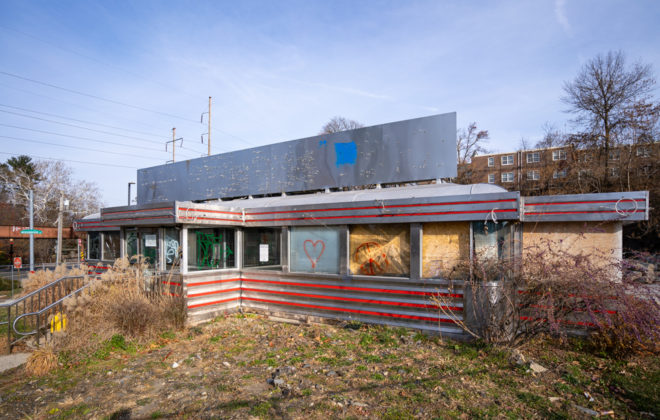 The Trolley Car Diner was a much-loved, culinary hot spot of Northwest Philadelphia for 20 years. Real estate developer Ken Weinstein closed and sold the restaurant in 2019, and plans for the property are currently going through the design process. The old Mountain View Diner from Wilkes-Barre currently sits abandoned. | Photo: Michael Bixler

Until a few years ago, as you traveled along Germantown Avenue from Mount Airy heading into Chestnut Hill you would round a bend in the cobbled-and-tram-tracked road and be greeted by two visions of the past: a 1950s stainless steel diner and a 1940s trolley car.

The Trolley Car Diner and Ice Cream Shoppe were a project of Ken Weinstein, president of Philly Office Retail, the development and property management company active in Germantown. In 2000, he had the diner building transported to Philadelphia from Wilkes Barre, Pennsylvania to the site at 7619-25 Germantown Avenue that was previously a quarry, then a Gino’s Hamburgers, followed by a Roy Rogers restaurant.

Manufactured by the Mountain View Diner Company, the streamline eatery was joined three years later by a 1948 PCC trolley. Its Presidents’ Conference Committee design was a popular model of streetcars and trams throughout North America for over two decades beginning in the 1930s. More than 500 cars manufactured in this style were operated by the Philadelphia Transportation Company (PTC), the privately-owned precursor to SEPTA.

For nearly 20 years the site was a quirky and beloved landmark for many in the neighborhood.  When Weinstein announced the beloved diner’s closure in October, 2019, it came as a surprise to many, given his high profile support of preserving old buildings and adaptive reuse.

The current owners, Main Street Development and Blake Development Corporation, both based in Montgomery County, are planning a mixed use, five-story project that will include 114 apartments and 6,654 square feet of commercial space. The plans fall under the by-right allowances for the site, plus a couple of bonuses.

Its CMX-2 zoning permits a maximum height of 38 feet, but the plan added a seven-foot bonus by setting aside 10 percent of the units as “moderate income,” for a total of 45 feet.

The real estate partnership also received bonuses in the number of units allowed by both the moderate income set-aside and the inclusion of a green roof.

In September 2021, the Mount Airy Business Improvement District, a Registered Community Organization (RCO) for the area, held a meeting for the developer to present the plans to the RCO and the public to weigh in. It was followed by a Civic Design Review (CDR) on December 7.

At both meetings, some area residents pushed back against aspects of the plans, most vehemently about parking, traffic, the building height, and what some see as an encroachment of apartments in their view of the neighborhood as one of single family homes.

Charles Richardson, representing Councilmember Cindy Bass, in whose district the project lies, agreed that the building was too large for the site and the area and expressed concern about the dangers of vehicular traffic at the location.

Preservationist Oscar Beisert, who resides in Mount Airy, stated that the size of the building intruded on the scale of the surroundings, but acknowledged the plans are permitted by-right. Another concern of his involved the building’s facade. “This is essentially a Wissahickon Schist district,” he said, referring to the native, silvery-grey rock infused with sparkling quartzite that graces hundreds of homes in Mount Airy and Chestnut Hill. The design of the development proposes modern fabricated materials like grey steel and variegated black composite bricks.

The CDR concluded its review of the project and suggested the developer adopt the Planning Commission staff’s recommendations, which includes setting the building further back from the street to allow more open space. Since the CDR only addresses the design of a project, other issues remain to be resolved in other forums. 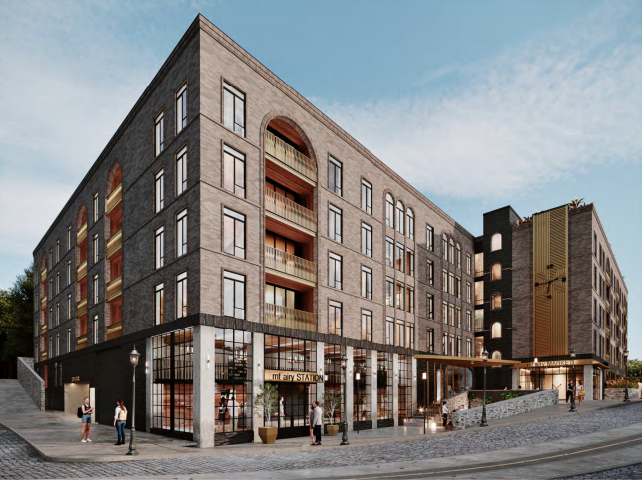 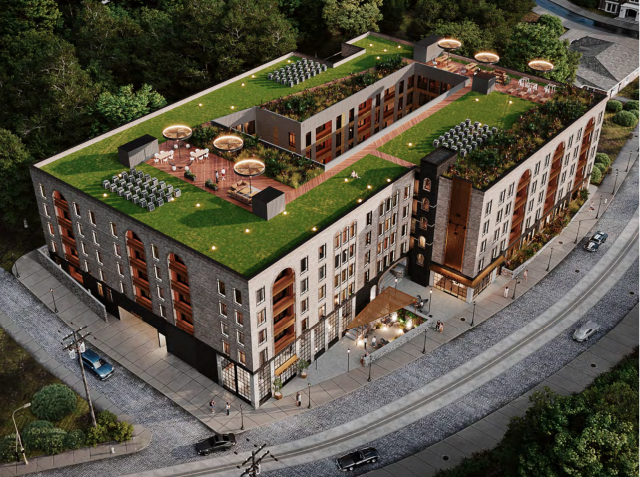 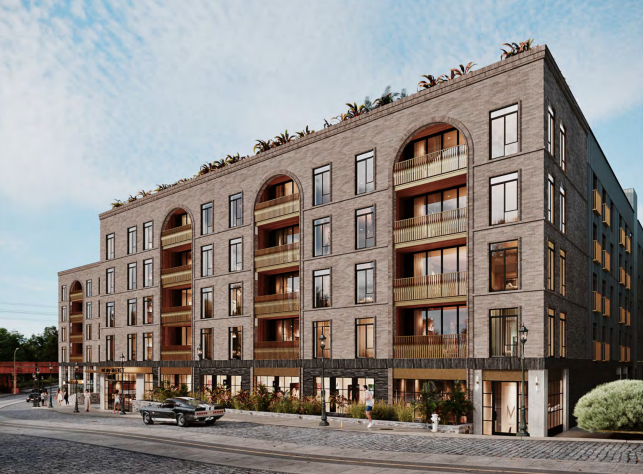 The site is located at a spot where Germantown Avenue separates the Cresheim Trail on the west side from a PECO right-of-way on the east that is a popular, albeit unofficial, walking trail that extends to Stenton Avenue at the city’s edge. A few years ago, the City entered into a 25-year lease agreement with PECO for the latter and purchased a train trestle that spans Germantown Avenue at that location. When complete, the Cresheim Trail would connect to Montgomery County’s parts of the Circuit Trails, a 750-mile network of multi-use trails planned for the Greater Philadelphia region.

“The City has a long range plan of utilizing it for trail access,” said Maita Soukup, spokesperson for Philadelphia Parks and Recreation. “However, at this time there is no funding currently available for the rehabilitation project to proceed.”

She says her group plans on asking the developer to help fund the bridge construction, noting that other sources could include the Delaware Valley Regional Planning Commission’s Regional Trails Program, funded by the William Penn Foundation, and the state’s Redevelopment Assistance Capital Program. 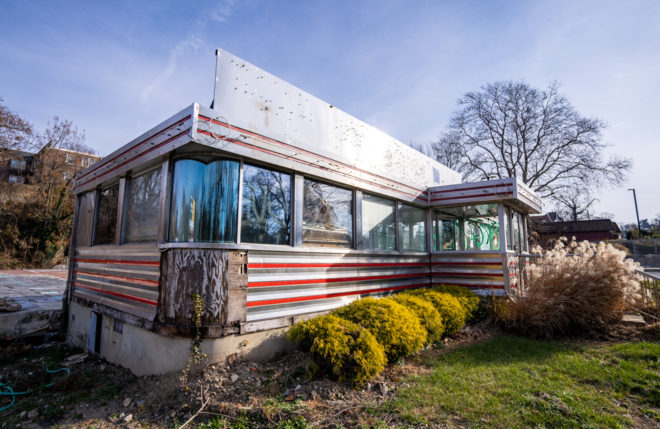 Although a demolition permit is currently posted on the door of the former Trolley Car Diner, an attorney for the developers has stated that they are currently looking to donate the building. Until then, the diner continues to deteriorate due to neglect and vandalism. | Photo: Michael Bixler

Although the salmon omelettes and ice cream sundaes are gone, a few aspects of the Trolley Car Diner remain. In July 2020, Weinstein held a contest in which nonprofit organizations could submit proposals for a creative and impactful reuse for the trolley car. He donated it to the winner, the Fishtown Kensington Area Business Improvement District. The group planned to move it to the courtyard outside of the Fillmore Philadelphia music venue at 29 East Allen Street, intending for it to again house an ice cream shop. But like many pandemic-related delays, “It’s still in storage,” reported Executive Director Marc Collazzo. “In some ways, the delay has helped,” he said. “Since then, the area has blossomed with a bowling alley, new restaurants, and a golf simulator.”

Although the BID will retain ownership of the shop, Collazzo has partnered with two social service organizations in the neighborhood, Lutheran Settlement House and Impact Services, for staffing, to provide training and jobs to their clients.

Another facet of the Trolley Car Diner lives on. About a decade ago, Weinstein established the Trolley Car Teachers Fund, which provides grants up to $500 to Philadelphia public school teachers, who often pay for supplies out of their own pockets. The fund is now administered by Weinstein’s Philly Office Retail. “The Teachers’ Fund granted more than $15,000 this year,” Weinstein said. “We felt it was important to continue these grants to public school teachers.”

As for the classic diner building, demolition permits have been issued, and work to destroy it can legally begin in December, but it may have another road trip in its future. “The stainless steel diner remains,” noted Ronald Patterson, attorney for the developers. “We are working on the donation of the existing structure.”