Editor’s Note: A version of this story was published in the Spring 2021 issue of Extant, a publication of the Preservation Alliance for Greater Philadelphia. 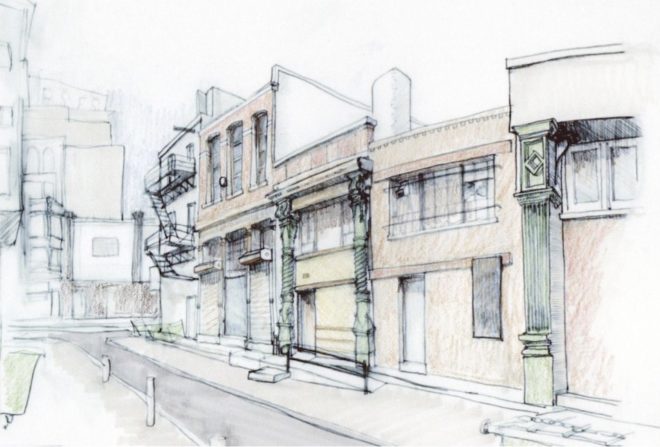 You’d be forgiven if you have never strolled down De Gray Street, a dark, narrow, dead-end alleyway stretching a mere quarter block east from 10th Street just south of Market. But for connoisseurs of the overlooked and unexpected, De Gray is unlike anything else in Center City. Behind the requisite scrum of dumpsters and other urban detritus, the alley is home to an unlikely cluster of 19th century relics–the surviving rear facades of a once-opulent row of Victorian lofts that formerly fronted the 900 block of Market Street. This ramshackle warren still boasts many of the structures’ original, ornate details, long since disappeared from the truncated and re-clad Market Street fronts, including an incredible pair of swizzle-stick cast iron columns that originally graced H.O. Hurlburt & Sons’ watch and jewelry showroom. Sundry alterations and degradations may make De Gray Street an unlikely candidate for the Philadelphia Register of Historic Places. But that’s no reason not to marvel at the perseverance of this rare vestige of Victoriana and to imagine its future potential in a 21st-century Market East.