Philadelphia prides itself on being a city of homeowners, and it has been for generations. This phenomenon extends across all demographic groups—nearly half of Black households here (48 percent) own the homes they live in, the highest rate of any of the largest U.S. cities.

For most American families, the greatest share of household wealth comes from homeownership. Now, a new study by the Pew Charitable Trusts Philadelphia Research and Policy Initiative examines a threat to the safeguarding of a home’s assets that can lie hidden for years.

“This study is a part of a broader look at housing affordability,” said Octavia Howell, manager of the initiative. “We know that homeownership plays a huge role in wealth accumulation, but up until now, we’ve had limited data.”

The study examined the phenomenon of a “tangled title.” It is when the ownership of a property isn’t clear, because the name on the deed is not that of the apparent current owner. Pew estimated there are over 10,000 such properties in the city of Philadelphia, or about two percent of all residential properties. Although the percentage seems small, the aggregate assessed value of those properties is over a billion dollars.

The most common way a title becomes tangled is when a property’s owner dies and the person who inherits the property fails to record a new deed, or in the absence of a will, it is unclear who the heir is. Other situations that can lead to a tangled title include an improperly recorded deed transfer, abandoned properties, a seller’s reneging on a rent-to-own agreement, and deed theft, where the record owner’s signature is forged, or they are deceived into signing a transfer.

Titles are transferred with the Register of Wills through the legal process called probate, which can be more complicated and costly if there isn’t a will, or if a long time has elapsed since the death of the owner of record. The study estimated the average cost of probate is $9,200, consisting of fees for attorneys, recording the new deed, and the probate fee, along with required advertising and inheritance tax.

For low income residents, probate fees can be daunting, but the long-term costs of tangled titles are much greater. “With a tangled title, in most cases, one can’t sell the home, take out a home equity loan, obtain homeowner’s insurance, or participate in city home repair programs,” explained Howell. “And most people face obstacles in participating in city relief programs for homeowners struggling with real estate taxes or water department charges.” This can bring on the risk of deterioration of the property and even foreclosure.

Tangled titles exist in every part of the city. “The largest numbers are in North, Upper North, Southwest, and West Philadelphia,” noted Howell. “Together they account for more than half of all tangled titles in the city, even though they contain only about a third of the city’s residential properties.”

The census tracts with the highest prevalence of tangled titles are also those with the lowest incomes and highest poverty rates. So while the median assessed value of the tangled title properties in these areas is lower than the city’s average, they nonetheless represent hundreds of millions of dollars of potential wealth that some of the city’s neediest residents are missing out on.

Neighborhoods with higher percentages of tangles tend to have predominantly Black populations. Some have been experiencing gentrification. “Often, the areas where you have high Black home ownership have experienced disinvestment,” said Howell. “Now, with increasing investment in many of those areas, property values are rising. Homeowners with tangled titles are at risk of not being able to tap into that increased wealth, whether by gaining access to funding to maintain and improve the property or by selling it and receiving the funds.” 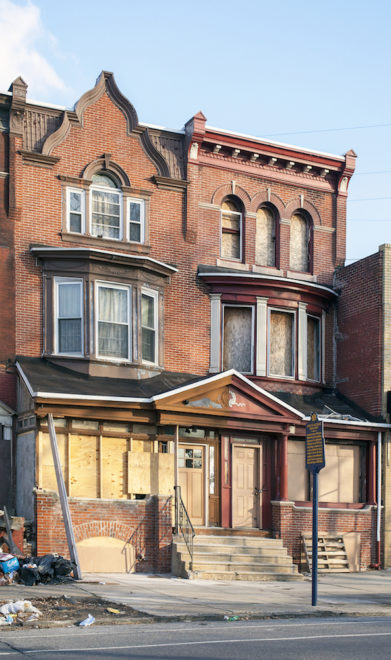 The John Coltrane House, a National Historic Landmark in Strawberry Mansion, has suffered from neglect in recent years due to confusion over ownership because of a “tangled title.” | Photo: Peter Woodall

A well-publicized example of a tangled title is the John Coltrane House in Strawberry Mansion, which preservationists, community activists, and jazz enthusiasts have been wanting to restore as a tribute to the jazz great and as a neighborhood asset. Their efforts have been thwarted by the deed that still bears the name of the fan who bought the house from Coltrane’s widow Alice and cousin Mary Alexander, but who passed away in 2007.

Beyond the hardships that individuals experience, it is also detrimental to neighborhoods and the broader community. Tangled titles can lead to property deterioration and even abandonment when the occupants lack access to funds for maintenance. David Perri, former commissioner of the Department of Licenses and Inspections, told the researchers that in recent years almost all building collapses in the city that were not construction related were caused by a lack of maintenance, many of which had tangled titles.

While correcting a tangled title is the individual’s responsibility to initiate, there are some resources available if the costs are beyond their means.

Organizations such as Community Legal Services, SeniorLAW Center, and Philadelphia Legal Assistance and attorneys working pro bono through Philadelphia VIP can assist low-income residents. The city has a Tangled Title Fund administered by VIP that can help with some expenses that cannot be waived, like the real estate transfer tax or the cost of required newspaper advertising.

Tracey L. Gordon, the Register of Wills, has launched a pilot program for low income residents, the Probate Deferment Initiative, where, rather than collecting the probate fee during the process, it’s recorded as a lien against the property that defers payment until the property is sold.

Recently, City Council members Katherine Gilmore Richardson and Jamie Gauthier, chair of the Committee on Housing, Neighborhood Development, and the Homeless, introduced a resolution that calls for Committee hearings to explore the issue of tangled titles. Gilmore Richardson also introduced the Tangled Title Disclosure Bill, legislation that would require funeral homes to share information, provided in partnership with the Department of Records and Register of Wills, about probating estates and avoiding tangled titles when they provide a death certificate to surviving family members.

Those in the business of deeds and property transfers can play a role, too. “When you take a property listing, you need to clarify who the owner is,” explained realtor Chris Somers, CEO of The Somers Team and a partner with KW Philadelphia. “The questions start to come in—did you inherit the property? Was there a will? If not, maybe you don’t actually own it. A property could still settle, but there’s extra work to be done.”

Others have to be watchful, too. “Often, if the title insurance company sees a one dollar sale, they’ll reach out to the buyer and the seller to have them sign off on it,” said Somers. “The notary needs to be on guard, too.” Another watchdog is Philadelphia’s Department of Records, which offers a service called Fraud Guard to alert homeowners of possible deed theft, sending an email alert when their name appears in a recorded transaction.

Somers sums up a three-pronged approach to help mitigate the problem of tangled titles: “Rule #1: a buyer should always get title insurance. Rule #2: realtors need to do due diligence ahead of settlement and understand the ownership situation of the property. Rule #3: the City and neighborhood organizations need to educate homeowners that there are resources available to rectify these tangled titles.”

On that third point, Gordon is on an educational mission she calls “Plan. Prepare. Protect.,” speaking at civic associations, hosting press conferences, and posting videos on social media to inform residents about the need for wills and deed transfers.

In addition to preserving individual wealth, Pew’s Octavia Howell stresses that the effort to resolve tangled titles is crucial to preserving Philadelphia’s housing stock and neighborhood quality. “This is an issue that impacts the fabric of our city.”