One of Philadelphia’s salient features is the grid pattern of our streets as originally laid out by William Penn and Thomas Holme. There are, though, some major thoroughfares that deviate from the norm. Ridge Avenue, Germantown Avenue, and Passyunk Avenue interrupt the orderly Philly lattice. Each of these roads share something in common: they were originally Indian trails that had been established long before William Penn or any other Europeans had come to this land. Although Philadelphia’s population today is only .36 percent Native American, our land was once home to a flourishing and expansive Indian community.

In January 2020, the Museum of Indian Culture in Allentown opened a Historic Preservation Office to help members of the Delaware Nation connect to their ancestral homeland. To celebrate this event, a map of the Delaware Valley prior to European settlement was driven from Pennsylvania to the Delaware Nation, now based in Oklahoma. Photos of the map intrigued me, so I set out to learn more about its origins and purpose. 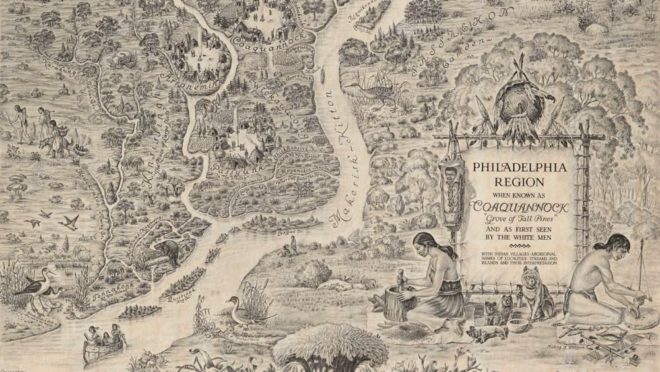 The Works Progress Administration published the little-known Coaquannock map in 1934. | Image courtesy of the Historical Society of Pennsylvania

The full title of the map recently gifted to the Delaware Nation is Philadelphia Region when known as Coaquannock “Grove of Tall Pines” AND AS FIRST SEEN BY THE WHITE MEN. WITH INDIAN VILLAGES, ABORIGINAL NAMES OF LOCALITIES, STREAMS AND ISLANDS AND THEIR INTERPRETATION. The Historical Society of Pennsylvania has three original copies of the map, and I recently visited their reading room to take a closer look.

An inscription below the map indicates that it was published in 1934 and had been prepared using funds from the Works Progress Administration (WPA), a New Deal program to maintain employment during the Great Depression. Given the bibliography below the map and the precise line drawings, it was likely a project designed to give paid work to historians and artists. The copyright, for reasons I have been unable to discover, belongs to the Philadelphia City Planning Commission.

The map is a fascinating document and can be accessed online HERE. It shows the homeland of the Lenape, the people who lived in Eastern Pennsylvania, New Jersey, Southern New York, and Delaware for thousands of years. They were the first Native Americans to interact with 17th century Dutch, Swedish, and British settlers. Although they called themselves the Lenape, translated as the Original People, the tribe became known as the Delaware since they lived on the banks of the river that the British named for the governor of Jamestown, Lord de la Warr. Today, the terms Delaware and Lenape are used interchangeably.

The map’s meticulous line drawings render the Indians in a respectful manner. In the bottom right-hand corner, where the map’s title is found, a Native American man is making wampum, while a woman is shown grinding corn as her baby sleeps nearby in a papoose. Several men are depicted paddling a canoe. Others are in their small wigwam villages concentrated in the center of the map. 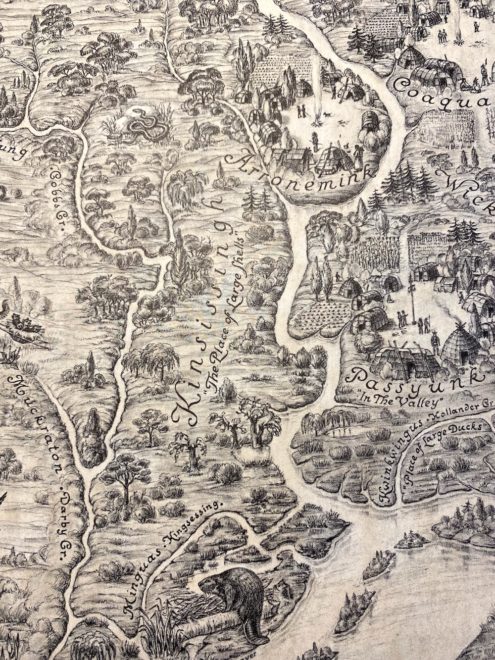 Map detail showing what would become South and Southwest Philadelphia. | Image courtesy of the Historical Society of Pennsylvania

A plethora of familiar place names dot the map. Passyunk (In the Valley) and Shakamaxon (The Place of Eels) are villages. Bodies of water include Wisahickin (Cat-Fish Stream) and Pemickpacka (Slow Flowing Bear-Fat Creek). Kinsissingh (Place of Large Shells) and Wingehacking (A Favorite Spot for Planting) are other areas. Also labeled, fittingly, is Manayunk (The Place We Go to Drink).

I was struck by the historical precision and the reverence conveyed by the map. When the team at History Making Productions created “A Lost World 1600-1680” as part of the Philadelphia: The Great Experiment series, numerous Lenape experts were consulted about the lives of their ancestors in order to create realistic reenactments and accurate graphics. The Coaquannock map mirrors the world that is brought to life in the film. 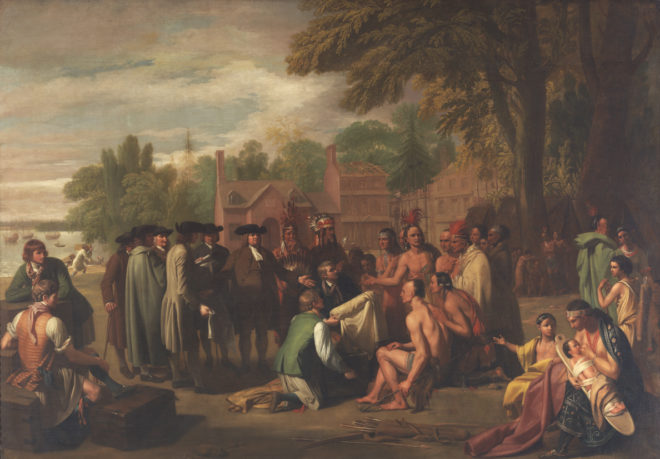 Benjamin West’s classically inspired Penn’s Treaty with the Indians mythologized the 1682 treaty at Shackamaxon (present site of Penn Treaty Park). Working in England, West didn’t have access to Lenape models, so he modeled them after sculptures he studied in Italy. The painting was commissioned by none other than Thomas Penn. | Image courtesy of the Pennsylvania Academy of Fine Arts

While researching the origins of the Coaquannock map, I came across two early 1930s sources that share this accurate, reverential views of our region’s former inhabitants. In 1931, the University of Pennsylvania hosted a conference for leaders of public, private, and parochial schools and representatives of civic and scientific organizations such as the Franklin Institute and the Academy of Natural Sciences to prepare educators for the 250th anniversary of William Penn’s first trip to Philadelphia.

William Penn and the Delaware Indians, the 1932 publication that was the product of this conference, exalts William Penn, but also puts the Native Americans he encounters in a positive light. They are described as physically impressive. “All whites who met the Indians early describe them as tall, of large frame, lithe, and vigorous. They were usually healthy. Deformities, such as bow-legs, hump-backs, cross-eyes, were not known among them… They sometimes fell ill with colds or fevers, but, until the whites came, they did not suffer from contagious diseases.” Their moral character is also highlighted. “All white explorers who came early and intimately among the Indians describe them as honest, courteous, dignified, hospitable, and generous.”

The Coaquannock map, however, captures a moment in time. William Penn and the Delaware Indians continues the narrative beyond the first contact between Europeans and Native Americans. The book relays the familiar tales of William Penn’s fair and munificent treatment of the Indians and also describes how Penn’s sons and others betrayed the Indians’ trust. This much less noble phase of history, however, is given short shrift. “To the Indian, guns, powder and shot, metal knives, beads and ornaments were great prizes and land was abundant, so purchases were made at what seems to us ridiculously small cost. Gradually the Indians removed westward and finally became wards of our government on lands reserved for their use.” 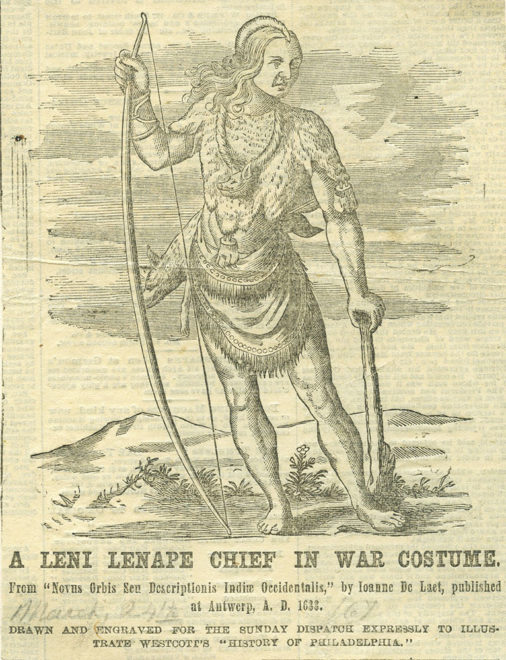 An illustration depicting a Lenape chief dressed for war. | Image courtesy of Print and Picture Collection, Free Library of Philadelphia

A later chapter in William Penn and the Delaware Indians delves a bit more deeply into the decades of forced migration experienced by the usurped residents of this land. But the paternalistic, pro-government tone continues. “In general, the laws of the United States and the Indian treaties with a few exceptions have been made to conserve the rights of the Indians,” the book claims. There is virtually no mention of the suffering, violence, and cultural suppression experienced by the Delaware as they were pushed from Pennsylvania to Ohio, to Indiana, to Kansas, and eventually to their current home in Oklahoma. The chapter concludes, “Thus our government is today virtually restating William Penn’s pledge of trust and good faith with the Indians who are still with us. This indeed is a worthy memorial to Penn.”

The WPA Guide to Philadelphia, published in 1937 as part of the Federal Writers’ Project, takes the same approach of glorifying the Delaware Indians of yore, but ignoring the plight of their descendants. These three products of the 1930s, the Coaquannock Map, William Penn and the Delaware Indians, and The WPA Guide to Philadelphia, reflect a consensus American view that simultaneously elevated Native Americans as noble people, while also relegating them to figures of a long ago past.

The Lenape population was decimated by disease following European settlement, but they have never disappeared. There were approximately 20,000 Lenape in 1600. By 1700, the tribe was reduced to 4,000. After more than three centuries of land swindles and forced relocation, descendants of the Lenape gained federal recognition as two tribes: The Delaware Tribe of Indians and the Delaware Nation, both based in Oklahoma. Other recognized Lenape-affiliated tribes reside in Wisconsin and Canada. 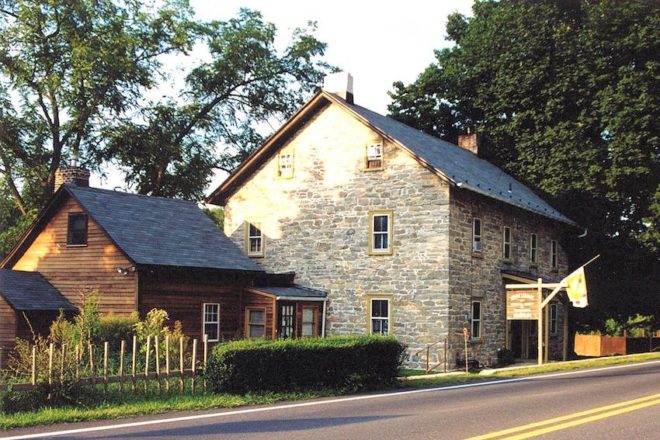 Curtis Zunhiga, a member of the Delaware Tribe of Indians and consultant to the University of Pennsylvania Museum of Archaeology and Anthropology, is seeking ways to bring the Lenape back to their native land through arts, culture, and an increased political presence. As co-director of The Lenape Center in New York City, Zunhiga asserts that Delaware Indians deserve a “place at the table of power” in their homeland. The Delaware Tribe of Indians established a formal partnership with East Stroudsburg University to promote collaboration between the Pennsylvania school and the Oklahoma-based tribe.

Although small in number, there have always been some Lenape who never left the Delaware Valley. Many practiced their traditions and rituals in secret, but their stories are now being told. Adam Waterbear DePaul, a tribal council member of the Lenape Nation of Pennsylvania is pushing for state level recognition. Pennsylvania is the only state in the former Lenape region that does not officially acknowledge descendants of its indigenous inhabitants. In 2002, the Lenape Nation of Pennsylvania signed a treaty with a variety of local organizations to promote Lenape culture and preserve the land. Every four years, they organize a Rising Nation River Journey, a multi-week canoe trip to cement ties between the Lenape and their community partners. 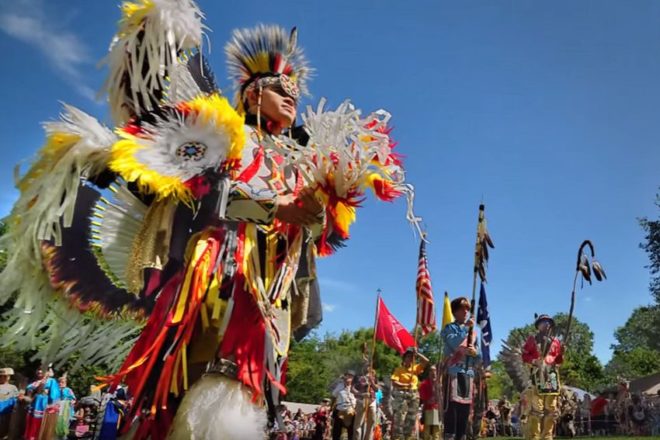 In 2017, a collective of area activists, artists, and educators of indigenous origins banded together to form Indigenous215. According to their website, “Our passion is to foster community, promote awareness and education of Indigenous history and contemporary communities, and support the urgent struggles for Indigenous rights, sovereignty, and self-determination in Philadelphia.” Fulfilling a Prophecy The Past and Present of the Lenape in Pennsylvania, an exhibit that was developed by the University of Pennsylvania Museum of Archaeology and Anthropology, is now housed at the Lenape of Pennsylvania Cultural Center and Trading Post in Easton.

As Indigenous Peoples’ Day shows signs of eclipsing Columbus Day, and Indian sports mascots have become less acceptable, perhaps these small steps toward renewing the Delaware Indian connection to the Delaware Valley will bear fruit. In the meantime, as your path takes you to places such as Aramingo Avenue in the Northeast, Tulpehocken Street in Germantown, Moyamensing Avenue in South Philadelphia, and Tioga Street in North Philadelphia, keep in mind that this land was known as Lenapehocking (Home of the Lenape) long before it was called Philadelphia.