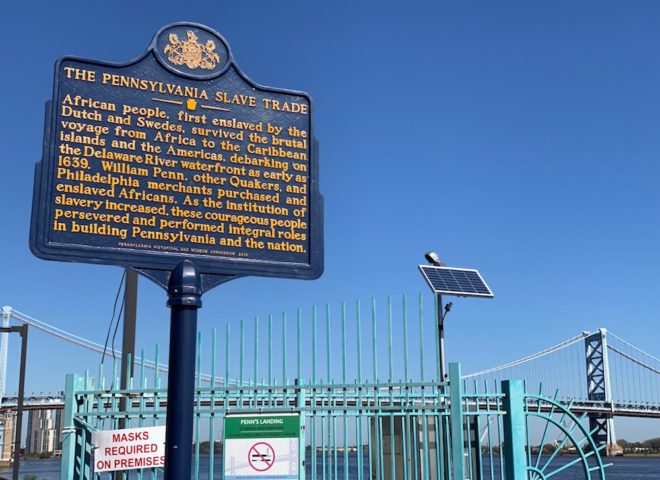 A state historic marker recognizing Pennsylvania’s role in the slave trade was dedicated at Penn’s Landing next to Independence Seaport Museum in 2016. | Photo: Michael Bixler

The final days of September and first weeks of October were quite eventful. At least they were in my world. I am an unabashed history nerd. Much to my daughters’ chagrin, I used to have a bumper sticker that read “I Brake for Historical Markers.” Thus, early autumn this year has been exciting for me. Monument Lab released its National Monument Audit, and five new historical markers were unveiled in Philadelphia.

Monument Lab is a Philly-based organization dedicated to encouraging critical, inclusive conversations about the way history and community are represented in the landscape. In 2017, the public art studio placed provocative interactive installations throughout the city, all designed to get residents to think deeply about the question “What’s an appropriate monument for Philadelphia today?”

During the past year, Monument Lab staff conducted an audit of nearly half a million historical monuments across the United States. Given that there are no official records tracking monuments at either the state or national level, this was a daunting task of data collection and analysis. On September 29, I, along with hundreds of historians, museum directors, and others, attended a Zoom presentation by Monument Lab co-founder, Paul Farber. The four key findings from this $25 million project, done in partnership with the Andrew W. Mellon Foundation, are: Monuments have always changed. The monument landscape is overwhelmingly white and male. The most common features of American monuments reflect war and conquest. The story of the United States as told by our current monuments misrepresents our history. Or, as The New York Times put it in their headline about the audit, “They’re White, Male and on Their Pedestals, for the Time Being.” The urban real estate website, Curbed, now part of New York Magazine, summed it up more succinctly: “The Nation’s Monuments are Male, Pale and Stale.”

Given our country’s history of patriarchy and white supremacy, the results of the audit are not surprising. Some of the particulars, however, are remarkable. Of the 50 people most often represented in historic monuments, 25 were enslavers. 44 were white males. Abraham Lincoln, George Washington, and Christopher Columbus are ranked numbers one, two, and three. Monuments celebrating non-white men and females included in the top 50 are Martin Luther King, Jr. (4), Joan of Arc (18), Harriet Tubman (24), Tecumseh (25), Sacagawea (28), and Frederick Douglass (29). There are more than ten times as many statues of mermaids than there are of congresswomen.

The National Monument Audit focused on traditional monuments, but Monument Lab defines a monument as “a statement of power and presence in public.” Using this definition, the blue and gold historical markers that dot the Philadelphia landscape are indeed monuments. Pennsylvania’s historical marker program was launched in 1913. The earliest state markers were bronze plaques mounted on boulders. Philadelphia architect Paul Phillipe Cret designed some of the plaques for this type of Pennsylvania historical marker. In the post-World War II era, the state began to use the “history on a stick” style of marker which is still used today. 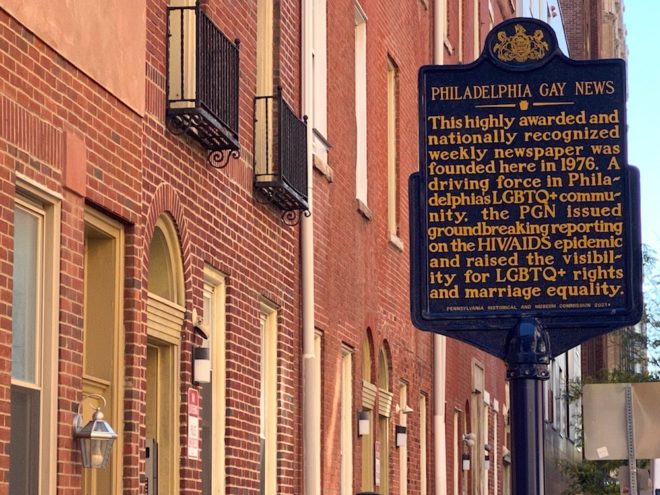 On October 13, 2021 a Pennsylvania historic marker was unveiled on 13th Street outside of the first office of the Philadelphia Gay News. The publication was founded in 1976. | Photo: Michael Bixler

Until the 1980s, staff members of the Pennsylvania Historical and Museum Commission (PHMC) decided where markers should be erected and worked with local historical societies and community organizations to raise funds and plan the dedication ceremonies. That changed when budget cuts decimated the PHMC, and only one professional historian remained on staff. Making a virtue of necessity, the PHMC began accepting nominations from members of the public. The criteria for historical markers are strict, and the application process is straightforward, but rigorous. A panel of historians and other history professionals reviews the applications and makes recommendations to the PHMC.

Three recent markers in Philadelphia honor Black men. On September 29, a marker for broadcaster Ed Bradley was unveiled in Fairmount Park. Caterer, businessman, and philanthropist John Trower was recognized with a marker in front of his former place of business in Germantown on October 3. That same day, a marker for scholar and writer Alain Locke was rededicated in front of the African American Museum of Philadelphia after the previous marker had been repeatedly hit by vehicles on the narrow South Philadelphia Street that was once his home.

The marker for Alain Locke, a gay man, is a bridge to the other recent markers, both of which also honor the LGBTQ experience. On October 8, a marker honoring the city’s first director of LGBTQ Affairs, Gloria Casarez, was unveiled at City Hall. This marker, nominated by the William Way Center, is also the first in the state to honor a person of Latinx descent. The original 13th Street location of the Philadelphia Gay News was the site of yet another marker dedication ceremony on October 13.

Inspired by these new markers and by the Monument Lab audit, I decided to do a similar assessment of Philadelphia historical markers. Conducting this audit was not complicated, and no grant money from Mellon was needed. The PMHC maintains a searchable database on their website for markers erected through 2019. A PHMC staffer sent me the list of markers approved in 2020 and 2021. Although not all of the approved markers have been installed, generally, once a marker is approved, it is eventually erected.

With the disclaimer that my data set may be slightly inexact, the Philadelphia marker audit was quite a contrast to the national picture. Of the 332 state authorized markers in Philadelphia, 107 are on African American topics. In other words, nearly one third of Philadelphia’s historical markers are about Black history. 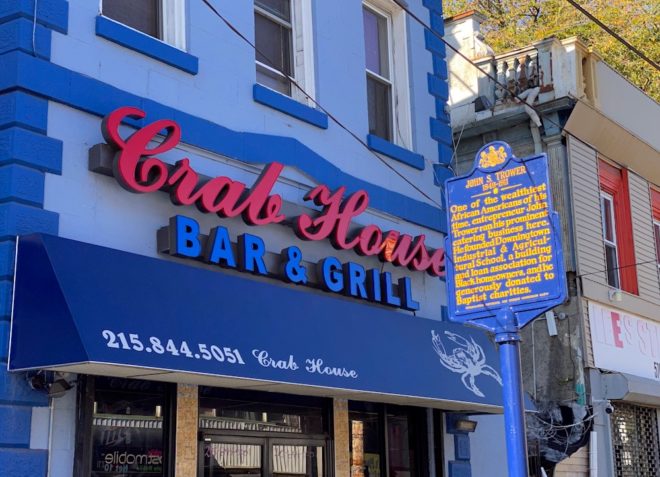 The impressive percentage of Black history markers in Philadelphia is attributable in large part to Dr. Charles Blockson, the dean of Philadelphia African American history and curator emeritus of the Charles L. Blockson Afro-American Collection at Temple University. In 1991, he received a grant from the William Penn Foundation to increase recognition of the Black experience in the Philadelphia landscape. Blockson and his team successfully applied for dozens of markers.

Given that African Americans have lived here since before the arrival of William Penn, it makes sense that our city’s historical markers represent those deep roots. Furthermore, most Philadelphia markers have been erected in the past 40 years, a time when more attention has been paid to African American history in academia, in education, and in public discourse.

Blockson’s most recent historical marker is the one that delves furthest back into local Black history. In 2016, a marker was dedicated at the Independence Seaport Museum recognizing Pennsylvania’s role in the slave trade. When Blockson won the prestigious Philadelphia Award in 2017, he called this marker one of his proudest accomplishments.

Malcolm Lazin, founder and executive director of the Equality Forum, has played the Charles Blockson role for the LGBTQ community. His first successful application was for a marker unveiled in 2005 commemorating demonstrations for gay rights that took place at Independence Hall on July 4 from 1965 to 1969. There are currently a total of 12 markers recognizing the LGBTQ experience in Philadelphia. Although this is only 3.6 percent of the city’s total, Philadelphia has more government-approved LGBTQ historical markers than any other city in the world. Quite a feather in the cap of the City of Brotherly Love and Sisterly Affection.

In March 2022, there may well be an addition to the Equality Forum’s LGBTQ marker list when Anna Elizabeth Dickinson’s marker is unveiled on the 1300 block of Arch Street. At this point, only 46 of Philadelphia markers (14 percent) honor women, so on that front we have a long way to go. Fortunately, the PHMC is prioritizing applications for underrepresented groups, so female representation may well increase in the coming years.

It is hard to imagine that our national landscape will ever fully reflect the complexity and diversity of the past. Even the idea of congresswomen overtaking mermaids seems far-fetched. In Philadelphia, however, we can learn so much about our rich and challenging past if we simply pay attention to historical markers. I think I may need to reorder that bumper sticker.