Living Large on the Delaware River

Imagine an exclusive enclave of opulent estates, designed by leading architects, with stunning riverfront views. In the mid-19th century, that did not mean the Amalfi Coast, Palm Beach, or the Hamptons. It meant Northeast Philadelphia.

In 1850, Philadelphia financier Charles Macalester, Jr., allegedly the richest man in the world at the time, snapped up 1,000 acres of farmland along the Delaware River in what is now known as the Far Northeast. Why there? Let’s just say he wanted to keep up with the Biddles.

Macalester sold off much of the land, but retained a prime slice of riverfront for an estate he named Glengarry after his ancestral home in Scotland. The Italianate mansion sat on the small bluff where the Poquessing Creek enters the Delaware River. Macalaster named the town Torresdale after his hunting lodge. At the time, Torresdale consisted of only two streets. 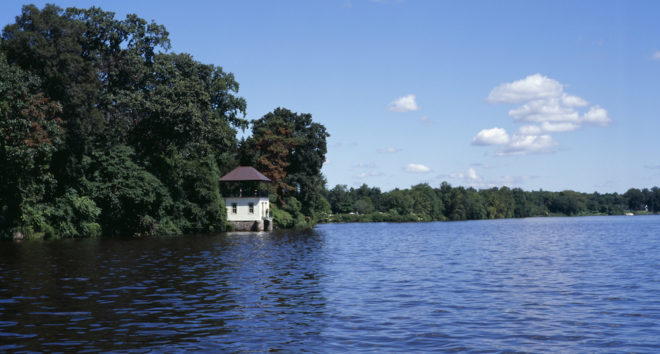 The Glen Foerd boathouse on the Delaware River. | Image courtesy of AK Architecture

The original estate included a three-story mansion, a Gothic-style gatehouse, five greenhouses, and a riverfront cupola. Naturally, Macalester had a yacht. Why else live on a river?

During the summer, heads of state from Washington, DC flocked to Glengarry, but they didn’t come for the view. They came because Macalester was a major player in U.S. politics and finance. He was president of the Second National Bank and served as adviser to several presidents. He went on to found Presbyterian Hospital (now Penn Presbyterian Medical Center).

Many wealthy Philadelphians came by steamboat to the Torresdale area to escape the summer heat and the intolerable fumes of the city. It became a resort filled with casinos and fancy boarding houses. Of those, only the Morelton Inn remains. 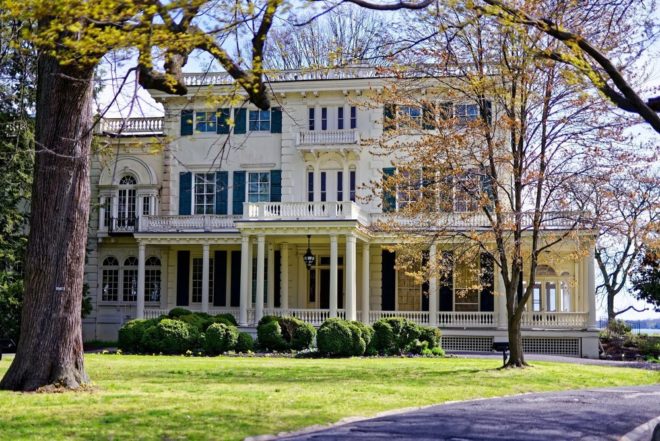 Glen Foerd on the Delaware River was renovated and expanded in the early 1900s. The historic mansion and estate is now a museum, wedding venue, public park, and host to special events. | Image courtesy of Glen Foerd

Nothing truly glamorous happened at Glengarry until 1895 when the property was sold to leather goods manufacturer Robert H. Foerderer and his wife Caroline. The Foerderers hired architect William McAuley to renovate the mansion and renamed it Glen Foerd, a combination of Glengarry and the new owner’s name. The result was a 25-room mansion with Classical Revival additions, including a formal dining room, rathskeller, parquet floors, and a grand staircase featuring a 15-foot Tiffany glass skylight.

Foerderer died in 1903 before the renovations were completed, but his wife Caroline and daughter Florence embarked upon an ambitious art collection from the Renaissance into the 20th century. They began with a large purchase of works by masters of religious art, landscape painting, and portraiture, including paintings by Thomas Sully, Hobson Pittman, and John Constable. 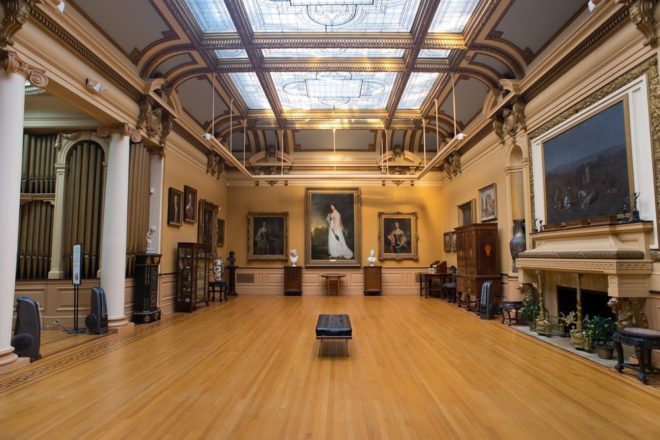 The art gallery at Glen Foerd was built in 1903. | Image courtesy of Glen Foerd

After her mother’s death, Florence Foerderer Tonner assembled one of the most extensive private collections of prints in the country. It was her patronage of Philadelphia women artists, such as Violet Oakley, that makes the collection significant today.

In spite of it their investment in the arts and architecture, the Foerderer’s ornate décor and social circles were considered “new” money, as perhaps some Palm Beach residents feel now about Mar-a-Lago. 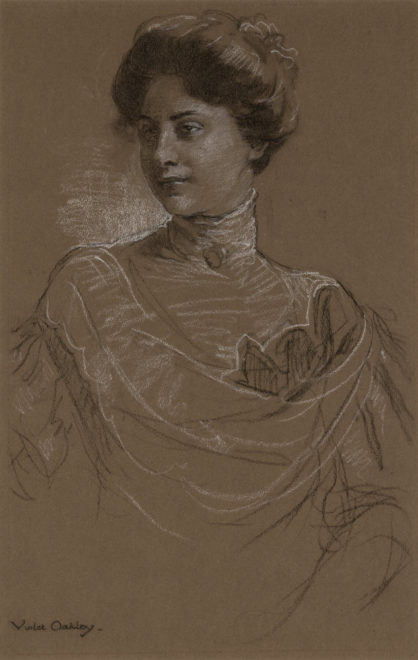 Florence left the estate to the Lutheran Church, which resulted in extensive deterioration. A court fight ensued over the will, and, in the end, the estate was awarded in trust to the Fairmount Park Commission. Somewhere along the way, the Union League of Philadelphia became involved. If nothing else, the League now owns the adjacent golf course.

Today, Glen Foered is a popular wedding venue, and its 18 acres of rare trees, flowering shrubs, vineyard, formal rose garden, vineyard, and riverfront comprise a public park, open daily from dawn to dusk and free to visit. Kayak excursions, led by professional guides, are available on Saturdays. Other events at the estate include Forest Walks with a Horticulturalist, Jazz Age on the Delaware, a 1920s-themed lawn party and the Philly Honey Fest. 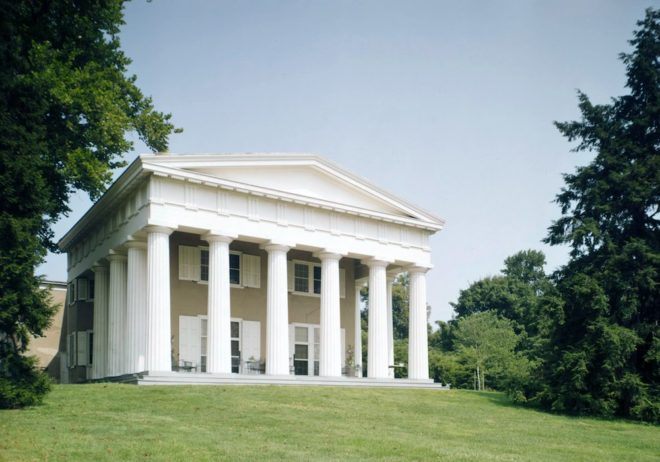 Andalusia in Bucks County was built for Nicholas Biddle and designed by architects Benjamin Latrobe and Thomas Ustick Walter. Pictured is the “Big House,” the architectural centerpiece of the estate. | Image courtesy of Prints and Photographs Division, Library of Congress

The historic 221-year-old Biddle Estate known as Andalusia, is located north of Glen Foerd, just across the Bucks County line. Back in 1795, John Craig, a wealthy importer, purchased 100 acres to escape the Yellow Fever epidemic raging in Philadelphia.

Craig hired architects Benjamin Latrobe and Thomas Ustick Walter to design a stately mansion. No surprise then that the result resembles the U.S. Capitol on which both architects worked. The “Big House” as it is called, is considered to be one of the finest examples of Greek Revival architecture in the United States. The estate included 30 gardens and an arboretum.

So how did Craig’s estate become synonymous with the Biddles? His daughter married one. The property has remained in the Biddle family for generations and is now operated as a museum. 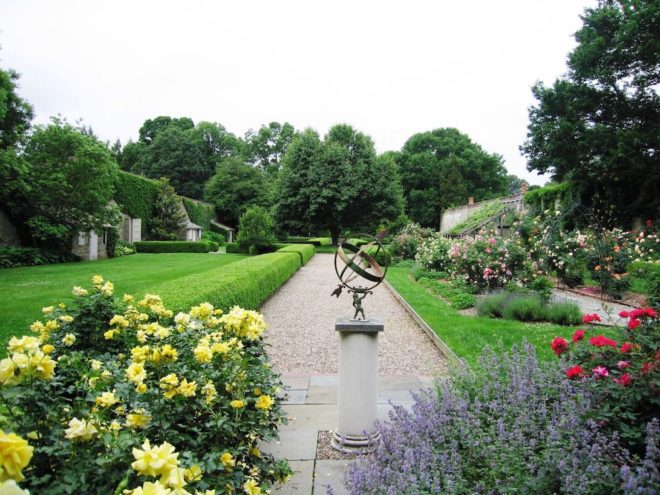 Andalusia’s historic house, gardens, and arboretum are open to the public for tours. | Image courtesy of The Andalusia Foundation

In 1980, James Biddle, then president of the National Trust for Historic Preservation and a leader of the historic preservation movement in the United States, divided  Andalusia, giving the Big House and 15 of the 225 acres to the Andalusia Foundation. Tours of this National Historic Landmark are available by appointment.