History for Sale: Piers 38 and 40 Hit the Market 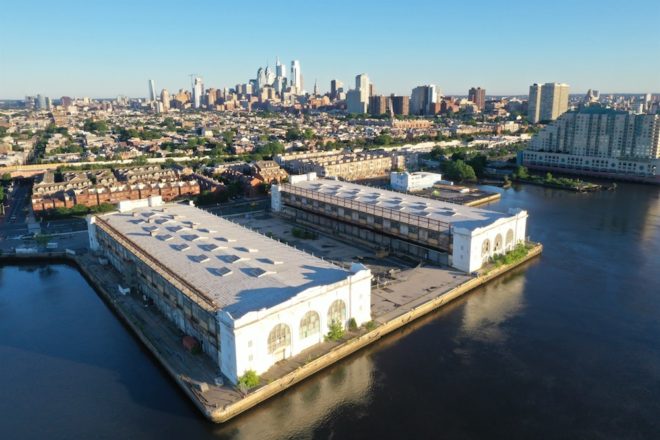 On October 18 Binswanger Commercial Real Estate Services was named the exclusive agent of Piers 38 and 40 at 775 S. Christopher Columbus Boulevard . The two piers, approximately 180,200 square feet each, will be sold as one property and is zoned CMX-3, which allows large-scale commercial and retail uses and multifamily residential use.| Image courtesy of Binswanger Management Corporation

PhilaPort’s October 2021 decision to sell Piers 38 and 40 in Southwark turns a significant page in the evolving history of the city’s maritime activity. These piers, constructed between 1914 and 1915, are the most recent industrial facilities to be built at this location along the Delaware River between Queen and Christian Streets near Old Swedes Church.

When William Penn, and before him the Dutch and Swedes, sailed up the river to anchor their vessels in the mouth of Dock Creek, they found this spot to be an ideal harbor of refuge as it provided them with fresh, clean water and shelter from both east and west. On the west was a ridge line later to become Society Hill. On the east there was an island that was later divided into two smaller ones named Smith’s and Windmill, which reduced the impacts of easterly storms on their anchorage. Ships approaching Dock Creek from the south sailed in the channel between the Delaware River’s western shore and the southern tip of Windmill Island. The colonists, wary of potential attack, chose to build a fort on a small island south of Windmill Island near the river shoreline to protect this passage. 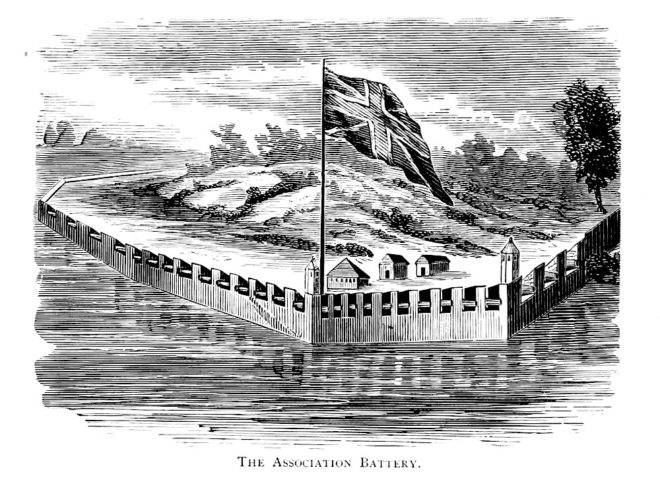 This woodcut depicts The Association Battery of 27 which was built in 1748 near what is now Pier 56 and Federal Street. | From The Historic Mansions and Buildings of Philadelphia, with some notice of their owners and occupants [Illustrated.], Thompson Westcott, 1877

This fort was located just beyond the southern boundary of the city in the district of Southwark, named for a borough in the county of Surray, England that is adjacent to London. Philadelphia’s oldest district, Southwark was created by act of Assembly on May 14, 1762. Its settlement by the Swedes predated Penn’s arrival, their first church being built there in 1677 and replaced by the present one in 1700. Known as the Association Battery of 27, this colonial fort was located near the foot of Federal Street, about a quarter-mile below the church. Old river rats referred to the area in vicinity of Federal Street as “Battery Island” into the early years of the 20th century.

Records indicate that the early maintenance and repair of Philadelphia’s piers involved public investment, but the City preferred to leave the port in private hands, turning over responsibility to its owners and operators, who formed the Board of Port Wardens (BPW) in 1766 and lasting until 1907. The board had no legal powers and, until 1870, was supported entirely with funds collected from wharf owners and vessels arriving and departing,. In 1870 it became a publicly-funded City department. Among the early piers was one built by Edward Pew for the BPW on Battery Island in 1773, a structure 35 feet wide and 60 feet long, calculated to be of sufficient size to serve any vessel calling the port at that time. The BPW paid Pew 300 pounds and 60 gallons of rum for his work. Another early pier was the Queen Street Wharf, the terminus of the Southern Mail Company, set aside by a special act of the Assembly for the exclusive use of a steamship line. This wharf was on the site of the Piers 38-40. 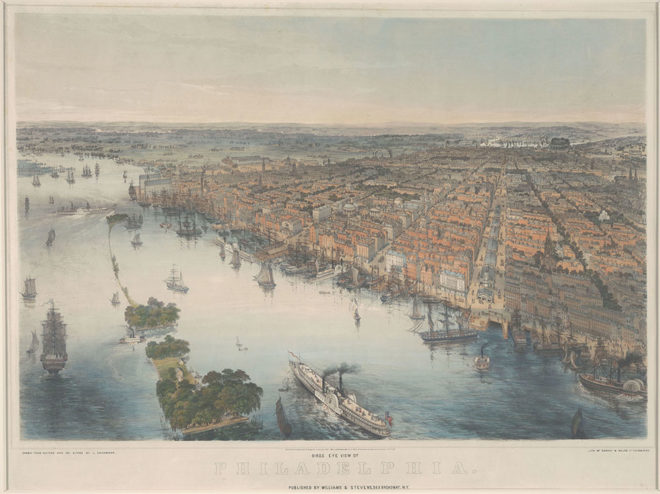 The arrival of railroads had an immediate impact on the port. The Philadelphia and Reading Railroad was the first to reach the waterfront from its Broad and Vine Streets terminus via its acquisition of the Northern Liberties and Penn Township Railroads along Willow and Noble Streets. It developed an extensive waterfront complex in vicinity of Vine Street, of which Piers 24, 25, and 27 still exist as parking decks. The Pennsylvania Railroad (PRR), chartered in 1846, arrived later. Essentially an east-west railroad connecting Philadelphia and Pittsburgh with its Philadelphia terminal at 30th and Market Streets, PRR quickly moved to gain access to Philadelphia’s tidewater. It first encouraged the City to extend its municipal horse-drawn railroad down Market Street from 30th Street to 3rd and Dock Streets. When Market Street proved too congested, PRR acquired the Southwark Railroad in the bed of Prime Street (now Washington Avenue) east from a junction with the municipal railroad in the bed of Broad Street. The PRR developed its own marine terminal facilities on what is now the location of Piers 38-40, including a large grain elevator in 1859. A few years later it acquired the adjacent Philadelphia Naval Shipyard after the Navy Yard relocated to League Island.

By the time of the Civil War it was becoming clear that the city’s old waterfront extending from Vine to Cedar (now South) Streets was too congested and that the shipping channel between the two islands and the old waterfront was too narrow for the larger ships now calling the port. The PRR responded, extending its trackage east on a bridge across the Schuylkill River from Woodlands Cemetery to the Schuylkill Arsenal and southward to Girard Point, where it developed a modern terminal. Arsenal Bridge was completed in January 1862, and the PRR’s track extended south to Philadelphia Gas Works in 1863. The handwriting on the wall for Smith and Windmill Islands was becoming apparent. 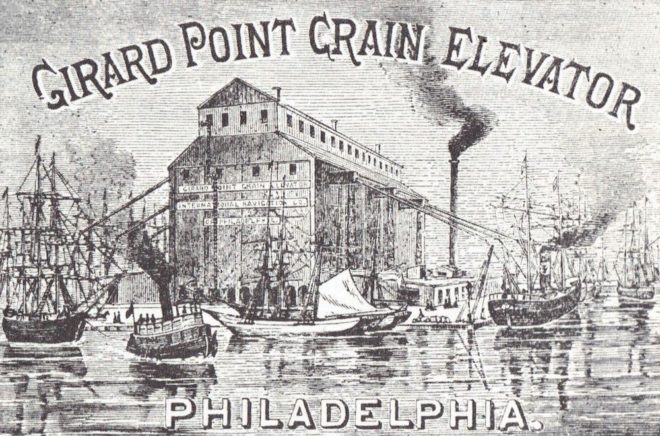 It fell to port warden and PRR president George B. Roberts to make this scheme happen. In 1870, the PRR had organized the American Steamship Company to operate its Red Star Line between Philadelphia and Liverpool and commissioned Philadelphia’s Cramp Shipyard to produce four iron steamships, the Pennsylvania, Indiana, Illinois, and Ohio, completed in June 1873, for this service. Each vessel was 355 feet long with a beam of 43 feet. The ships were too large to maneuver in the narrow Windmill Island channel, as the port’s finger piers were too short to accommodate them without blocking the channel. The PRR created a new terminal for them at Girard Point.

Acknowledging the inevitable, City Council authorized a committee to devise and present a plan to increase and accommodate the commerce of the Port of Philadelphia. After a nine year effort, the committee recommended the removal of Smith’s and Windmill Islands, the extension of wharves and the modification of pierhead and bulkhead lines, and put Roberts in charge of the project. The removal began in 1891 and was completed by January 1894 with the dredged material deposited in the back channel separating the Navy Yard from South Philadelphia. Today that area is occupied by the CSX intermodal rail yard and PhilaPort’s auto import-export terminal. 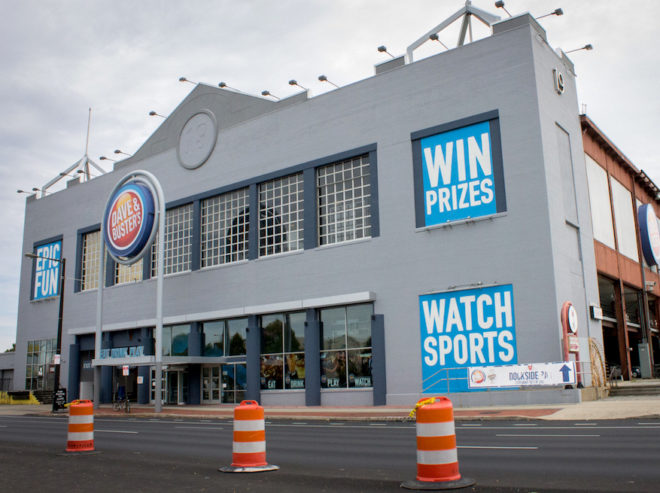 Pier 19 was completed in 1911 and was first used as an immigration station that welcomed scores of passengers from Southern Italy throughout the early 20th century. In 1994 Dave and Buster’s opened one of the first successful attempts in reactivating the Delaware River waterfront for leisure and entertainment. | Photo: Michael Bixler

The second phase of the port improvements project was construction of modern pier facilities, a scope of activity outside of the wheelhouse of the BPW. Thus, a new organization, the Department of Wharves, Docks and Ferries, was formed in 1907. Their piers would be exponentially larger than the decrepit ones that they were to replace,. For example, John Ridgway’s pier near the foot of Vine Street, which was 118 feet long and 33 feet wide, gave way to the department’s first creation, Pier 19, a double decker structure that is 566 feet long and 166 feet wide, in 1911. This pier survives today as restaurants, parking, and a marina.

Pier 38 and Pier 40 were constructed between 1914 and 1915 of fireproof steel, concrete, and brick as double deckers. The top deck was used for cargo unloaded from a ship berthed alongside. The lower deck was used for for cargo to be loaded aboard the ship after it discharged its Philadelphia-bound cargo. Draft of the 200 foot wide berths alongside them was 30 feet at mean low water, suitable for ocean vessels of that era. Their cargo transit sheds are 526 feet long and 170 feet wide, with five-feet-wide aprons along their berths and a 20-foot-wide apron at the pierhead. The January 10, 1917 edition of the Evening Public Ledger described the piers by saying that, “The effect of the architectural design is decidedly massive and substantial as well as highly artistic.” 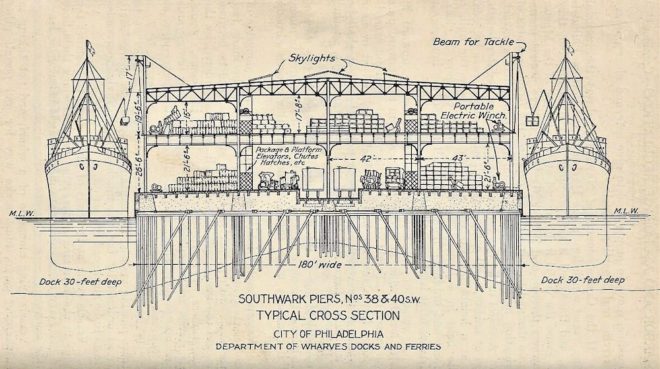 A cross section of Piers 38 and 40. | From Port of Philadelphia: Its History, Facilities & Advantages, 1926

In the 1950s the berths between these two piers were decked over, creating a useful laydown area for their tenant at that time, the Atlantic and Gulf Stevedores. This was the port’s initial foray into providing container handling, using a rubber-tired crane known affectionately as the Yellow Bird.

The Port of Philadelphia enjoyed an advantage over its rivals in having a common railroad line serving all of the piers in the shipping district other than those that were owned by and proprietary to the railroads themselves. This “belt line” railroad allowed seamless transfer of freight carloads between the piers and the railroads’ own yards, a feature not found in most other ports. The Philadelphia Belt Line Railroad Company, chartered in 1889, was originally proposed to run entirely around the city. While such an undertaking might not have been economically feasible, the threat that it presented was enough to compel the other railroads to participate in its belt system. 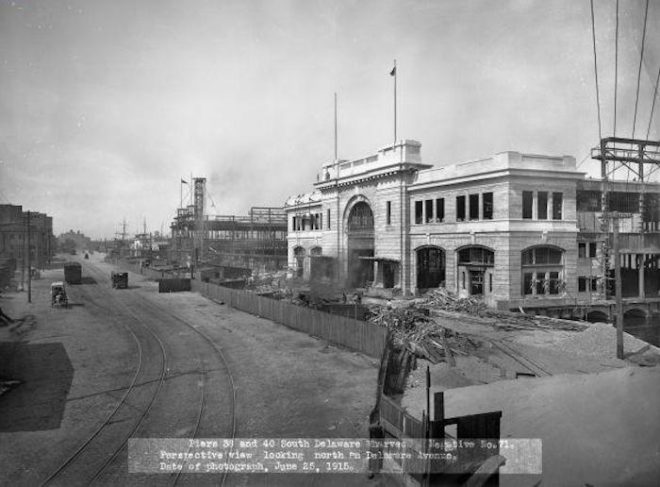 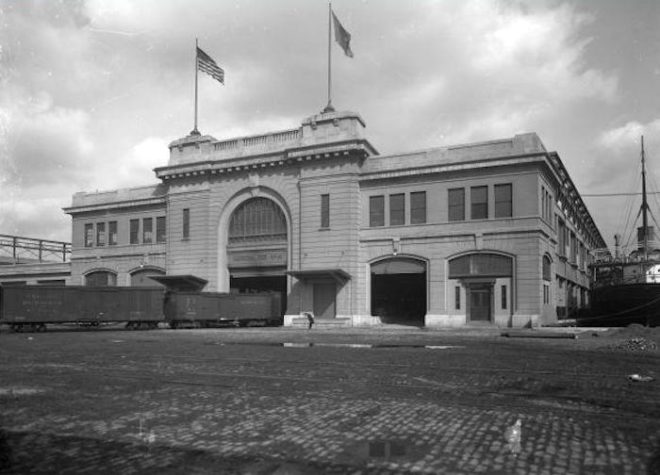 The arrival of containerization in ocean shipping that was spearheaded by Malcom McLean in the 1950s made finger piers like 38-40 obsolescent, but the port managed to find niche cargo such as paper, cocoa beans, and steel that has kept them in use. The Philadelphia Port Corporation, successor to the Department of Wharves, Docks and Ferries, found a non-port use for two similar piers, 3 and 5, known as the Girard Group, for conversion to residential reuse in their transit sheds and retail in their head house facing westward along Delaware Avenue.

Perhaps a similar reuse will be forthcoming for Piers 38 and 40. The Philadelphia Regional Port Authority’s Board of Directors will ultimately make that decision. The Port Authority, an independent agency of the Commonwealth of Pennsylvania, is governed by directors appointed by the governor. The board is also advised by a governor-appointed advisory committee and its agenda items include, among other things, port real estate planning. One can only hope that they will consider the historic nature of these beautiful piers and the adjacent neighborhood in their sales criteria.