Philly Beer History is on Tap at the Neon Museum 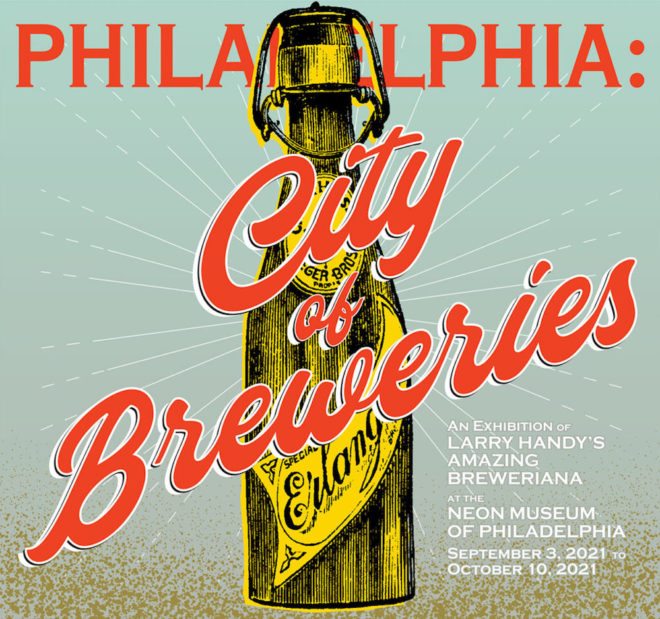 Philadelphia has long been infatuated with beer. The establishment of the earliest brewery coincides with the founding of the city itself in the 1680s.

“In the 17th and 18th centuries, breweries were located along Dock Street,” said Lawrence Handy, beer historian and executive director of the Philadelphia Brew-seum. “At that time, the beers were more often British ales.”

The arrival of lager yeast in 1840, commemorated by a Pennsylvania Historical Commission plaque at North American and Poplar Streets, launched a change in beer styles and, as a result, breweries. “Lager beer uses a process of cool fermentation, followed by maturation in cold storage,” explained Handy. “Ales are produced quickly, while lagers are space intensive, owing to both the longer conditioning time and cooler temperatures.”

This prompted a move away from Old City to the then-western reaches of the city where larger facilities could be built. “It was the advent of lager that created Brewerytown,” said Handy. 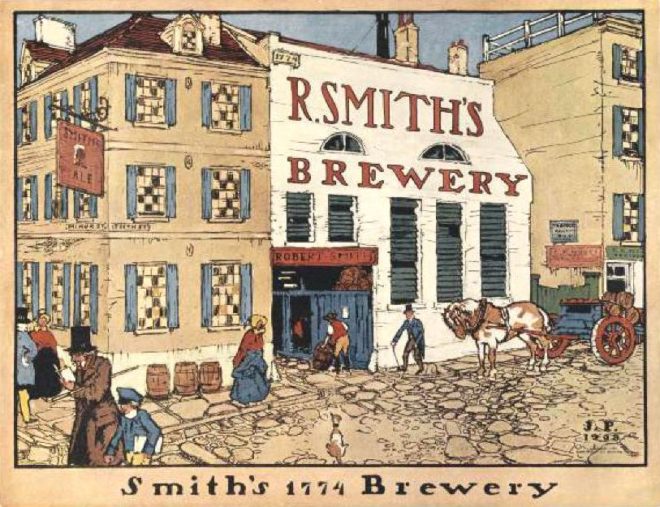 An illustration from 1909 by PAFA-trained painter James Moore Preston showing Robert Smith’s brewery and ale house in Northern Liberties. Part of a series of 12 illustrations of taverns and inns operating before the American Revolution. | Image courtesy of Brookston Beer Bulletin

The construction of lager breweries included digging underground to create conditioning caves. That has left a problematic legacy in some cases. In Northern Liberties, the property of the Henry F. Ortlieb brewery stretched from the east side of the 800 block of North 3rd Street through to North American Street. “After the brewery closed, there was a parking lot on American Street that had to close because it was sinking from the cellars that were underneath it,” recalled Handy.

A new exhibition at the Neon Museum of Philadelphia curated by Handy highlights Philadelphia’s brewing history from that 19th century heyday of lager breweries to the aftermath of Prohibition. 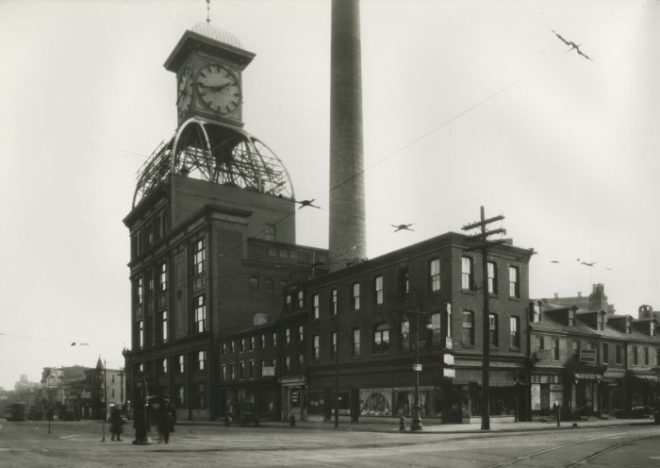 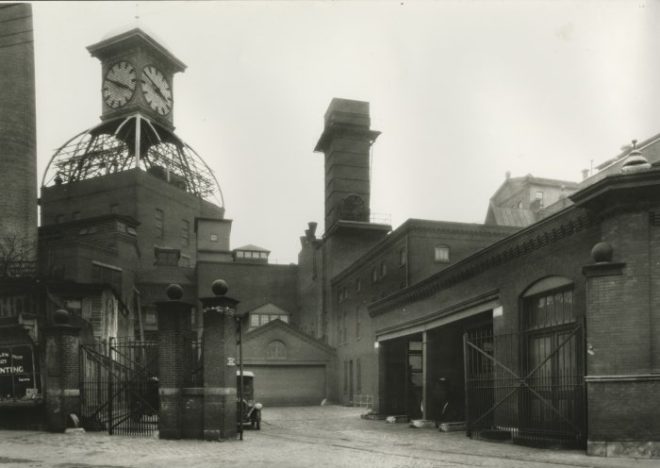 Schmidt’s Brewery at Girard Avenue and 2nd Street was established in 1860. The 16-acre facility closed in 1987 and all 26 buildings were demolished in 2000. It is now the site of the Piazza at Schmidt’s. Date of photographs unknown. | Images courtesy of PhilaPlace.org

It begins in 1896, when the United States Brewers’ Association, a trade organization that existed from 1862 to 1986, held it 1896 convention in Philadelphia. “They published a commemorative book that illustrated the 60 breweries that were operating in the city at the time,” said Handy. For the exhibit, he enlarged photographs of each brewery and detailed the fate of the business and its buildings.

The 13 years of Prohibition dealt a death blow to most of those 60 breweries. After the ratification of the 21st Amendment in 1933 which repealed Prohibition, 15 of them started up again, joined by one new brewery, but without a chunk of their previous business. “Prior to Prohibition, breweries often owned many saloons,” said Handy. “But that ended when the repeal of Prohibition mandated a three-tiered system of production, distribution, and retail, where a business was only allowed to engage in one of the three.”

Buildings from a few of the pre-Prohibition 60 still stand today in some form. Three that have fared better than most have been repurposed. Several of Otto C. Wolf’s buildings of the Louis Bergdoll City Park Brewery at 29th and Parrish Streets are now condominiums, including the main building at 825 North 29th Street and the brewery house on 28th Street between Parrish and Poplar Streets. The F.A. Poth Brewing Company at 3145 West Jefferson Street, another Otto C. Wolf design, is currently being converted into apartments by real estate firm MMPartners. The bottling house from the Henry F. Ortlieb brewery at 824-42 N. American Street is now the offices of the architecture firm Kieran Timberlake. 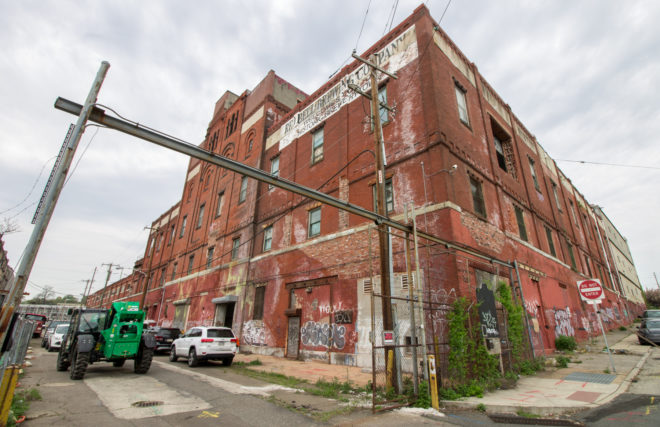 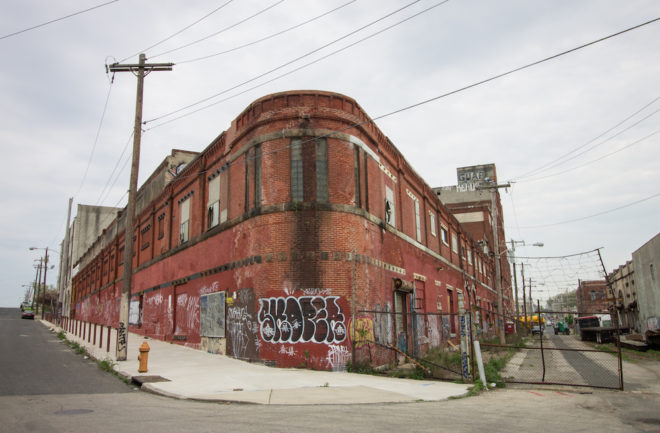 The cold storage facility, pictured here in 2018, is all that remains of the F. A. Poth Brewing Company’s brewery at 31st and Jefferson Streets. The sprawling beer-making campus opened in 1870 and was designed by architect Otto C. Wolf. This extant building is currently being renovated for residential use. | Photos: Michael Bixler

Two others still house breweries. The Weisbrod and Hess Oriental Lager Beer Brewery at 2439 Amber Street in Kensington was home to Yards from 2002 to 2007 and since then has been occupied by Philadelphia Brewing Company. At 1710 N. 5th Street, Human Robot Brewing is located in the former stable of the Theodore Finkenaur Brewery.

The collecting of beer paraphernalia, or breweriana, is a widespread hobby in the United States, with at least three national membership organizations with dozens of local chapters. Popular collectibles include beer cans, beer bottles, bottle openers, beer labels, tin signs, beer mats, beer trays, and beer taps. Some collectors, like Handy, go on to research the history of breweries. “I started in 1970 collecting beer cans,” he explained. “Then I branched out into other items and got interested in the history of Philadelphia breweries and the buildings.”

Handy’s collection numbers in the hundreds of the more common items and also includes many rare pieces. One of his favorites is a portrait of the John Betz Brewery at 415 Callowhill Street, printed on metal and framed. Dating from roughly the 1880s, he says it’s the only one of its kind that he has seen. “At that time Betz was the second largest brewery in the city. It probably hung in one of their saloons.” 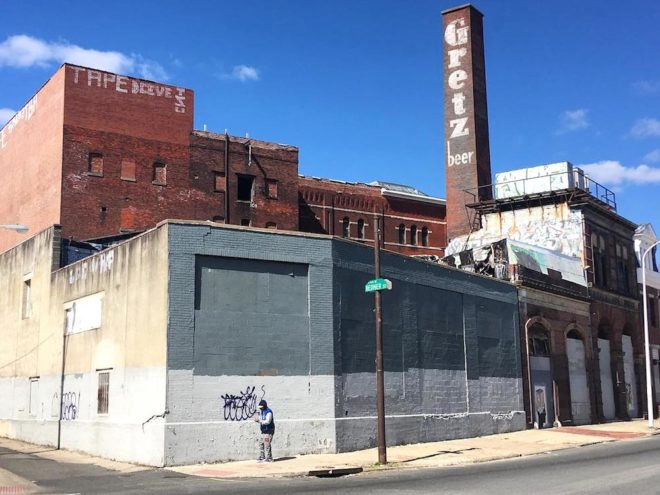 The Rieger & Gretz brewery at Germantown Avenue and Oxford Street was built over 130 years ago. The abandoned complex looks worse for wear today, but plans are in the works to convert it into a 200-unit apartment building. | Photo: Michael Bixler

As with many collecting hobbies, there are numerous sites where fans can bid on and buy items. But, occasionally, other opportunities arise to acquire items. Handy described one such time, while on a beer tour with fellow beer historian Rich Wagner in the early 1990s. “We stopped at the building that had been the Rieger and Gretz brewery at 1536-38 Germantown Avenue, which was up for sale,” he recalled. “Only part of it was occupied at the time and we believed there were files in vacant part of the building. We got permission to go through it. In one room we found the files from the post-Prohibition era, 1933 to 1955. Then, in the basement, we came across a safe with the pre-Prohibition files.” Handy said the discovery yielded a treasure trove of brewery letterhead, correspondence, and invoices from allied industries.

Although there are no neon signs in the exhibit, it fits in with museum founder Len Davidson’s vision. “It is our fourth special exhibit,” he noted. “They’ve all been about Philadelphia art or history.” A planned cycle of frequent, short-term special exhibits seems like a good strategy to keep visitors coming back, and it’s within the abilities of the nascent museum’s small staff. “Unlike the Philadelphia Museum of Art, we don’t have a year or more to plan an exhibit,” said Davidson. “With us, it’s generally three weeks between exhibits.”

Philadelphia: City of Breweries is on view at the Neon Museum of Philadelphia through October 10. The museum, located within the NextFab building at 1800 N. American Street, is open Friday through Sunday. For information see their website HERE.