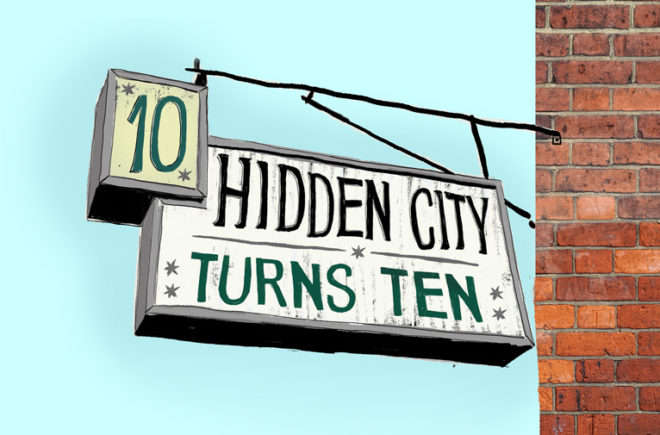 One day in 2010, Thaddeus Squire, the serial idea-spinner, called and asked if I’d be interested in editing a book based on the first Hidden City Festival which he had produced the year before. The festival had awakened Philadelphians to the mysteries of their city, and Thaddeus imagined that a book would extend the romance and engage in larger questions about the stewardship of an old city’s material culture. Some time later he called again and said he was considering acquiring the defunct Philadelphia arm of the popular Brooklyn real estate blog Brownstoner. This would be the platform to continue the conversation the festival had started.

At the time, Peter Woodall, a legendary Center City bartender, was finishing up a side gig as the Hidden City Festival’s site coordinator and historian. Pete was trained in journalism at UC Berkley and had worked as a newspaper reporter. Both of us were frequent contributors to the City Paper’s “Slant” guest editorial column—and we were friends.

Thaddeus, Pete, and I began meeting in Hidden City’s office in the basement of 2043 Locust Street, a skunk of a building on a block of purrty cats. Soon, Gabby Warshauer, the former editor of Brownstoner Philly, the now Philadelphia Inquirer reporter Samantha Melamed, the former City Paper editor Theresa Everline, publicist Cassandra Oryl, graphic designer Mark Gisi, and historian Ken Finkel joined us around the cozy conference table to try to imagine what a Hidden City adaptation of Brownstoner might look like (it wouldn’t exactly be about real estate, for one). In March 2011, Pete sent an email to the group, which also included Hidden City board member Christopher Plant, that read “We think a Hidden City blog/website looks promising, and will be in touch about next steps.”

It is instructive that Pete wrote “blog/website,” as we spent the next few months wrestling with the difference between the two concepts. Brownstoner was a “blog,” but we wanted to create something more substantial: a media outlet that could influence the way people thought about, commented on, and saw their city. The project would therefore have to be a “website.” We wanted it to be serious, but also irreverent. Inviting and also challenging. Tightly edited and beautifully photographed. And, boy, were we ambitious, imagining we would publish three or four—or even more—stories a day. As the concept developed into the Hidden City Daily, sometimes, a bit too rich on the Kool-Aid, we referred to it as our “web magazine.”

As co-editors, Pete and I canvassed the city to recruit potential writers and photographers for our many imagined departments. We wanted long stories and short ones, items and videos, photo essays and reported news. We knew we could draw on history. The exploration of contexts would differentiate our approach. Readers, we felt, would benefit from knowing why something was important.

Before we launched the Hidden City Daily, we loaded the site up with a few stories: Kim Miller’s homage to the cherub gargoyles at the 33rd and Dauphin transit terminal, a building that was threatened with demolition but has been since preserved. Harry Kyriakodis’ exegesis on the High Pressure Fire System building at Delaware and Race, soon to be adapted by the Fringe Festival. A strange item I produced on global warming, with a quote by the (spectacularly racist) physician Charles Caldwell, from 1801: “The summer climate of Philadelphia, and other large cities similarly situated, is an artificial torrid zone, in which the thermometer rises from four to six degrees higher as it does at a distance of a few miles in the country.”

Then, on September 7, 2011, ten years ago this week, we launched. The first story was, fittingly, by Hidden City legend Rachel Hildebrandt. She made note of the rather memorable ceiling in the salon of the former mansion of Alexander Van Rensselaer at 18th and Walnut. Entirely composed of portraits of Italian princes in gold frames, it is a study on weird Philadelphia.

Over the last decade we have lost a great number of co-conspiratorial media sites. To list them would be way too depressing. But we are still here and not because the original conceptual vision was perfectly honed despite the months of meetings. But rather because Hidden City has stayed nimble, adapting to changing media and cultural climates and always seeking out new voices. We have published 262 different bylines, a who’s-who of Philly standouts, and more than 2,200 stories. Pete produced a second Hidden City Festival in 2013 and started the tour program soon after. He then opened our online store Hidden City Mercantile. Bradley Maule shined his genius on the website starting in 2012.

For the last seven years—the longest tenure of any Hidden City editor—Michael Bixler has guided the website’s development and growth with a heavier emphasis on people-centered stories, a stronger focus on historic preservation and watchdog journalism, more engaging and inclusive history, and publishing more stories by female writers. Over 75 percent of our articles are currently written by women. Under Michael’s direction, Hidden City’s Instagram account has also grown into a powerhouse media project all its own.

In 2018, the book Thaddeus had long before imagined finally became reality. Temple University Press published Philadelphia: Finding the Hidden City, a collaboration between Pete and I and the photographer Joseph E.B. Elliott. In 2019, Danni Sinisi guided Hidden City through a process of rebranding and redesign.

In many ways the redesign in 2019 marked the beginning of a new era. But dates are dates, and so this week we celebrate the big number ten. From the start we asked ourselves if Philly really possessed infinite stories. If not, we might have had to slow down. Ten years in we are pretty sure the well goes down a ways yet. That is the thing about the “hidden city.” It holds a lot of secrets mighty close. Somebody’s got to go find them, and Hidden City is still here to do just that.