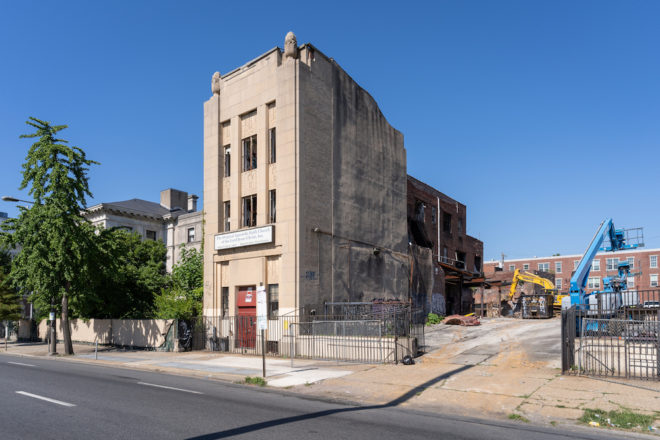 The former Levine Funeral Home at 1512-16 North Broad Street has sat vacant and open to the elements since a three-alarm fire broke out in 2018. Despite efforts to save the building, which is listed for legal protection on the Philadelphia Register of Historic Places, the Department of Licenses and Inspections is currently demolishing the 88-year-old building. | Photo: Michael Bixler

Another striking piece of Philadelphia history is meeting an untimely end, succumbing to fire, neglect, and tangled titles. On Monday a demolition company began preparations for tearing down the former Levine Funeral Home at 1512-16 North Broad Street under an order from the Philadelphia Department of Licenses and Inspections (L&I).

Built in 1933, the North Broad Street landmark was designed by architect Edwin Leo Rothschild who was known in the 1920s and 1930s for projects within Philadelphia’s Jewish community. Although many of his works are no longer with us, like the Jewish World Publishing building at 233-25 South 5th Street and the Adath Jeshurum Synagogue at North Broad and Diamond Streets. However, the Talmud Torah Association at 508 Moore Street and the Zeta Beta Tau fraternity house on the University of Pennsylvania’s campus are still standing.

The Levine Funeral Home is situated on the west side of the 1500 block of North Broad Street. It is adjacent to the Alfred Edward Burk Mansion at the corner of Jefferson Street, which has been owned by Temple University for 50 years and vacant for more than half that time. The block is anchored at the northern end by a Rite Aid drugstore with the parcels of vacant land in between owned by Temple.

The former funeral home remained with the Joseph Levine & Sons organization for over 40 years until it sold the building in 1980 to The Original Apostolic Faith Church of the Lord Jesus Christ, Inc. and its bishop, Ernest Tookes, the current owners of record. 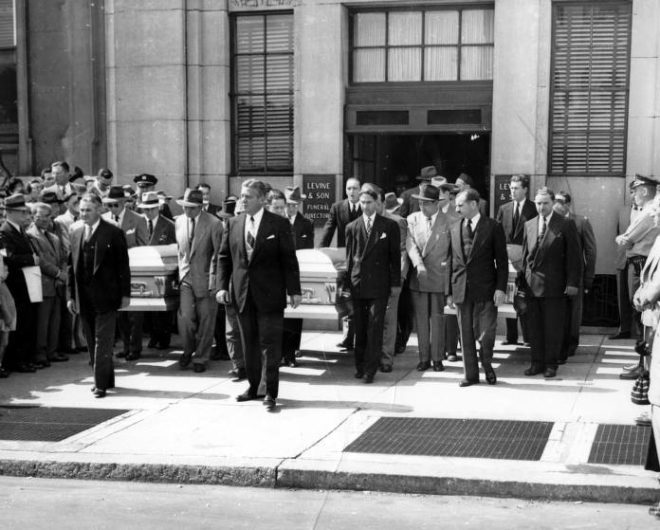 For over 30 years the congregation appears to have occupied the building without incident, although The Temple News noted in 2014 that the pastor was better known as a fruit vendor in the neighborhood than a religious leader. But around 2008 L&I began issuing violations that included unsafe deteriorating and bulging walls and citing the church for making alterations without permits. Most were eventually dealt with. “Having a property designated as historic doesn’t guarantee a good steward,” noted Patrick Grossi, advocacy director for the Preservation Alliance for Greater Philadelphia.

Things seemed to unravel after Pastor Tookes died in 2015. The following year L&I declared the building vacant and charged the church with not performing maintenance that the City requires on vacant properties. An attorney for the church appealed, claiming the building was not vacant and they were conducting services and other activities on the site.

In March 2018 a three-alarm fire heavily damaged the building’s rear extension. Fred Tookes, son of the late pastor, stated that the congregation intended to repair the building. However, when L&I issued violations deeming the building imminently dangerous, the church petitioned the Architectural Committee of the Philadelphia Historical Commission (PHC) in April 2019 for permission to demolish it.

An attorney appeared at that meeting representing a developer who was seeking a court-ordered Act 135 conservatorship of the building. The act allows the court to appoint a conservator to take control and repair a blighted, substandard, or abandoned property to return it to a safe and functional condition. The developer, Temple 1438 Greek Housing Alliance, had experience with other old properties in the area including the Peter A. Jordan House at 1438 North Broad Street. 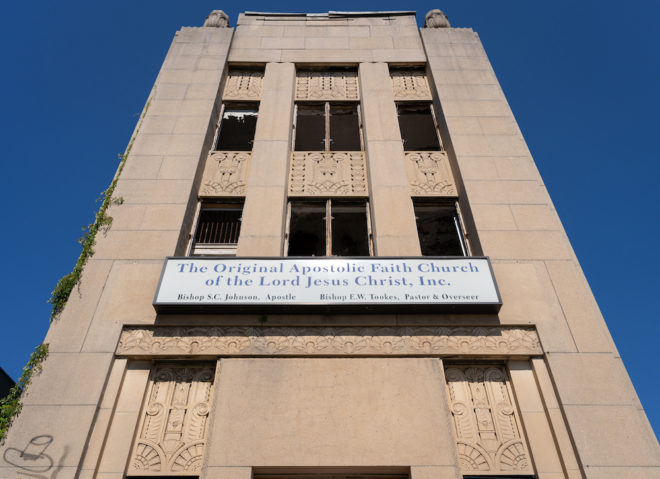 After the Levines sold the building, a procession of deed transfers followed, from the church, to Pastor Tookes and his wife, to other individuals, and back to the church.

And the congregation itself has become somewhat of a mystery in recent years. A search for any information—news accounts, websites, social media, etc.—turns up nothing beyond the immediate articles about the aftermath of the fire. The contact information continues to be the 1512-15 North Broad Street address, and the sign on the building still lists Ernest Tookes as the pastor and overseer. This led the attorney for Temple 1438 to question the validity of the church’s corporate structure and who has the authority to act on behalf of the church. The building still bears a “For Sale” sign, but a request for information sent to the contact email address was not answered.

No current record of tax-exempt status could be found for the church. Despite the owner being a church thereby tax exempt, the property was assessed real estate taxes both last and this year, although they appear to be unpaid. Philadelphia’s Office of Property Assessment and the Department of Revenue did not respond to requests for clarification.

Also adding to the mystery is the fact that the congregation is not affiliated with the Church of the Lord Jesus Christ of the Apostolic Faith that is located in Graduate Hospital, although both claim heritage from a 1930 offshoot of another Pentecostal church founded in 1919 in New York City. 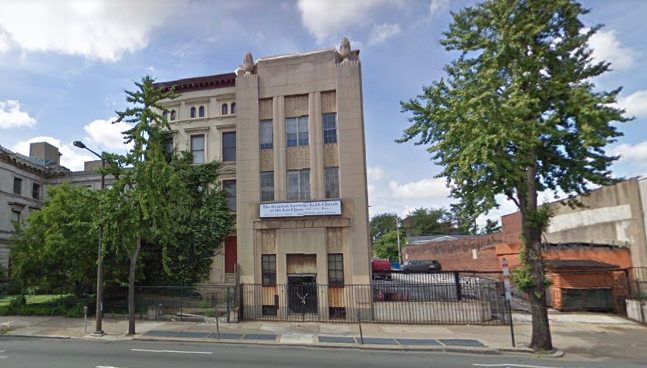 The Henry S. Hale House at 1510 North Broad Street, a four-story stone-clad mansion built in the late 1800s, was demolished by Temple University 2014 along with active commercial structures that stretched towards Oxford Street. School officials claimed at the time that the historic building adjacent to the former funeral home had “structural failures.” | Image: Google Street View

Two years after the PHC denied a petition for demolition L&I issued one on their own in May 2021. “You would hope L&I would defer to PHC guidance,” said Grossi, “but they don’t have to when they deem a structure imminently dangerous.” Officials at L&I did not respond to a request for comments about the PHC decision or the conservatorship claim.

“When a property is deemed ‘imminently dangerous,’ we’d like to see a couple of things done,” Grossi said. “First, providing more clarity on what needs to be done to the building, and then to prioritize stabilizing or partial demolition over total demolition.”

A second conservator claim was presented to the Court of Common Pleas by the Philadelphia Community Development Coalition (PCDC). Founded in 2015, it describes itself as a “homegrown 501(c)(3) non-profit organization dedicated to the improvement of Philadelphia’s neighborhoods.” According to president David Champagne, they have received conservatorships mostly for residences where neighbors are negatively impacted by abandoned or hazardous properties, but have been on the lookout for opportunities to save historic buildings. 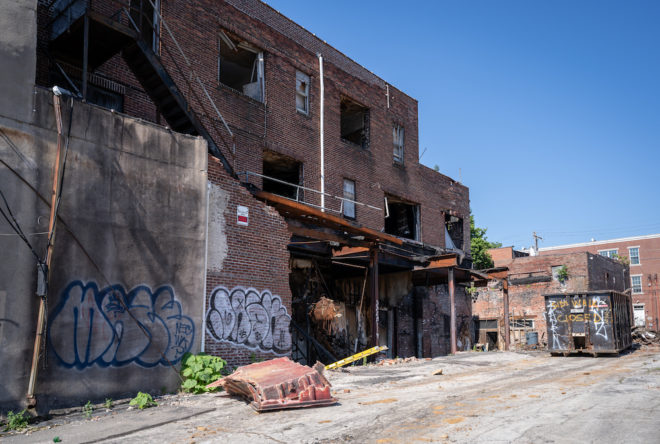 Damage from the 2018 fire is concentrated in the building’s rear extension which the church used for worship, event, and administrative space. | Photo: Michael Bixler

That case seemed to be the only thing coming between the Levine Funeral Home and demolition. On June 28 the Court of Common Pleas denied the conservatorship claim, paving the way for L&I to move forward with demolition. “It was disappointing,” said Champagne. “The city is going to spend around $250,000 of taxpayer money to demolish the building, while we were going to use our own resources.

Although without any legal standing, the Preservation Alliance has weighed in, requesting that “at minimum, a laser scan of the primary facade be performed, allowing opportunities for future reconstruction or partial material salvage.”

This stretch of North Broad Street is not the grand avenue of mansions it was a century ago, but it is a prominent thoroughfare within sight of City Hall, adjacent to Temple University, and an entry to the city used by hundreds of people a day.

So how did the circumstances surrounding the downfall of this grand building escape the notice of so many? No fewer than 17 inquiries were made to organizations, officials, departments, and individuals who seemed like they would have a stake is the situation or some knowledge about it. Only three, non-official, preservation-minded entities responded. The others either ignored the inquiry entirely or professed no knowledge. 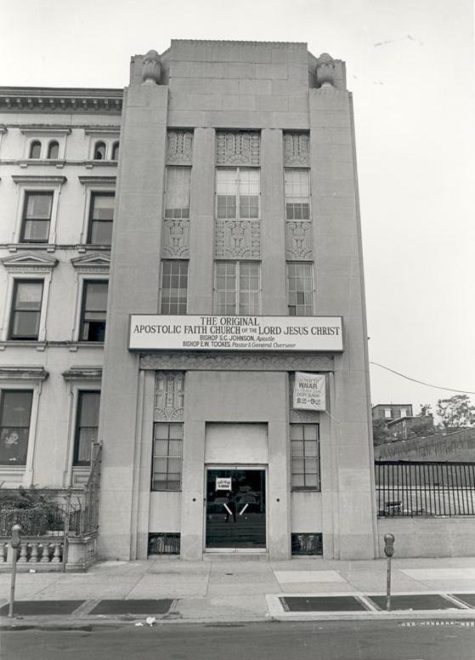 The facades of the Henry S. Hale House and Levine Funeral Home during better times. Date unknown. | Image courtesy of the Philadelphia Historical Commission via PhillyHistory.org

Perhaps it was the lingering history of the decline of this section of North Broad Street from its heyday that warranted the designation of a “Mansion District” that labeled it just another relic from that era. Or perhaps it was the imprimatur of the church’s sign at the front door suggesting the building was safe and cared for because it housed a congregation. Or perhaps the building is just another victim of the real estate development tide that is happening in so many Philly neighborhoods—economically advantageous for some, but a significant loss for others.

Whatever the reason, it is sad and disappointing to see a beautiful edifice like this become just another example of collateral damage.

The Preservation Alliance’s Patrick Grossi summed up the situation poignantly. “Demolition seems to be the preferred path in these cases, and we’d prefer to see a different path.”