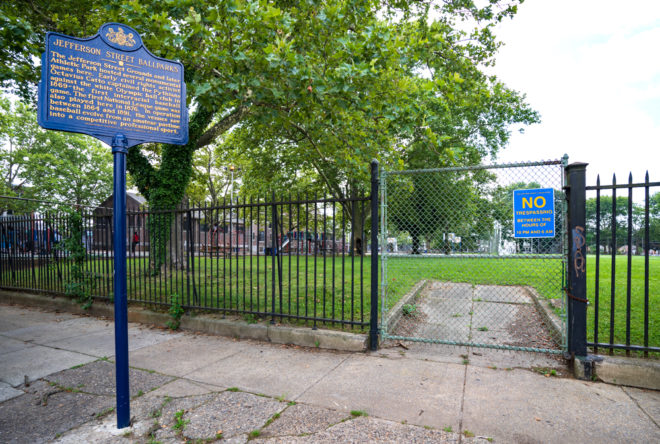 A Pennsylvania historical marker at 27th and Jefferson Streets was placed in 2017 to honor the location of the first baseball game played between a Black and a white team. | Photo: Michael Bixler

It is unlikely that the intersection of 27th and Jefferson Streets has ever been included in any tourist guide ever offered to a visitor to the city. That’s too bad. The nation’s first hospital was not located there. Nor was the first library, fire department, or anti-slavery society–all notable accomplishments of the city’s history. But as another baseball season comes to its midpoint, there is reason to pause and recall that more than 150 years ago, on the first Friday of September 1869, Philadelphians came in droves to a playing field on Jefferson Street for a ball game the likes of which no one in the nation had ever seen before.

Today, the day would have been the beginning of the Labor Day weekend, but back then it would be 13 more years before there was a Labor Day to celebrate. But the celebration of this sporting event, drawing fans on horseback, carriage, and foot, did not need a national holiday to bring more than 4,000 people to a field in the pastoral west end of the city.

The crowd was there to see a white baseball team play a Black one, a competition marked by great possibility, pre-game controversy and the national glare of the media, which was then, by and large, newspapers.

The New York Times reported on its front page that the spectators witnessed the “first game played between a white and colored club.” The Deseret News in Utah described the crowd as “immense.” The Philadelphia Inquirer, like most papers in the city, did not routinely write about African Americans playing baseball, but the Inquirer covered this game.

All were there to see two local nines, the all-Black Philadelphia Pythian base ball club–baseball was spelled with two words back then, and its participants played on clubs, not teams, and those clubs were most often written about in the singular–against the Olympic club, a white group that had begun as a town-ball club in 1838. It was the oldest organized sports organization in the nation.

Baseball is built upon a lattice of dates, numbers, and past games, yet this is a date and game little known to most who follow baseball: Sept. 3, 1869, the first Black versus white contest. 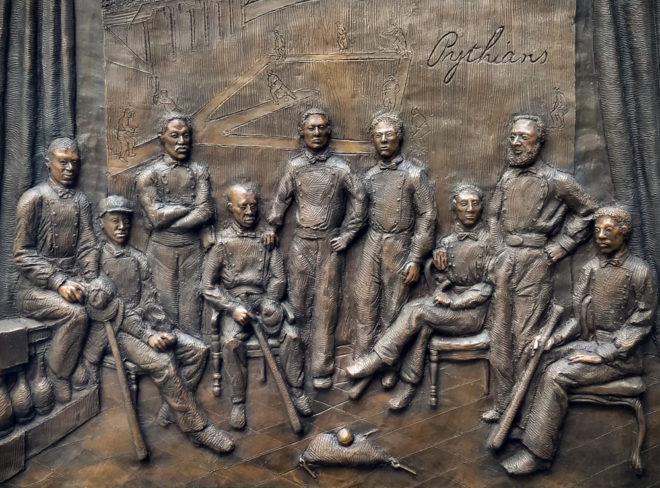 This relief at City Hall, part of “A Quest for Parity: The Octavius V. Catto Memorial” by sculptor Branly Cadet, celebrates the legacy of the Philadelphia Pythians, was one of the earliest Negro League baseball clubs. Octavius V. Catto and Jacob C. White Jr. and established the team in 1865. | Photo courtesy of Mark Jason Dominus

If anyone says they know when baseball began, your skepticism is suggested.

Ancient cultures played games with bats and balls in many places, including Mexico, Egypt, and Greece. An Egyptian tomb drawing from 2400 B.C. shows a pharaoh playing seker-hemat, or “batting the ball.” A game called “base ball” was played in the United States and England in the 1700s. A 1796 German book had seven pages on its rules, including a changing number of bases depending on the number of players.

Young white men were playing variations of baseball in New York and Philadelphia in the 1820s, the games more about recreation than competition. By the 1850s, Princeton, Harvard, and Williams had ball clubs. Pitchers threw overhand and fast in Boston town ball (which typically had 11 players and five bases), underhand and not so fast in New York base ball. Players in both games fielded bare-handed, hurting palms, and gnarling fingers. The two games fought for supremacy. New York won.

Foul lines were created bringing onlookers closer to the action. A governing body formed in 1857 to institute rules and oversee admission to the National Association of Base Ball Players. Town ball clubs were not permitted.

As white teams organized and grew in New York, Pennsylvania, New Jersey, and beyond to Detroit and Denver, Black clubs formed as well. The first were in Brooklyn in the late 1850s, but after the Civil War there were soon clubs in Chicago and points east. The Pythian club, formed in Philadelphia in 1866, played home and away games with clubs from Washington, D.C., Harrisburg, Albany, Brooklyn, and Chicago. In 1867, the club was 9-1, once beating the Washington Alert club with civil rights leader Frederick Douglass in the stands watching his son play the infield.

White and Black players were often familiar with one another–the Pythian nine sometimes played on the white Athletic club’s field–but the game was segregated. Captain and second-baseman Octavius Catto, a school teacher and civil rights activist, sought membership in the national association. Every white team applying–265 clubs–was admitted. The 266th entry, the Pythians, was not.

On the blackboard of American team sport a white chalk line had been drawn, not to be erased until well into the 1900s. To be sure, the line had long existed, but it had never been put to a test before. 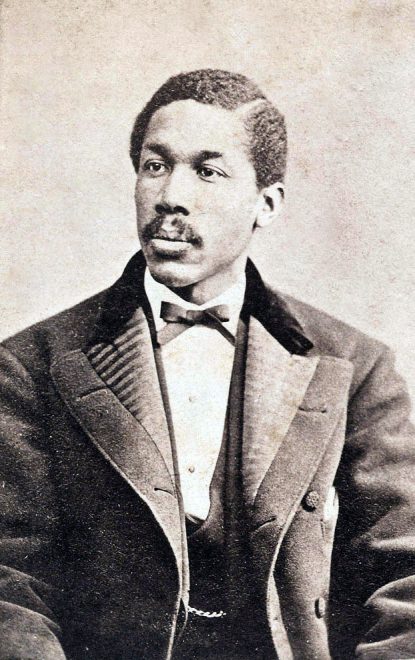 A photograph of Octavius V. Catto taken in 1871 at the portrait studio of Messes, Broadbent, & Phillips. | Image: Public Domain

In 1867, Catto helped lead a fight that desegregated Philadelphia’s horse-drawn streetcars, but the failure to test the Pythian’s mettle against whites remained nettlesome. Two years later, The City Item, owned by Thomas Fitzgerald, a former owner of the Athletic club, was the only local paper that covered baseball extensively. It published a letter calling for a local white club to play an exhibition against the Pythian club. Such a game was a good idea, the letter said, because of “the serviceable practice the Pythians may afford. … I learn that the Pythians are composed of the most worthy young men among our colored population. Who will put the ball in motion?” It was signed, “A Lover of the Game.”

Was Catto the letter writer? Perhaps, but a better guess was Fitzgerald himself, a publisher, playwright, and baseball umpire trying to advance the game as well as adding readers to his newspaper. After several months of more letters and of white teams saying they would play, but then backing out, the city’s first bat and ball team, the Olympics, agreed. The date would be September 3.

The game began at 2:45 p.m. The crowd was racially mixed and well-behaved before and during the contest, perhaps caught up in the knowledge that what they were seeing had once been unthinkable.

The Pythians were handsomely outfitted in dark blue pants, white shirts, and caps described as “neat.” As the game was played then, there was just one umpire, Fitzgerald, at home plate. He patrolled all the bases, but his task was not to make safe or out calls or determine if a ball was fair or foul. The two teams did that. It was his responsibility to make the determination if the teams could not agree. And his opinion mattered only if one team appealed to him to make the call.

It is not difficult to imagine questioning the integrity of an opponent in the heat of a game. But Catto, the Pythian captain, apparently told his club to appeal no calls at all, likely concerned what might happen if a Black man questioned the honesty of a white man on the field in front of thousands.

The flip of the coin landed the Pythian’s way, and they chose to be the home team. Catto caught two pop flies, but the Olympic club scored one run. The Pythian club scored three on three hits, one by Catto. The score at the end of one was 3-1.

In the second, the Olympic club scored eight runs. The Inquirer’s story referred to them as “the whites.” The home team scored two in a two-out rally, making the score 9-5.

In the fourth, it was a 29-5 “whitewash,” as one newspaper described, writing that the “colored players” kept battling. Three hours and ten minutes later, the final score was 44-23. In an unsigned column in his own newspaper, Fitzgerald wrote that Catto’s club had been too polite for their own good.

He wrote: “An umpire cannot voluntarily interfere between two clubs (and) … therefore the judgment must be demanded. However, the Pythians, we suppose, were not disposed to be critical or captious under the circumstances. … This will account for their failure to note important points in the game. For instance, they allowed two Olympics to score who neglected to touch home plate.”

He went to say that the Olympic pitcher threw “too swiftly,” and less underhanded and more sidearm than permitted. “If these points had been noticed …,” the score would have been “very close.” 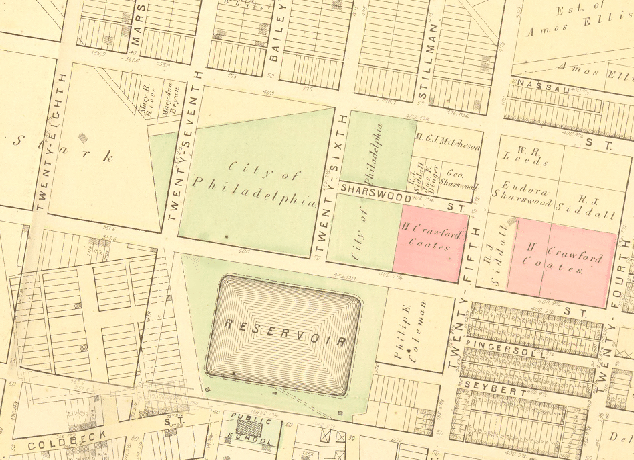 Two weeks later, the Pythians played another white club, winning 27-17. Other interracial exhibition games soon followed. The all-Black Resolute club of Boston defeated the white Resolute club of Boston 25-15, winning the right to retain their name. The all-Black Alerts of Washington D.C. lost to the white Olympics of Washington D.C. on a field across from the White House.

The good feelings were not shared by all. The white Maryland Base Ball Club refused to play the white Olympics in late September because they had played the Alerts, who were not a “conventional organization,” a 19th-century euphemism for a Black team.

Before too long, unofficial games between the races were common, but Black clubs remained banned from state and national baseball organizations for decades. The Pythian-Olympic contest was a missed opportunity for baseball and for the nation. Perhaps a durable change would have occurred if baseball had opened itself up after September 3.

The Pythian club persuaded and shamed white baseball into sharing a playing field with a Black team. They showed they were equal. As for the color line in baseball, it would remain until 1947 when another persistent Black second baseman crossed it.

Murray Dubin and Daniel R. Biddle are the authors of Tasting Freedom: Octavius Catto and the Battle for Equality in Civil War America, from which this story has been partially excerpted. 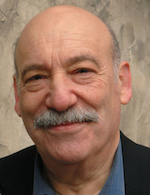