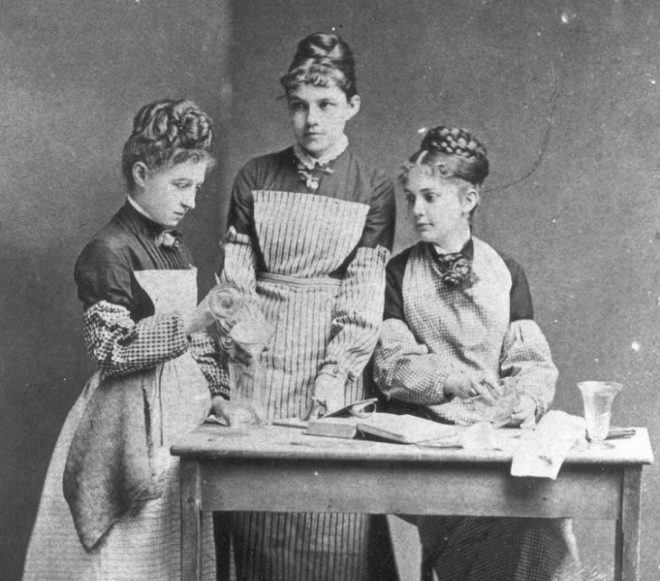 Women comprise 56 percent of college enrollment in the United States. It is surprising to realize how quickly higher education went from disenfranchisement through an uneven pattern of change to reach today’s numbers.

The 19th century witnessed a slow opening of opportunities. Oberlin College in Ohio was the first in the United States to admit women, in 1837, four years after its founding. In Philadelphia, the University of Pennsylvania (Penn) admitted its first female students in 1876, although not into degree-granting programs. Temple University was coeducational at its founding in 1884, as was Swarthmore College 20 years earlier. Other universities in the area, like Villanova, LaSalle, Saint Joseph’s, and Lincoln, held off until the mid-20th century.

Despite these limitations, there were significant numbers of women scientists in Philadelphia in the 18th and early 19th centuries. Many were drawn to the biological sciences, often led by a combination of intellectual curiosity and artistic talent. 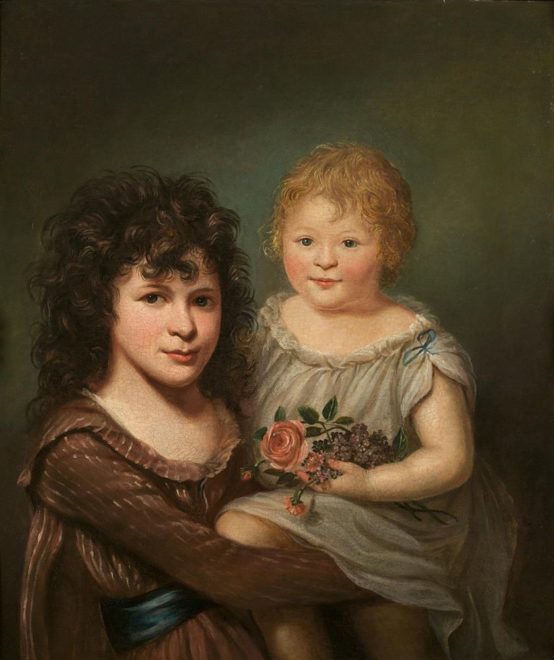 A portrait from 1796 of Sophonisba and Linnaeus Peale by Charles Willson Peale. | Image courtesy of the Philadelphia Museum of Art

An early example is Sophonisba Angusciola Peale Sellers (1786-1859), daughter of the painter and naturalist Charles Willson Peale. She grew up during the time her father was establishing a museum to display his collection of archaeological artifacts and biological specimens as well as his portraiture. She trained with him and, in particular, excelled at collecting and preparing bird specimens. 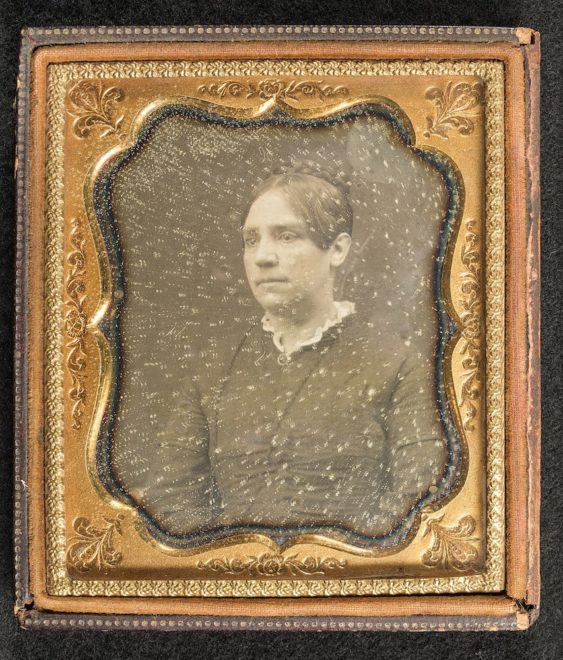 Margaretta Hare Morris (1797–1867) carried out entomological research whose findings aided agriculture and pomology. Although her research papers were accepted by scientific organizations, including the American Philosophical Society, they had to be read by others on her behalf, as only men could be members at the time. Later in her career she became the first woman, along with astronomer Maria Mitchell, to be elected to the American Association for the Advancement of Science in 1850. Nine years later she was the second woman to join the Academy of Natural Sciences of Philadelphia. 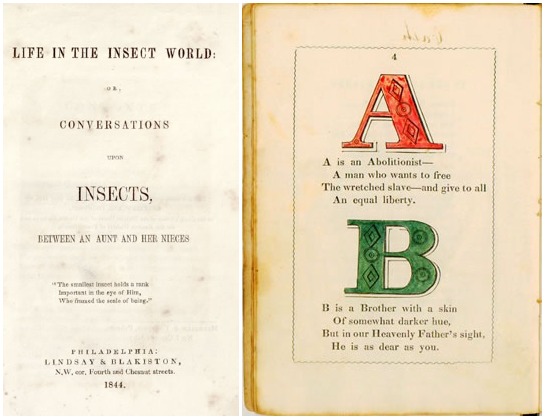 Pages from Mary Townsend’s books Life in the Insect World, or Conversations upon Insects, Between an Aunt and her Nieces and The Anti-Slavery Alphabet. | Images courtesy of the Sierra College Natural History Museum

Another entomologist, Mary Townsend (1814-51), found a different audience for her work. In 1844, she anonymously wrote and illustrated a book, Life in the Insect World, or Conversations upon Insects, Between an Aunt and her Nieces, based on her observations of and experiments on ants, butterflies, crickets, and many other insects. Townsend was also an ardent abolitionist, known for another book, The Anti-Slavery Alphabet, written for children.

Townsend was emulated by her friend, ornithologist Graceanna Lewis (1821-1912), who published her book The Natural History of Birds in 1868. Lewis had been educated at the French Creek Boarding School for Girls in Kimberton, Pennsylvania where she showed an aptitude for the sciences and was a skillful painter of birds and other natural subjects. She later studied with John Cassin, a well-known ornithologist at the Academy of Natural Sciences of Philadelphia, who gave the White-edged Oriole the name Icterus graceannae in her honor. Without formal higher education, Lewis was never able to obtain a college academic post. She spent most of her career teaching in preparatory schools, giving lectures on natural history to lay audiences, and working as a scientific illustrator. She was elected to the Academy of Natural Sciences in Philadelphia in 1870. The Lewis Papers in the Friends Historical Library at Swarthmore College contain many of her drawings of plants and birds. 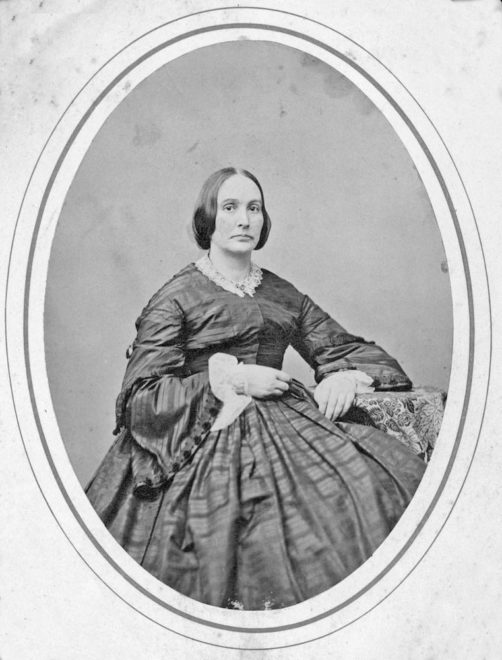 As area universities began to open up to women in the final decades of the 19th century female scientists sought that formal education. At Penn, some academic departments began admitting women, particularly those that were just being established, such as the biology department in 1884. Barriers remained for some time, however. Women were permitted to enroll in a two-year course of study that led to a “certificate of proficiency,” but were barred from earning a bachelor’s degree. They also faced a less-than-congenial learning environment. In 1889, the members of the senior class staged a protest and signed a petition to the Trustees against coeducation.

Botanist Ida Augusta Keller (1866 – 1932) was the first woman to complete a two-year course in biology at Penn and receive a Certificate of Proficiency in 1886. To continue her education she went abroad, first to the University of Leipzig and then completing her doctoral work at the University of Zurich in 1890. She enjoyed a long teaching career at Bryn Mawr College and later at the Philadelphia High School for Girls. Keller was the first woman elected to membership in the Philadelphia Botanical Club.

In 1894, Penn created a four-year course for a Bachelor of Science degree in biology that was open to men and women, the first at the university. The following year, Josephine Feger Ancona, who had received the certificate four years earlier, became the first woman to earn a bachelor’s degree at Penn.

The biology department at Penn gave the school another first for women. By appointing botanist Emily Lovira Gregory as a teaching fellow in 1888, she became the first female member of the university’s faculty, 12 years after admitting their first female students. Gregory had been educated at Cornell University and the University of Zurich and was the first woman elected to the American Society of Naturalists. At Penn, she developed the department’s botanical laboratory. 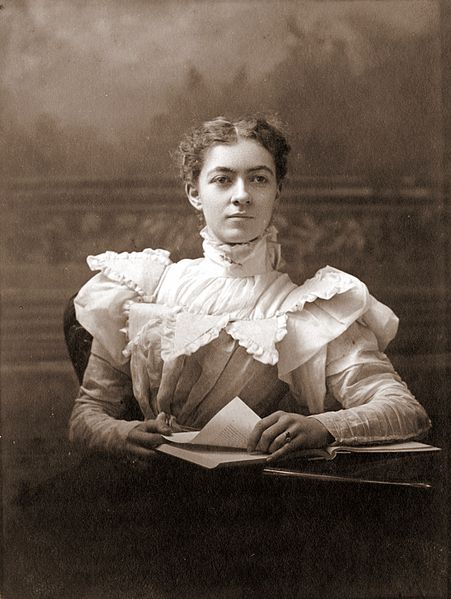 A few years later, Mary Engle Pennington (1872-1952) followed Gregory as another botany fellow in the department, but left in 1898 to become the director of the clinical laboratory at the Woman’s Medical College of Pennsylvania (WMCP). That school played an important role for women in the sciences in the 19th century. Founded in 1850 as the Female Medical College of Pennsylvania, it originated at the urging of doctor and abolitionist Bartholomew Fussell to a group of fellow physicians. Fussell saw a college to train female doctors as a tribute to his late sister, Esther Fussell Lewis—mother of ornithologist Graceanna Lewis—whom he thought could have been a doctor if given the opportunity.

Ann Preston (1813 – 1872) had been privately educated in medicine through an apprenticeship and enrolled in the college’s first class when she was 38 years old. After receiving a medical degree along with seven other women in 1851, she went on to become the college’s dean 15 years later, the first woman to lead a medical school. 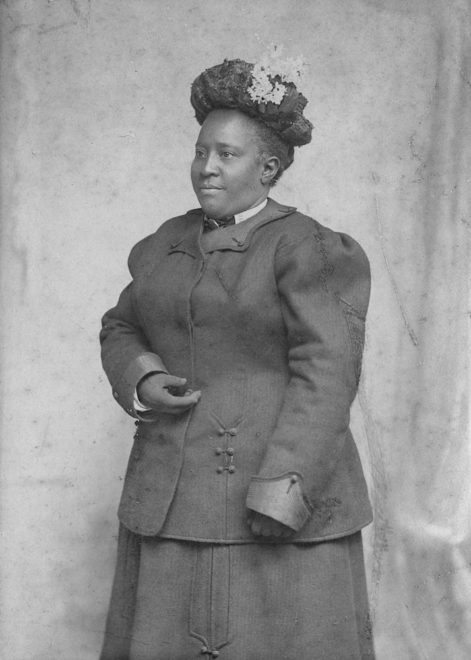 A portrait of Caroline Still Anderson circa 1890 by Frederick Gutekunst. | Image: Public Domain

Caroline Still Anderson (1848-1919) was another WMCP graduate and one of the first Black female doctors in the United States. The daughter of abolitionist leaders William and Letitia Still, she earned a bachelor’s degree from Oberlin College at the age of 19 and her medical degree in 1878, one of two Black students in her class of 17. In addition to maintaining a private practice, she opened a dispensary in the church where her husband Matthew Anderson served as pastor. The two of them were among the founders of the Berean Manual and Industrial School.

Like their undergraduate sisters, the number of women enrolled in medical school in the United States has recently grown to a slim majority. It seems that we as a society have discovered that science is women’s work after all thanks to these 19th century women and the myriad others who persevered like them to make it so.