Op-Ed: Philadelphia Gas Works Buildings Must Be Preserved for the Public Good

Editor’s Note: A version of this story was originally posted by Forum, an online publication of Design Advocacy Group. 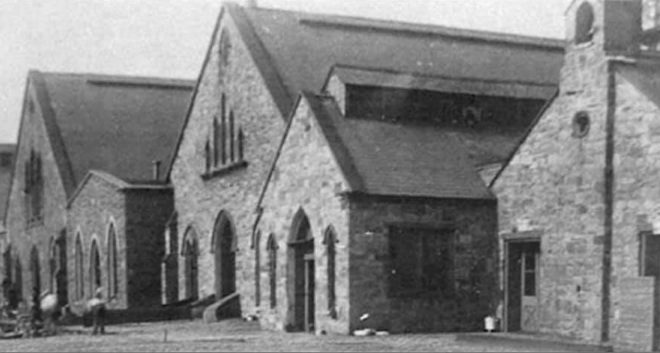 The Purifying Houses, aka “Church Row,” at Point Breeze Gas Works were built between 1853 and 1859. | Images: Philadelphia City Archives and Pictometry via Keeping Society of Philadelphia

A small group of distinctive, but long-forgotten 19th century Gothic Revival buildings at the Point Breeze Gas Works stand among the earliest monuments of the manufacturing of illuminating gas by a public utility in America, ranking among the most important industrial buildings to survive in Philadelphia. Commissioned approximately 15 years after the Philadelphia Gas Works (PGW) was founded, these handsome structures at 3101 West Passyunk Avenue have been nominated to the Philadelphia Register of Historic Places. They have an important role to play in our reimagining of the former industrial areas of South Philadelphia. Their preservation is imperative.

It is hard to imagine a time when candles and oil lamps were all that brightened dark streets and buildings, but this was how people lived until the advent of gaslight. The buildings of the Point Breeze Gas Works proposed for historic designation are from the era when Philadelphia was rapidly industrializing and this included the adoption of this new lighting technology. We were one of the most advanced American cities in providing citizens with manufactured gas for commercial, residential, and street lighting. This facility dates to that formative period when illuminating gas service radically changed the culture, economy, and society of our city, commonwealth, and nation. 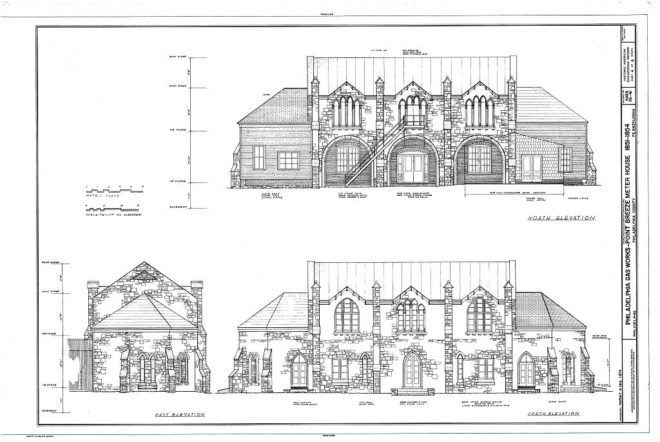 While the primary mission of PGW, a publicly-owned utility, is to provide safe, reliable gas service, it should, like all of our public institutions, be a responsible steward of our environmental and historic resources. This is one of the important egalitarian values that is foundational to a civic-minded society. If only institutions with “historic preservation” in their official mission statement protect our architectural patrimony, Philadelphia will lose much of what makes it one of the great historic cities of the United States. PGW, which opposes the historic designation, makes the following, rather poignant, acknowledgment of the value of civic heritage on its website: “We, like the great city we serve, have a rich, dynamic history that is leading us into a promising, productive future.” The buildings proposed for designation are a tangible representation of this legacy shared by Philadelphia and PGW.

Elsewhere, historic buildings and structures associated with the gas industry have been widely recognized, protected, and creatively reused. A quick search of Historic England reveals nearly 2,000 resources related to British gas heritage, many of which are protected. One only needs to look at the radical transformation that has recently occurred at King’s Cross in London to see the value of protecting such historic structures, even in what may be perceived as an industrial wasteland. At King’s Cross, the interlocking gas holders (called gasometers), which were built after the Point Breeze plant, have been adapted as modern apartment houses. While surviving landmarks of the early gas industry are relatively rare in this country, Baltimore, Maryland, Buffalo, New York, Charleston, South Carolina, Lowell, Massachusetts, Seattle, Washington, and Troy, New York, have all protected and preserved components of their 19th century gas works. 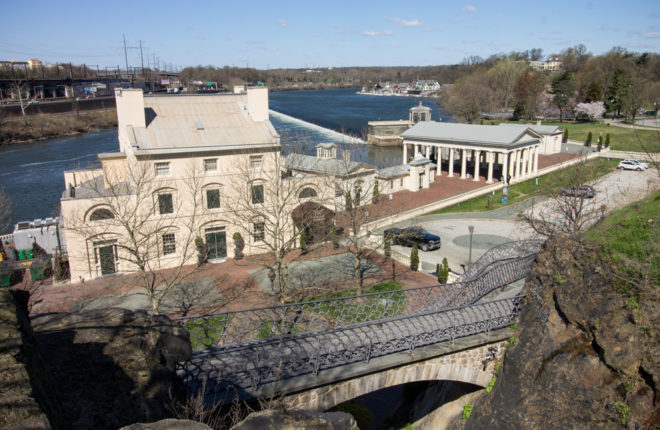 Fairmount Water Works was built between 1812 and 1872 and designed by Frederick Graff. It is now a museum, restaurant, and beloved, public amenity. | Photo: Michael Bixler

As many know, Philadelphia became the nation’s first World Heritage City in 2015, and its plethora of historic assets not only speak of the colonial and foundational period of our nation, but, equally important, represent the subsequent development of American commerce, industry, and technology. In fact, the Quaker City figures prominently in the greater national history of municipal and public utilities. This contribution is more commonly known through a familiar landmark, the Fairmount Water Works, which embodies the city’s early commitment to providing clean water for its citizens. Built in phases between 1812 and 1872, this was Philadelphia’s second municipal waterworks. Designed in the classical revival style, it is an important and carefully preserved architectural and engineering landmark.

Although less known, the manufacturing of illuminating gas was also a significant, historic public utility, and PGW has lighted our streets and homes, heated our buildings, and cooked our food for nearly two centuries. Not only is PGW said to be the largest municipally-owned gas company in the country, it is among the oldest public utilities of its kind. 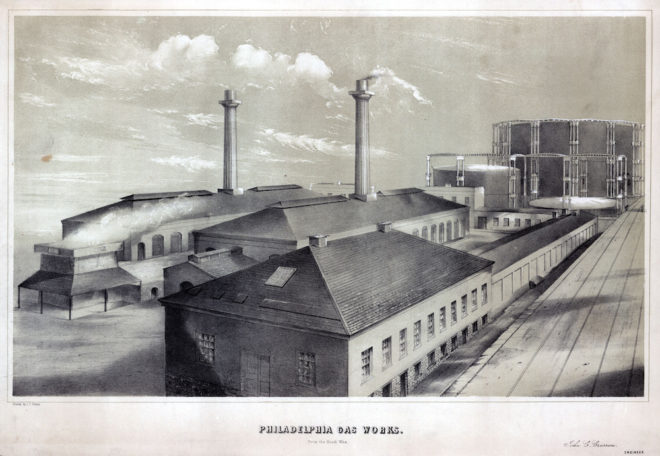 Just 15 years after its founding and the construction of its first (and long gone) gas works on the Schuylkill River at Market Street, PGW commissioned its second facility at Point Breeze. Between 1851 and 1859, an impressive industrial complex was designed and constructed. The Purifying Houses, known as “Church Row,” workshops, and a locomotive house all date to the first 25 years of PGW’s 185-year history. The entire facility was distinctively and poetically designed in the Gothic Revival style.

While linked originally with religious architecture in the 19th century, the Gothic style was also employed to ennoble secular projects, including Eastern State Penitentiary, built between 1821 and 1836, and the original Episcopal Hospital, constructed between 1860 and 1862. At the Brooklyn Bridge (1870-83), Gothic conveyed a sense of structural safety and stability to the hearts and minds of New Yorkers. While the connotation may not be obvious today, the Gothic Revival was applied to the Point Breeze Gas Works to instill faith in a relatively new technology, evoking the style’s potent associations with endurance and strength. The Gothic architecture of the Point Breeze Gas Works is the equivalent of the classical aesthetic of the Fairmont Waterworks, which had begun three decades earlier. Each in its time was an up-to-date expression of the importance of public service and the reliability of new technology. 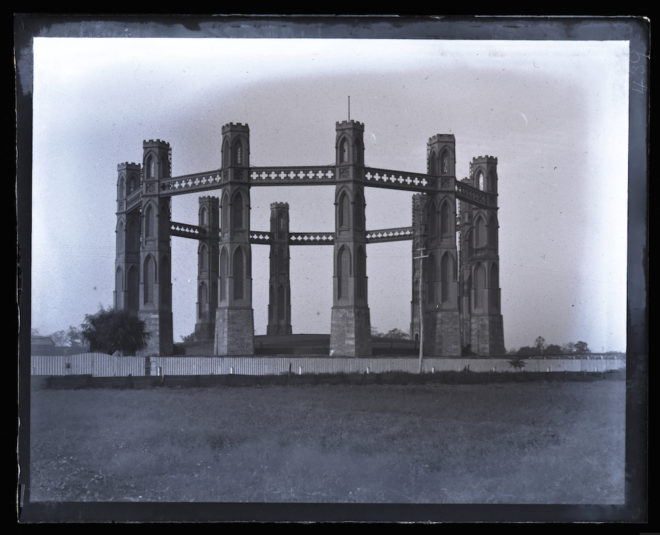 A glass negative from October 4, 1881 showing the Point Breeze gasometer of the Philadelphia Gas Works. | Image courtesy of the Library Company of Philadelphia

Unlike the legacy of municipal water service, celebrated at Fairmount, no historically designated industrial facility represents PGW’s incredible municipal legacy. The historic evidence of municipal gas companies includes the gaslights themselves, gas works buildings, and structures such as distinctive gas holders. In Philadelphia, the survival of such evidence is rare, and most of the buildings that composed the Point Breeze Gas Works have been demolished over time.  However, the few that remain signify PGW’s important early period of development.

The Keeping Society of Philadelphia’s nomination of the gas works included more buildings and structures than the Philadelphia Historical Commission staff initially recommended for approval. In March 2021 the Commission’s Committee on Historic Designation voted to limit the number of designated resources, adding only one building to the staff recommendation. This paring down may seem cavalier to some, but the approach is highly reasonable. It will preserve the most important resources with minimal impact on providing gas service to Philadelphians today and on the future use and/or redevelopment of the site. The structures proposed for designation constitute only approximately 0.66 acres or 1.2 percent of the 55-acre site, and Church Row occupies a mere 0.4 percent. 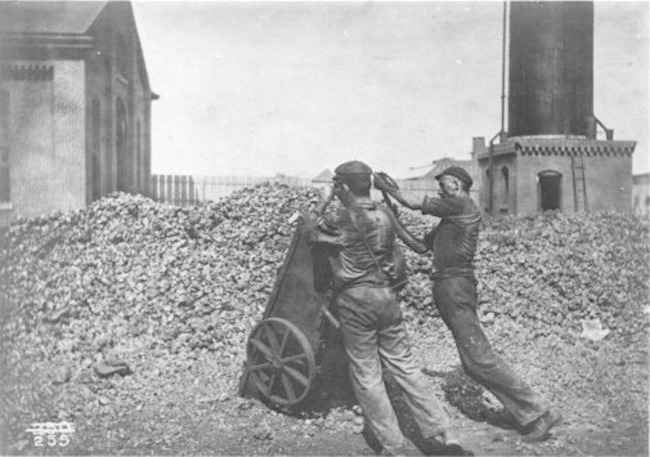 The historic designation of Church Row, along with a few other early and distinctive buildings of the gas works, will be considered by the Philadelphia Historical Commission in November 2021. PGW should reconsider its position and support the Designation Committee’s reasoned proposal. The older buildings of the Point Breeze Gas Works, including the distinctive Purifying Houses of Church Row, form a unique landmark of local and national significance. While not in the public eye at this time, none of us knows what the future may hold as the industrial sites of our city are repurposed. These buildings, if protected, can form the signature centerpiece of a new development, stand as picturesque monuments in a park, or even be adaptively reused to serve new technology as they did in the 1850s. As the city moves into the 21st century, preserving these unique landmarks will be a testament to Philadelphia’s tradition of technological innovation as well as PGW’s important position in that history.