There are different ways of telling the history of a place and time, such as through narrative, images, or objects. In the case of Philadelphia’s 20th century commercial history, a quirky collection that tells some of that story recently found a permanent home.

“I think of neon signs as an entrée into telling stories about pre-Internet Philadelphia,” said Len Davidson, neon designer and collector and founder of the Neon Museum of Philadelphia, which opened its new location in the NextFab building on North American Street in January. 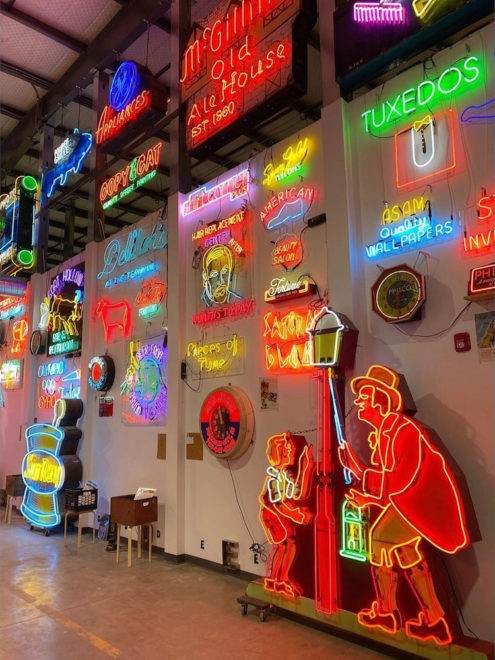 After years in the making, Len Davidson opened his Philadelphia Neon Museum to the public in January 2021. | Photo: Michael Bixler

“I have this huge collection that I want people to see, about 150 pieces altogether,” he went on. “And not just showing off the neon, but highlighting industrial history, roadside history, and Philly history.”

The main area of the museum contains about 90 neon signs, mainly from Philadelphia, dating mostly from the 1950s into the 80s, with another 25 scattered throughout the NextFab building. The display is augmented by period tin signs, neighborhood maps, diner menus and more. As a visitor approaches them, motion detectors turn the signs on. Info sheets give background on the sign’s history, fabrication, and original location.

Many items are from iconic old Philadelphia companies, like Philco radios, Horn and Hardart, and Pep Boys “I grew up in Philadelphia seeing these signs,” said Davidson. “Everybody in the 1950s saw this stuff.”

Philadelphia is often referred to as a city of neighborhoods, and Davidson thinks that explains the proliferation of neon signs post-World War II. “You had a city with a population of two million and still had mom-and-pop shopping areas,” he noted. “Every three or four blocks, and along the diagonal avenues, was a shopping street. It was easier then to open a business and not have to compete with big box stores.”

As a result there was a vibrant neon industry to supply those businesses. As Davidson’s interest in the craft grew, he sought out the remaining neon fabricators. “In 1979, I went to every sign shop that still existed and asked about their stories,” he said. “As I was learning, I realized I didn’t want to be a tube bender. I didn’t want to stand over fires, I wanted to talk to people about their signs.”

They had a certain style that attracted him. “I liked the folk art aspect of neon. The sign guys weren’t trained in the arts, but they were exposed to a sort of golden age of comics, so they created these images, rather than just doing plain lettering.” 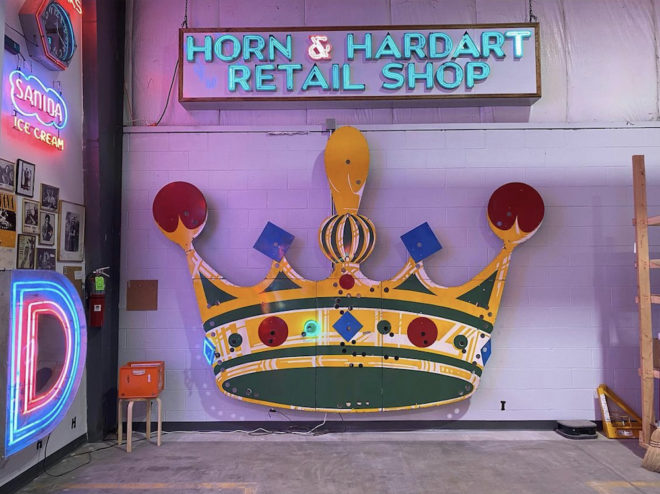 A sign from the 1950s advertising Horn & Hardart automats and the unmistakeable crown of Pat’s King of Steaks. | Photo: Michael Bixler

Especially fun are the animated neons, including a dancing Elvis, a camera with an opening and closing shutter, a dripping faucet, and one for the Hair Replacement Center, featuring a man’s head before (bald) and after (hair lights up). “I remember the guy who owned the sign bringing it into my shop to get fixed,” Davidson recalled. “I knew the creator was Joe Feldman of Ajax signs, a famous local sign maker. When the guy didn’t want to pay the cost of the repairs, I bought it from him.”

Davidson has continued the tradition of animated neon in many of his own designs, including the Trolley Car Diner, the Milk Boy kid, and Standard Tap’s Sausage Fest neon. Today, he’s joined in the work of creating custom neon signs and art by designers Alyssa Shea and Sam Conterato. 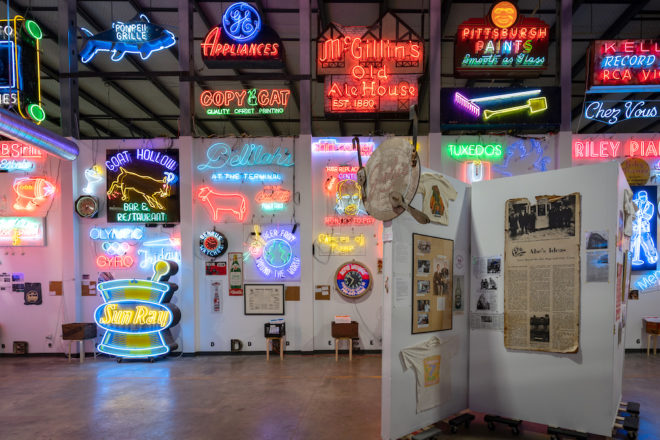 Joel Spivak’s new exhibition The South Street Renaissance, or How a Handful of Acidheads Brought South Street Back from the Ruins is on view at the museum through May 30 with extended hours into June currently under consideration by staff. | Photo: Michael Bixler

Continuing with his theme of highlighting eras of Philadelphia history, Davidson plans on offering special exhibits with guest curators. Currently on display is The South Street Renaissance, or How a Handful of Acidheads Brought South Street Back from the Ruins.

Just as the Neon Museum is the result of Len Davidson’s personal passion, the South Street exhibit hails from the collection of Joel Spivak, an architect and builder, Philly historian, and general artist about town who lived on South Street during the late 1960s and 1970s. It was intended to be part of the 50th anniversary of the South Street Renaissance, which would have been celebrated in 2020 if not for the pandemic.

The exhibit features posters for events that took place there, mostly in the 1970s, like street festivals, concerts, and plays. “It’s all from my collection,” said Spivak. “Every store I renovated, there were artifacts that had been left behind. I created a museum with it all.” The roster of his restaurant renovations includes some of the major players in Philly’s original restaurant renaissance, like Lickety Split and the Black Banana. 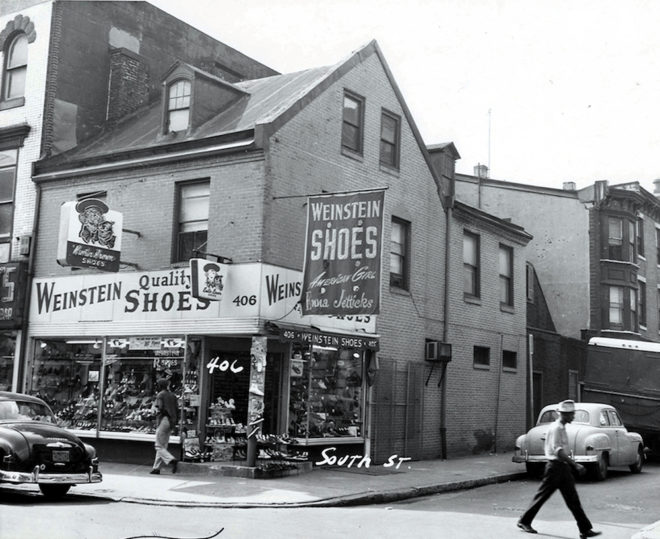 This neon Buster Brown shoe sign 4th and South Streets, pictured here in the 1950s, is among the Neon Museum’s vast collection of historic signs. | Photo courtesy of Joel Spivak

One of the most curious, perhaps ironic, items in the exhibit is an official tribute from the City of Philadelphia for the “South Street Renaissance,” signed by then-Mayor Frank Rizzo.

Although proposals for a Crosstown Expressway dated back to at least the late 1940s, over the ensuing decades resident opposition, lack of funding, disagreements over the route, withdrawal of mayoral support, all seemed to doom the project. Then, in 1972, one of Rizzo’s first actions upon becoming mayor was to revive it. 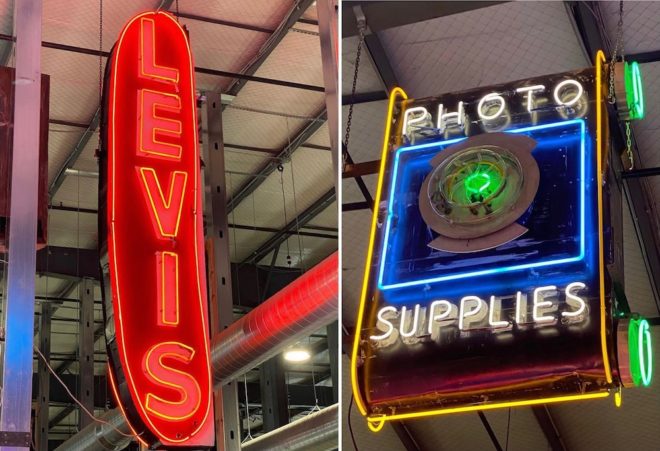 Spivak calls the collection “from pushcarts to hippies,” referring to the number of food pushcart vendors who operated there much earlier in the 20th century and the transformation to a hippie haven when the expressway plans caused a widespread devaluation and abandonment of real estate along the street.

The two eras came together in a play written by Tom Bissinger, artistic director of the Theatre of the Living Arts—in the 1960s an avant-garde theatre company–performed at the Painted Bride Art Center, then located at 527 South Street. Abie’s Last Stand recalled the last of the pushcart guys who operated a machine that ground fresh horseradish. “You had to bring your own jar,” Spivak noted. “At Passover, the lines would extend around the block.” 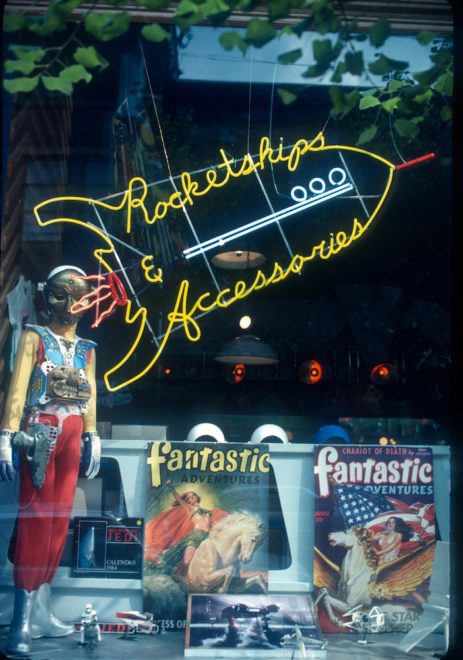 Joel Spivak’s old Rocketships and Accessories store on South Street was out of this world. | Photo courtesy of Joel Spivak

Although the South Street exhibit doesn’t specifically include any neons, there are several in the permanent collection that hail from the neighborhood including the ray gun from Spivak’s old store Rocketships and Accessories, the 13-foot Levis hot dog sign, the “Boho” neon from Judy’s café, the “D” neon from Dobbs, the winking Buster Brown Shoes sign from 4th and South Streets, and the skate shop sign from Zipperhead. The other neon from the latter, what might be the most well-known South Street neon, the Zipperhead man, is still owned by the shop’s founder.

The Neon Museum of Philadelphia is located at 1800 North American Street, Unit E. It is currently open for timed entries Fridays 4PM until 8PM, and from noon until 5PM on Saturdays and Sundays. It continues to have satellite displays at Drexel University’s Firestone Building, 32nd & Market Streets and the Center for Architecture, 1608 Walnut Street. The exhibition “The South Street Renaissance” runs through May 30, 2021, with extended hours into June currently under consideration. See museum ticketing and membership information HERE.