In Sharswood, Dox Thrash House Saved to Anchor a Neighborhood 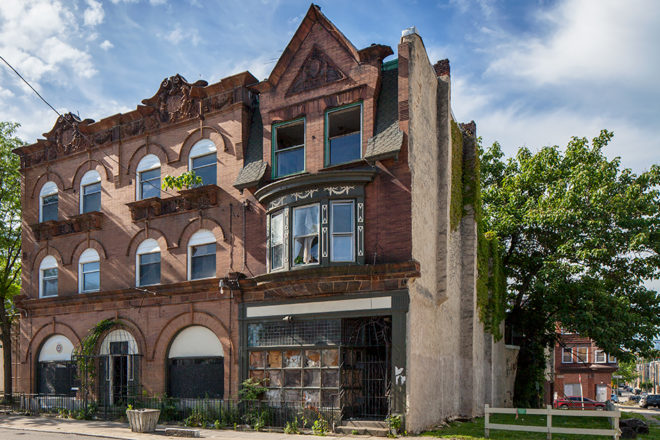 The former home and studio of Dox Thrash, pioneering printmaker and figure of the Philadelphia Black Renaissance, at 2340 Cecil B. Moore Avenue. | Photo: Peter Woodall

A significant landmark of Philadelphia’s African American history is closer to being preserved. Built in 1895, the Dox Thrash House at 2340 Cecil B. Moore Avenue has endured neighborhood disinvestment, civil unrest, a tangled title, and decades of vacancy and neglect despite being placed on the Philadelphia Register of Historic Places in 2013.

Born in Georgia in 1893, Dox Thrash was a painter and printmaker who moved to Philadelphia in 1925 after serving in World War I and attending the Art Institute of Chicago. In the 1930s, while working at the Fine Print Workshop of Philadelphia, supported by the Works Progress Administration’s Federal Art Project, Thrash and two colleagues devised a printmaking technique called carborundum mezzotint. “His efforts are significant. It’s a process that’s still used today,” explained Amelia Fontanel, vice president of programs with the American Printing History Association and Associate Curator at the Cary Graphic Arts Collection of the Rochester Institute of Technology. “It’s a method that took out a lot of the work preparing the surface of a printing plate. The result is a soft, atmospheric look, with gradations in tone.”

With his paintings, Thrash depicted Black Americans in a realistic and sensitive way. “What draws me in is that he was creating truthful images of Black life at the time,” said Fontanel.

Thrash lived in the house for a couple of decades before selling it in 1959 to Shaykh Muhammad Ali Hasan, founder of the Black activist organization, the National Muslim Improvement Association of America, which he headquartered in the building he owned next door at 2338 Cecil B. Moore Avenue, a stretch that was then still named Columbia Avenue.

After Hasan died in the 1990s the house remained in his name. His descendants, either unable or unwilling to attempt the lengthy and often expensive process of clearing the title, left the property vacant for years.

The situation lingered after the historic home was placed on the Philadelphia Register in 2013. “We knew of the owners, but didn’t know what was happening with the property,” recalled Kenneth Scott, president and CEO of the Beech Companies, a community development and social enterprise organization based in the neighborhood.

An avid history buff, Scott said his interest increased when he heard from the Preservation Alliance for Greater Philadelphia (PAGP), which had been the nominator of the house’s historic designation. “They told me about the ‘young preservationists’ who were also interested in the house,” remarked Scott. That was a reference to an ad hoc group of historic preservation students at the University of Pennsylvania. “We had been working on a project, learning about Sharswood,” recalled Dana Rice, one of the former students. “At the time the Philadelphia Housing Authority had just unveiled their plans for the neighborhood and we were looking for opportunities for preservation. The Dox Thrash House caught our attention as one of the few designated properties in the neighborhood.” 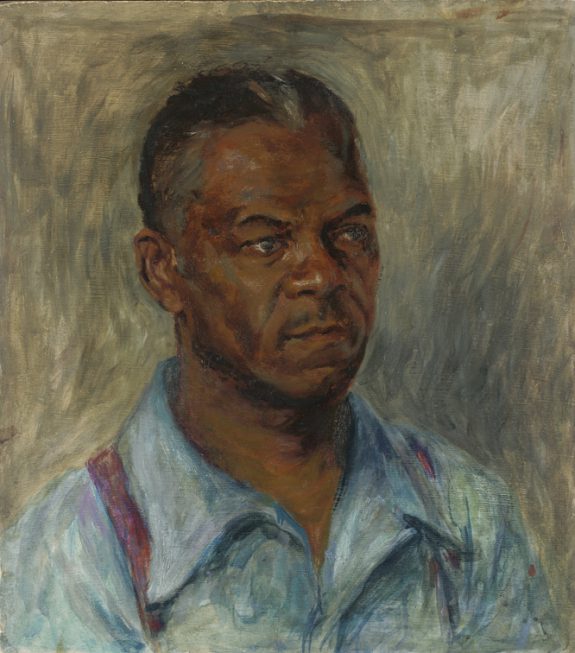 A self portrait by Dox Thrash completed in 1938. The artist would begin to gain attention that year while working at the Fine Print Workshop of Philadelphia for his signature printmaking technique carborundum mezzotint. | Image courtesy of the Pennsylvania Academy of the Fine Arts

The group discussed the problem of clearing up the house’s title, but as the Department of Licenses and Inspections (L&I) violations and delinquent tax bills piled up, the clock was ticking. “The City said it was on the demolition list and there was a lot owed in back taxes,” said Scott.

The City finally put the home up at Sheriff Sale in December 2018, but Beech was outbid by a North Jersey-based developer for $86,000. The house seemed destined to be torn down and replaced by a townhouse or condos as the gentrification of Brewerytown to the west crept closer to the Sharswood neighborhood. In the several years preceding, a half-dozen developers, mostly from out-of-state, had bought properties on the block. “A lot of developers are putting up crazy amounts of money and just sitting on properties,” said Scott.

Three months after the sale L&I declared the structure “imminently dangerous,” prompting the new owner to hire a contractor to brace the building and partially demolish the rear. When that work was completed, they put the house on the market with a $149,000 price tag. Its historic designation may also have been a deterrent. “Our understanding is that the developer didn’t know it was historically designated,” said Rice. “If not for that, without a doubt it would have been demolished.”

This time Beech was successful and gained title to the house in September 2020. The Dox Thrash House group launched a crowdfunding campaign to aid the purchase, raising funds to cover the $100,000 price and platform fees.

In April 2021, Beech received two grants towards the costs of restoration: $198,100 from a City of Philadelphia Commerce Department program called Neighborhood Funding Stream and $400,000 from the Pennsylvania Housing Finance Agency’s Community Revitalization Fund Program. The two grants will cover about half of the restoration costs. Scott says the group has been exploring other sources for the remainder.

Scott sees the building’s potential as a community anchor for the corridor. “On the first floor we are going to have a pop-up gallery space for organizations to use on a rotating basis,” he said. The top two floors will be affordable rental apartments, a priority in Beech’s mission, having already built or restored over 2,000 affordable units in their North Central district.

As for the preservations’ view, Dana Rice noted, “There haven’t been a lot of properties designated in this neighborhood much less across the city that reflect the time periods between the Great Depression through the middle of the 20th century.” Restoring the Dox Thrash House represents a broadening effort to save and preserve historic structures built within the last 100 years