Coasting Along Callowhill’s Bike Lane to the Past

There isn’t an edifice for blocks that overtakes its height, but the building is scarcely visible from any appreciable distance. Full sight of the repurposed, industrial structure at 448 N. 10th Street requires a ride through Callowhill’s less travelled capillaries. But up close, all secrecy fades and the building quite literally wears its history on its walls. A pair of whimsical bicycle sculptures cling to the east facade, and above those, a ghost sign boasts, “The bicycle with the national reputation.” The fading slogan is an artifact more than a century old, advertising the product of a company defunct nearly as long. 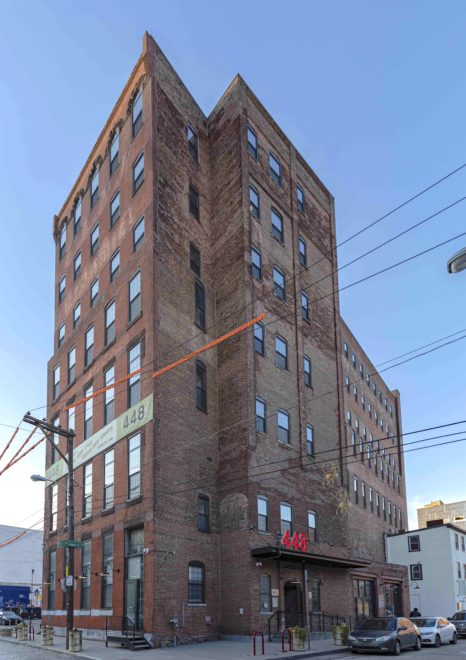 448 N 10th street as seen from the base of a yet to be rehabbed portion of the Reading Viaduct where it crosses above 10th and Hamilton Streets. | Photo courtesy of Arts + Crafts Holdings

The Haverford Cycle Company planted their seven-story brick and mortar flag on 10th Street between Buttonwood and Hamilton Streets in 1917. In its day, Haverford’s signature model, the Black Beauty, could be had for a dollar a week according to the vintage ad seen below. It was “built for the chap who wants the best and won’t take anything less.” But in the face of all assurances to the quality, affordability, and downright chap-worthiness of its product, the company did not survive the 1920s. Nonetheless, another ghost sign on the building’s northeast peak, a vertical one, now truncated to “Black Beau,” persistently hypes bikes to passers-by. 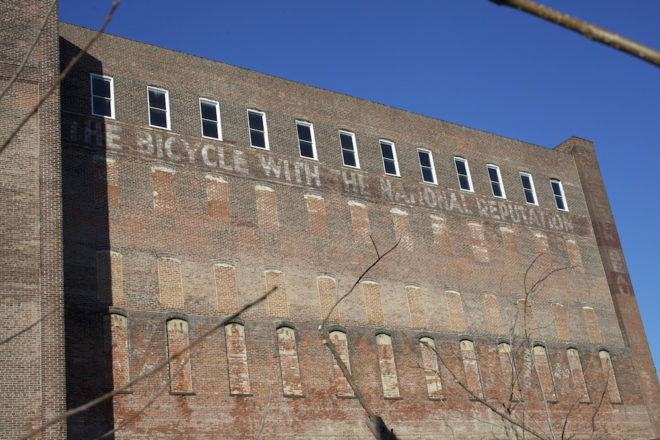 Old ghost signs are still quite visible on the facade of the former bicycle factory. | Photo: Peter Woodall

Real estate firm Arts + Crafts Holdings, rehabbers of 15 properties in the recently rebranded Spring Arts district of Callowhill, repositioned the vacant warehouse into creative workspace at a cost of around $5 million. “In general, we do love the fact that the entire community feels somewhat hidden and camouflaged. The fact that these buildings have sat under the radar for many decades without much love being shown upon them is sad. We take the role of breathing new life into these buildings seriously and welcome this opportunity of shining a light on the properties as well as the burgeoning community as a whole,” said Craig Grossman, general partner of Arts + Crafts Holdings.

“Once we discovered that the Black Beauty was produced by Haverford Bicycle, we decided that implementing it on and around the building felt right,” Grossman said. It’s in the building too. Arts + Crafts Holdings partnered with Philadelphia’s Boxwood Architects to flesh out the bicycle motif through the halls. 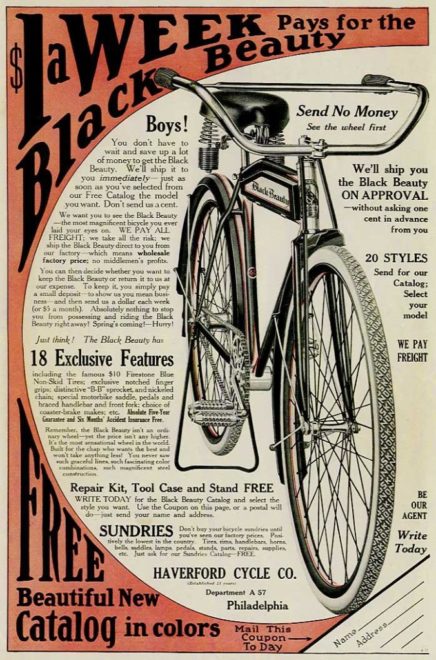 The building, an empty shell more often than not in its century-plus lifetime, has sporadically served other ends. The former Guckelberger and Co. used it to store pieces for the Philadelphia Museum of Art. Wannamaker’s, among other department stores, used it for the cold storage of furs. When Arts + Crafts Holdings took possession in 2015, stainless steel racks still remained fastened to walls and floors for that erstwhile function. Current tenants include RADIOKISMET, a podcasting studio where Grossman himself hosts the Spring Arts Podcast, and Made Institute, the fashion design school which saw one of its members, Saudia Islam, featured in a recent issue of Vogue for her knitwear brand, JBD Apparel. 100 years on, national reputations emerge anew. 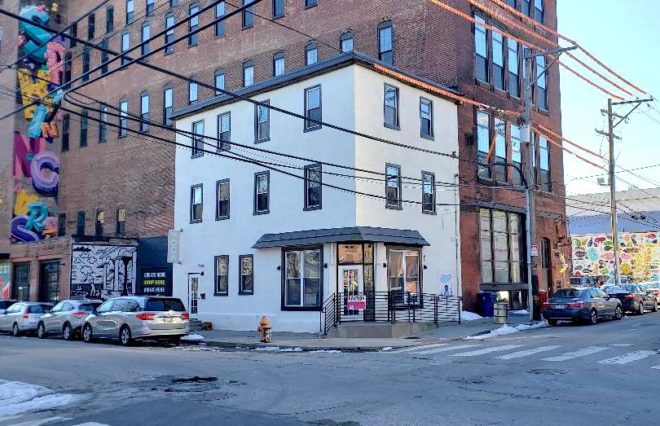 The white, 3-story building at the corner of 10th and Buttonwood Streets is connected internally and is undergoing construction along with its sister structure. | Photo: Don Schick

Neon numbers displaying the street address have become a staple at Arts + Crafts Holdings properties. The bright red 448 above the entrance on 10th Street was the first. Initially, the neon’s purpose here was to provide more street-level lighting, but it has become more symbolic than practical. “It’s a way for the buildings to communicate and for the neighbors and customers to recognize our commitment to the community,” Grossman explained. “I wanted to pay homage to the early makers who used neon, an art form that has been replaced by less expensive and more ‘efficient’ lighting sources.” 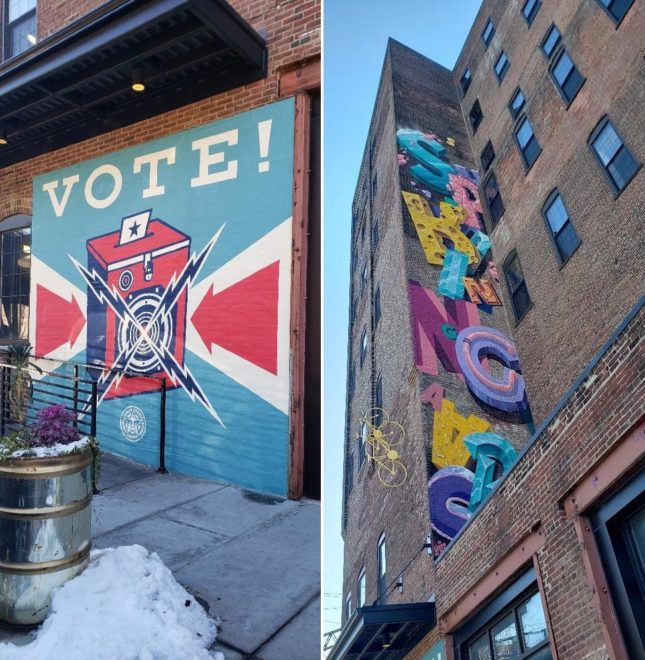 But it’s the VOTE! mural that really smacks you in the face. Even when seeing it for the first time, it seems palpably familiar. There is something about it–in the colors, in the style. Then it clicks. The style is very similar to the Barack Obama HOPE poster. Legendary street artist Shepard Fairey is the graphic designer famously behind that iconic work that went viral in 2008. Prior to the 2020 elections, Fairey sought a Philadelphia site for a mural. In coordination with Mural Arts Philadelphia, with which Arts + Crafts Holdings also has a partnership, Fairey selected 448 N. 10th Street. It is one of three striking murals surrounding the entrance along with local artist Joe Boruchow’s monochromatic work, Smoke Signals, and the towering Spring Arts by graffiti artist Glossblack. 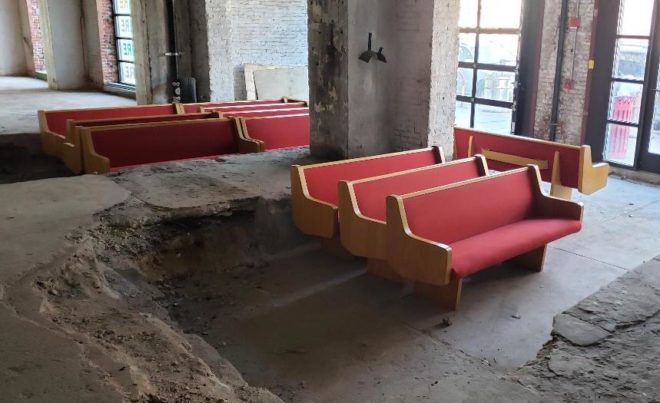 What’s next? No one is ready to hang a “Coming Soon” sign in the window just yet, but on the ground floor something certainly is afoot. The adjacent, three-story building at the corner of 10th and Buttonwood Streets is connected internally to its sister structure. According to the folks at Arts + Crafts Holdings, the spring of 2022 is targeted for the opening of, well, something. No one is talking specifics right now. A cluster of used church pews, presumably set for repurposing, await in the pit of an interior loading dock. Perhaps Spring Arts is getting a Star Wars-themed bar? Pew pew pew! Anyone? No? OK, probably not. 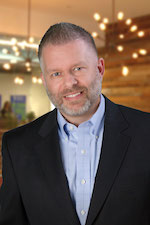 Don Schick Don Schick is a freelance writer and television producer. Originally from the Delaware Valley, he has worked for ESPN, The Sporting News, Fox Sports, and MLB Network. Recently returned to the area, he calls Collingswood NJ home, after living in Charlotte NC where he published a photo history of that city among other local history projects.