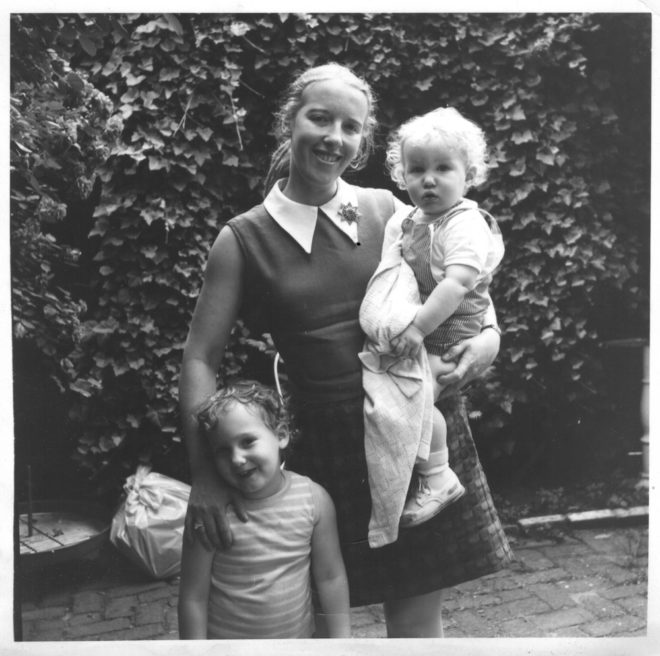 Three fun facts about my mother-in-law Polly Cohen: As an undergraduate at the University of Pennsylvania, Class of 1962, she was a member of the tennis, swimming, and bowling teams and also participated in the Penguinettes, a synchronized swimming troupe. She is a Cohen who married a Cohen. She was one of two women in her Temple Law School class.

The other woman in her class was longtime Philadelphia District Attorney Lynne Abraham. They began their legal studies in 1962, a time when female lawyers were rarities. Very quickly, the pair found themselves isolated. Not yet knowing the names of the men in the class, professors would call on “the man seated behind Miss Cohen” or “the man to the right of Miss Abraham.” To avoid such targeting, the men avoided sitting anywhere close to them.

By the end of the first year, Polly Cohen and Lynne Abraham were ranked #9 and #10 in their class, making them eligible for Law Review. My mother-in-law dropped off because she didn’t foresee competing for jobs at top firms. Abraham did harbor such ambitions and stayed on staff, often conflicting with her male counterparts.

My in-laws were married in the fall of Polly’s second year. Their wedding date was November 24, 1963. Needless to say, they spent their honeymoon in Miami watching television coverage about the assassination of President Kennedy.

Polly continued her studies, commuting to Temple from Center City either on the Broad Street Line or in Abraham’s tiny red Renault. By the middle of their second year, Polly was visibly pregnant. Professor Peter Liacouris, prior to becoming Dean of Temple Law School and then serving nearly 20 years as president of the university, was one of her instructors. She recalls once flubbing the answer to a question and Liacouris consoling her by saying that he was familiar with the volatile emotions of pregnant women.

My husband Michael was born in June 1964. In September Polly returned to Temple. She took some night classes so that my father-in-law Richard could watch the baby while she was in school. A babysitter was hired, and even Abraham helped to fill in the childcare gaps. After Polly graduated and it was time to study for the bar, Michael was sent to York, Pennsylvania for a few weeks to stay with his grandparents.

The next few years were busy ones, as Richard launched his career as a real estate appraiser and Polly worked part-time as a law clerk. My sister-in-law, Meg, was born in 1967 and brother-in-law Peter in 1969. Although Polly took a hiatus from legal work following Peter’s birth, the purely domestic life was not for her.

The front page headline of the November 11, 1971 issue of the Center City Welcomat reads, “She’s Got Kids and a Cat, But Has Time for Politics.” The article is about the ouster of an incumbent ward leader by a new, progressive slate of committee people, including my mother-in-law who is described in the article as follows: “Polly Cohen is a 31-year-old housewife who has a law degree, husband, three children, and a cat. She hardly looks like a ‘militant obstructionist,’ but that’s what one Center City politician called her when she stuck her blonde head into eighth ward politics.” 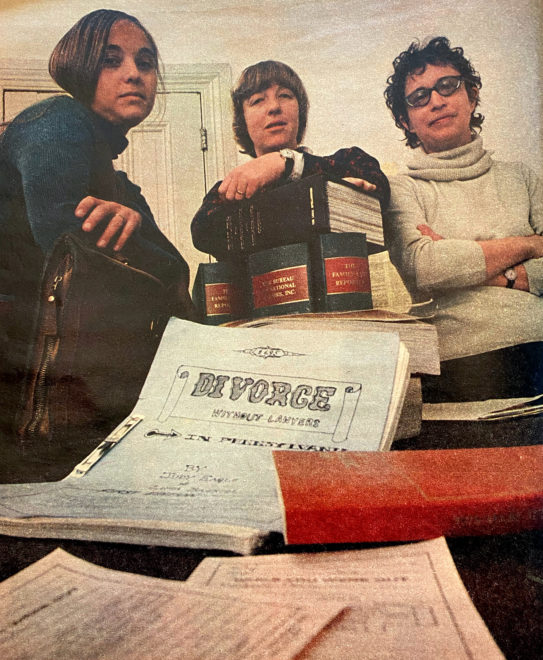 Although Polly was ahead of her time by going to law school in the early 1960s, 10 years later the Women’s Liberation movement was breaking barriers and reordering gender norms. Another lawyer, young mom, and political activist, Babette Newberg–later known as State Representative Babette Josephs–wrote to the Philadelphia Inquirer to complain that an article about a 1971 speech by Gloria Steinem was in the “For and About Women” section. “Would you name a section of your newspaper ‘For and About Blacks’ and report there and only there that Reverend Leon Sullivan endorsed Longstreth for Mayor?” asked Newberg.

The early 1970s were a high-water mark both nationally and locally for the energized “second wave” feminist movement. Ms. Magazine was launched in the final month of 1971. In 1972, Congress approved Title IX of the Education Act which bans sex discrimination at schools and educational programs that receive federal funds. The Equal Rights Amendment passed both the House (1971) and the Senate (1972) and appeared to be on a glide path to ratification. In 1973, the Supreme Court issued the Roe v. Wade decision legalizing abortion, AT&T agreed to pay $15 million in back wages for discrimination based on sex and race, Billie Jean King defeated Bobby Riggs in the “Battle of the Sexes” tennis match, and Philadelphia newspapers agreed to stop separating Help Wanted ads by gender. In 1974, Jessica Savitch was one of the first woman to anchor the evening news, and a female student sued to attend Central High School. When the lawsuit was finally resolved in 1983, Babette Josephs’ daughter Lizzie Newberg was one of the first five young women to go to Central.

The album “Free to Be…You and Me,” a collaboration between actress Marlo Thomas and the Ms. Foundation for Women, was teaching children like the Cohen kids, the Newbergs, and me that “Every boy in this land grows to be his own man, in this land, every girl grows to be her own woman.” We learned that it was terrific if William wanted a doll and that girls who played up their delicate femininity were likely to be eaten by tigers.

It was in this heady atmosphere of female empowerment that Polly Cohen, Babette Newberg Josephs, and Janice Volkman launched their all-woman law firm. Janice (née Cohen) was accepted to law school before graduating from Brandeis University in 1967. Her entry was delayed by several years while her future husband completed his medical studies as one of a small number of white medical students at Howard University. The couple then moved to San Francisco where Janice worked for HUD and her husband Eddy spent three years working for the public health service as an alternative to the Vietnam War draft.

By the time Janice started New York Law School, part of Pace University, in 1972, she had a daughter. Like Polly, Janice made Law Review, but quit since she didn’t want to take on extra work given the time challenges of being a mother, wife, and full-time law student. The Volkmans relocated to Philadelphia in 1974. Janice had another daughter and commuted to New York while still breastfeeding. She once asked if she could give a mock trial presentation in the morning rather than the end of the day to avoid the discomfort that was inevitable before the invention of the breast pump. Her professor, who didn’t think she had any business being in law school, refused her request. To her great relief, she was permitted to complete her final semester at Penn Law.

Polly, Janice, and Babette Newberg Josephs joined forces. They rented an office space at 1933 Chestnut Street, hired a secretary, and clients came pouring in. Most were referrals from the constellation of women’s self-help organizations that had been organized during this time of feminist resurgence. Women Organized Against Rape, Women Against Abuse, the Women’s Law Project, and others sent clients looking for legal advice related to custody, child support, protection from abuse orders, divorce, and so forth.

Janice and Polly recall those years as busy and meaningful. They were not, however, financially enriching. It was easy for them to attract clients, but much harder to get clients to pay. Most of the women helped by the firm were poor, and the trio of attorneys didn’t want to turn away people in need of legal advice. They earned enough to cover the rent and the secretary’s salary, but that was about it. Without the incomes of their professional husbands, the whole enterprise may never have gotten off the ground.

The ethos of the law firm is captured in a 1977 cover story called “Divorce Without Lawyers” in Discover, the Sunday magazine of the Philadelphia Bulletin. “Attorney Polly Cohen (whose firm is willing to sell the do-it-yourself guide alone, or offer legal advice by the hour or whatever is best suited to the client) says some clients simply refuse to believe the service can be a quality one if they are not paying a ‘quality’ price. Some prospective clients gaze with misgivings at the less-than-plush fittings of Cohen’s office and become fidgety at the law firm’s less-than-plush fees. ‘Are you really lawyers,’ they will ask. Or: ‘Does it take longer this way?’” 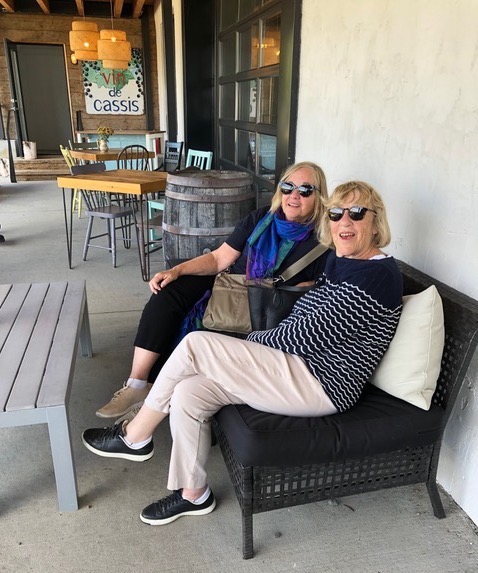 As the 1970s came to an end the law firm shut down. Given that the Equal Rights Amendment missed its 1979 ratification deadline, it was a fitting time for their work together to come to a close. My mother-in-law was recruited to serve as chief of health in the City Solicitor’s office during the administration of Mayor Bill Green. Janice worked for the Veteran’s Administration and the Equal Employment Opportunity Commission. She eventually became a federal administrative law judge. Babette Josephs continued her activism and served as state representative from 1984 to 2012.

Although the firm was not long-lived, its existence is significant. Each of the partners went to law school at a time when female lawyers were few and far between. Between the three of them, they had seven young children, but they were determined to work for the greater good. They were role models for their children and also for the female attorneys who followed in their footsteps.

Today, Temple University’s Beasley School of Law is 55 percent female and 40 percent of the law professors are women. All three divisions of the Philadelphia Court of Common Pleas are currently headed by female judges, two of them women of color. The chancellor of the venerable Philadelphia Bar Association, the oldest association of lawyers in the country, is a woman. Berner Klaw & Watson, a Center City boutique family law firm established in 1994 of which its founders, partners, associates, and law clerks have all been women, recently made a radical move. In 2019, close to three decades after they opened their doors, they hired their first male attorney.