Hidden City’s annual feature, Lost Buildings, provokes an inevitable mixture of sadness and rage in a city where too many worthy buildings regularly fall to the wrecking ball. Yet, it is important to know that there are always two sides of the same coin. Many impressive and important preservation success stories are there for the telling, but are too rarely told.

Each year Philadelphia produces a great many noteworthy restoration, rehabilitation, and adaptive reuse projects, which are celebrated annually at the Preservation Alliance for Greater Philadelphia’s Preservation Achievement Awards. This year’s awards program will be held virtually on June 9.

Here, then, is a representative list of noteworthy “Saved Buildings of 2020” that the Alliance is honoring this year. Several took advantage of federal historic tax credits, low income housing credits, or other financing vehicles. In every case, careful reinvestment has breathed new life into structures that were nearing the end of their useful lives and in need of a timely infusion of creativity and renewed purpose. As preservationists, we can be proud that our city produces such incredible transformations such as these. 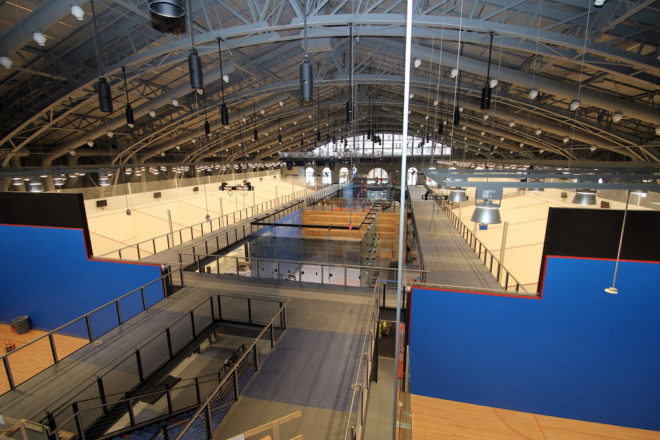 Located on the campus of Drexel University, the rehabilitation of the drill hall at the Philadelphia Armory offers a new angle on what it means to “serve.” Originally the home of the 103rd Engineer Battalion of the Pennsylvania National Guard, which traces its lineage to Benjamin Franklin, the massive trapezoidal building was designed in 1916 for guard training. U.S. Squash, the governing body for the sport, seized the impressive architecture and voluminous interior to create a world-class facility that is innovative, stunning, and steeped in history and crosscourt volleys. Windows were replaced and new east and west entrances dramatically increase the natural light. A full-height reception area is separated from the courts by a video screen wall adjacent to meeting rooms and offices. This building will host the major events on the U.S. championship calendar. Fans on site and around the world will be able to follow the action in Philadelphia in a way not before possible. Senator Arlen Specter, who had a deadly backhand himself, would be very proud. 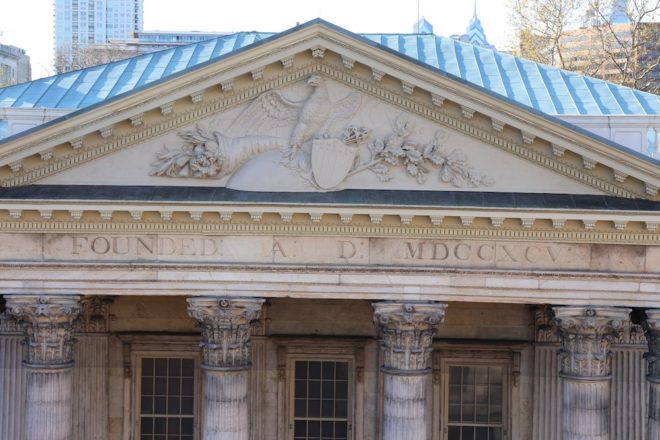 The First Bank of the United States tympanum sculpture in Old City. | Photo courtesy of the Preservation Alliance for Greater Philadelphia

The First Bank at 3rd Street below Chestnut Street is the oldest structure built by the federal government still standing in the United States. Dating back to 1797 and owned by the National Park Service, this building has been closed to the public for years. The first step in its ongoing rehabilitation was the restoration of the tympanum sculpture on the 3rd Street facade. This mahogany sculpture has survived 225 years of outdoor exposure and is one of the first representations of the American bald eagle as a national symbol. Evaluation revealed numerous painting campaigns, unstable surfaces, and cleaving and cupping of the wood substrate. Paint was carefully removed, loose elements stabilized, and decay-resistant patches applied. While making the repairs, an enclosure was built around the pediment, with an inner plastic tent containing an air conditioner, dehumidifier, and HEPA-filtered air scrubber. Keeping the environment dry and stable helped to lower the moisture content of the wood substrate, promoting the longevity of the newly applied, thin coats of paint. This is an important first step in the restoration of the entire historic building. 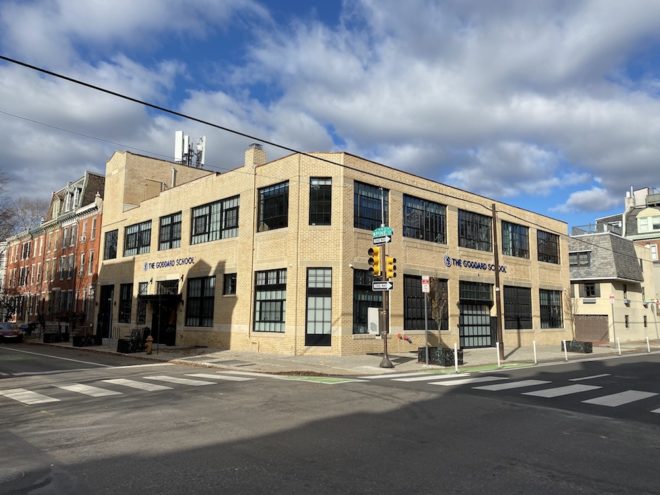 The Goddard School in Fitler Square. | Photo courtesy of the Preservation Alliance for Greater Philadelphia

This adaptive reuse project near Fitler Square transformed a dingy and crumbling 1925 parking garage into a modern learning environment. Two driveway entrances were infilled with industrial window systems to become a welcoming front door and service entrance. Classrooms were positioned around the perimeter of the building to give children access to sunlight. The amber brick exterior, badly discolored from years of neglect, was deeply cleaned and now virtually glows in the morning sunshine. In a procedure that Pine Street neighbors will not soon forget, the old car elevator was lifted by crane and held aloft for some time while the team worked feverishly to decommission the dangerous springs, hoist beams, and metal ropes. The old elevator was replaced with a passenger elevator and new steel stair. Thoughtful design and collaboration allowed many historic elements of the structure to be preserved and celebrated, while also providing a use that serves the community well. 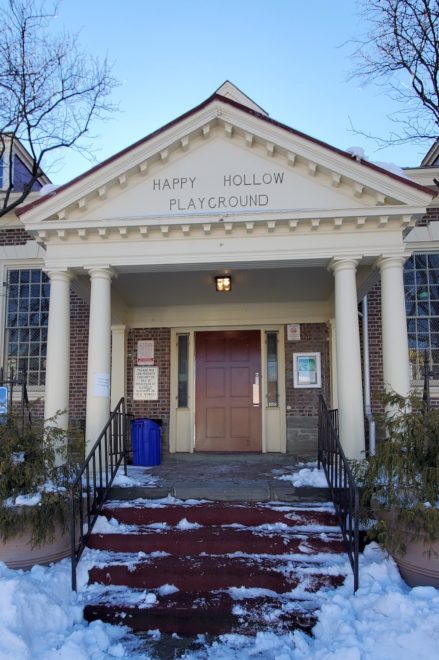 The Happy Hollow Recreation Center in Germantown. | Photo courtesy of the Preservation Alliance for Greater Philadelphia

The progressive Playground Movement of the late 19th century endeavored to improve the moral, psychological, and physical wellbeing of children living in cities. Edward and Lydia Clark, philanthropists whose banking empire was the predecessor of Penn Mutual, were early adopters. They engaged George Pearson, architect of their estate in Chestnut Hill, to design the Happy Hollow Recreation Center on four acres in Germantown. Happy Hollow has been in continuous use since 1911 and has advanced more than a few basketball and boxing careers. This rehabilitation project replaced most of the cornice, gutter, and drainage systems of the main building. Work also involved cleaning and repointing the masonry, restoring the porch, and making all windows operable, including the celestial gym windows, which are now remote-controlled. Once enjoyed exclusively by children, Happy Hollow is now a haven for healthy programming year-round for the entire community. 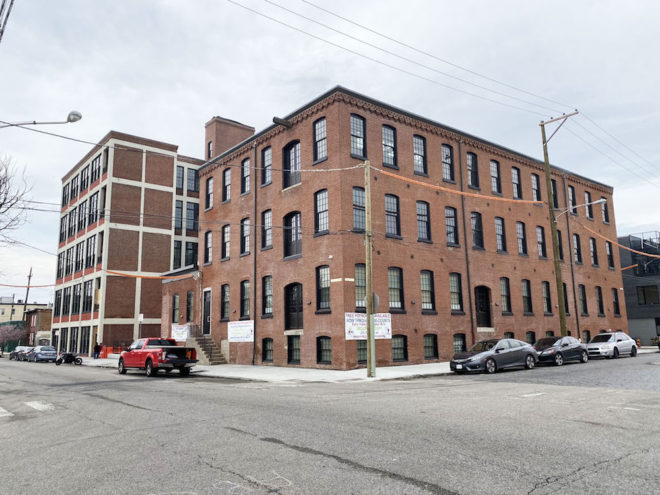 Huntingdon Mills in Kensington. | Photo courtesy of the Preservation Alliance for Greater Philadelphia

In the late 19th and early 20th centuries, while elegant high-rises were springing up like top hats in Center City, the Workshop of the World was still on the job several miles north. In Kensington, carpet manufacturing was king. There were more than 140 carpet companies in Kensington in 1882. One of them was the Franklin Carpet Mill on Huntingdon Street. Well known for its quality products, Franklin thrived for decades before the looms fell silent. Through a sensitive restoration and repair of historic features, the mill complex has been converted into apartments for social workers, therapists, nurses, and others working in health and human services. An addition connects the older structures. The complex contains an early childhood education center, offices for nonprofit organizations, shared conference rooms, break room, community lounge, landscaped and programmed courtyard, fitness center, and on-site café. In a neighborhood where new construction regularly replaces historic buildings, this project has preserved an important component of the city’s industrial heritage for another century. 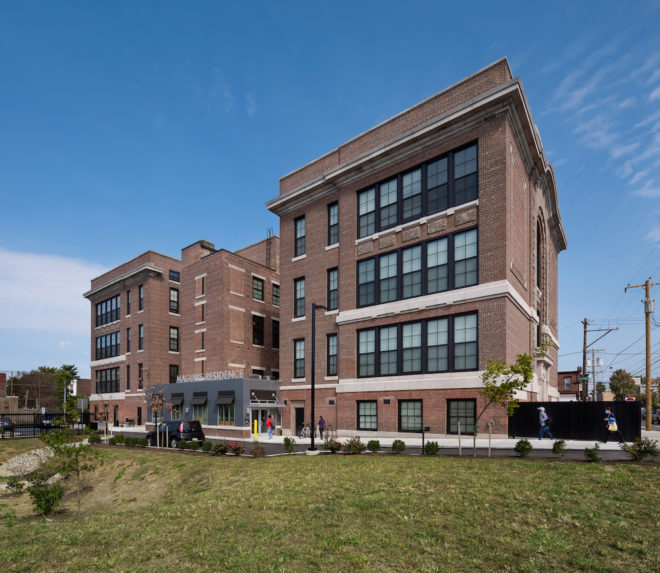 Maguire Residences in Kensington. | Rendering courtesy of the Preservation Alliance for Greater Philadelphia

Originally built as Willard Elementary School, this building was designed in 1907 by Philadelphia architect Henry deCoursey Richards. It is among 28 of Richards’ schools listed on the National Register of Historic Places and the first to incorporate fireproof construction using reinforced concrete. The Classical Revival style lends itself well to apartments as well as schools. This renovation provides much-needed, high quality affordable housing in Kensington. It will serve those who are homeless or recovering from drug addiction and is staffed by outreach workers, case managers, and healthcare professionals. Accessibility was enhanced at entrances. With the insertion of an elevator and new building systems, the project was also designed for optimum energy efficiency. The elegance of the architecture and historic detail is an important part of encouraging residents’ pride of place and in their own potential. 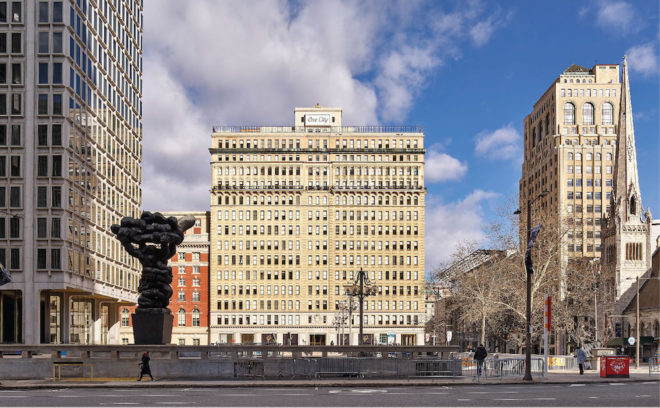 One City in Center City. | Photo courtesy of the Preservation Alliance for Greater Philadelphia

In 1899, the headquarters of the United Gas Improvement Company (UGI) opened at 1401 Arch Street in Center City. UGI founder Peter Widener, also a major force in the U.S. Steel and the American Tobacco Company, hired the renowned architecture and engineering firm of the Wilson Brothers to design a 14-story headquarters a block north of City Hall. The Renaissance Revival, steel-frame structure was clad in brick and terra cotta and was one of a number of impressive office buildings that reflected Philadelphia’s rise as an industrial power in the late 19th and early 20th centuries. To convert the building into apartments without losing the historic character, all 1,100 original double-hung windows were refurbished. Completely new building systems were inserted. Facade renovations included new copper flashing, masonry and terracotta repointing and repair, the preservation of renowned ironworker Samuel Yellin’s monumental cast-iron gates, and the creation of new amenity spaces on the roof. Inside, drop ceilings, vinyl flooring, and commercial carpeting were removed to expose historic coffered ceilings, marble and travertine columns, ornate plaster, and historic millwork. This project returned a masterpiece to its proper prominence in a neighborhood of impressive early skyscrapers. 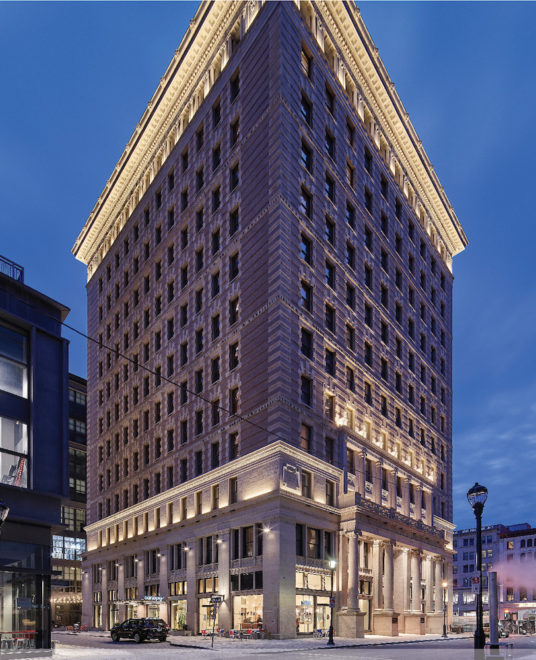 Designed by prolific Philadelphia architect James H. Windrim in an iconic Beaux-arts style, the Stephen Girard Building was among the first high-rise projects in Center City. Built by the Girard Estate, the 13-story, granite, brick, and terracotta structure was completed in 1896. It housed the offices of the Board of City Trusts, which was charged with managing Stephen Girard’s great wealth. Windrim, a graduate of Girard College himself, was the official architect of the Girard Estate, a plum job that kept him and his son, John T. Windrim, busy for decades. The Girard building has now been converted into a hotel as part of a massive, mixed-use development that is transforming the entirety of Girard Square. The exterior of this Philadelphia icon has been beautifully restored with decades of grime removed. Classical cornices, pediments, and sculptural caryatids have been refinished and are now illuminated at night. Two original window bays with egg-and-dart molded bronze frames were preserved and then replicated with a cast of the originals. The original storefronts were recreated, and the main entry to the hotel was repositioned onto Ludlow Street. The reconstructed entry closely follows Windrim’s design, using granite to match the original stone, frameless doors, and the return of a long-demolished tympanum window. 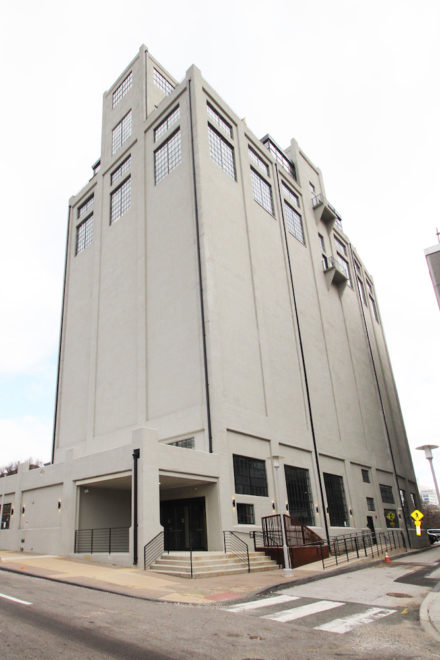 Name: The Tidewater in the Art Museum area

This distinctive structure was built as a grain elevator built in 1925 by the Reading Railroad with its tracks running along the north side of the building. Philadelphia was an important center for the distribution of grain from the Pennsylvania hinterlands, and this building is a fortress. Each of the interior silos are surrounded by 15-inch reinforced concrete walls that are concealed by 12-inch-thick exterior walls–that is to say, the center of the building is unusable, albeit fireproof. Successfully adapting the building–now renamed The Tidewater–has been a tough row to hoe, but the rehabilitation has restored the industrial landmark gloriously. The first two floors have been converted into retail space, and the top three floors are now 24 apartments. Critical facade repairs were completed, then covered with a vapor permeable paint to prevent further damage to the concrete. Many of the steel factory windows were reparable, and completely new mechanical, electrical, and plumbing systems were installed, allowing the building to function just as well as a newly-built structure.

Rosemarie Fabien contributed research and writing to this article. 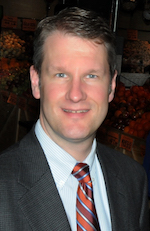