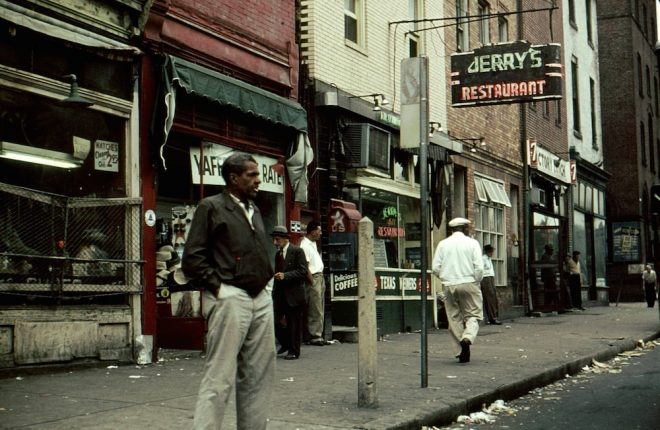 821-831 Vine Street in 1964. From left: Jerry’s restaurant, the Francis Hotel, the Victory luncheonette, and the Galilee Mission were all present in the early 1950s. | Photo: Dr. Brian H. Davies, courtesy of Matt Davies

Results of the 1950 election for Pennsylvania’s Third Congressional District were tight. Republican Hardie Scott won by 925 votes in this district, which stretched from Center City to near North Philadelphia and into the River Wards. Maurice Osser, Scott’s Democratic opponent, cried fraud. Osser demanded the rejection of returns from select ward divisions due to irregularities in the “flophouse vote.” In effect, Osser charged that Skid Row stole the election.

Philadelphia’s Skid Row was located between Arch and Callowhill Streets and 5th and 12th Streets—deep in the Third District and mostly in what was then the 10th Ward. In the 1950s this was an enclave of seedy bars, flophouse hotels, religious missions, and other commerce catering to about 3,000 homeless men. The destitution of Skid Row was what was left of the wages of sin from when this area was the Tenderloin vice district. In turn, vague plans for building a cross-city expressway over Vine Street foreshadowed Skid Row’s imminent demise. 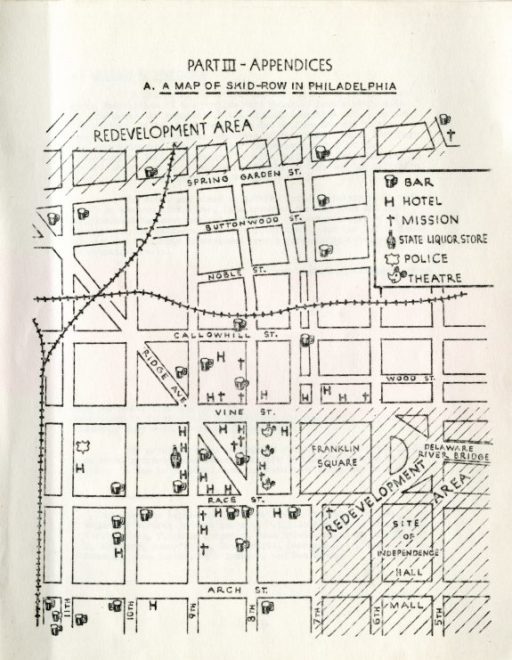 The stigma of Skid Row flowed from the men–known as derelicts, bums, and winos–to their votes. Researchers portrayed the Skid Row man as too asocial, apathetic, and alcoholic to bother with voting. “Whatever else he may be,” wrote sociologist Theodore Caplow, “the Skid Row man is not his brother’s keeper. Nor his brother’s opinion-leader, norm-enforcer, or action-initiator. That is to say, he is about as different from Homo Sociologus as it is possible to be while still remaining human.” From a lay perspective, what social scientists called “disaffiliation” translated to a mix of failure and alcohol, and to the belief that the Skid Row man’s vote would go to whoever was first to buy him a drink.

Collectively, Skid Row votes became the “flophouse vote.” At its peak, Philadelphia’s Skid Row had at least 17 flophouse hotels. These establishments typically occupied the top floors of store fronts or were converted industrial buildings that consisted of a lobby and warrens of cubicles that, according to one contemporary account, measured “about six and one-half feet by four and one-half feet in size. A partition six to seven feet high, leaving one foot to several feet above for ventilation, separates each bed from the next.” Cubicles rented for 35 to 60 cents per night. For many of the men who stayed there, this was all that kept them from literal homelessness. The flophouse also provided a stopping point, however brief, for a rootless clientele and the opportunity for them to register to vote. Many moved on after registering so that, by the time Election Day came, the Skid Row precinct voter rolls contained hundreds of “phantom voters” who no longer stayed at the addresses at which they registered. 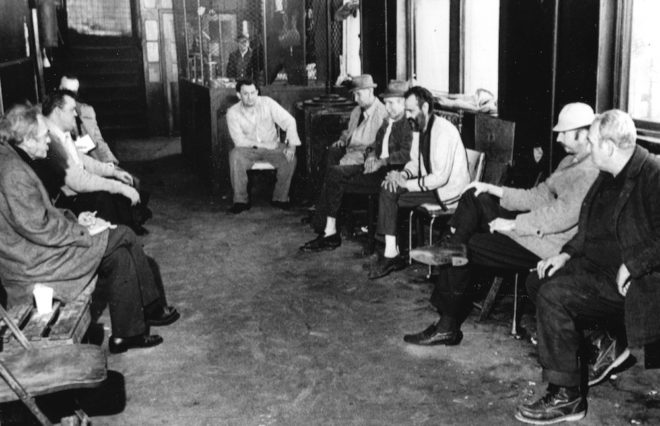 The lobby of Darien Hotel at 325 N. Darien Street in 1976. Residents of “flophouse” hotels would register to vote and would move before Election Day. Their names on the voter rolls were pointed to as “phantom voters. | Photo: Author’s collection

Hotel owners were active in the local Republican party and presumably organized these votes. Among them were the Weingrads, with Leon operating the Prospect Hotel at 827 Race Street and his older brother Albert serving as an “inspector of voting registration” until his indictment for violation of election laws. Abe Manoff, who owned the Royal Hotel at 207 N. 9th Street and the Palace Hotel 824 Race Street, served as a Republican 10th Ward committee member. Gilbert Golden, another 10th Ward Republican committee member, was part of a family that owned three hotels. Two of these, the Golden Hotel at 730 Race Street and the Highway Hotel at 812 Vine Street, were polling places in early 1950s. Along with his hotel duties, Golden worked at the City’s Board of Revision and Taxes. This meant that he worked under William Meade, the chairman of both that board and the city’s Republican Party. Meade’s power base emanated from his deep roots in the 10th Ward and extended into the city’s river wards.

But by 1950 the once mighty Republican machine was sputtering. A resurgent Democratic Party was calling for reform and none so louder than City Treasurer Richardson Dilworth. Dilworth showcased Meade’s 10th Ward connection to Skid Row as emblematic of Republican corruption, accusing Meade of running “a midcity empire … founded on contributions from the concentration of flophouses, after-hour saloons, houses of ill-repute, and one-man clubs.” On Election Day, Dilworth charged, the city’s Republican machine hardly bothered to cover their use of phantom votes and simply “returned all occupants of large flophouses as having voted in alphabetical succession.” 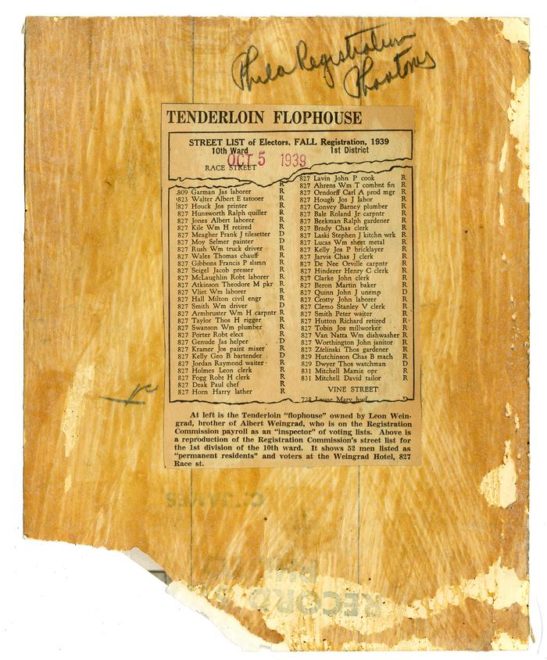 A list of alleged “phantom” flophouse voters from Prospect Hotel at 827 Race Street in 1939. | Image courtesy of the Historical Society of Pennsylvania

The 1950 Third Congressional District race called the question of whether the flophouse vote could actually sway an election. This was a rematch of the 1948 contest between Scott and Osser, both of whom were lawyers active in ward politics. Scott, who easily won this seat in 1948, had a shakier position in 1950 due to the gaining Democratic Party and fallout from his anti-labor voting record. But he hung on to the congressional seat by 925 votes.

Osser maintained that the phantom vote from the “flophouse area” provided Scott with his narrow cushion and called upon Congress to invalidate the election. The Senate Elections Committee, chaired by Democratic Iowa Senator Guy Gillette, held public hearings in Philadelphia on phantom voting, thereby “deserting the graveyards,” as per a wry Philadelphia Inquirer editorial comment, and investigating whether “the voting spirits are now to be found in cheap lodging or flophouse areas.” 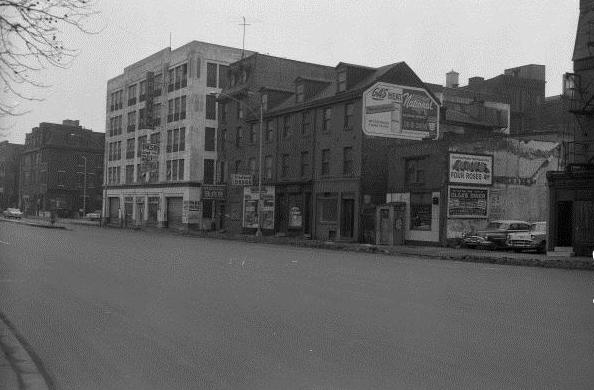 The Golden Hotel (the buildings to the right of white building) at 728-730 Race Street was used as a polling place for the 10th Ward, 1st Division. This photograph was taken in 1960 right before demolition began to make way for the Philadelphia Police Administration Building (aka the Roundhouse). | Photo courtesy of PhillyHistory.org

Gillette’s committee found numerous persons on the voting rolls who were no longer at their given addresses, including 1,299 names registered at Skid Row hotels that had records of only 635 persons. However, investigators were unable to link these registrations with enough actual votes to where they could have impacted the election, and Osser’s claims were dismissed as hearsay. The House Elections Committee subsequently voted unanimously to disallow Osser’s petition.

In a post-mortem investigation, Pennsylvania’s Registration Commission asserted that while the Skid Row man’s “idiosyncrasies are undesirable, his right to vote is as inviolate as that of the man with more conventional habits.” While the commission acknowledged the challenges of maintaining current voter rolls amidst the transience of this population, they also minimized this as a threat to fair elections.

In retrospect, Scott’s reelection was but a speed bump on the Democratic Party’s road to political dominance in Philadelphia. Democrats flipped the Mayor’s office in the following year. Dilworth then became mayor in 1955, and the subsequent Democratic mayoral succession continues to the present. Scott quietly resumed his legal practice after Democrats captured his congressional seat in 1953. Osser, on the other hand, became a stalwart cog of the emergent Democratic machine, holding the office of County Commissioner from 1951 until his 1972 conviction for bribery and mail fraud. Meade’s fortunes would remain bound to Skid Row. In 1952 he survived a sensational assassination attempt at the bar of the Minerva Hotel, a flophouse on 122 North 10th Street. 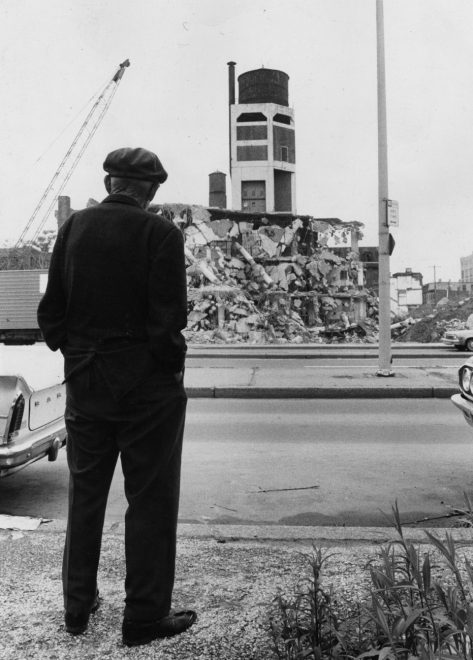 A resident of Skid Row watches the demolition of a building at 8th and Vine Streets in 1973. | Image courtesy of the Special Collections Research Center, Temple University Libraries

Skid Row’s fortunes would decline steadily over the next quarter century as urban renewal projects cut into the area’s footprint. Flophouses fell victim to eminent domain and their erstwhile clientele moved on. Homelessness in Philadelphia has, of course, both outlived Skid Row and outgrown its geographic confines. Among today’s homeless population, if people register to vote they most often do so using addresses of several nonprofit organizations that have provisions for them to receive mail. About 260 registered voters use the address of St. John’s Hospice at 1221 Race Street, one of two surviving homeless shelters with roots extending back to the Skid Row era.

Concern about the perceived menace of the flophouse vote has disappeared with the flophouses themselves. However, vague apocryphal stories from elections past linger about local machine apparatchiks with ambiguous party affiliation harvesting homeless votes with the help of a ready supply of alcohol. With this, the taint of the Skid Row vote still echoes in the current innuendo that “bad things happen in Philadelphia.” 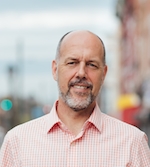