A Year in Ruins: Battling the Pandemic for 365 Days 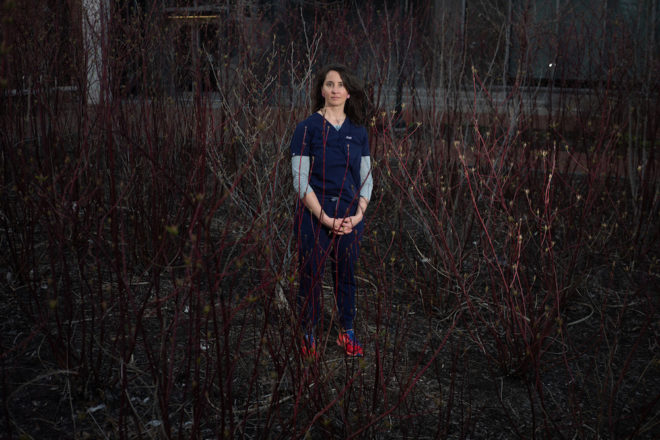 Margaret, a nurse in the Greater Philadelphia area, was photographed on March 26, 2020 right before she attended to her first COVID-19 patient. | Photo: Kyle Cassidy

On March 26, 2020 I photographed Margaret, a Philadelphia-area nurse about to treat her first COVID-19 patient. I did this in an effort to create an oral history of the city’s response to the nascent global pandemic. Exactly 365 days later I photographed her again in the same place after she had spent a year watching people die. We are all different after that terrible year, but Margaret and her colleagues have seen and endured daily experiences they will never be able to erase from their memory. I have spent 12 months listening to their stories.

A year ago, as the virus tore through New York City and Los Angeles, it began to seem inevitable that it would reach us here in Philadelphia. It was far beyond the point where it could be contained and we would have to pass through it. Some of us would come out the other side and some of us would not. I didn’t want this time to pass with no record of the people in Philadelphia who were going out to fight the pandemic while the rest of us sheltered in place at home. In the early days I reached out to doctors and nurses, essential workers, delivery drivers, sanitation workers, and others. I asked if I could photograph them and record their stories for the duration. I wrote down their fears, their triumphs, their hopes, and their defeats. For many of them, the past 12 months were a slow grind of misery. The victories were few and far between and the rest was just watching people die over and over and over and over. And then, after a slightly hopeful summer, another major surge of contagion and the grim reality that they were going to have to do it all again. Their stories are filled with anger, frustration, but also dedication, resilience, and resolve.

Because hospitals were opaque, some people were led to believe that COVID-19 wasn’t as bad as it was. I saw acquaintances on social media posting photos of empty parking lots as “proof” that the pandemic was a hoax. Yet, every day healthcare workers I talked to were dealing with the sickest patients that they’d ever seen, stacked in makeshift ICU’s and highly infectious COVID-19 wards. Almost every other function of healthcare was put on hold.

It was important that these stories from the inside reach the outside world. I listened as nurses and doctors navigated the system themselves looking for COVID-19 tests, for antidepressants, and for therapists to help them deal with the things they’d seen. As the year and pandemic dragged on some of the strength and spirit they’d started with dwindled away. I listened to grocery store workers who lived in perpetual fear of getting sick with no health insurance and shoppers’ careless attitude about crucial safety protocols. I listened to politicians trying to make the best decisions for their constituents, while crises piled on top of crises. As the pandemic roared, the city came to a reckoning over social justice after the murder of George Floyd and then became an unexpected focal point of the presidential election. Each inflection point drew thousands of people into the streets. 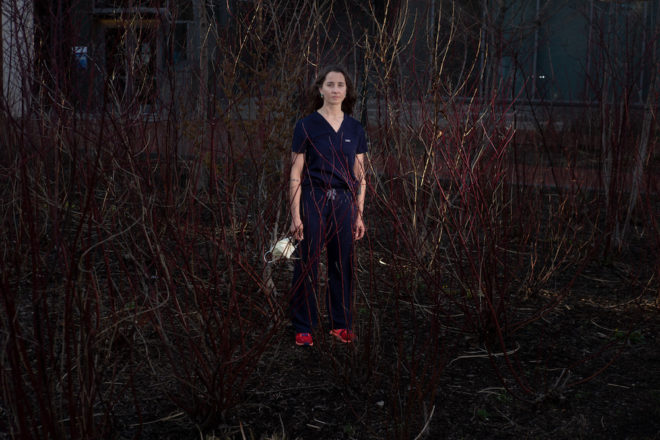 At the end of 2020 the Science History Institute installed a large outdoor exhibition of my photographs at 3rd and Chestnut Streets and created podcasts of additional interviews. “I just feel broken” one of the nurses told them in December.

In the first photograph Margaret is still waiting for her first COVID-19 patient, uncertain of what is to come. In the last photograph she has seen hundreds patients and watched the pandemic take its deadly toll. Her team is now trying to save long-haulers, those people who survived being infected by the virus, but haven’t gotten much better. “Their lungs are like a field that locusts have been through,” says Margaret. “The field is still there, but nothing else.”

Some of these nurses and doctors will never be the same, and I don’t know that there is any way we can adequately compensate them for what we have put them through. But we should try. Despite daily warnings and death toll tallies, many ignored reality by going to birthday parties, large gatherings, creating super-spreader events, while simultaneously refusing to wear masks, ignoring science, and putting their own lives, and the lives of others, at risk.

The pandemic is far from over, but there may be a light at the end of the tunnel. Although many of the essential workers I photographed have not been vaccinated, all of the doctors and nurses have been. Yet, they stand on a denuded field, tending to the broken bits that are left and hoping that life will grow again. The rest is up to us. 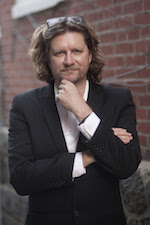 Kyle Cassidy Kyle Cassidy is a Philadelphia photographer. His portraits of healthcare and essential workers can be seen at the Science History Institute at 3rd and Chestnut Streets and at BetweenUsAndCatastrophe.com