The Forgotten Fame of Anna Dickinson 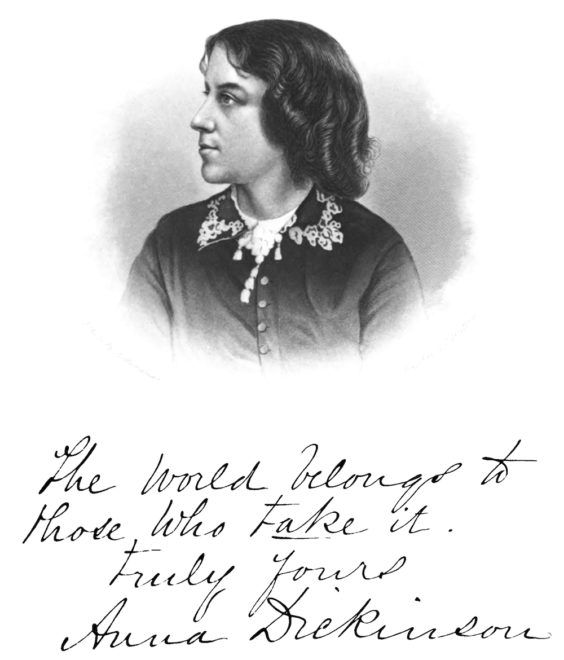 This image of and quote by Anna Dickinson is from the frontispiece of the 1881 book by Susan B. Anthony and Elizabeth Cady Stanton, “History of Woman Suffrage.” | Image: Public Domain

During the latter part of the 19th century, Philadelphia-born Anna Elizabeth Dickinson was one of the most famous women in the United States. Raised in a Quaker family at 1710 Locust Street, Dickinson attended Friends Select School and became an ardent abolitionist. An anti-slavery essay by Dickinson was published in William Lloyd Garrison’s Liberator in 1856 when she was only 13-years-old. In 1860, she began speaking out against slavery and in support of women’s rights. Garrison and Lucretia Mott helped arrange major speaking engagements throughout the mid-Atlantic and New England states. Dickinson’s charismatic delivery and provocative messages attracted thousands of ticket-paying spectators.

In the Civil War years, Dickinson’s speeches aroused enthusiasm for the Union cause. She visited hospitals and camps to lift the spirits of Union soldiers. Sharing a stage with her friend Frederick Douglass, Dickinson gave a speech encouraging Black men to enlist and later visited USCT troops at Camp William Penn. As her fame increased, Dickinson became known as the “Girl Orator” and the “American Joan of Arc.”

As a national celebrity, office seekers sought out Dickinson’s endorsement. In an era in which women were not expected to have a political voice, she stumped for Radical Republican politicians before the 1863 Senate elections. 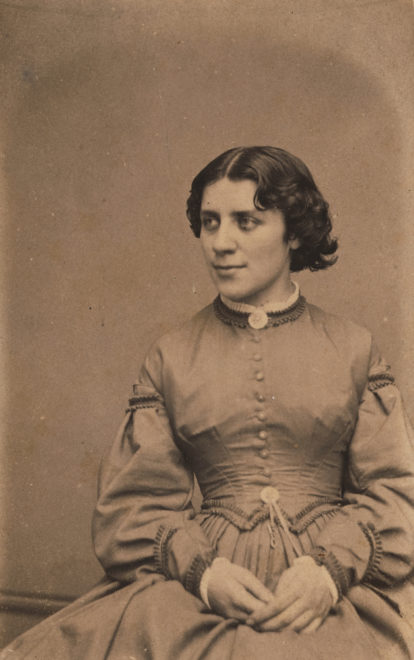 In 1864, Dickinson was invited to speak at the U.S. Capitol by nearly 100 Republican legislators. President Lincoln, Mary Todd Lincoln, Union military leaders and cabinet members were in attendance for this first-ever Congressional address by a woman. The 21-year-old Dickinson received a standing ovation. Although she had been critical of President Abraham Lincoln in her speech, she was later invited to the White House to meet with him, further evidence of her prominence.

Following the Civil War, Dickinson became one of the most highly paid and most active speakers on the popular Lyceum circuit where she was known as the “Queen of the Lyceum.” Reconstruction, economic inequality, and African American and women’s rights were among her frequent topics. Her popularity was so great that she earned the equivalent of $300,000 a year as a professional orator during a time when women rarely spoke in public.

A historical speech she developed about Joan of Arc was also in high demand. Mark Twain described the captivating speaker as follows: “She talks fast, uses no notes what ever, never hesitates for a word, always gets the right word in the right place, and has the most perfect confidence in herself. Indeed, her sentences are remarkably smoothly-woven and felicitous. Her vim, her energy, her determined look, her tremendous earnestness, would compel the respect and the attention of an audience, even if she spoke in Chinese….” 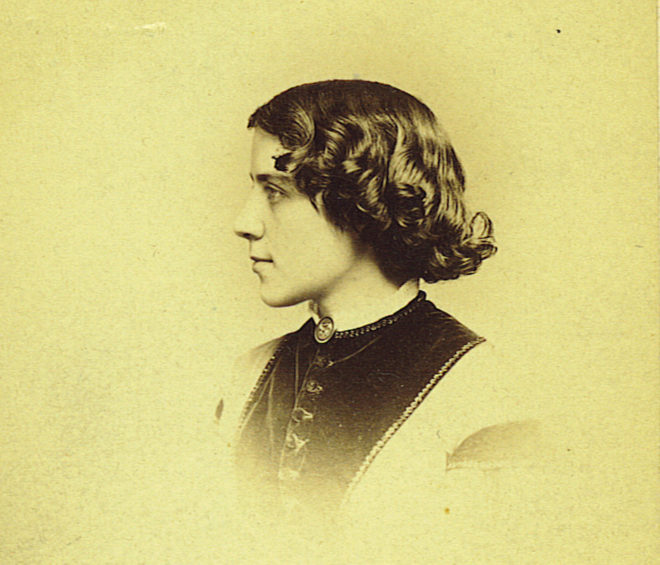 Detail of a carte de visite of Anna Dickinson taken by photographer F. Gutekunst of Philadelphia during the Civil War. | Image courtesy of Matt Gallman

During the summer of 1866, Dickinson and Frederick Douglass came to Philadelphia for a gathering of Republicans where they spoke out for voting rights for Black men, three years before passage of the 15th Amendment.

When lecture tours became less lucrative following the Panic of 1873, Dickinson wrote several books including What Answer?, a novel about interracial marriage. She published works of nonfiction on subjects including education, prison reform, and workers’ rights. Dickinson also authored and acted in several original plays about historical figures such as Anne Boleyn and Mary Tudor.

Eager to subvert gender norms, she played Hamlet on Broadway and climbed mountains in Colorado. Dickinson made headlines as the second white woman to summit Pike’s Peak.

Throughout the 1860s and 1870s Dickinson was one of the nation’s best-known celebrities. People collected cartes de visite of her image and paid handsomely for her autograph. Dickinson sat for the nation’s leading photographers including Matthew Brady. Newspapers followed her career closely and also speculated about her romantic entanglements. Her licensed likeness was used in a wide variety of advertisements. 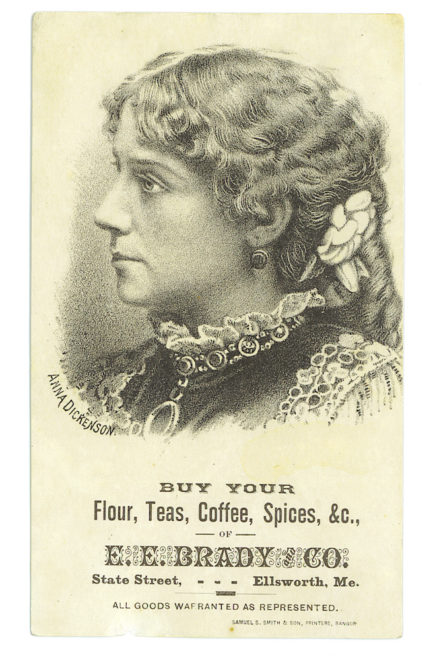 Advertising card using an engraving of Anna Dickinson, but misspelling her name from the late 1870s or early 1880s. | Image courtesy of Matt Gallman

How did a woman who was once so famous end up living the final four decades of her life in poverty and obscurity? Why is a small marker in Goshen, New York the only public memorial to this once nationally celebrated woman? A combination of factors led to her downfall, and it is difficult to untangle the causes and results of her demise.

Some of it was her resistance to becoming part of any larger movements. In spite of being asked repeatedly to take on a leadership position in the official women’s suffrage organizations, Dickinson consistently demurred. She preferred to represent her own views rather than those of a collective.

Although she was pursued by many eligible, prominent male suitors, Dickinson never married. Her correspondence indicates that she had love affairs with women, including Sallie Ackley, a married woman with whom she lived, along with Ackley’s husband, for over 40 years.

Dickinson was litigious and combative. Lawsuits, followed salaciously by the press, dragged on for decades and cost her both money and friendships. She drank heavily and fell ill frequently. At one point her sister had her committed to the Danville State Hospital for the Insane. In a subsequent lawsuit against her sister, Dickinson served as her own lawyer. 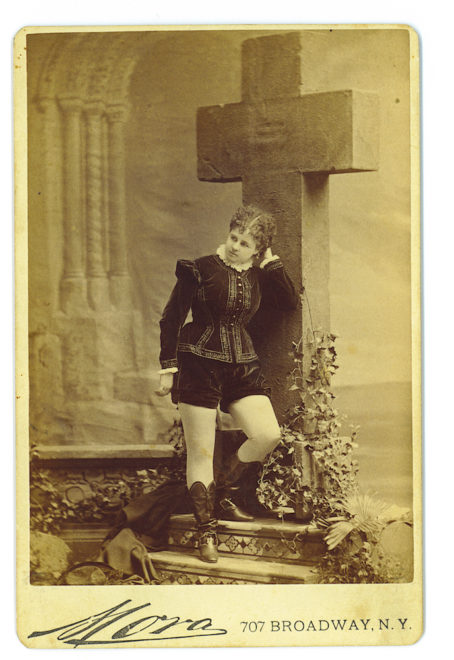 Cabinet card from the early 1880s of Anna Dickinson as Hamlet. Taken by New York photographer Mora in the early 1880s. | Image courtesy of Matt Gallman

She was also likely an early victim of the American fame machine which to this day loves to build up the female ingenue only to watch with schadenfreude as the inevitable fall from grace occurs (see the recently-released documentary Framing Britney Spears for contemporary context). Dismissiveness and resentment directed toward strong women who speak their minds is another challenge faced by Dickinson that persists to the current day (“I’m speaking, Mr. Vice President,” to quote Kamala Harris speaking to Mike Pence in a debate last fall).

A window into Dickinson’s rise and fall is provided through a collection of letters archived at the Historical Library at Swarthmore College. Philadelphia area educator Martha Schofield writes to an old friend in 1860 about her first experience seeing Dickinson speak. “Last week there was a lecture here by Annie E. Dickinson, a young girl not yet 18. Her subject was ‘Woman and her Position,’ it was very powerful eloquent and instructive, most excellent for one so young in years, she has lately commenced, and it was a grand sight to see one so youthful, one whose eyes shone from the brightness of the soul within, speaking so well and pleading so thrillingly for the cause of humanity—she is very modest, and every feature is stamped with purity, if she lives her mission will be a great one, and her name will be numbered with the noblest of earth’s women.”

In 1863, Dickinson’s mentor, Lucretia Mott, celebrates her growing acclaim in this passage. “How wonderful A.E. Dickinson’s popularity—she has so much laid out for her the Fall in this state.” A few years later, Mott writes of her protege, “Susan B. Anth. said Anna E. Dickinson spoke grandly in Boston + very well at Longwood too.”

Martha Schoefield’s uncle describes his fan boy feelings in an 1866 missive. “How did thee know that I liked Anna E. Dickinson so well? Indeed I feel proud to acknowledge that I do like her very much + have every speech she has ever made in my Scrap Book + which I treasure very mightily—thee mentions that thee knew her at 17 when she first spoke in public.” 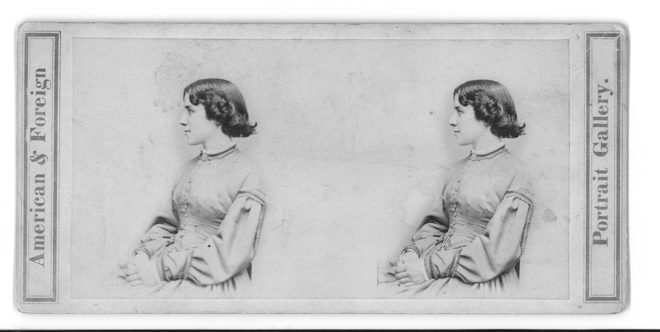 In 1869, however, Schoefield receives a letter from a friend’s husband denigrating both the message and the messenger. “Will you tell me what you think of the…criticism of Anna Dickinson’s lecture? The criticism I like. The abstract I saw of her speech I did not like. We have given the negro a fair field and his full rights. Has he any right or cause with propriety to ask more for him?… I think her pretty face has done more for her reputation than the quality of the matter she has doled out to the lecture-going public.”

By 1873, even Mott displays waning enthusiasm. “You didn’t miss so very much when Anna Dickinson lectured—she seems to be rather losing her radical ground of late.”

When Anna Dickinson passed away at the age of 90 in 1932 she was impoverished and unknown. The first woman to address both houses of Congress, should not, in my opinion, be so easily forgotten. In December 2020 I sent an application to the Pennsylvania Historical and Museum Commission for a marker at her original home at 1710 Locust Street. My Women’s History Month got off to a fantastic start when I received notification that my submission was accepted.

I plan to wait until the pandemic has ebbed to hold the dedication ceremony. If you are interested in helping me to plan the event, or if you want to be apprised of when it will take place, please email me at amyc [at] historymakingproductions.com.