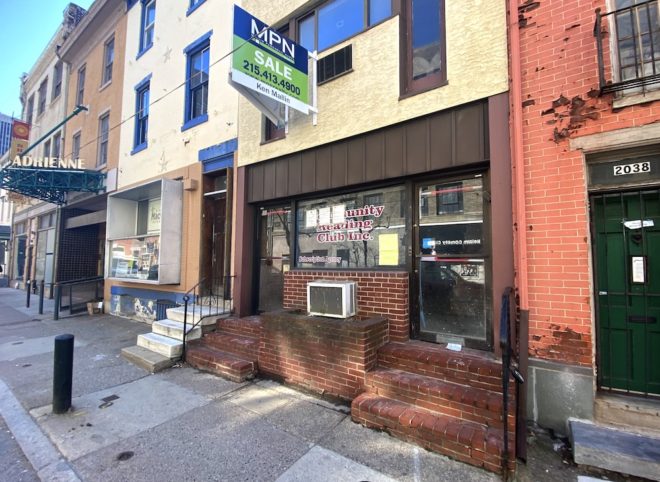 The night of February 11, 1959 started off just like any other at the Humoresque Coffeeshop. Patrons enjoyed cappuccinos, espressos, and pastries while engaging in small talk and games of chess. Young Philadelphians arrived at the coffee house on Sansom Street as strangers, friends, and couples.

There was no reason to expect the night would end any different than usual, with coffee house goers returning back to their apartments or parents’ houses throughout the Philadelphia area before the 10:30PM curfew for minors under 16. That was until two men pulled up to the establishment at 9PM.

Their names were Thomas Traherne and Kenneth Powell, plainclothes patrolmen in Frank Rizzo’s Center City police squad. The two stationed themselves outside the coffeeshop for 15 minutes, listening to classical music, debates over art and literature, and declarations of winning games of chess that came from the establishment. Then they called for backup and police vans.

When the other officers arrived, Traherne and Powell entered Humoresque and saw 34 patrons, both male and female, in a long and narrow room hazed with smoke from tobacco pipes and cigarettes. The two officers told the patrons they were being arrested for breach of the peace, but declined to give further information.

It would later be revealed, however, that the coffeeshop was raided because interracial couples and gay men frequented Humoresque.

None of the officers at the scene took down names of patrons while they were at the coffeeshop before taking them to the Center City police station. Those with family connections with the Philadelphia Police Department were let go. Minors were given a warning by the police and were picked up by their parents at the police station. Everyone else was jailed overnight and weren’t given the opportunity to call a family member, friend, or lawyer.

In the morning, Mel Heifetz, owner of Humoresque, was charged as the proprietor of a disorderly house and held on $300 bail. The other adults were each fined $12.50. 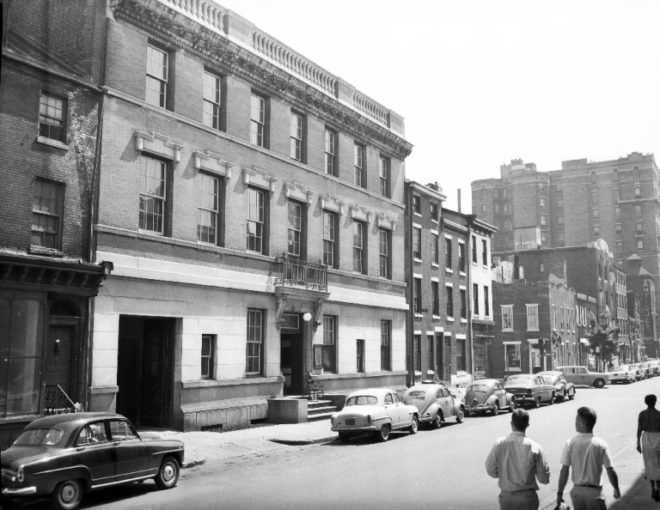 The old Center City police station at 12th and Pine in the 1950s. | Image courtesy of PhillyHistory.org

Local media was originally sympathetic to Heifetz and everyone arrested. The Philadelphia Evening Bulletin mocked the police for targeting “kids who ought to be drinking milk.” The Philadelphia Inquirer published several letters to the editor critiquing how the Philadelphia police were wasting their time and resources on petty matters.

The Humoresque Coffeeshop was one of many establishments on a mixed industrial street lined with businesses. By night, most of the stores were closed, and the only people around were those who lived in the apartments above. Police claimed to have received complaints from neighbors about noise coming from the coffee house, although Heifetz maintains his business was no louder than it was any other night.

“Never once did we ever have anyone come by and say there’s a complaint of noise,” Heifetz recently explained. “The people that were arrested were 16 to 18 years old. They weren’t doing drugs. There were no gangs, no weapons. It was just young people out on a date. I never expected that we would be accused of anything.”

Not everyone who visited Humoresque was a beatnik, but the patrons were described by police and the media as men with beards who wore corduroy trousers or very tights pants with leather jackets and women who wore full length tights and turtleneck sweaters.

Over the following week, Humoresque and the other half dozen coffee houses in Philadelphia were raided twice more. Each time, the police accounts and headlines included accusations of more serious crimes, from drug dealing and usage to insinuations that coffeeshop goers were gay, without providing reasonable evidence that any crimes were committed.

During the night of one of the raids, Rizzo stood in front of a gathering crowd, pointed to Heifetz, and shouted, “Are you going to allow that creep to operate that den of iniquity?” Rizzo then told him, “If you defy me, I’ll hang you from the chandelier.” 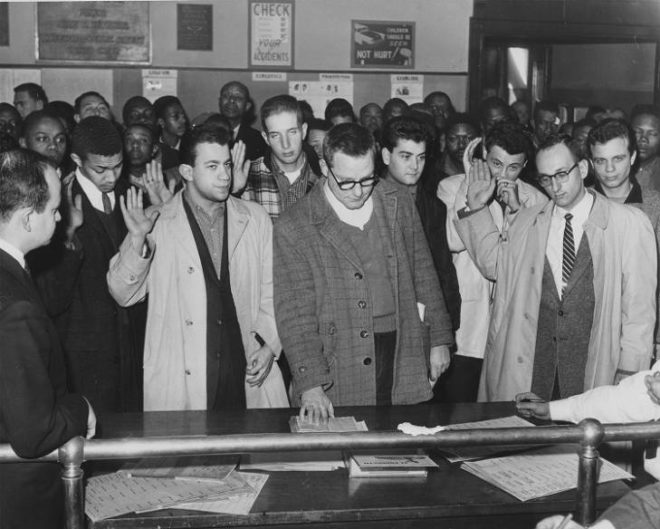 Melvin Heifetz, owner of Humoresque Coffeeshop, is seen here at right with glasses, overcoat, and suit along with other unidentified youths at a hearing on February 12, 1959. | Image courtesy of Temple University Libraries, Special Collections Research Center

Even before the raids, Heifetz knew Rizzo was keeping a close eye on his coffeeshop. In January, Heifetz met with Rizzo after one of his police officers approached him saying that the police chief wanted to speak with him. Rizzo told Heifetz that he heard he wasn’t “taking enough care of the police.” Twice a year Heifetz would hand out a dozen small bottles of whiskey to officers who would stop by his coffeeshop.

After his meeting with Rizzo, Heifetz went to the liquor store, bought a dozen bottles of whiskey that were double the size he normally handed out and gave the bottles to every police officer who stopped by Humoresque. The week before police raided the coffee house, Rizzo called Heifetz back into his office and told him that the bottles weren’t enough. If Heifetz wanted to keep the police away from Humoresque, he was told he would have to pay them off with money he didn’t have.

The Philadelphia Police Department’s handling of the case led to Spencer Coxe, then executive director of the ACLU’s Greater Philadelphia branch, to reach out to Heifetz. Coxe told him that he would like to help him and those involved find representation.

On February 19, with assistance from the ACLU of Pennsylvania, Heifetz filed suit in the U.S. District Court for $25,000, charging Rizzo and the City of Philadelphia as his employer with “damaging” his business. The lawsuit hoped to bar Philadelphia police from entering the coffeeshop again without a warrant. Harvey Walters, an 18-year-old customer at Humoresque, joined the suit and asked $15,000 for damage to his reputation.

Two days after Coxe contacted Heifetz, The Philadelphia Tribune published an article delving into claims made by those arrested and the parents of minors at the coffeeshop that police concerns over miscegenation, especially between Black boys and white girls, was why the coffee house was raided.

Police continued to double down on accusations that the coffeeshops were frequented by gay people and drug addicts who were noisy, dismissing the accusations published in the Tribune. According to Marc Stein, author of City of Sisterly and Brotherly Loves: Lesbian and Gay Philadelphia, 1945 – 1972, this pattern of Philadelphia police inventing new excuses to justify what they had done as they came under criticism and litigation became a “standard feature” in media coverage of Frank Rizzo.

“It didn’t play so well in public at that moment in time to express that they didn’t like the coffee houses because of interracial couples,” said Stein. “It was much more acceptable to attack gay people. And then I think they were a little surprised that there were civil libertarians and others were coming to the defense of gay people.”

With the help of newswires, the story drew national media attention from outlets like The New York Times, LIFE Magazine and Newsweek. But coffeeshops weren’t ubiquitous in Philadelphia at the time and, according to Heifetz, the jurors at his trial weren’t able to discern fact from fiction when police officers across the city testified about complaints and crimes at the coffee house, despite many having never visited Humoresque.

Heifetz and Walters would lose their case in court. Although Heifetz wouldn’t serve jail time, he was charged with conducting a disorderly house. His lawyers at the ACLU suggested he should appeal his case to an upper court, but Heifetz didn’t have the money to do so. To this day, the charge is still on his record.

Humoresque Coffeeshop closed shortly after the trial. Heifetz went on to make a fortune in real estate, donating his profits to various causes in the Philadelphia area, including many that support the LGBTQ community, in recent years. His philanthropy, which awarded him the Philadelphia Award in 2018, exceeds $30 million. “I pledged to myself when I was 24 that, if I were successful, I would do everything I can to help the community,” said Heifetz.