The difficult task of an exhibit devoted to North Philadelphia is defining its contours. How do we determine the coordinates of North Philadelphia? Understandably for a gallery venue at Temple University, the curators of History of a Neighborhood: Mapping North Philadelphia, 1837–1990 narrow the focus to a fairly circumspect boundary, primarily the neighborhoods along Broad Street and within the orbit of Temple’s campus. If you look up historic maps of the area prior to 1880 you are reminded that long before North Broad Street developed as a bustling residential and industrial corridor rail lines crisscrossed it to connect older economic hubs. For businesses and workshops in Falls Village, Germantown, Frankford, or downtown, this area was simply a flat landscape, a convenient grade to traverse by rail and connect the destinations that mattered. For a city so physically identified with its founding grid design, rail tracks in North Philadelphia repeatedly disrupt that grid, as coal carrying rail lines early on set the course of development. Furthermore, the dense rail yards around Wayne Junction and at North Pennsylvania Railroad’s American Street operation permanently isolated smaller, intact, and cohesive residential blocks. 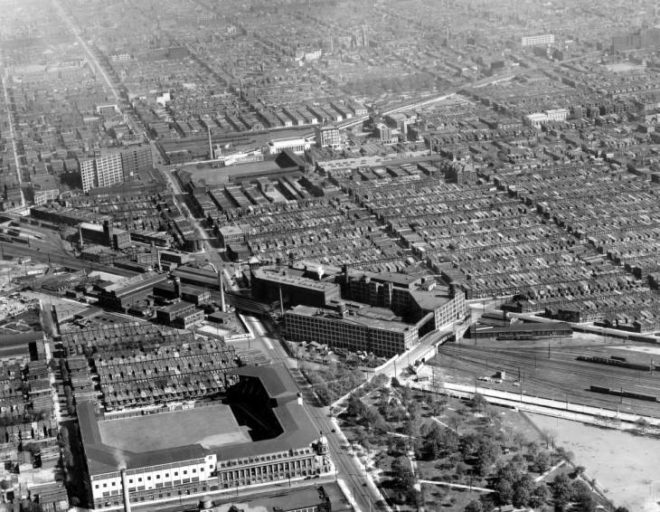 Rail and transit–perhaps no more eloquently then in images of Horace Trumbauer and Julian Abele’s North Broad Street Station–form a central visual thread of the exhibition, as it eventually led to the rise of factories, row house blocks for workers, and even central access points to prominent sporting venues like the Baker Bowl. Viewing the archival photos, I immediately thought of the absence of a beloved park or destination, any green space for the residents. Did North Philadelphia so physically embody the Protestant work ethic of output and speed that public parks in these environs were to always remain incidental if ever even imagined? Did our normally wise Quaker benefactors, the visionaries that help create Fairmount Park, scientific societies, and museums only see the economic return of such a vast area? Even the local amusement and entertainment spots such as Shibe Park are of course business enterprises. Perhaps a sly bit of humor is at play in a pair of World Series tickets from 1964, preprinted in anticipation of the Phillies playing in the series at Connie Mack stadium. Of course, it never occurred in that bitter, infamous Phold-ending season.

Appropriate and necessary, but with a light touch, the exhibition addresses the continuous tension around Temple’s expansions. The small footprint for much of the university’s first decades is dramatically upended by its growth in the late 1960s and 1970s, demonstrated most viscerally in the photograph of cleared lots from the Spring 1970 Temple University Alumni Review. Here children pose in the midst of a former block of row houses, cleared across from Paley Library–a bleak construction site that seems to stretch forever. Perhaps fitting for an exhibition that has a scrapbook vibe that opens with a facsimile for the act of incorporation of Monument Cemetery. Also resonating is the too frequent scenario that the once park-like setting of the cemetery would sooner or later present a significant barrier to Temple’s growth across Broad Street. 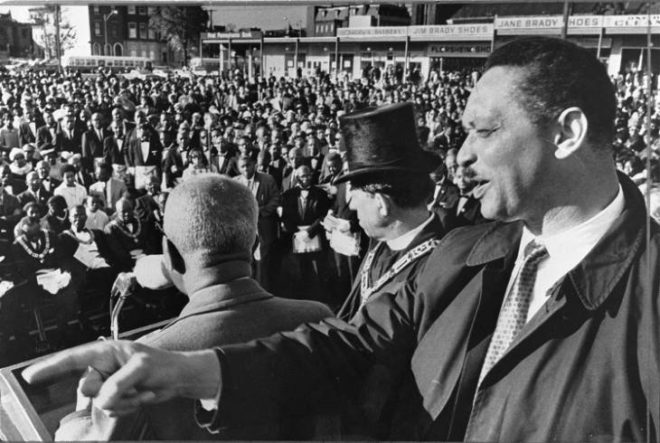 A searing portion of the exhibit centers on the 1964 Columbia Avenue Riots. Graphic images of police assaults and assembled officers waiting for instructions are a chilling parallel to recent events. The newspaper images of looted businesses undoubtedly reveal the years of pent-up rage that simmered for generations. Prominent leaders such as Cecil B. Moore tried to peacefully diffuse the situation, but the destruction continued for days. The factory closings and racist lending practices that wrote off wide swaths of North Philadelphia could only have instilled a distrust and cancerous apathy toward the white civic leadership.

Alternatively, promise and bold dreams are captured in the activism of the Church of the Advocate, the national stature of Freedom Theatre, and the determined community forces aligned to create Progress Plaza, the first such entity in the United States. Notwithstanding the university’s general lack of concern with preservation issues, its campus gem, Grace Baptist Church’s sanctuary, was retrofitting for a performing arts center, an arguably just and sensitive adaptive reuse. As noted in the exhibit description, it took roughly 30 years to see it come to fruition. 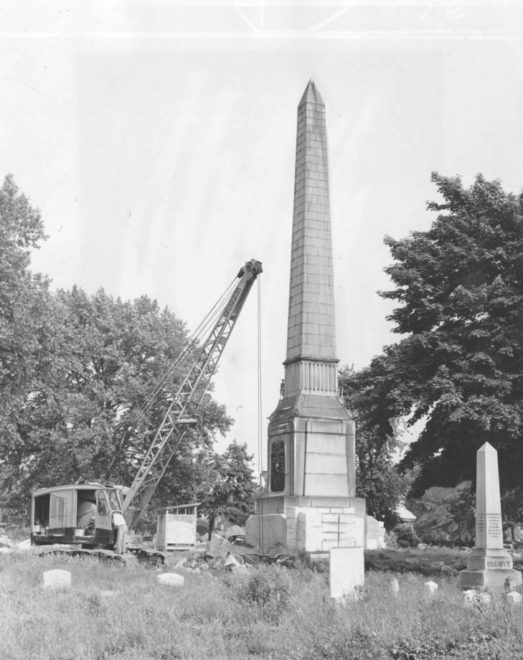 All the materials on view are from Charles Library’s Special Collections Research Center, a worthwhile reminder of Temple’s longstanding commitment to a broad array of community archives and ephemera. Note the cheery ticket for a “Ladies of Yorktown” inaugural luncheon.

Having recently ridden along the very tracks that bisect North Philadelphia, I pondered the impression we take today from its elevated and ground level views. Perhaps one visual snapshot is the almost uniform low-rise rooflines along this flat plane in contrast to the distant towers of Center City. Another would be the impressive scale of Deliverance Evangelistic Church. Much has changed or receded in the ordinary daily streetscape here, but a magnet church is a healthy reminder of what unifies neighborhood life when other institutions have come and gone.

History of a Neighborhood: Mapping North Philadelphia, 1837–1990 is on view at Temple University’s Special Collections Research Center in Charles Library until Monday, May 31, 2021. Contact library staff for hours of operation and public access HERE.