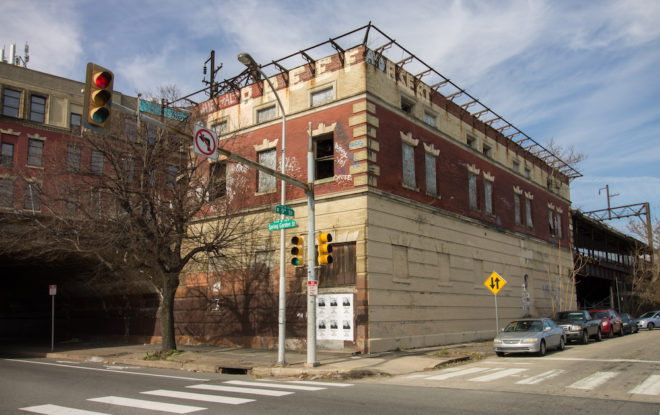 In February, 2020, I wrote about the abandoned Spring Garden Street Station at 9th Street. The article’s theme revolved around station’s potential, once restored, as a center of pedestrian and tourist attraction as the Rail Park progressed northward. On January 29, 2021, this station was the subject of an article by Inga Saffron, architecture critic of the Philadelphia Inquirer, concerning the efforts of a blight-fighting nonprofit, Scioli Turco, to force the cleanup of this derelict property under Pennsylvania’s Abandoned and Blighted Property Conservatorship Act (Act 135) either by its owner Reading International or by a receiver, Arts + Crafts Holdings, the real estate firm that has been buying and rehabilitating other nearby buildings for nearly a decade.

Readers of my February 2020 article responded with their thoughts on potential reuses for Spring Garden Street Station, but also to the larger theme of restoring and improving public transit. Ravindra Maleshri commented, “Starting to revitalize the railroad will bring less pollution, lesser vehicle traffic, and above all make proud of Philadelphia’s heritage which again will be beneficial for tourism development.”

In the spirit of Maleshri’s comment, this article will attempt to explore opportunities to revitalize Philadelphia’s railroad network, starting with SEPTA’s abandoned Tioga Station on the Reading Viaduct. 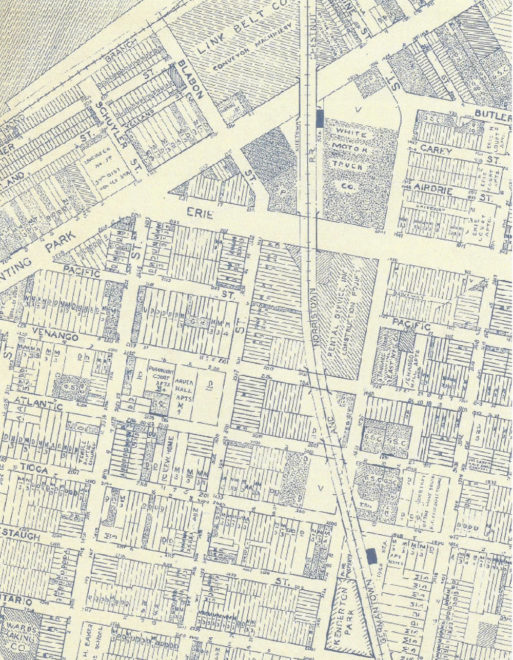 The Reading Viaduct follows the route of Philadelphia’s first operating railroad, the Philadelphia, Germantown, and Norristown, northward to Wayne Junction. From Wayne Junction’s passenger and freight car rail yards lines radiate out like fingers from a hand’s palm to Germantown and Chestnut Hill, Lansdale and Doylestown, Jenkintown and West Trenton, Port Richmond Marine Terminal, and other destinations. The Viaduct is the arm connecting all of them to Center City , whether to Reading Terminal when it was the heart of the Reading System or to the Center City Commuter Connection Tunnel. From the tunnel a rider on the former Reading lines travels seamlessly onto commuter lines of the former Pennsylvania Railroad to destinations as diverse as the Main Line, Wilmington, Media, and the rapidly growing job center of West Philadelphia. The Viaduct is a vital link between employees’ homes and their jobs. Unfortunately its trains running past North Philadelphia offer little service to communities who could really benefit from it, but once upon a time they most certainly did.

The Reading Railroad must have considered 20th and Tioga Streets as a very important location, as it constructed four stations there beginning in 1854 and lastly in 1910 as the line was elevated. The second station south of Wayne Junction, Tioga Station was last reconstructed in 1910 in salmon-colored brick and cream terra cotta to resemble Reading Terminal. The others included Nicetown on Hunting Park Avenue, North Broad at Huntington Street, Columbia (now Temple University Station), and Girard Avenue and Spring Garden Street on 9th Street. The Girard Avenue Station, constructed on the Viaduct above the street bed, was abandoned by the Reading in the 1950s. The company continued serving the other stations until its bankruptcy and reorganization into Consolidated Rail Corporation, or Conrail, in 1976. Conrail also inherited passenger stations of the Penn Central in Philadelphia, but conveyed its commuter rail operations here to SEPTA in 1986.  SEPTA, operating a network of bus and subway lines throughout North Philadelphia, ceased operating Tioga and Nicetown Stations and demolished Tioga Station in 1987 on the reasonable assumption that its City Division fleet would adequately service Tioga Station’s dwindling commuter traffic. 13 railroad stations have been closed in Philadelphia’s neighborhoods. 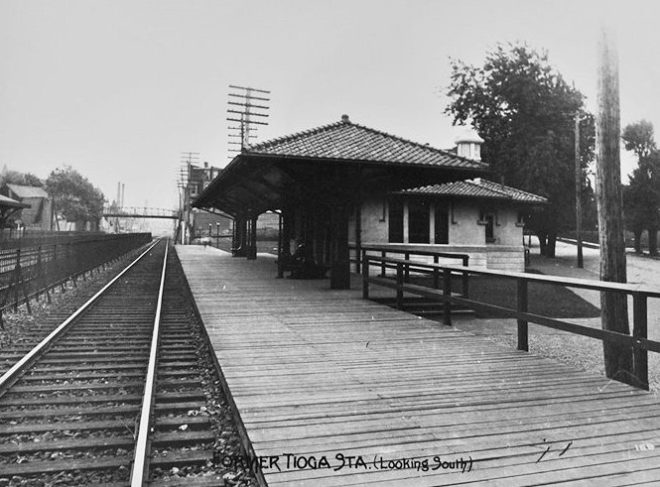 The neighborhood, originally called Kenderton after an early property owner, was renamed Tioga at the time that the Reading’s first station was built there. The neighborhood thrived on its proximity to the rapid industrial development of lands north of it in Nicetown, Hunting Park, and in vicinity of Wayne Junction as Philadelphia earned its reputation as the “Workshop of the World.” Its outbound station was quite substantial, indicating that daily ridership northward must have been heavy. Workers commuted to jobs at factories like Midvale Steel, established in 1867 by William Butcher, an immigrant from Sheffield, England which was the center of the British steel industry. Butcher’s intent was to produce high quality steel for the American railroad industry. His mill attracted steel-dependent businesses such as Link Belt, a farm machinery company now known as FMC, which was located next to the Reading’s Nicetown Station. Midvale and Link Belt provided the original contributions that established the neighborhood library. Midvale produced steel armor plating for Naval cruisers and battleships being manufactured by Cramp Shipyard in Port Richmond. Midvale’s presence attracted such firms as Leeds and Northrup, manufacturers of electrical instruments and Hale and Kilburn, makers of railroad equipment. One of Hale’s employees, Edward G. Budd, would later establish several factory buildings in Nicetown and Hunting Park producing rail cars, auto frames, and bodies. The Tioga neighborhood would reach its pinnacle of prosperity in the 1940s.

Philadelphia’s prowess as an industrial center had begun to ebb in the early 20th century when Baldwin Locomotive Company relocated its factory to Delaware County from Broad and Spring Garden Streets. After World War II the trickle of move-outs and plant closures grew stronger, raising alarm in City Hall and the Chamber of Commerce, which created the Greater Philadelphia Movement to try to stem the losses. Alas, it was not to be. Philadelphia found itself swept up in the undertow of a postwar de-industrialization wave engulfing the Northeast and Midwest.  This had dire impacts on the residents of Tioga as well as the city in general. The Reading Railroad went bankrupt by 1971. Midvale Steel closed in 1976. By the time Tioga Station was demolished in 1987, there appeared to be little justification to retain it. Along with many other Philadelphia neighborhoods, Tioga fell victim to urban decay and disinvestment. 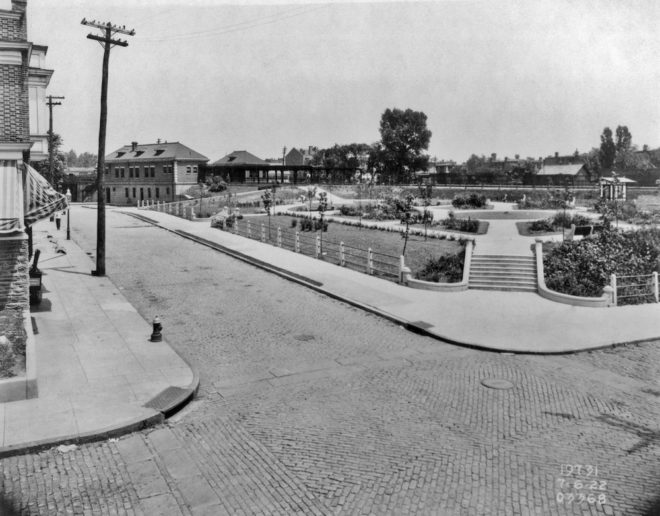 Tioga Station Garden in 1922. The Reading Railroad donated the garden to the City of Philadelphia. | Image courtesy of the Reading Company Technical and Historical Society 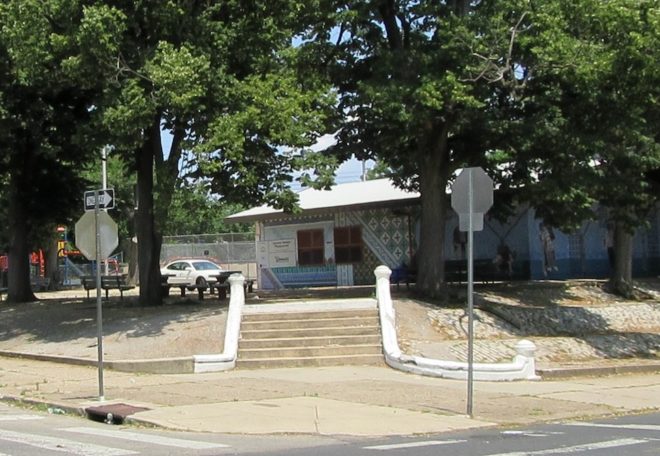 No economy stands still for long. Changes shifted the locus of Philadelphia’s economic development from its traditional industrial base to tourism, education, and medicine. Emblematic of this change was the construction of the Center City Commuter Connection Tunnel, which made Reading Terminal obsolete as a railroad station, followed by creation of the Pennsylvania Convention Center using the terminal’s train shed and office building fronting Market Street. With the function of the Convention Hall in West Philadelphia having become redundant, the lands that it occupied were soon filled with high rise medical and educational facilities along the canyon of what is still quaintly named Civic Center Boulevard. SEPTA responded to the impact of this land use change on its ridership by creating University City Station, since renamed Penn Medicine Station. University City has been joined by a wave of development adjacent to Amtrak’s 30th Street Station, beginning with Cira Centre and FMC’s corporate headquarters atop Schuylkill Yards. But what does this do for Tioga?

The Philadelphia City Planning Commission has embarked on a series of strategies for neighborhood revitalization and Tioga came under their focus in 2010. Among its major recommendations were restoring train stations. Its report cited a University of Pennsylvania design studio that proposed “CityRail,” where the former stations would be restored. Within city limits trains would run ever 15 minutes, creating a new rapid transit system serving Philadelphia neighborhoods. Trains headed for the suburbs (“MetroRail”) would operate as express service within the city.  These recommendations were never implemented.

On January 9, 2020, the Philadelphia Inquirer published the article “Point Breeze and Tioga-Nicetown: Why one Philadelphia neighborhood has surged while another languishes.” The article found that one of the reasons for Tioga’s continuing poverty was its lack of transportation access, especially for the disabled, to centers of job creation such as Center City and Penn Medicine. 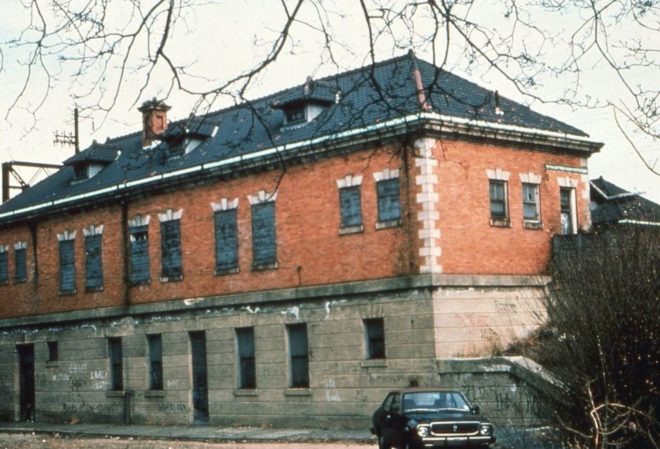 Tioga Station at 20th and Tioga Streets in 1987 prior to demolition. Service was terminated in January 1990. | Photo: Ed Duffy

SEPTA has a 3-mile extension of their Media/Elwyn line to Wawa underway, budgeted for $177,900,000. What is intriguing about the line is that its passenger service extends southward from Temple University Station, but its trains begin and end their route two miles north in Wayne Junction Yard, as there is no railcar storage capacity at Temple. The Media/Elwyn trains from Wayne Junction travel empty past Tioga and North Broad Station before making their first passenger stop at Temple. If these Media/Elwyn trains stopped at Tioga, the residents would have a “one seat ride” to Temple University, Center City, Schuylkill Yards, and Penn Medicine–Media/Elwyn line is not the only SEPTA line that connects all of these stations. SEPTA’s Airport Line also offers the possibility of service between Tioga and Penn Medicine Stations. The possible employment opportunities for Tioga residents are really too good to pass up.

The lands necessary for recreating a station at 20th and Tioga Streets remain in SEPTA’s ownership. Initially there would be no need to create a station grander than a simple bus shelter on either side of the track. In February 2020, before the full impact of the pandemic would be felt, SEPTA anticipated having a consultant on board to begin advancing an overall network analysis and design along with a robust public engagement plan. It is too early in the process to anticipate what changes may be proposed, but SEPTA will eventually involve public input to ensure that there are opportunities for community feedback. As a result, we may see enhanced service come to Tioga if there is advocacy for it as the process moves forward. It certainly is worth the effort.