An Architectural Aria in Rittenhouse Square Dazzles from Within 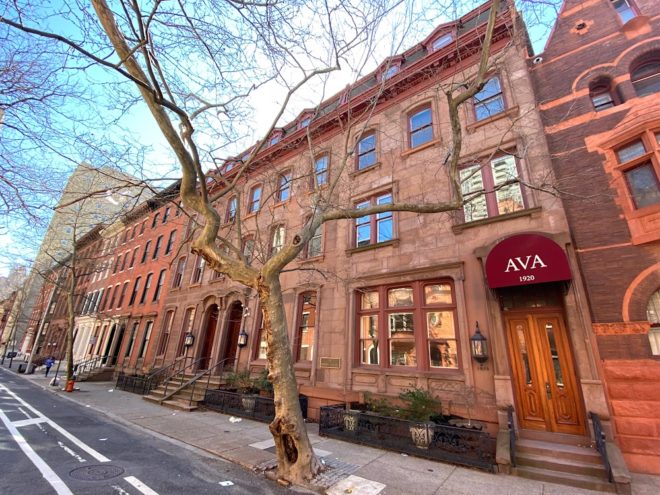 It is difficult to imagine, but in late 1930s the elegant townhouses of Rittenhouse Square, designed by the leading architects of the day, had lost their value. In part due to the Great Depression, but perhaps in more considerable measure, due to the exodus of high society to the suburbs and an influx of the middle class. This explains how the Frank Furness-designed treasure at 1920 Spruce Street was donated to the Academy of Vocal Arts (AVA).

The French Second Empire-style townhouse, a historically certified building on the Philadelphia Register of Historic Places, came with an architectural pedigree. The entire 1900 block of Spruce Street was originally built in 1868 and sold within the year by developer Ebenezer Burgess Warren, director of the Pennsylvania Academy of the Fine Arts and a vice president of Hahnemann College. The block is part of the Rittenhouse-Fitler Historic District. These townhouses marked an architectural departure from Philadelphia’s red brick row houses with light stone trim to the fashionable brownstones of New York City. The names of the first owners came straight out of Philadelphia’s Blue Book. 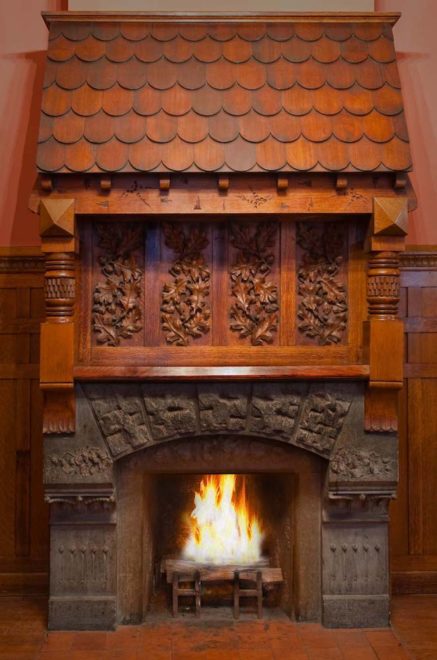 This incredible fireplace has Frank Furness’ name written all over it. | Photo: John Chew

To this day, visitors to AVA are awed by the elaborately carved floral mahogany woodwork, leaded glass panels, and wainscoting. While there is no documentation that specifically references Furness’ individual contributions, the architect’s embrace of Japanese design is evident in the wood carvings.

When Furness and Hewitt parted ways, G.W. Hewitt teamed up with his brother W. D. Hewitt. They were hired in 1902 by the subsequent owner of 1920 Spruce Street, Horace Brock. Their changes included classical revival detailing of the receiving room, the decorative plaster ceiling of the living room, a Delft tile fire place on the third floor, and the addition of the music room that today serves as AVA’s theater.

Audiences will be forgiven for taking their eyes off of the performers to stare in wonderment at the theater’s bas reliefs on themes from A Midsummer Night’s Dream, an imposing mosaic inlaid fireplace, carved wooden beams, and seven oil paintings by Ellen Day Hale and Gabrielle de Veaux Clements, students of William Morris Hunt at the Pennsylvania Academy of the Fine Arts. 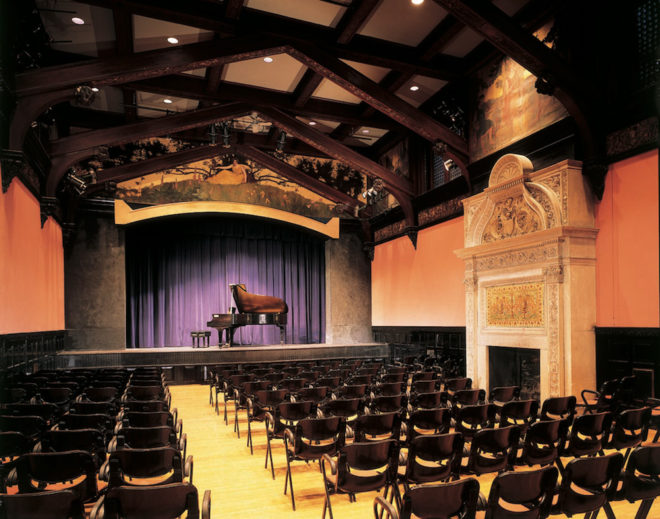 The former music room of 1920 Spruce Street was converted into a theater. | Photo: John Chew

Such was the grandeur of 1920 Spruce Street when it was donated in 1938, five years after the Great Depression, to AVA, then known as The School for Vocal Scholarships. Originally founded by Helen Corning Warden and a small group of supporters in 1934, the school had previously rented rooms at the Art Alliance. From the start, AVA’s mission was, and still is, to provide tuition-free, intensive opera training equal to that of acclaimed European vocal academies. This has enabled talented young Americans vocalists unprecedented opportunities for over 87 years, during which time economic upheavals and the recent global pandemic have not interrupted their training.

Between 1982 and 1983 Otto Sperr Associates restored the theater to its original dimensions, providing room for a 30-piece orchestra. In 1996 AVA hired architects Leung Hemmler and Camayd to suggest further changes. They concluded, “Because of the remarkable character of the Furness interior, it is recommended that the principal spaces of the first floor be restored toward the Furness era.” Thanks to a generous grant from the William Penn Foundation restorations were made in the first floor entrance hallway, the main offices, and the Furness Lounge.

In 2000 AVA expanded, purchasing the adjacent townhouse at 1918 Spruce Street as well as a carriage house behind the property. In 2008, AVA bought 1916 Spruce Street which includes an interior was designed by architect William Woodburn Potter in 1933. Deeds held by the Philadelphia Archives state that both of these properties were developed by E. Burgess Warren and first sold in 1869. 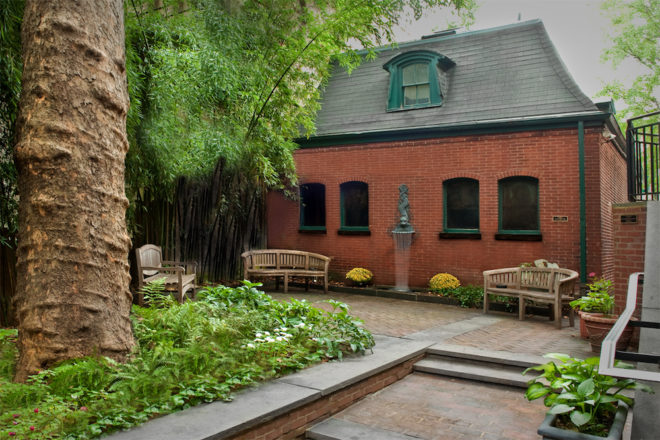 The courtyard and carriage house at the Academy of Vocal Arts. | Photo: John Chew

According to the former owner of 1916 Spruce Street, President John F. Kennedy dined there during his 1960 Presidential Campaign. Records from the JFK Presidential Library Archives indicate that Kennedy was indeed in Philadelphia for a fundraising dinner and speech in October of that year.

Today, AVA students continue to receive exceptional vocal training inside an architectural masterpiece that brings joy to audiences and comforts the ghost of Randolph Wood.