A Symbol of Survival and Hope Returns to the Parkway 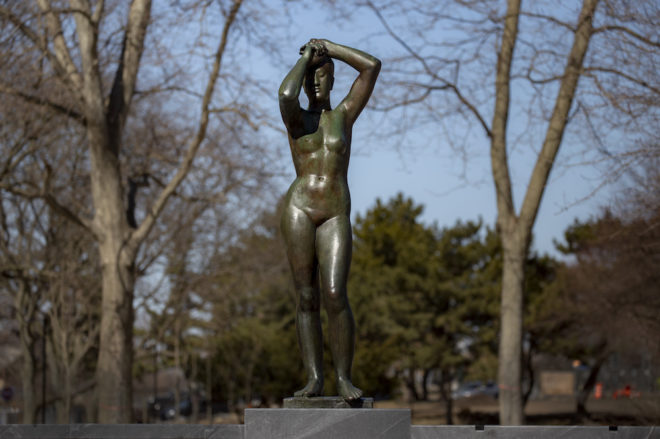 Maja was installed on March 5 in a newly designed park in front of Park Towne Place on the Benjamin Franklin Parkway. | Photo: Meredith Edlow, courtesy of the Association for Public Art

A beautiful, statuesque woman with a storied past never entirely fades from public memory. But after nearly 30 years in hiding, the reappearance of Maja, a seven-foot female nude sculpture, requires a deep dive into her complex history.

Maja (pronounced Mai-uh) was created by German sculptor, printmaker, and designer Gerhard Marcks. An instructor at the Bauhaus, an incubator of experimental art, Marcks was not a Communist or a Jew. Still, the Nazis labeled him a “degenerate artist” due to his anti-fascist politics and support of Jewish art students at the Bauhaus.

In 1933, Marcks was removed from his teaching position and was not allowed to exhibit or sell his art work. He was forced to surrender his bronze sculptures to be melted down for the war effort. Marcks was not intimidated. “Any loafer can destroy a work of art, but he cannot undo the intellectual act,” he once said.

In 1937, the artist’s work was included in the Nazis’ infamous exhibition Entartete Kunst (Degenerate Art), along with works by Picasso, Mondrian, and Chagall. These artists were considered an “insult to German women, farmers, and soldiers” as well as displaying qualities of “mental disease and racial impurity,” according to exhibition notes. Insulted or not, over three million people attended the exhibition. While all of the so-called degenerate artists are revered today, the Hitler-approved artists who participated in a competing exhibition, Great German Art, were lost to the dustbin of history.

Fellow Bauhaus artists Paul Klee and Wassily Kandinsky left Germany. Marcks remained. He never cooperated with the Nazi Party and managed to set up a new studio where he created Maja in bronze in 1942. The following year, when his studio was bombed, Maja miraculously survived. She became a symbol of all that the Third Reich had despised due to her modernist style and sensual form.

In 1949, Maja arrived in Philadelphia as part of the Third Sculpture International Exhibition hosted by the Fairmount Park Art Association, now the Association for Public Art (APA). The APA is the nation’s first private nonprofit organization dedicated to creating a “Museum Without Walls.”

The exhibition was organized to introduce the public to contemporary sculpture from around the world, including Alexander Calder, Jacques Lipchitz, and Pablo Picasso. Maja was installed on the terrace of the Philadelphia Museum of Art from the 1950s until 1992 when she was removed for renovation of the museum’s iconic open space.

In 1952, Maja put on her traveling shoes as part of an exhibition, Sculpture of the Twentieth Century, organized by the Museum of Modern Art (MoMA). The Philadelphia Museum of Art was the first venue for the exhibition, which then traveled to the Art Institute of Chicago, and culminated at MoMA in 1953. Additional casts of Maja are located at the Franklin D. Murphy Sculpture Garden on the UCLA campus, outside Kunsthalle Emden in Germany, and at the Kunst Museum Winterthur in Switzerland.

After nearly 30 years in storage, Maja recently received extensive conservation, including state-of-the-art laser treatment to delicately and meticulously remove surface corrosion and a special wax coating was applied to protect the work from further deterioration. On March 5 Maja was installed in her own newly redesigned park, Maja Park, at 22nd Street in front of the Park Towne Place apartment complex.

The park is a public space developed in a private/public partnership between AIR Communities, which owns the adjacent Park Towne Place Museum District Residences and Philadelphia Parks & Recreation, with support from the Commonwealth of Pennsylvania. The story of Maja and her creator will be told through interpretive signage at the park, online on the APA website, and through the Museum Without Walls audio program. 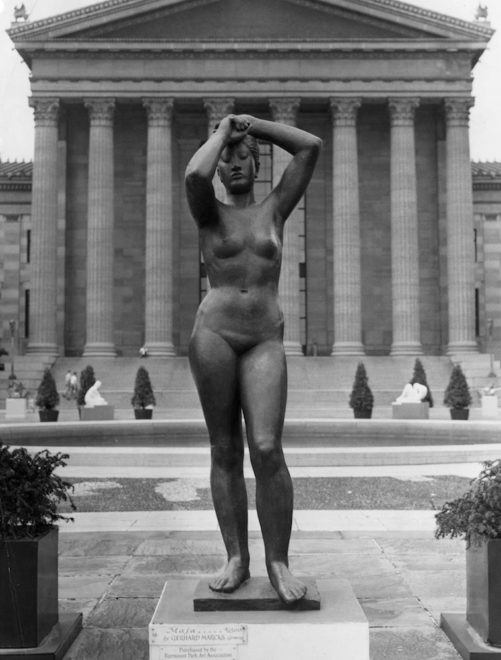 Maja was on display on the terrace of the Philadlephia Museum of Art from 1950s until 1992. | Photo: Image courtesy of Temple University Libraries, Special Collections Research Center

Paul B. Jaskot, professor of Art, Art History and Visual Studies at Duke University, was commissioned to write an essay on Marcks commemorating Maja Park. “Maja, a sculpture that is both conventional in its subject and modestly modernist in its slight distortions of the body, points to the long history behind Marcks’ persecution. The sculpture reveals the very real and difficult choices made by any citizen in Nazi Germany confronted by powerful conditions of growing authoritarianism and increasing oppression,” wrote Jascot.

“Marcks was a very brave man in a very racist and reactionary time,” said Penny Balkin Bach, APA executive director & chief curator. “Despite persecution for speaking out against antisemitism, despite countless setbacks that would understandably lead others to give up, Marcks continued to create work. He continued to remind us of the importance of art and the role of the artist in society.”

As Philadelphians emerge from their pandemic seclusion and rediscover the pleasures of the Parkway, Maja awaits them with her message of tolerance, survival, and hope.