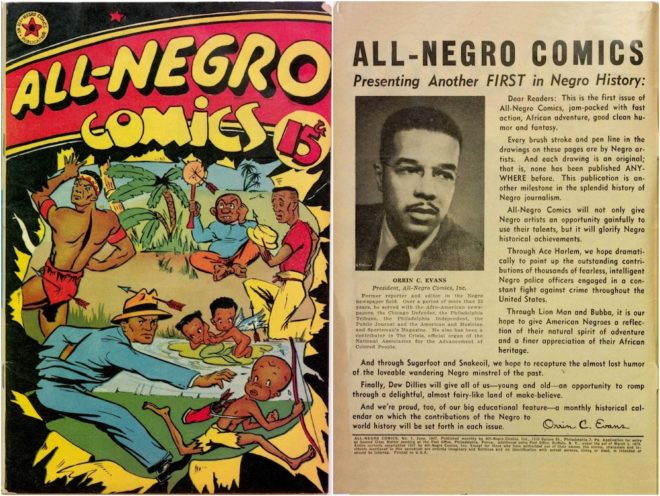 Throughout high school my concerns for the real world were almost non-existent. Each day became an exercise in patience as I waited to be dismissed so I could rush to Fat Jack’s Comicrypt at 5th Street and Olney Avenue. My high school experience was pretty typical. Fights, crushes, detention, good and bad grades, and my fear of having to choose what to do with the rest of my life by the end of my senior year. During those dwindling days I had comic books as my escape. They kept me from having to deal with the real world. Instead, I kept reading and immersing myself in fantasy.

Throughout my personal story arc as a Black person, I grew accustomed to the faces of white characters filling my comic book pages. Yet, from time to time something odd happened. Something that caught me by surprise—the inclusion of a super strong and invulnerable Black character!

And yet, more often than not, whenever catastrophe struck or an alien invasion was imminent, a white savior emerged to save the world. The new and rare Black or other non-white ethnic characters would never be fully introduced and, after their arcs peaked, they disappeared for a while or indefinitely. Only after I took a step away from comic books did I come to understand the symbolism of what I was reading.

As comic book-based movies became more prevalent, I felt nostalgic while seeing familiar story lines portrayed on the screen. But that feeling was overshadowed by the realization of the lack of diverse characters. The onscreen ones were portrayed as paint-by-numbers characters without real depth.

Growing up I had simply accepted the reality that white heroes were the real ones and almost everyone else was secondary or temporary. Eventually, however, I started to ask how that reality came to be in a medium based on imagination in which anything is possible, even having heroes from different ethnic groups. 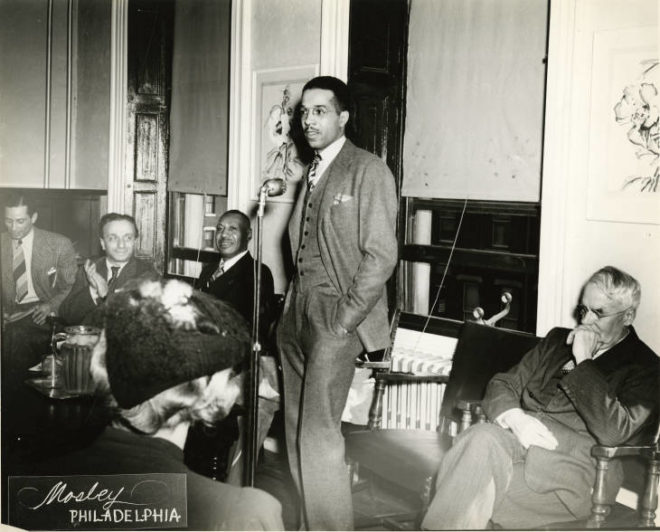 In 1947, Orrin C. Evans and George J. Evans Jr. formed All Negro Comics Inc. in Philadelphia, the first Black-owned comic book publishing company in the United States. Orrin Evans is known as the father of Black comics books. His motivation for starting the publishing company was to counter the poor Black and ethnic characters represented through stereotypes and derogatory characters like Ebony White and Whitewash Jones, one of Captain America’s sidekicks.

Born in 1902 to George J. Evans Sr. and Maude Wilson Evans in Steeltown, Pennsylvania, Orrin Evans began his journalism career at the age of 17 by writing for Sportsman’s Magazine. By age 19, he landed a job at the Philadelphia Tribune and finally the Philadelphia Record, breaking the color barrier at these white publications.

Segregation and bias would prove to be a constant threat to Evans’ life due to his uncovering of the racial segregation in the Armed Forces and being removed from big news stories like the 1932 Lindbergh kidnapping at the request of Charles Lindbergh. After the Philadelphia Record ceased publication in 1947 he worked with George J. Evans Jr. and various African-American writers and artists to create comic books with a positive Black cast of characters and socially conscience stories that spoke directly to their intended audience.

Their first and only comic, All-Negro Comics #1, featured stories with the following characters: Lion Man, a college educated African-American man hired by the United Nations to safeguard a uranium deposit on Africa’s Gold Coast, Ace Harlem, a private detective who is as famous as Sherlock Holmes, Hep Chicks on Parade, a joke page featuring exaggerated women’s fashions, and Dew Dillies, which was targeted at younger Black audiences. 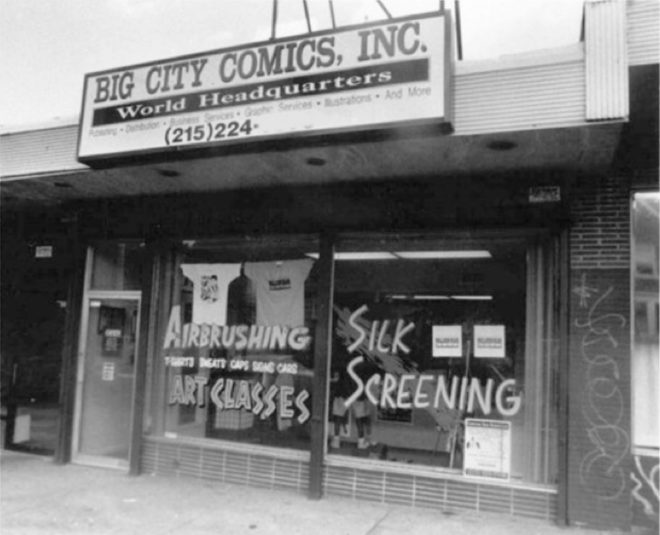 Dr. Guy A. Sims and Dawud Anyabwile, creators of Brotherman comics, got their start with an airbrush t-shirt shop in New Jersey. Pictured here is the Philadelphia headquarters of their comic book publishing company, Big City Comics Inc., in 1994. | Photo courtesy of Emory University

This would be the only issue published for two reasons: the fear of impending competition from white-owned publishing companies that planned to release their own Black characters and prejudiced distributors that worked to block Evans from purchasing materials needed to continue production.

This resulted in no Black-themed comics being printed until the early 1990s with the debut of Brotherman and Jam Quacky.

Recently, a copy of Brotherman has been added to the Smithsonian’s National Museum of African American History & Culture as an item of cultural significance. Different from other heroes, especially during the high-octane comics of the 1990s, Brotherman is the alias of attorney Antonio Valor who uses his encyclopedic knowledge of the law and fighting skills to battle crime. 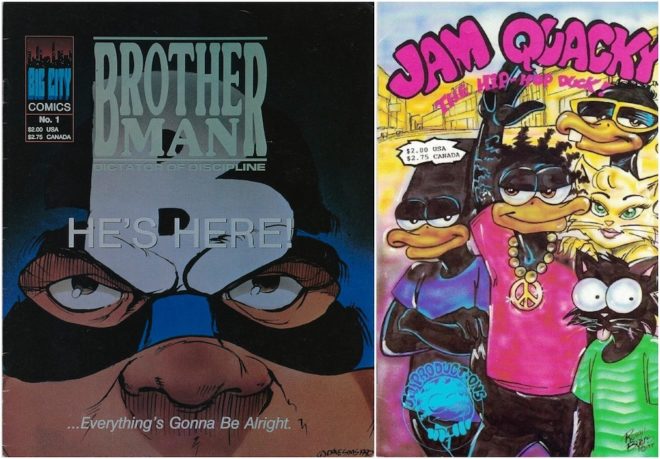 Philly-based Black illustrators saw their creations come to life with the publication of  Brotherman No. 1 in 1990 and Jam Quacky the Hip-Hop Duck! #1 in 1991. | Images courtesy of the National Museum of African American History & Culture and MyComicShop.com

On the more humorous side of the spectrum, local artist Reggie Byers introduced Jam Quacky, “the hip hop duck,” after a two-year stint of penciling Robotech for Comico, which started his run of comics that appeal to young African American children such as Kidz of the King, a Christian-themed comic, Afroboy!, and Puffgirl.

In both cases the artists depicted a universe that put Black and brown heroes in settings that African Americans could relate to.

I spoke with educator Yumy Odom, founder and president of the Philadelphia-based non-profit East Coast Black Age of Comics Convention (ECBACC ) on the development of African American and ethnic characters and their impact on black communities. Mr. Odom clarified this situation in a single statement. “Seeing comic characters that you are connected to is a way to bolster self-esteem and they are a gateway to improved academics.”

Mr. Odom, who got into comics in 1975 after an arm injury drew him towards heroes like Storm from the X-men and Black Panther, whose strong African connections has attracted billions of fans since their introduction. He clarified that these and similar non-pandering characters are presented with a a vision of depth and that characters that simply pander fade away due to not having any longevity, becoming disingenuous to Black audiences. “This process of cultivating the black comic book community is exacerbated by stigma and social trauma that place “Black” images low on the totem,” said Odom.

ECBACC and its various programs like the Glyph Comics Awards, a yearly comic convention that hosted Nichelle Nichols of Star Trek fame in 2008, and AfriCoz, which celebrates Black characters with cosplay and workshops to improve literacy, critical thinking, and art appreciation through comic books and as a stepping stone to academic success and potential careers. 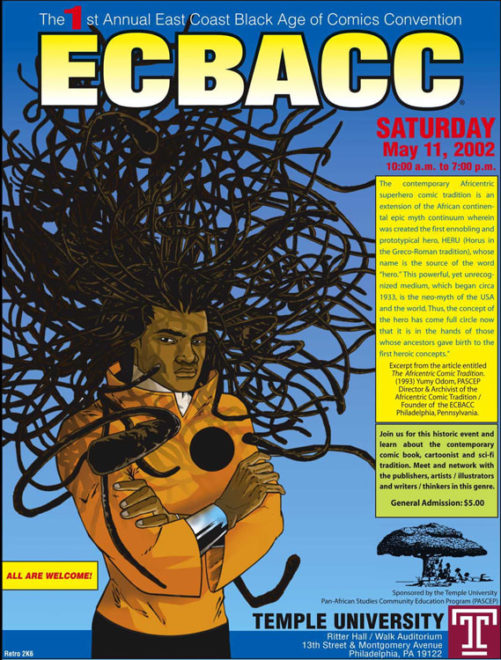 Odom explained that the changing playing field must be kept up to have original Black characters in all aspects of content creation, including art, which habitually takes modified caucasian features to make the character passable as Blacks. “Comic companies often reused old characters and make them Black or homosexual to pander around current politics instead of developing new characters,” explained Odom.

It appears that the key to having more diverse characters across the comic book landscape is to utilize diverse creators and allow them the opportunity to put forth their work. The hardest part is to allow them to work without feeling encumbered.

Comic book readers can sometimes be the most difficult readers when it comes to change, so don’t change what is not broken in regard to current characters. Instead, introduce new characters that can be allowed to grow and develop over time. The most popular characters are the ones that took decades and multiple arcs to become the heroes we know them as now. Why can’t the same process be repeated today?

If comics are to reflect the world we live in, then the time has to be put into it. After almost 75 years since the birth of All Negro Comics #1, the vision created by Orrin C. Evans and George J. Evans Jr. should be honored by allowing today’s inclusive work to flourish or else the only heroes who can save the world will remain white and all-powerful.