A Building Demolished, but the Mission Continues 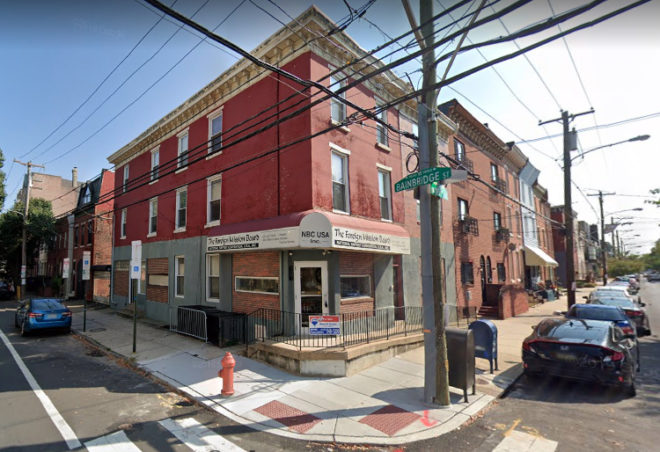 The recent demolition of 701 South 19th Street on the surface seems like a routine gentrification story in Graduate Hospital: an aging, three-story row house and an adjacent address being replaced by upscale, new construction.

The narrative broadens however, when you take in the sign that had hung over the door of the first floor, proclaiming it the home of “The Foreign Mission Board, National Baptist Convention, U.S.A., Inc.” Still, perhaps, not overly noteworthy in a city chock full of churches and their ancillary buildings and programs. And then there’s the dizzying array of Baptist affiliations, splits and spin-offs, that is hard for an outsider to keep track of.

Although cooperative efforts among Black Baptists date back to the Antebellum period, the National Baptist Convention U.S.A., Inc. NBC-USA traces its roots to 1880, when a number of Black Baptist ministers met to create a cooperative organization that extended beyond state lines. The resulting Baptist Foreign Mission Convention is considered the origins of the NBC-USA. Its current structure was created in 1895, when three Black Baptist conventions, the Baptist Foreign Mission Convention, the American National Baptist Convention, and the National Baptist Education Convention agreed to consolidate. In its founding year, the resulting organization boasted a membership of over one million, pastored by more than 10,000 clergy. Within the new organization, each of the founding conventions had a different primary focus of foreign missions, home missions, and education, respectively. Today, NBC-USA is one of four Black Baptist conventions in the United States. 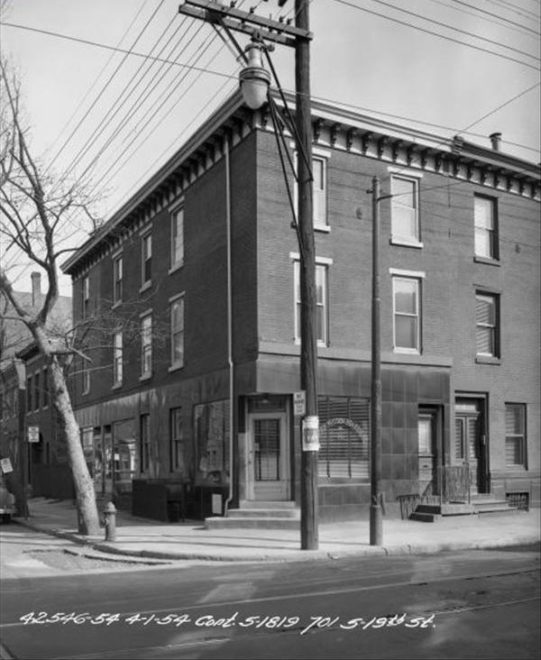 The phrase “foreign mission” conjures up a narrative that holds some historical truth: white Christians seeking to convert people of color on other continents. But the story at 701 South 19th Street tells another, less acknowledged side. Even before emancipation, Black churches in the United States also engaged in missionary work in Africa and the Caribbean.

In the International Bulletin of Missionary Research in 1986, Gayraud S. Wilmore, at the time Dean and Professor of Afro-American Religious Studies at New York Theological Seminary, noted the concerns of Black missionaries extended far beyond the religious and included industrial training and rural development programs. Dr. William J. Harvey III, who headed the Foreign Mission Board (FMB) for over 40 years explained to Wilmore that the Black Baptist missions had “a completely different philosophy and motivation than the white churches. The Protestant missions of that time were mainly concerned with the salvation of the souls of Africans. Black Americans were concerned with the material as well as the spiritual welfare of the people. That is why we were the first to introduce industrial missions to Africa.” 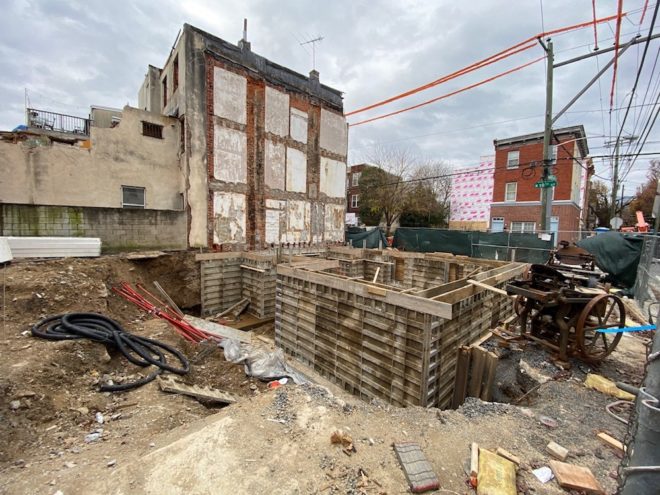 701 South 19th Street was demolished over the summer in 2020. The Foreign Mission Board’s old letterpresses can be seen in the foreground. | Photo: Michael Bixler

Behind that low-key facade at 19th and Bainbridge Streets, the FMB of the NBC-USA operated for over 100 years. While the Convention is headquartered in Nashville, Tennessee, the FMB is paired with one of the member churches, the First African Baptist Church, the oldest Black-founded Baptist church in Pennsylvania. Although in 2015 the church moved into the former St. Callistus Roman Catholic Church in Overbrook Park, its original location was at 1600 Christian Street, six blocks from the FMB building. That same year, the original church building, which had been erected in 1906, was placed on the Philadelphia Register of Historic Places. In his nomination, historic preservationist Oscar Beisert noted the building, designed by the Philadelphia firm of Watson & Huckel, was “one of the few examples from its period of a purpose‐built, architect‐designed church for an African American congregation.”

The FMB had noteworthy leaders during this time. Dr. C. C. Adams served as corresponding secretary from the 1930s into the 1960s, supervising over 60 mission stations in Africa and making three extended trips there. In 1948 he was knighted by the Liberian government for his service to the country. Adams was succeeded by Dr. William J. Harvey III, who was such a prominent figure in the Baptist Missionary world that his tombstone in Eden Cemetery in Collingdale, Delaware County, refers to him as “Mr. Foreign Mission.” 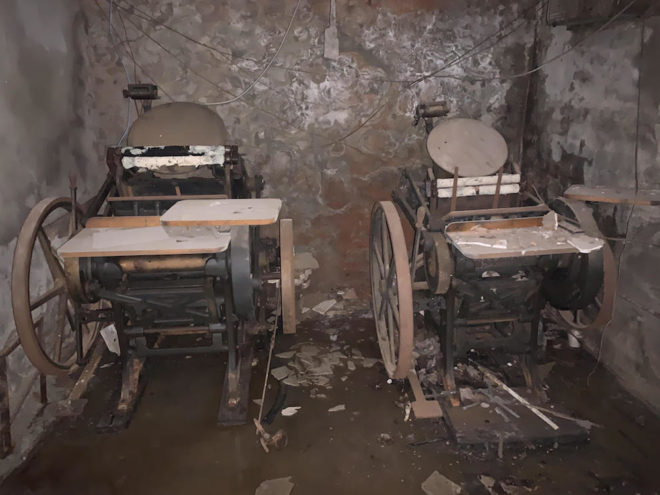 A close up of the Foreign Mission Board’s 100-year-old letterpresses, which remain at the site on the corner of 19th and Bainbridge Streets. | Photo: John Giordano

Publications were a central part of the FMB’s activities, both for their mission work and for donors and church members at home. This past summer, the demolition of the FMB building uncovered evidence of that when, in the exposed basement, two antique printing presses were revealed. A 1916 street map of the city that identifies the FMB building notes the presence of a printing room at the rear.

The pair are Chandler & Price “New Style” letterpresses, dating to around 1914. Tom Familetti, CEO of the site’s developer, Zatos Investments, said he reached out to firms knowledgeable about antique printing machinery to try to find a home for them. “Unfortunately, they were deemed too old and rusted to salvage,” he explained. “We felt bad because they’re antiques, but we’re probably going to have to call a scrap company.” 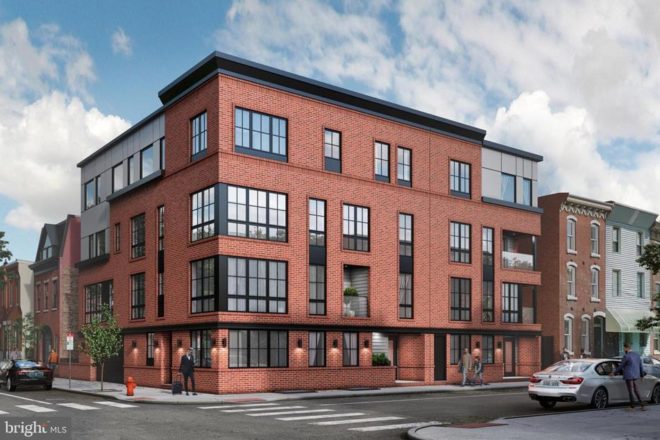 The Southbridge Condos will fill the lot at 19th and Bainbridge Streets. | Rendering: Bright MLS Homes

The FMB missionaries had a quite a bit of local company. In an interview in the 2002 book African American Experience in World Mission: A Call Beyond Community, Elder Donald Canty of Carver Foreign Missions, founded in Philadelphia in the 1950s, referred to the city during this period as the “capital of the world for missions as far as African-Americans are concerned.” The 1960s saw the establishment of more groups, including the Afro-American Missionary Crusade and Germantown’s Have Christ Will Travel Ministries. Canty credited much of this growth to the Philadelphia College of the Bible (now Cairn University), one of the few institutions at the time that admitted Blacks.

Today, the FMB has mission stations in Liberia, Sierra Leone, Guinea, South Africa, Lesotho, Swaziland, Malawi, Zambia and Nicaragua. According to their website, they have plans to expand to Guyana, Grenada, Haiti, Jamaica, and Saint Lucia.