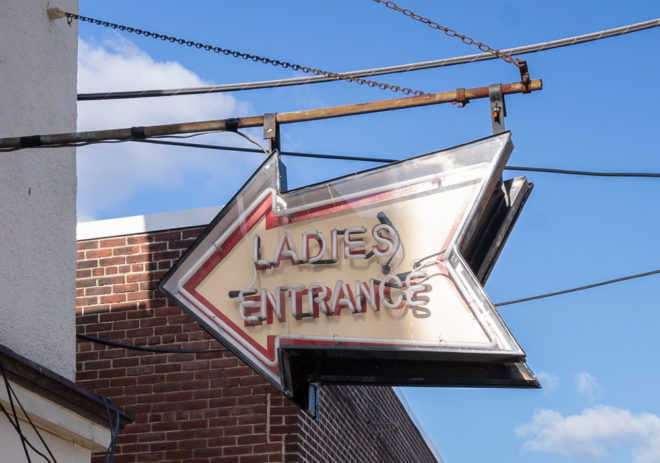 Everyone knows that when bars advertise Ladies’ Night it is less so for the ladies and more so for straight men who hope to flirt, hook up, or even find love. In bars that host such theme nights, women are treated like a separate class of people, one to coax and goad into giving men their undivided attention. 100 years ago women were also treated like a separate class of people in bars–one to be avoided, segregated, and tolerated.

Working-class bars and saloons between the late 1800s and the beginning of Prohibition were the domain of men, a place to escape the demands of both work and family. The presence of women was a potential threat to their enjoyment of male camaraderie and their sense of masculinity. This is why in many bars of this period women were required to enter through a separate door marked with a sign reading “Ladies’ Entrance” and had to drink in a room in the back of the building. In Philadelphia, as in other American cities, a handful of “Ladies’ Entrance” signs remain intact today.

According to the late historian Madelon Powers in her book, Women and Public Drinking, 1890-1920.: Women in the New World, the saloon “was still undisputed male territory with its stand-up bar, spittoons, mustache towels, brass foot rails, and other symbols of ‘masculinity emancipate.’ Adventuresome though most saloon going women were, they were not agitators; their aim was sociability, not social equality, and their stepping out did not include stepping into bar areas where they were not welcome.” 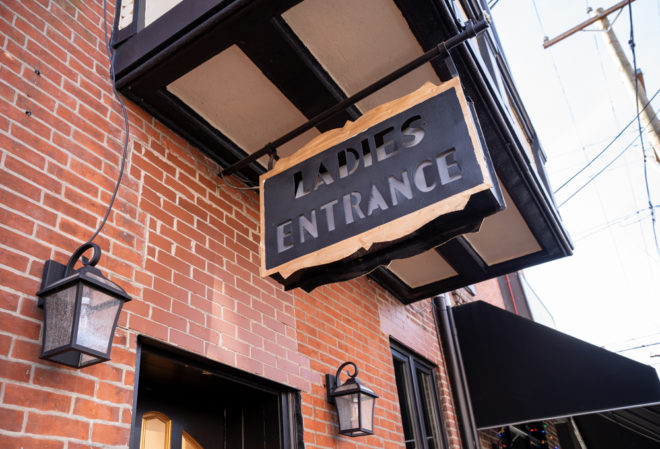 Thus, the main purpose of the saloon’s separate entrance for women was to minimize their interaction with men so as not to disturb the sacred sense of shared masculinity. It is also true that these entrances protected women from the gaze of judgmental neighbors. The separate entrances, as Powers explained, “permitted them to enter inconspicuously and minimize public scrutiny of their comings and goings” and to shield them from “the disapproving glances of their more conservative neighbors and peers.”

The presence of women in saloons during this time wasn’t just a threat to male enjoyment. It was a threat to the entire male gender identity. “As long as women did not publicly drink in female homosocial places, men could claim that they were the masters of public drinking,” noted Adam Blahut in his dissertation, Raising the Bar: Consumption, Gender, and the Birth of a New Public Drinking Culture. “A business dedicated to offering women liquor and a space to mingle and relax with other women endangered the dominance of the male-dominated saloon and, consequently, male gender identity,” wrote Blahut.

Whether it is apparent today to people that see these signs still attached to buildings understand that they represent a stringent conception of masculinity isn’t clear. The “Ladies’ Entrance” signs that remain hanging in Philadelphia and elsewhere perhaps exist for no reason other than the building owners’ decision to keep them up for history’s sake. For some that own bars that occupy buildings with these signs, they are like any other type of bar ephemera, likened to an old neon sign, a juke box, an old sports jersey, or any other token of a bygone era. 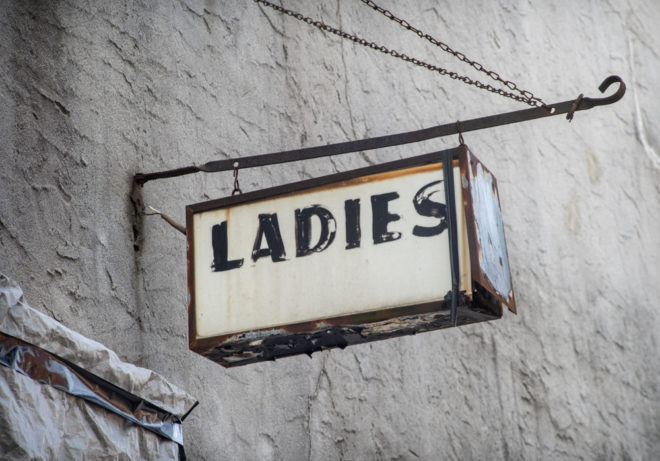 “It’s more there for nostalgia than anything else,” explained Jim Savage, owner of Julie’s Corner Bar in Port Richmond, which still has a “Ladies’ Entrance” sign that was placed on the facade well before Julie’s opened in 1956.” All my patrons know they can go in the front or the back. We’ve been here 55 years and the sign was already there. That’s it, ya know?”

When Jezabel Careaga opened Gavin’s Café in June 2010 in a Fitler Square building that was formerly an Irish bar, she realized the building’s “Ladies’ Entrance” sign was a chance to educate passersby about a past they might otherwise be unaware of. Instead of removing the sign, she restored it and installed new lights, embracing it as a symbol of progress. “I think it was this idea that it has to stay up because it is part of history. It is a reminder that we have come a long way, but there is also much more to do,” she said. “There is a school around the corner and parents I know would explain to their children that women were once required to use a separate entrance there.” Careaga’s business has since moved to West Philly, but she is still happy to drive by and see that the building’s new tenant, Rowhome Coffee, decided to keep the sign.

If these old signs can be used to educate children and remind adults about the history of progress for women, their presence in the public sphere isn’t without value, but there is much more to the story. “Ladies’ Entrance” signs and the segregated bar culture they symbolize tell us about the evolution of gender roles, the fight for women’s voting rights, the temperance movement, and the relationship between all three. 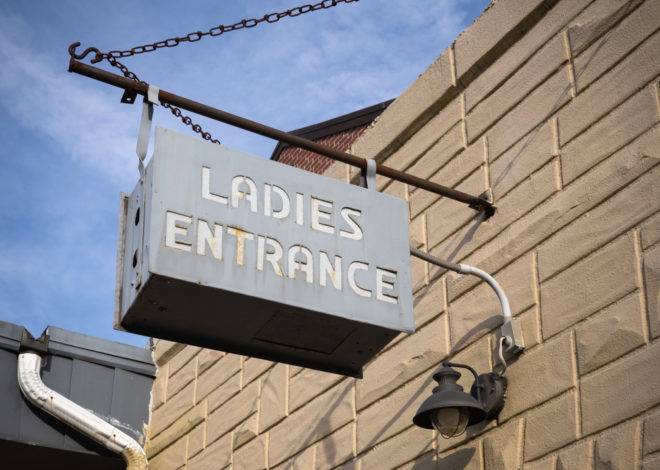 Since male gender identity was once inextricable from the male presence in saloons, it is no coincidence that the two major social issues of the time, the suffrage movement and the temperance movement, were in part responses to some of the harmful effects of male gender identity: drunkenness and its resulting maltreatment of women.

In her book, Women, Men, and Alcohol in America, 1870 – 1940, historian Catherine Gilbert Murdoch explained that, “Both woman suffrage and prohibition challenged traditional male public behavior. Supporters of the two amendments considered alcohol and politics pathologically intertwined: both male drinking and male politics required female intervention.” Suffragists and Prohibitionists were fighting to change society by changing male behavior. “The women who spoke in favor of prohibition and for suffrage were not describing simply a saloon-free America, but were arguing for the elimination of the entire masculine culture that made institutions such as the saloon possible,” wrote Murdoch.

At the time of the introduction of Prohibition in 1920, a slight dissolution in gender roles was reflected in women’s increased interest in drinking. Until this point, the home was the domain of women, and the political and social world was the domain of men. But when women won the right to vote in 1920, they entered the world of politics. Conversely, men were beginning to take a greater interest in domestic duties. “I would argue that just as male religious movements, increasing interest in fatherhood, and changing emphases in fiction indicate the decline of a separate female hegemony, so, too, does women’s public drinking represent the dissolution of the male sphere,” wrote Murdoch. “Alcohol use, like the right to vote, was no longer a uniquely masculine attribute.” 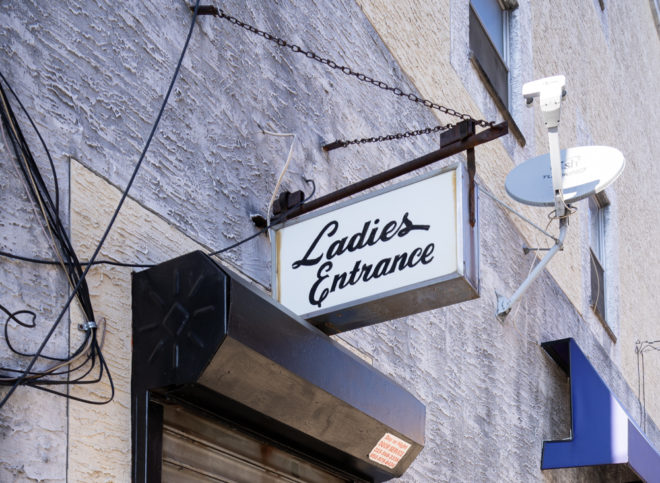 By the time Prohibition was repealed in 1933, it was much more acceptable for women to drink in public than it was when Prohibition was introduced. A New York Times article from 1933, “From Saloon to Speakeasy–And Now?,” attributes an overall change in drinking habits during Prohibition to the participation of women in drinking culture. This happened partly because they began to be included in at-home cocktail hours during WWI and partly because a wave of German, French, and Italian immigrants brought with them to the United States drinking cultures that included women.

However, the main reason that women were more accepted in public while drinking at the time of the repeal of Prohibition is the culture that sprang out of speakeasies. Paradoxically, drinking became socially acceptable for women when it became legally impermissible for everyone. The Times article admitted that “Prohibition added the zest of the forbidden and so hastened the sharing by women of what had been man’s exclusive privilege in this country.” 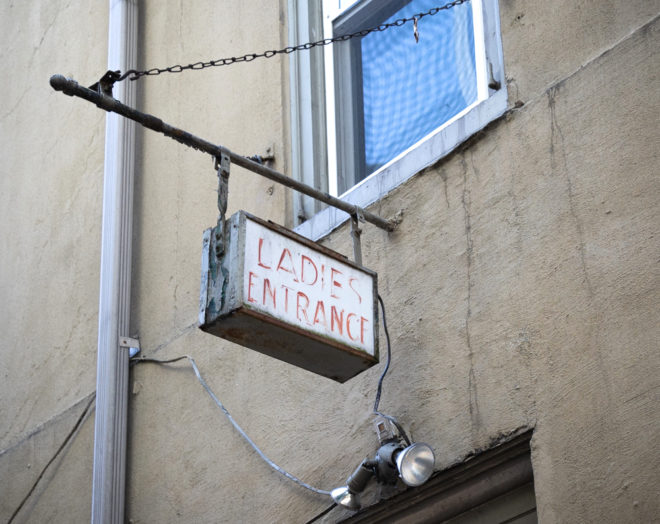 During Prohibition, it seems men realized that the presence of women could make drinking more fun. The 1933 Times articles goes on to note, “Mainly the difference between the new saloon and the old will lie in the refining and restraining, if also intriguing, presence of women in most drinking places. The drinking place of the future will be co-educational.” It is possible that part of the reason that women were welcomed into public drinking spaces is because their presence could actually make men feel more masculine, not less. As Ladies’ Nights continue to attract crowds in the 21st century, the drinking place is indeed coeducational. But women might still wonder whether it is genuinely coequal, even if they walk into the bar through the front door.