My Mom and Center City: A Love Story 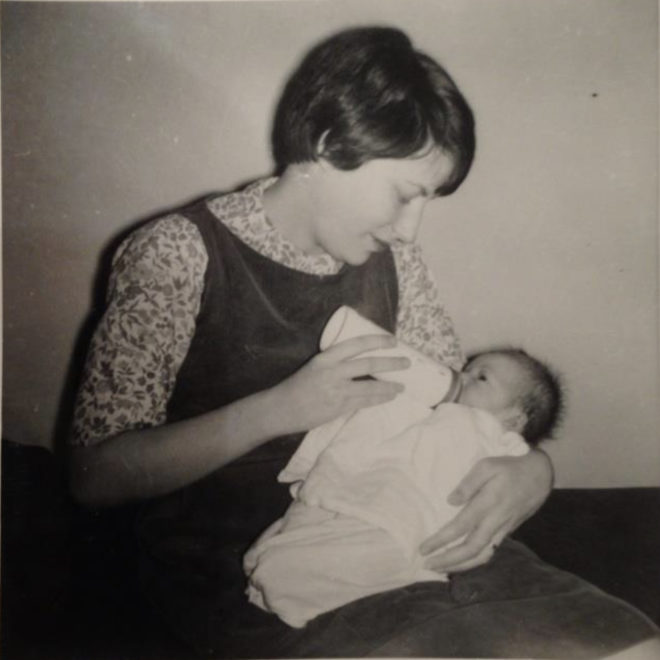 Newborn Amy Cohen with her mother Nancy Nance at their Camac Street home in 1964. | Image courtesy of Amy Cohen

Although my mother grew up in suburban Melrose Park, she was always a city girl at heart. Accompanied by her mother or by friends, she frequently took the train to Reading Terminal to shop downtown. Sometimes they visited the Blum Store, Bonwit Teller, DeWees, or Strawbridge & Clothier. Most often, though, it was Wanamaker’s. A lunch of tea sandwiches and vegetable soup in the Crystal Tea Room was part of her routine when visiting Center City.

As a young teen, my mom would come in town on her own for appointments with Dr. Groth, her female orthodontist. My grandmother drew her a map indicating how to walk from Reading Terminal to the Medical Arts Building at 16th and Walnut Streets. 70 years hence, my mother’s dentist works in that same building.

The Medical Arts Building is one of several locations that form a leitmotif in my mother’s life. My mom, Nancy Herbach Nance, turns 85 on January 26, 2021. She has spent the majority of those years living in Center City.

Wanamaker’s appears frequently in her life story. It was her favorite place to shop for many years. One weekday she and her friend Barbara Korn decided it would be more fun to go to Wanamaker’s instead of Cheltenham High School. Trying on clothes, my mother needed something in a different size, so Barbara went looking only to return to the dressing room looking ashen. “Nancy,” she said, “Your mom’s out there.” The two of them hid in that dressing room for a very long time. 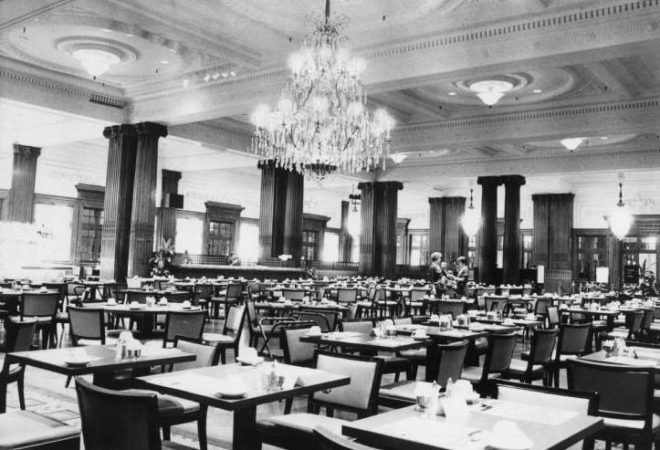 After her freshman year at Simmons College, Mom landed a summer job as a comparison shopper for Wanamaker’s. She was in heaven. Every morning she went to Gimbels, Lit Brothers, Strawbridge & Clothier, and Snellenburg’s to count the number of shoppers in each store’s basement. She returned to the Wanamaker’s cafeteria for lunch. After eating, she played pinochle with another college girl and two older men who lay carpet for the store.

Decades later, my mother spent 14 years as the head law librarian at Drinker, Biddle, & Reath, located, conveniently, right next to Wanamaker’s. I knew that she sometimes poked around the store during her lunch hour. She recently confessed, however, that she also visited her favorite sanctuary when she was supposed to be at work. Her library staff, she explained, was so strong that she didn’t need to be there all the time. At least by this point she didn’t fear running into her mother.

The Curtis Center on Washington Square is another North Star in my mother’s life. The summer after her junior year of college she worked in the personnel office of Curtis Publishing, then home to popular magazines including the Saturday Evening Post, Jack & Jill, and Holiday.

The highlight of that summer of 1957 was when my mother and her parents spent three days at the posh Drake Hotel on 15th and Spruce Streets while their house was being painted. My suburban mother was amazed to walk out the door and see people everywhere. My grandfather would go to his job at Philadelphia Rust-Proof Company, my grandmother would drive to Philmont Country Club to golf, but my mother fell absolutely in love with city living. 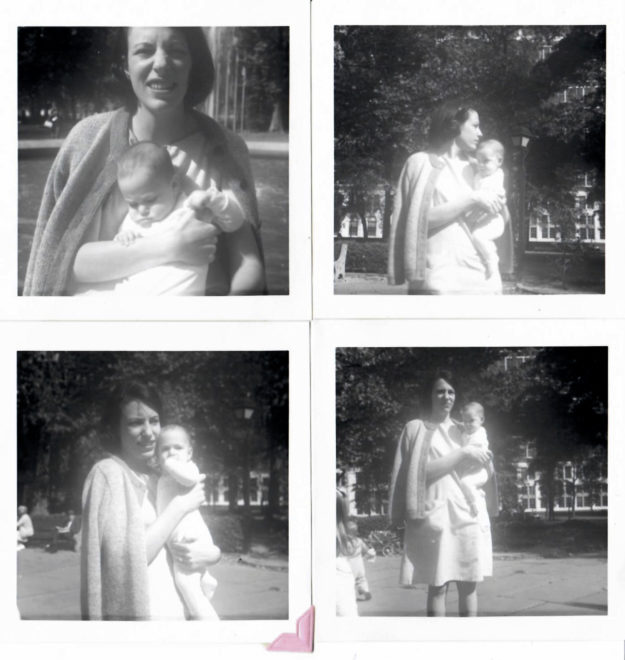 Amy Cohen and her mother in Washington Square in 1964. | Image courtesy of Amy Cohen

After graduation, my mom was hired by Curtis Publishing. This was the “Mad Men era,” so she recalls her boss frequently stumbling back to the office after a three-martini lunch.

While working at Curtis, she began dating a Penn Law student from Camden, my father Arnold Rosenberg. When they married my grandfather offered them $10,000 for a down payment on a house in the suburbs. They declined and instead took up residence two blocks from Washington Square at 920 Clinton Street.

In the early 1960s, my mother continued to work at Curtis Publishing while my dad finished law school. Money was tight. Mom frequented a shop on 10th Street that sold day-old food from Horn & Hardart. Creamed spinach, lima beans, stewed tomatoes, tapioca, rice pudding, and other favorites could be purchased at a deep discount.

Despite their constricted budget, my parents saw every show that came to major Philadelphia theaters. For $1.50 a pop, they went to the Walnut, the Forrest, and the Schubert several times a month. Plays often opened here, and my mother recalls seeing many big hits before they reached Broadway including A Raisin in the Sun, Gypsy, The Miracle Worker and Sweet Bird of Youth with Paul Newman. Fun fact: Paul Newman shared a birthday with my mom, although he was 11 years her senior. Odd fact: my gynecologist, Dr. Paul Neumann, was also a January 26 baby. 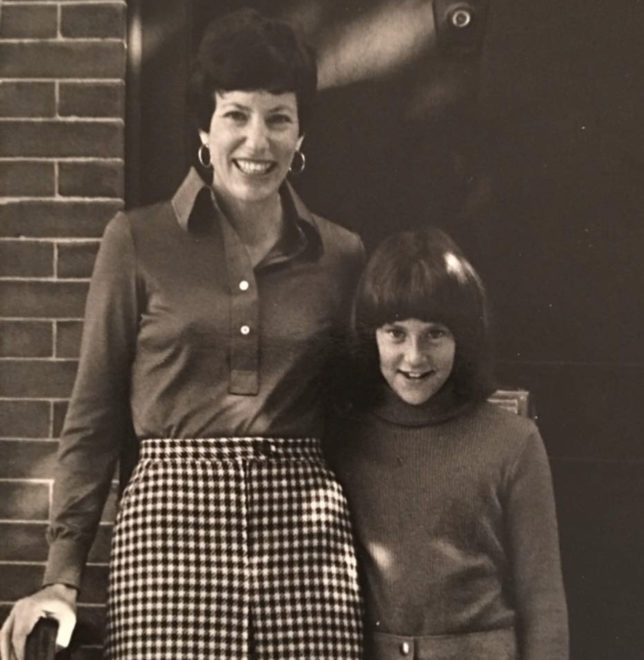 Amy Cohen and her mother in front of their Delancey Street townhouse in 1973. | Image courtesy of Amy Cohen

Once my sister and I came along 13 months apart, my mother continued to walk to Washington Square, her favorite outdoor gathering spot, on a regular basis. No longer the Curtis career gal, she pushed a double stroller to the square from our home on Camac Street to enjoy the companionship of other moms with young kids. They decided to form a pre-preschool group. Since none of the moms had any expertise in early childhood education, they consulted a local woman who did: Ruth Hilda Holmes, wife of Philadelphia city planner Edmund Bacon and mother to six children. (That, of course, is my six degrees of Kevin Bacon story.) They hired a teacher who met the criteria that Holmes suggested and reserved a Hopkinson House community room three mornings a week.

By the time I started kindergarten, we had moved to the Fitler Square neighborhood. My parents made my sister and I feel lucky to be raised in the city, and we both treasure memories of our Center City childhoods and our close-knit urban village.

In the mid-1970s my mother and three women on our block formed a communal cooking group. Each member was assigned a weeknight to cook for the other three families in the group so that each mom only cooked once a week. Genius!

During her 63 years in Center City, my mother has witnessed dramatic changes. She remembers when Bookbinder’s and Helen Segal Wilson’s were the only restaurants for a night out. When the first “restaurant renaissance” took place in the early 1970s, my parents frequented Astral Plane, Lickety Split, Frog, Friday Saturday Sunday, and the Black Banana. Although I’m now accustomed to being among the oldest patrons in any trendy restaurant, my mom and stepdad were, pre-pandemic, always discovering places before they became popular. The staff at Suraya knew them by name before most people had heard of the place. 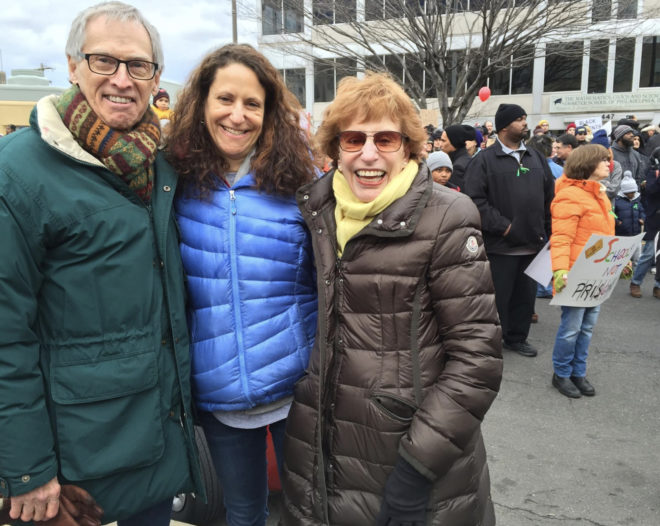 A year after I started college, my mom and stepdad moved to Independence Place at 6th and Locust Streets, a stone’s throw from the Curtis Center. They’ve lived there for nearly four decades. A silver lining during the time of COVID-19: my mother has seen Washington Square, her square, get much use by an array of people. It has become one of the city’s major outdoor gathering places. Walks around the square are my mom’s pandemic exercise, and she seems to know every dog that passes by. She and I have met in the square numerous times since March, masked, but happy to see each other in person.

One more Nancy Nance story. A year ago, I was chatting with my mom on the phone. I told her that on the upcoming Friday night I planned to take my younger daughter to a drag show in the Gayborhood featuring one of my former students. Mom told me she and my stepdad were having dinner at 13th and South Streets that night and would love to stop by afterwards. I did not take her seriously. As it turned out, my then 18-year-old daughter’s fake i.d. did not pass muster, so she took an Uber home. I was okay on my own in the crowd of much younger people across the gender identity spectrum. Soon, though, I received a text from my mom: “We’re next to the stage. Where are you?”

My mom was destined to live in Center City, the Mecca of her suburban adolescence. More than six decades of urban living explain why my beloved 85-year-old mother remains among the most stylish, hip, and youthful people I know.