Mt. Airy Couple Seeks to Create Community Space “For Us, By Us” in Philadelphia Sun Building 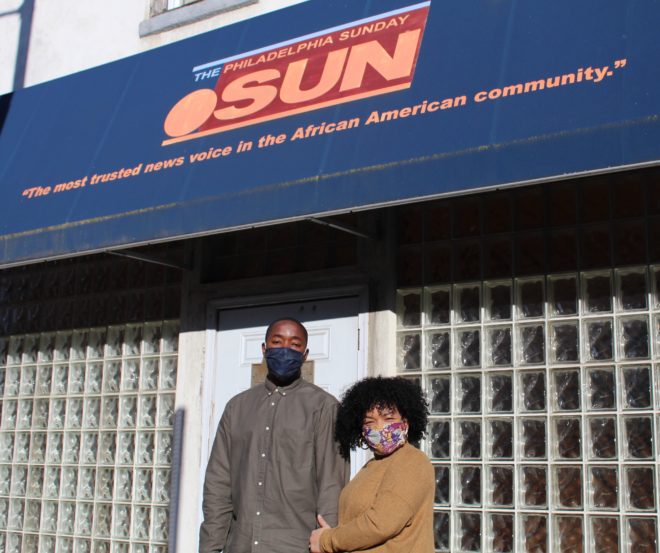 Antoine and Samantha Joseph are crowdsourcing funds to renovate the former Philadelphia Sunday Sun building in Mt. Airy. The couple, who have been married for six years, owns a house around the corner. They have watched the steady rise in profit-driven real estate development–much of it initiated by private developers from outside of the community and Philadelphia looking to cash in quick–that has been carving up the neighborhood with new construction. When they learned the Sun building was up for sale, Antoine and Samantha decided to try their hand at creating the type community-focused development they wanted to see.

Antoine, who describes himself as an engineer and a part-time real estate agent, grew up in the neighborhood. Samantha has been in Philly for 11 years and is currently working towards her doctorate in community health at Drexel University. With their complementary skill sets and familiarity with the neighborhood, they hope to create a space that represents Mt. Airy and that is “For us, by us.”

The Philadelphia Sunday Sun was founded by renowned Philadelphia activist J. Whyatt Mondesire in 1992. Antoine knew the Mondesire family from his childhood growing up in the neighborhood, so the building’s history is something he is personally connected to.

In 2019, Philadelphia City Council voted to rename the stretch of 6600 Germantown Avenue J. Whyatt Mondesire Way in honor of his legacy. Mondesire died in 2015 from a brain aneurysm at the age of 65. His son, Joseph, co-owns the paper today, which now operates out of a different location.

The Josephs hope to both honor the building’s history as the 20-year home of the Black-owned paper and provide a space that serves the present community.

“We’ve been really paying attention to the amount of change happening in our neighborhood. We were just looking at the Sun building, like, ‘We hope that doesn’t go down, we hope we don’t lose that,” Samantha said. “We noticed it was on the market and started asking questions trying to figure out who owned it and what was going to happen to it.”

After investigating further, the couple decided that they had the drive and the knowledge to try to buy and rehab the building themselves as first-time developers.

The commercial building at 6661-6663 Germantown Avenue has a ground floor storefront and two apartments above, making it an ideal candidate for a straightforward development model where the two-bedroom units can be rented out at fair market value to help support the community space below.

“Since I’m in community health and Antoine is an engineer and in real estate it is a really good combination,” said Samantha. “I’ve always wanted to contribute to our neighborhood in that way and create a community-facing space.” 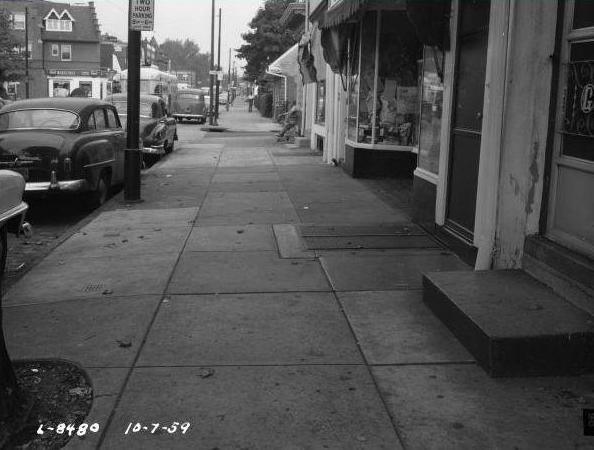 6661 Germantown Avenue, at right, in 1959. | Image courtesy of PhillyHistory.org

The building is not currently listed on either the national or local historic registers. Eventually, the Josephs would like to pursue designation, specifically to take advantage of the federal rehabilitation tax credit which would help out with construction costs.

The couple also want to use space in the building to honor and display its history and connections to the African-American newspaper, the NAACP, and the legacy of the Mondesire family. What exactly that looks like is yet to be determined.

For now, their primary focus is to complete the purchase and stabilize the building, which requires some structural work due to lingering water damage. The couple also plans to restore the storefront, which has undergone significant alterations over the decades, like stucco and the introduction of glass block.

They envision the community space as a resource that reflects the needs of socially engaged and longtime residents. “Mt. Airy has a very specific culture and the [community] fabric is very intact,” said Samantha. “People are very proud of their neighborhood and want to support the local community. What we really want is to create a space that is going to honor that.”

The Josephs are clear that they are not against new construction and development in the neighborhood. However, they are concerned about its scale, pace, and lack of community planning and how drastically the physical traces of the history and culture of the area are being obscured or eliminated.

“Change happens in communities. Gentrification happens. But it doesn’t always have to lead to displacement and erasure,” said Samantha. “I envision the community space being a meeting space that supports local residents and local businesses. Maybe a flexible working space. We’re also thinking of possibly having a podcast studio, which feels very Mt. Airy.”

Negotiating the sale, which officially began in June, has been a long process. They note that the property has been put up for Sheriff’s sale in the past, and there are still a few small legal and financial issues that they’re trying to sort out prior to solidifying the purchase. As with most unconventional real estate projects, the process can be a little daunting. “Every other day, we’re like, ‘Man, can this actually happen? We’re just two people here from Mt. Airy, can we actually pull this off?’ But we just keep going. Until we can’t do it, we’re going to try to do it,” Antoine said.

So far, community enthusiasm for the project has kept the couple going. “We have to raise a good amount of money, but we have a lot of support,” Samantha said. “People are talking about it and people are excited about it. The support has definitely been there, so that helps.” On Monday, December 14, the Josephs announced through their campaign’s Instagram page that they had secured a closing date for the purchase and will be accelerating a push for donations over the next 10 days.