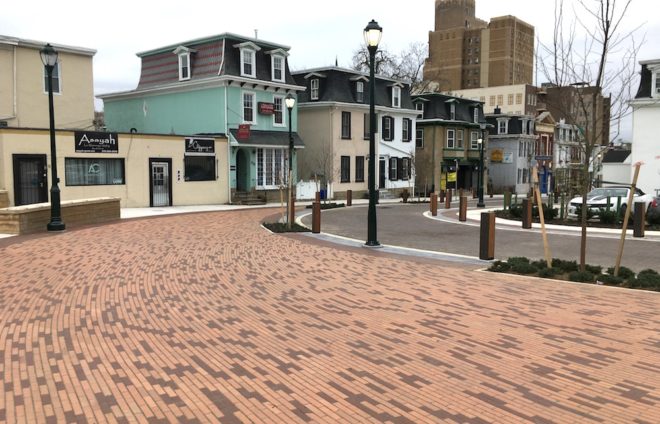 Keith Q. Schenck began patronizing the Maplewood Mall back in 1987. As someone who prefers vegan or vegetarian food, he said he found the Maplewood Nutrition & Dietary Food Shop to be a reliable stop for ingredients and other supplies. Germantown’s pedestrian mall is not widely known around the rest of Philadelphia. It was created in the 1970s as part of the City’s expansive strategy for urban renewal and is still one of the neighborhood’s best-kept secrets.

“It certainly was a staple in the community,” said Kieth Schenck, founder and president of Friends of Germantown NW, a group that he said will be providing stewardship and maintenance services at the recently renovated mall. “It’s a community benefit,” Schenck said of the renovations. “People might look at it more as a cultural gathering spot, a community destination, and it can still provide a place for pop-up events. It looks like everybody is trying to configure new ways to use it.” 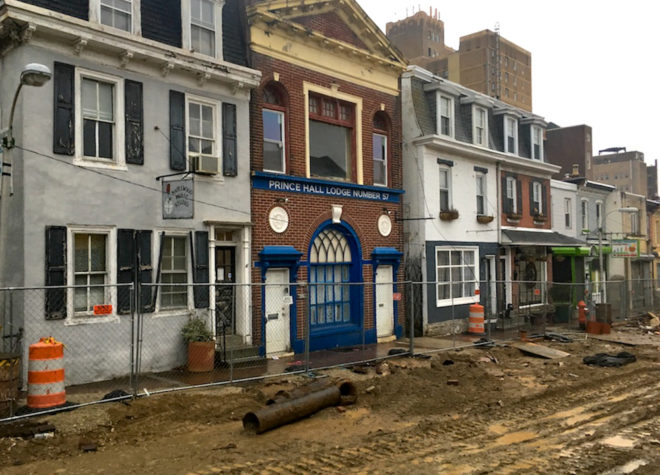 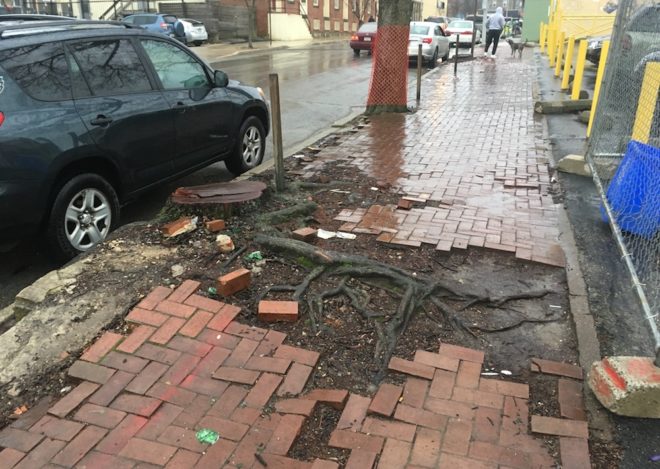 Maplewood Mall under construction in March 2019. The removal of the original trees and bricks was necessary in part because the trees roots caused severe damage to bricks around the mall. | Photos: Sam Newhouse

In late 2019, news began spreading around Germantown that the lumpy-but-lovable brick path down Maplewood Mall had been removed and that the central willow tree shading the pedestrian mall was being cut down. The main road was fenced off for construction while local businesses along the mall stayed open.

Miles Butler, co-owner of Germantown Espresso Bar on the Mall, described being slightly traumatized when he saw the willow tree outside being chopped to pieces. He spontaneously rushed outside and asked workers to chainsaw off a few chunks which are now in use as makeshift seating up and down the mall.

The planned tree removal and upgrade of this little commercial block that most people outside of Northwest Philly don’t even know exists has been public knowledge since 2013. Yet many neighbors were still surprised when work began in November 2019 and saddened to see the trees and familiar old pavers removed.

One year later, despite businesses and everyday life being upended by COVID-19, Germantown now has a brand new and beautifully refurbished Maplewood Mall to enjoy. At a community meeting about the project back in February, Philadelphia city planner Matt Wysong addressed residents’ concerns, most of which were about parking, trash pick-up, and the removal of the block’s beloved trees. Wysong told attendees at the time that the trees on the mall, mostly American lindens and the large beloved willow tree, were species with wide-spreading root systems that had damaged the pavers, leading to multiple trip-and-fall lawsuits over the years and were threatening subsurface utilities.

“The weeping willow in the middle of the street was really just this calming presence right there. It was a cool place. I’ve been there many times on a summer evening,” Wysong said. But he said the mall’s new design, by national building and development site design firm WRA with landscape architecture by Ground Reconsidered, will replace all of the trees and add hundreds of plants and shrubs, while being easier to maintain. The $3.3 million project was funded through the City’s capital budget.

“When this is done the mall will be one of the nicest streets in the city. The city’s goal is to rebuild the mall as a great neighborhood public space and shopping street that will help the overall improvement of the Central Germantown business district,” said Wysong. “In the wake of the global pandemic and recent social unrest this project also presents an opportunity to address the need for a safe and enjoyable outdoor space for all residents of Germantown and visitors from surrounding neighborhoods.”

One of Germantown’s Best-Kept Secrets 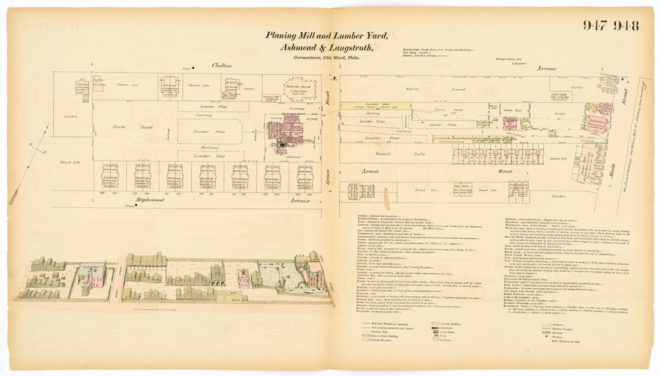 The land where Maplewood Mall sits is the former site of Ashmead & Langstroth’s planing mill and lumber yard, seen above as surveyed in October 1875. | Image courtesy of Map Collection, Free Library of Philadelphia

Maplewood Mall is in some ways an urbanist’s dream. It is a quiet, pedestrian-only nook of local businesses and apartments, mostly unknown to outsiders. Just a block from Germantown and Chelten Avenues, the mall has key benefits those busy commercial corridors lack: walkability and an absence of chain stores. But it also lacks significant visibility and is by no means a thriving hub of activity.

In the 19th century the land where Maplewood Mall now sits was occupied by the planing mill and lumberyard of Ashmead & Langstroth, with a cartway where pedestrians now enter the mall, according to archival land surveys. 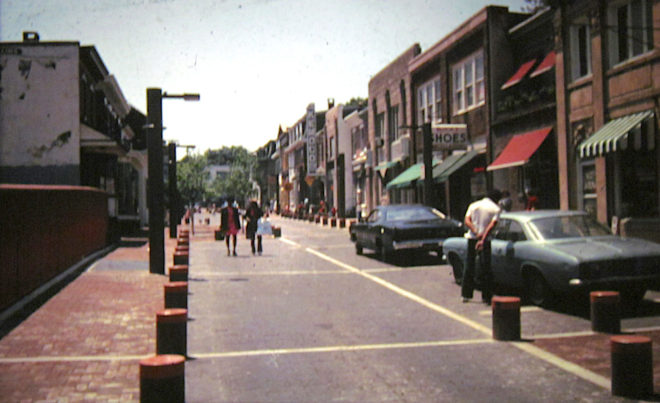 Maplewood Mall after its completion in the mid-1970s. | Image courtesy of the Philadelphia Redevelopment Authority

By Germantown’s heyday as a “city within a city” in the 1960s, the street was a commercial district and plans materialized to convert it into a pedestrian mall. At the time there were several project proposals for the neighborhood, the most infamous of which was a multi-lane bypass down Rittenhouse Street which would have cut the neighborhood in half. That plan was blocked by community organizing, but the mall did get built by the Philadelphia Redevelopment Authority in the 1970s. “It was one of the vestiges of the failed urban renewal plans that spanned many conflicts over planning from 1946 to 1976,” said Dr. David Young, author of The Battles of Germantown. “Once the bypass failed finally in 1972, funds still had to be spent and Maplewood Mall was considered another in a long line of  ‘sparks for Germantown’s renewal’ that seem to come every decade and not really pan out.”

Germantown old-timers fondly remember the old businesses that were once on the mall. Shoe stores, bookstores, hair salons, flower stores, a kite shop. Today there are more apartments than shops, but the area is still a great one to visit. The Maplewood Nutrition Shop has a steady flow of regular customers. Also in business there is the Espresso Bar, G-Town Radio’s studio, and the Flower Cafe at Linda’s. Books & Stuff, an Afrocentric and multicultural children’s bookstore, recently closed its physical location, but is still operating online. The mall also has uncommon businesses like Cane and Rush, a chair-caning store owned by Nicholas Thaete which has been there for the last 12 years. “I’m in full agreement with it,” Thaete said of the upgrade. “When they first started doing the mall, people were protesting. But I’m looking forward to it. It had to be done.” 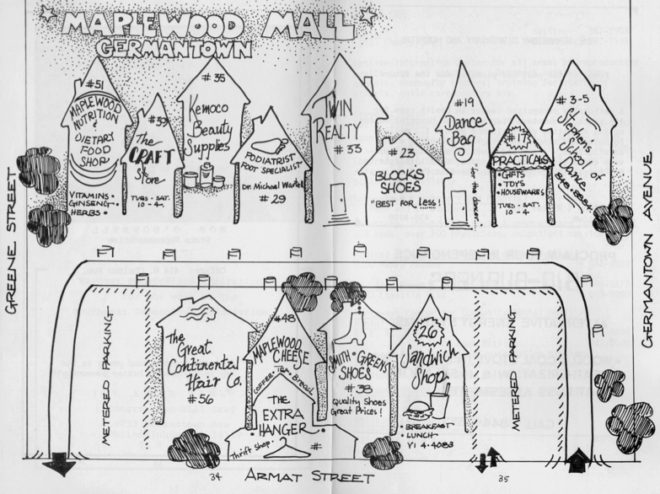 A 1978 map of Maplewood Mall businesses. | Image courtesy of the Philadelphia Redevelopment Authority

Al Ciment is the owner of the Maplewood Nutrition shop, which opened before the pedestrian mall was developed. Ciment remembered the mall after its first big renovation as a buzzing community gathering spot. “In its heyday, it was great,” Ciment recalled. “People used to hang out, read poetry. It was pretty happening in the ’70s. Toward the mid-1980s it pretty much started to deteriorate as far as the infrastructure. Stores closed. Parking’s always been a problem in Germantown. But for the most part, the mall always did succeed.”

Some gripes about the project circulated around the neighborhood when construction first started, both about the trees and about the pavers being remove, which resembled Germantown Avenue’s historic cobblestone, but were actually asphalt pavers dating back to the 1970s. 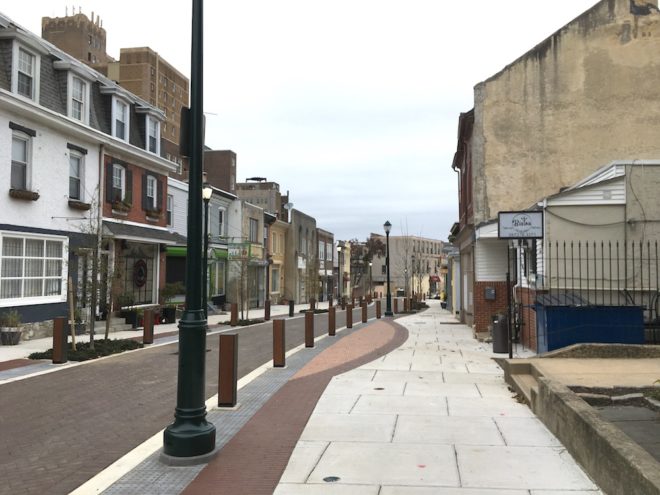 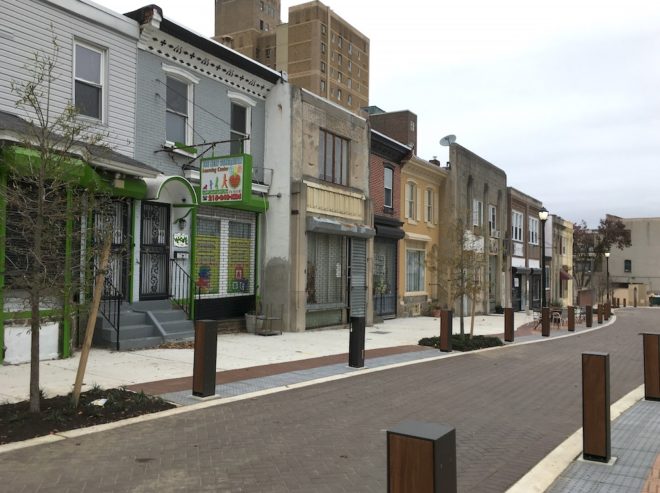 “People that that live, work, and own on the mall, we’re happy with what’s being done. The facelift is something that should have been done 15 years ago,” Ciment said. “We’ve been here 56 years. I welcome the change. The area deserves a shot in the arm. What it was back when it opened, it will never be that again.”

The new Maplewood Mall will have one major change: cars will now be allowed on weekdays, a decision based on the intention to bring more people and increase economic activity. The mall has been closed to traffic almost every weekend since it reopened. Starting in the spring of 2021 the City wants to explore the possibility of extending those closures with mall businesses, residents, and Germantown United CDC. In October, the City’s Percent for Art Program and the Office of Arts, Culture and the Creative Economy released a call for artists for a public art project to adorn the mall. The deadline for submissions is December 21, 2020. 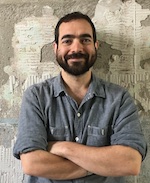