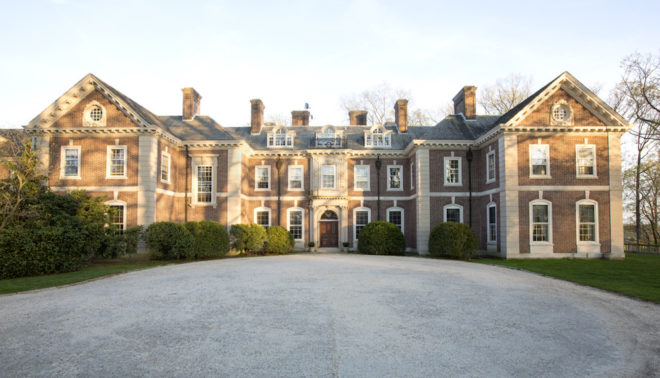 In 1911, when Horace Trumbauer was commissioned to design Ardrossan, a 50-room Georgian Revival manor house in Villanova, his work was already considered the epitome of Gilded Age architecture. He had designed Lynnewood Hall for Peter A. B. Widener and opulent mansions for the Elkins family up and down the East Coast. The one thing Trumbauer never planned to design was a movie set. Yet, that is what happened.

In 1939, the social whirl at Ardrossan inspired a Broadway play, The Philadelphia Story, then a film of the same name the following year starring Katherine Hepburn and Jimmy Stewart. The movie was not actually shot on location because Hollywood executives deemed it too unbelievable, but audiences were so entranced by the story of Main Line socialites that it was adapted as a musical in 1956 featuring Grace Kelly.

But about that mansion. In the 1870s, Col. Robert L. Montgomery, founder of the investment firm Janney Montgomery Scott, acquired nearly 800 acres of rolling farmland on the Main Line which he named Ardrossan Farms after his family’s ancestral home in Scotland. This was the era of so-called “Main Line Gothic Castles,” each trying to outdo the next. However, Montgomery did not go for the moody faux fortresses of his peers. Instead, he hired Trumbauer to design an elegant English country manor house for himself and his wife Charlotte. 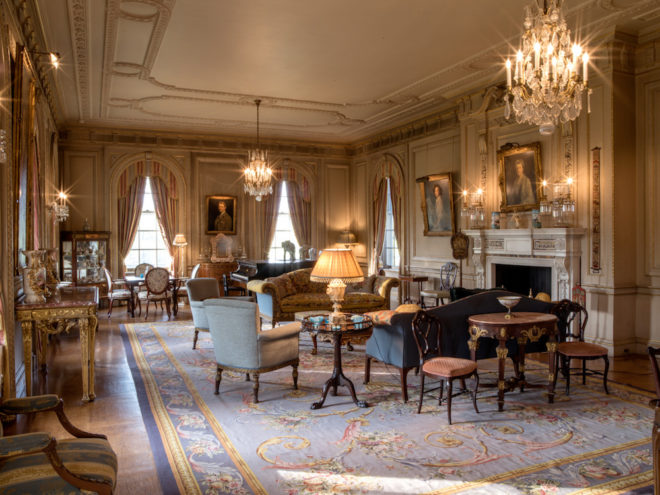 A view inside the well-preserved opulence of Ardrossan. | Photo: Steven Gunther

Anyone entering the mansion would have sworn that they were in England, perhaps even Downton Abbey. The furniture was designed by White, Allom & Company which worked on Buckingham Palace. The walls were covered in paintings by Thomas Sully, Charles Willson Peale, and Gilbert Stuart. Guests dined sumptuously and rode to the hounds.

However, Ardrossan had a split personality. In addition to being a dazzling mansion, it was a working dairy farm. Even Montgomery’s daughter, Hope, who was the inspiration for Katherine Hepburn’s character Tracey Lord, worked as hard in the dairy as she did on her social life. According to lore, she was proposed to by four men the night of her debut in 1922. The following year she married Edgar Scott, heir to the Philadelphia Railroad fortune. They became the symbol of Main Line Society during the Roaring Twenties and Prohibition. Vanity Fair dubbed her the “unofficial queen of Philadelphia’s Wasp oligarchy.”

While playwright Phillip Barry took liberties translating Hope Montgomery Scott’s actual life into the madcap Tracey Lord, Barry knew his subject up close and personal. He was a frequent visitor at Ardrossan and was a shrewd observer of its social life. After the success of his play, Katherine Hepburn became a houseguest there as well. Her clenched-jawed Bryn Mawr accent fit in perfectly with the Anglophiles who dined and danced under the crystal chandeliers of Ardrossan. 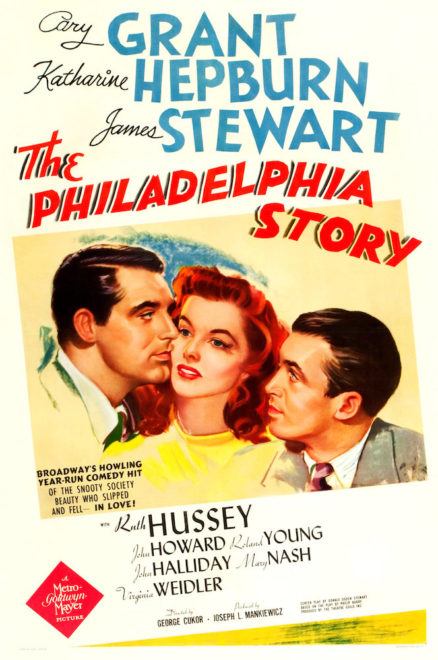 A movie poster for the 1940 film The Philadelphia Story. | Image: IMDb

“I saw both movies, Philadelphia Story and High Society, and I loved them,” said Joanie Mackie, granddaughter of the home’s original owners. “Hope loved to tell dirty jokes. But she also enjoyed working in the dairy and she was a tremendous equestrian.” Mackie’s favorite room in the mansion? “I love the library, my grandmother’s sitting room. She did her needlepoint there. On Mondays at 4 P.M. anyone could come for tea. That was family time. Plus, there were Sunday night supper with guests.”

This is the kind of grand estate that not only inspired a play and two movies, but also a book. Historian David Nelson Wren spent 20 years documenting Ardrossan Farms in Ardrossan: The Last Great Estate on the Philadelphia Main Line, published by Bauer and Dean Publishers in 2017. “It’s the best-preserved of the great Main Line ancestral manses,” Wren said in a 2018 Inquirer article. 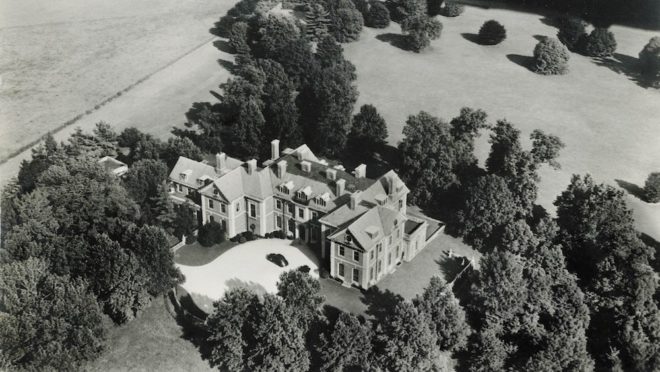 An aerial view of Ardrossan. Date unknown. | Photo from Ardrossan: The Last Great Estate of the Philadelphia Main Line, Bauer and Dean Publishers

Mackie lives in a house on the estate, while several of her cousins live in the main house. As for the décor, it has been unchanged since 1970. When a chair needs to be reupholstered, authentic period fabric is used. The original acreage was accumulated by Mackie’s grandparents, parcel by parcel, buying up local farms and homes. Now the process has reversed itself. 160 acres have become part of the Radnor Township Park System. Nearly 300 more acres are under conservation easements. The estate is selling one and a half acre lots on which buyers may use the builder and architect of their choice. “We have now sold off all the land and kept the house with ten acres, surrounded by conservancy,” said Mackie.

The natural beauty of Ardrossan Farms will never be destroyed by development thanks to the family’s partnering with Radnor Township. Eddie Scott, a family member, is handling the development of the property with all lots priced at $1.5 million. There are still Black Angus cattle grazing in the meadows and old growth trees providing shade. And on moonlit nights you may just catch a glimpse of the Montgomery Scotts partying like its 1929.