161-Year-Old Victorian House Museum Ahead of the Virtual Curve 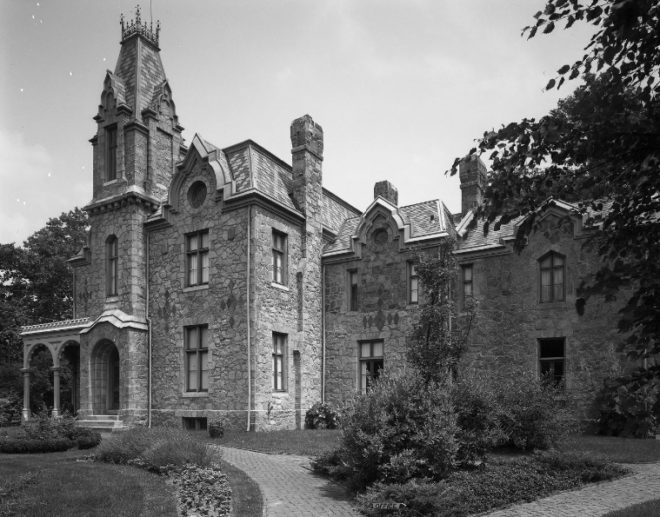 Ebenezer Maxwell Mansion in Germantown was built in 1859. The 161-year-old house museum was an early adopter of virtual events and online tours after the pandemic forced all non-essential businesses to lock down in the spring. | Image courtesy of The Athenaeum of Philadelphia

When the COVID-19 pandemic closed the doors of the Ebenezer Maxwell Mansion at Tulpehocken and Green Streets in West Germantown last March its dedicated staff had to rethink their popular series of events. How could they safely continue tour operations and showcase Victorian architecture, design, history, and culture?

“We had just celebrated the opening night of Deep Rivers, a theatrical performance highlighting achievements of Philadelphia’s Black entrepreneurs, intellectuals, and artisans,” said Diane Richardson, executive director of the museum. “Within three days, the City declared a state of emergency and we had to shut down.” Richardson and her staff swiftly sprang into action, transforming a wide range of live events into virtual offerings.

Tenea Wilborn, a docent at the mansion and a member of Grounded Theater Company, now appears in the virtual Zoom version of Deep Rivers, dressed in Victorian regalia, with fellow docent John Brown. Wilborn introduces viewers to exceptional Black women from Philadelphia history. “My favorite is Dr. Eliza Ann Grier,” she said. “A native of North Carolina, Dr. Grier attended Women’s Medical College here. In order to pay her tuition she returned to the South every summer to pick cotton. She became the first Black woman to receive a medical license in Georgia.”

Zoom is an ideal medium for the museum’s Literary Parlor. “People would be surprised to know that Victorian literature is fun. It’s not meant to be dry or dull,” said Kate Howe, book club leader. Upcoming books for 2021 include Adame Bede, The Scarlet Letter, The Tenant of Wildfell Hall, and In a Glass Darkly.

Who wants a slice of virtual cake? Becky Diamond, author of Mrs. Goodfellow: The Story of American’s First Cooking School, usually does holiday cooking demos at the mansion. This December she will share Victorian recipes via Zoom. “I will be making sponge cake and chicken croquettes adapted from recipes of John Trower, an African American who was the most successful caterer of his day,” said Diamond. “There is so much history we can learn through food and vice versa.”

Because of the pandemic, Santa will not be available to meet with kids in-person at the museum this year. But families may schedule a 15-minute time slot to share their wish list with Santa on Zoom starting Saturday, December 5th. Milk and cookies are optional.

The irony of Ebenezer Maxwell Mansion, a veritable Victorian artifact, quickly adapting its programs to an online audience isn’t as incredible as the fact that the mansion still stands. Twice it almost fell to the wrecking ball if it wasn’t for the preservation efforts of the Germantown Historical Society.

Built in 1859 by Ebenezer Maxwell, a wealthy cloth merchant, its architecture has been attributed to Joseph C. Hoxie, who designed the Second Presbyterian Church of Germantown, directly across from the mansion. Others attribute the home to architect Samuel Sloan, a prolific author of architectural books, known for Italianate houses. Comparing both architects’ styles, I lean toward Hoxie. 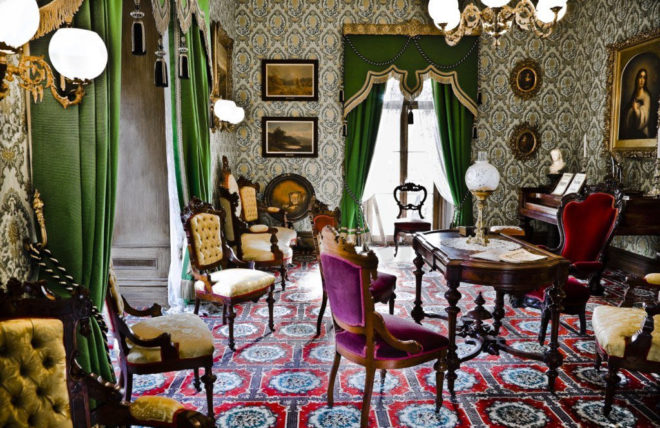 The mansion is a two-and-a-half story building constructed of Wissahickon schist with a three-story tower, topped with a mansard slate roof. Its three porches and four stone chimneys give it a quaint, storybook quality. It is a wonder the mansion bears Maxwell’s name. He and his wife only lived in it for three years. As it turns out, Maxell had the lavish house built for the purpose of selling it at a profit and building a more modest house next door which no longer stands.

The next owner, William Hunter, a partner in a clothing store, struck it rich in the coal business then died of a bad decision. He stood on a rocking chair and took an accidental tumble out of a hotel window in New York City. His window remarried and had one daughter, Gussie, who lived in the house until 1956.

While the subsequent years are vague, we know that in the early 1960s the mansion was threatened by the prospect of replacing it with a gas station. Another developer wanted to tear down the home completely. In both cases the community protested. In 1965, the Germantown Historical Society restored the mansion, opened it as a museum, and in 1971 it was added to the National Register of Historical Places as part of the Tulpehocken Station Historic District. But that was not the end of the drama. For a while the mansion was used as an annex by the neighboring nursing home owned by the United Universalist Church.

For its interior restoration, the first floor reflects the 1860 period when the Maxwells lived there, while the second floor echoes 1880, the years following Philadelphia’s Centennial celebration. Equally fascinating are the mansion’s collections of Victorian memorabilia, including a pair of cream-colored satin shoes worn at a 1912 wedding. If you are a fan of Edith Wharton novels or Merchant Ivory films the ornate décor of the Ebenezer Maxwell Mansion will not disappoint. From the hand-painted wallpaper to the faux-finished mantlepieces and authentic 1865 square grand piano of Brazilian rosewood, the mansion is a time traveler’s delight. In its current virtual tour, live docents escort you through the house and answer your questions. Feel free to ask if the butler did it with the candlestick in the library.

For information about virtual programming and events visit the museum’s website: EbenezerMaxwellMansion.org