When Philadelphia Became a Center of Medicine

One reason why Philadelphia enjoys its world wide reputation as a center of medical education and practice can be traced back to the Civil War. Patriotic physicians gained their knowledge and honed their skills treating the 157,000 soldiers and sailors who were cared for in the city’s hospitals. Artist and historian Frank H. Taylor would later claim in his 1913 book Philadelphia in the Civil War that the city’s medical reputation was already well established by then as a result of this wartime experience.

When the Civil War began, its opposing sides assumed that the war would be of short duration until certain victory was achieved, a misperception common to armed conflicts. Philadelphia, astride the Union’s main railroad corridor leading southward to the Virginia battlefields, soon found its civilian hospitals overwhelmed with injured men–soldiers who had recently boarded the railcars of the Philadelphia, Wilmington and Baltimore Railroad at its Southern and Western Station, Broad and Prime Streets (Washington Avenue, today) to the loud cheers and stirring martial music sending them off to war. This war would ultimately claim 600,000 lives, with 30 percent of Union casualties attributable to battle injuries. 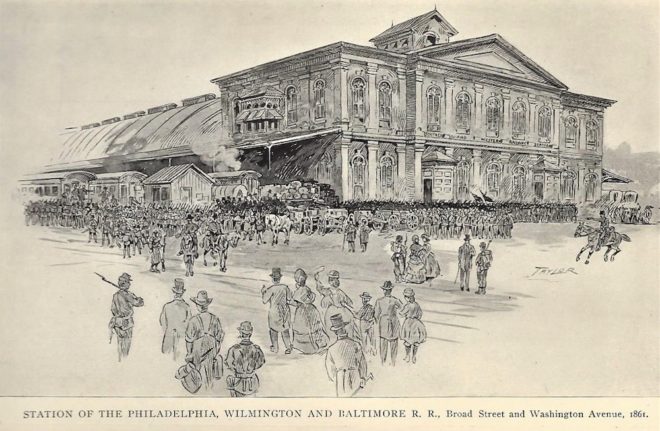 Drawing by Frank Taylor of the Southern & Western Station of the Philadelphia, Wilmington and Baltimore Railroad at Broad and Prime Streets (Washington Avenue). | Image: Philadelphia in the Civil War, Frank Taylor, 1913

In April 1861, the U.S. Army Medical Corps consisted of an octogenarian surgeon general, 30 surgeons and 83 assistant surgeons, 27 of whom immediately resigned to “go South,” thus leaving the Corps with only 87 physicians. By the war’s end, over 11,000 doctors had served or were serving the Union Army, the great majority in general hospitals away from the front lines.

The horror stories of casualty abuse and neglect in the recent Crimean War and the example of Britain’s Florence Nightingale in alleviating their suffering galvanized a group of New York women to form the U.S. Sanitary Commission, which generated private funds to outfit hospital trains and ships and provide supplies to the patients. Soon a branch of the Sanitary Commission was operating in Philadelphia.

The federal government responded to the crush of arriving casualties in Philadelphia by creating 24 new Army hospitals here in existing buildings adapted for this purpose. These hospitals were also overwhelmed, leading the Army to create the mammouth West Philadelphia U.S. General Hospital, also known as Satterlee U.S. Government Hospital, named for the Medical Corps’ chief purchasing officer Brigadier General Richard Sherwood Satterlee, in June, 1862. Construction was overseen by Dr. Isaac I. Hayes who remained at the head of its administration for the entire war. At the beginning of the war he was off leading an expedition in the Arctic and learned of the conflict only on arriving in Halifax in October 1861. He promptly abandoned his scientific plans and tendered his personal services and the use of his ship to the federal government. 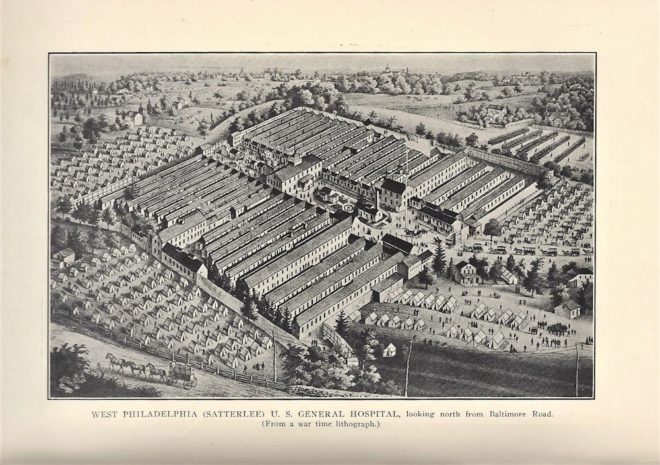 Oblique drawing of Satterlee Hospital. View is toward the Northwest from 43rd Street and Baltimore Avenue. | Image: Philadelphia in the Civil War, Frank Taylor, 1913

Originally designed with 2,860 beds, Satterlee was at its opening the largest hospital in the United States and was expanded with the addition of tents on the grounds to as many as 6,000 beds. Over the course of the war it treated over 20,000 casualties. It was located on 15 acres extending from 42nd Street and Baltimore Avenue to 45th and Pine Streets, including a portion of what is now Clark Park. A stone from the Gettysburg battlefield was placed in the park in 1916 to commemorate its hospital history. Joseph Leidy, a physician of many interests, was a surgeon at Satterlee. His name is closely associated with the University of Pennsylvania’s School of Medicine, Philadelphia’s Academy of Natural Sciences, and the Wagner Free School of Science. 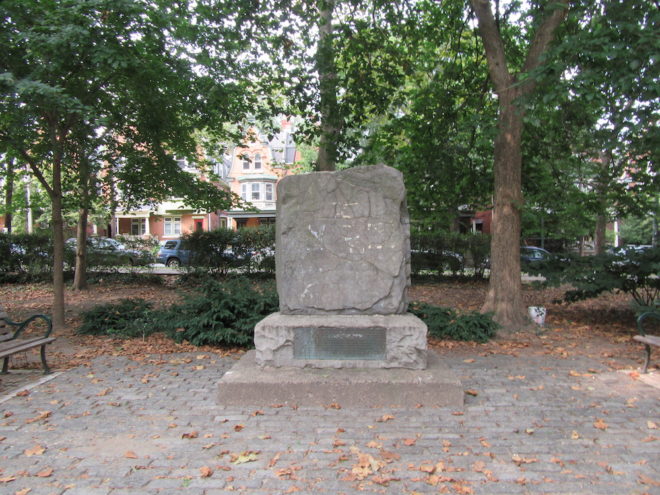 The Gettysburg Stone in Clark Park was placed in honor of Satterlee U.S. Army Hospital which stood on the site. The stone is from the hill Devil’s Den on the Gettysburg battlefield. The inscription reads, “This stone from the battlefield of Gettysburg is placed by citizens of the neighborhood in the year 1915 to mark the nearby site of the West Philadelphia General Hospital of the United States Army— later designated the Satterlee General Hospital in honor of Brigadier-General Richard Smith Satterlee, U.S.A. A noted surgeon— and also to commemorate the services of the patriotic men and women who as volunteer physicians, nurses and co-workers under General Isaac I. Hayes, Surgeon in Chief, here ministered from June 9, 1862 to August 3, 1865 to more than twenty thousand sick and wounded soldiers of the Civil War.” | Photo: Ed Duffy

Most of the injured were transported from the Southern battlefields to Satterlee aboard the hospital ships Commodore and Whilldin, which was staffed with 10 surgeons. Nurses aboard these ships were provided by the Order of the Sisters of Saint Joseph from Saint Joseph’s Hospital on Girard Avenue. The ships docked near what is now the Gray’s Ferry Avenue Bridge, from where ambulances transported the patients to Satterlee. The nursing staff of Satterlee was provided by 42 members of the Sisters of Charity of Saint Vincent de Paul led by a woman of singular capacity and strength of character, Mother Mary Gonzaga Grace, remembered by veterans as Philadelphia’s Florence Nightingale. The Ladies’ Aid Society, Penn Relief Association, and Ladies’ Association for Soldiers’ Relief were all represented in large numbers of volunteer attendants at this and other hospitals. The Philadelphia Nurses’ Corps, the first association of Army nurses in service, was formed at Satterlee.

The opening of Satterlee resulted in the closures of some of the other smaller Army hospitals. After the 4,000 bed Mower U.S. General Hospital opened in January 1863 in Chestnut Hill the number of other Army hospitals in Philadelphia was reduced to 13. The Army also created its own pharmacy, the U.S. Army Laboratory, in a factory building at 6th and Jefferson Streets, where a staff of chemists and other experts prepared supplies for the medical and surgical requirements of the Army and Navy.

Among these 13 smaller hospitals were the Citizens Volunteer Hospital located at the northeast corner of Broad and Prime Streets across from the Southern and Western railroad station. This hospital, with 400 beds, performed a clearinghouse function examining the condition of the wounded arriving on specially designed Sanitary Commission hospital railcars and distributing them to the other hospitals. After major battles the nearby churches would be drafted into service to house excess arrivals. In its first year of operation it treated 30,000 patients of whom only 80 died, a mortality rate of a third of a percent. However, it is also reported that in the course of six months dating from July 1, 1864, Philadelphia military hospitals received 46,459 injured and sick casualties, of whom 974 (2.1 percent) died, so the mortality rate was somewhere between 0.3 percent and 2.1 percent. It must be noted, however, that the casualties that were admitted to Philadelphia hospitals had gotten their berths on the hospital trains and ships after having undergone a battlefield surgeon’s triage examination determining that they were likely to recover or at least survive. Many casualties were not as lucky. 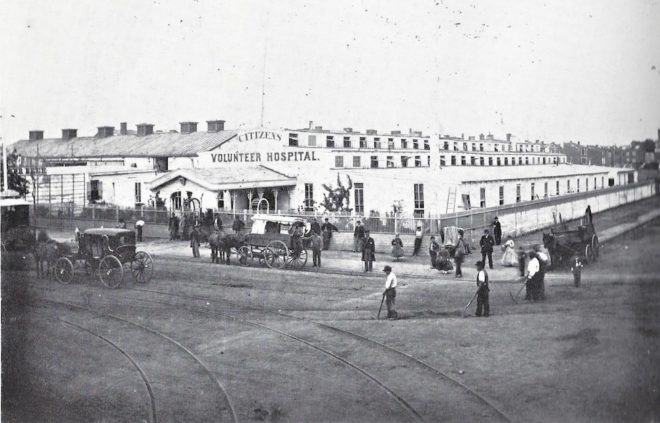 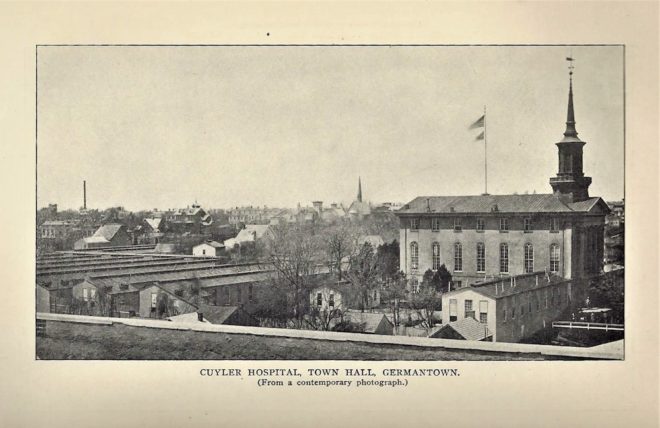 Cuyler Hospital. The town hall depicted is the old one, located approximately on the parking lot of where the 14th Police District headquarters is today. | Image: Philadelphia in the Civil War, Frank Taylor, 1913

Fifth Street Hospital at 5th and Buttonwood Streets had 282 beds and was located in a four-story former carriage factory at Union Square. After its hospital use was discontinued in February 1863 it became a jail for confining Confederate prisoners of war. 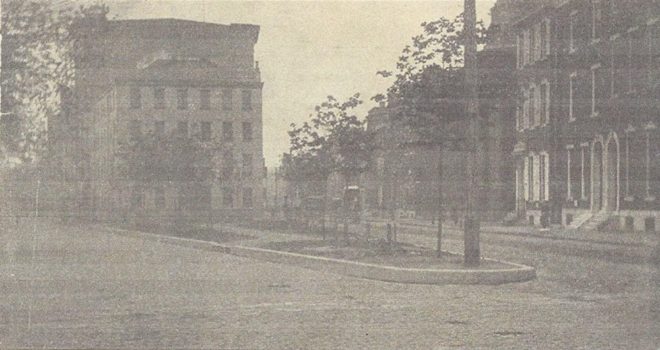 Fifth Street Hospital is the four story building in left center. Union Square is in foreground. | Image courtesy of the Free Library of Philadelphia.

Broad Street Hospital, with 650 beds, at Cherry Street was located in a former Philadelphia and Reading Railroad station. It is noteworthy for its nursing staff led by neighborhood volunteer Elizabeth Duane Gillespie who played a central role in planning and executing Philadelphia’s 1864 Great Sanitary Fair at Logan Square and afterward fundraising for the 1876 Centennial Exhibition where she also created the Women’s Pavilion. This hospital was closed after Mower opened but returned to service after the Battle of Gettysburg.

Summit House Hospital, 522 beds, located on Darby Road at 70th Street and Woodland Avenue was dedicated to the treatment of the Army’s African American soldiers, known at that time as United States Colored Troops (USCT).

Turner’s Lane General Hospital, with 275 beds, at 22nd and Oxford Streets can be described as the birthplace of medical neurology, pioneered by its surgeons William Williams Keen, Jr. and doctor-novelist-poet Silas Weir Mitchell, who co-authored the 1864 treatise Gun Shot Wounds and other Injuries of Nerves. Dr. Keen was the first American surgeon to successfully remove a primary brain tumor and served as surgeon and consultant to six American presidents from Grover Cleveland to Franklin D. Roosevelt. S. Weir Mitchell, M.D., the father of medical neurology, was known as “Doctor Quiet and Doctor Diet” for his regimen of isolation, bed rest, dieting, electrotherapy, and massage as treatment for psychiatric illnesses. Mitchell’s Disease aka erythromelagia bears his name. Dr. Mitchell had earlier been assigned to the Filbert Street Hospital, 430 beds, located in the 16th Street Armory. His first novel, In War Time, is set in this hospital. 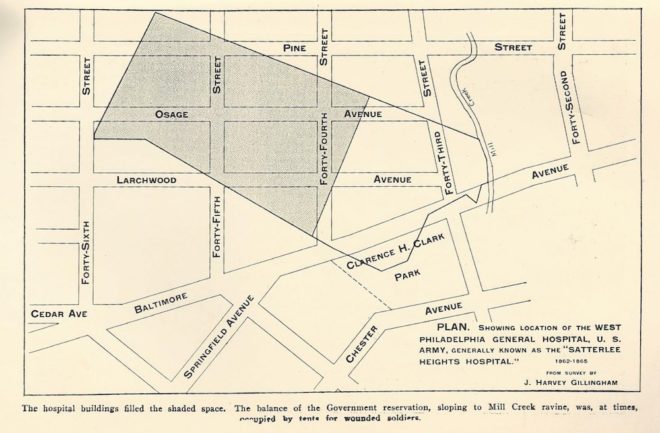 A lithograph depicting Satterlee Hospital and the hospital’s plan imposed on the city’s street grid. | Images: Philadelphia in the Civil War, Frank Taylor, 1913

Philadelphia doctors also treated wounded Confederates, of whom 184 did not survive and are buried in Philadelphia’s National Cemetery. Applying the aforementioned mortality rate of 2.1 percent indicates that approximately 8,800 Confederate soldiers and sailors may have been patients in Philadelphia.

Patients who died in hospital were initially buried on the hospital grounds, but this soon became impractical. The federal government then purchased blocks of burial plots in local cemeteries for the soldiers whose remains had not been reclaimed by their families. In Philadelphia these cemeteries were Mount Moriah, Glenwood, and Odd Fellows. With North Philadelphia’s rapid growth after the war development pressure was exerted on Glenwood and Odd Fellows, near the current Amtrak North Philadelphia Station. The federal government purchased a 13-acre tract of land in the rural Philadelphia village of Pittville, Limekiln Pike, and Haines Street, creating a national cemetery there, to which the remains, both Union and Confederate, were relocated. Civil War dead were not relocated from Mount Moriah, which remains their final resting place. The military plot there is owned by the Department of Veterans Affairs.

After the war a developers syndicate led by financier Clarence H. Clark, Sr., acquired the grounds of Satterlee, platted its streets and building lots, and marketed it as Satterlee Heights. The Hospital’s Sheridan and Fairview Streets became Osage and Larchwood Avenues. It remains one of Philadelphia’s more attractive and desirable neighborhoods. Many of the area’s residents are employed in the nearby Civic Center Boulevard canyon of hospitals, laboratories, and educational institutions, a legacy of Philadelphia’s wartime medical experience.