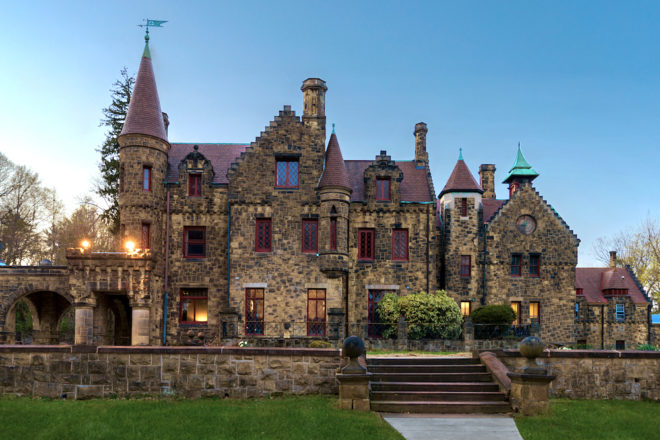 Maybrook Mansion was built in the late 1800s and designed by Watson Hewitt and William D. Hewitt to look and feel like a Scottish castle.| Image courtesy of Jefferson Apartment Group

Wynnewood is associated with nice homes, shopping centers, and good schools. Not castles. That’s because Maybrook, the last remaining grand estate in Wynnewood, has been shrouded in litigation, intrigue, and dense woodlands for decades.

Although it is located just behind the Wynnewood Train Station, the only glimpse area residents could get of the castle was its rose-colored turrets peeking above the tree line. Growing up walking distance from Maybrook, I never dared to venture down the narrow path leading from the station to the castle.

Amazingly, when I was 19-years-old, my boyfriend invited me to have dinner at Maybrook. I’m not sure what shocked me more. That my boyfriend’s uncle and aunt, John and Ruth Merriam, lived in the castle or that I was finally going to see what was inside. I was excited and terrified. However, the Merriams quickly put me at ease. John was a real estate developer, art collector, and philanthropist. Ruth was passionately involved with art restoration. The décor conjured up Mary Queen of Scots or the Adams Family, depending on your feelings about medieval architecture and 19th century décor. 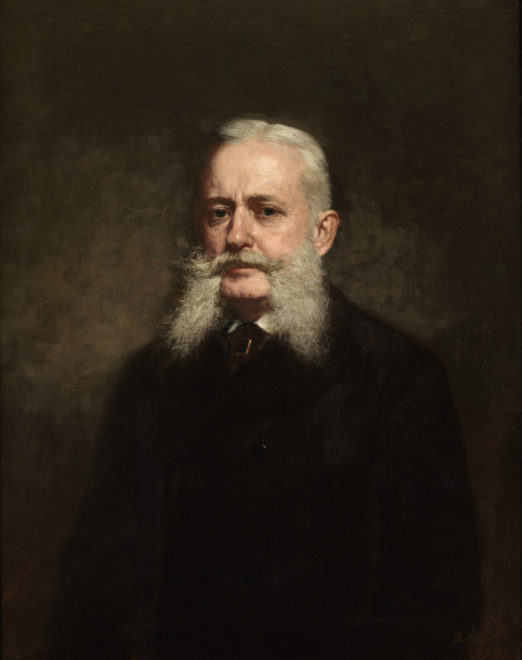 A portrait of Henry C. Gibson painted by artist Bernhard Uhle in 1891. | Image courtesy of the Pennsylvania Academy of Fine Art

My visit, however, did not answer lingering question. What was a castle doing in Wynnewood? For that, we need to go back to when Lower Merion Township was rolling farmland.

In 1857, the Pennsylvania Railroad connected Philadelphia to Bryn Mawr and points west running parallel to Lancaster Avenue. That motivated wealthy Philadelphians to buy land and hire famous architects to design “Main Line Gothic” castle-like mansions as summer retreats. While most Main Line castles have since gone the way of the bulldozer, Maybrook remained intact due to a unique set of circumstances and characters that almost rival Downton Abbey.

It started in 1881, when liquor baron and business magnate Henry C. Gibson purchased 67 acres of Wynnewood farmland from a Welsh Quaker. Gibson hired George Watson Hewitt and William D. Hewitt to duplicate a medieval Scottish castle. The name Maybrook combined the first name of Gibson’s daughter with a brook that ran through the estate. 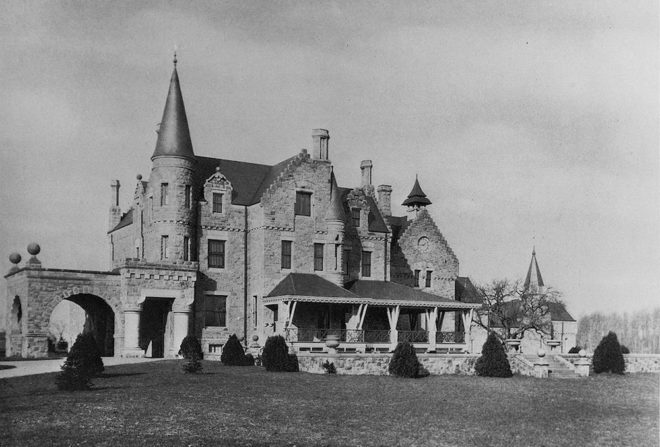 Stonemasons were brought from England to lend authenticity to the 35-room, 20,000-square-foot Gothic mansion with a 72-foot tower. Gibson planted a veritable forest of majestic oak, maple, and pine trees to shield his estate from public view. The grounds included fountains, ornamental gardens, a duck pond, a gatehouse, stables, and a barn.

When Gibson died in 1891, his 22-year-old daughter Mary “May” Gibson hired George Watson and William D. Hewitt to design a two-story, 50-foot high ballroom with ornately carved stone pillars, arched windows, and vaulted cathedral ceilings. When May wanted music, she hired the Philadelphia Orchestra. She also added a library, a greenhouse, a carriage house, and commissioned Violet Oakley to design stained glass windows.

In 1950, May sold 10 acres of Maybrook to Merriam who built the 220-unit Thomas Wynne Apartments on the southeastern border of the property. Six years later, May sold the remainder of the estate to Merriam who lived in the mansion with his wife for over 30 years. 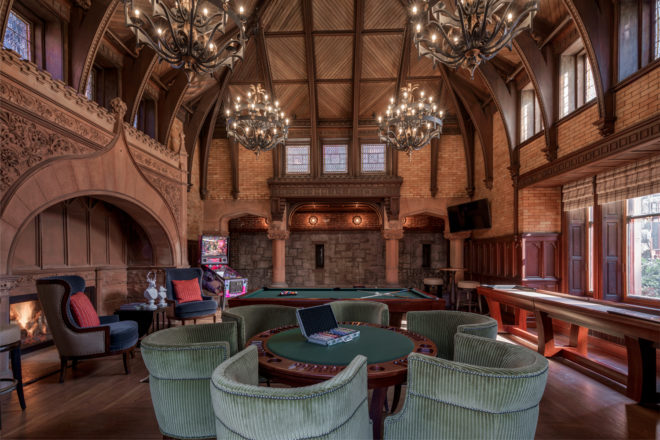 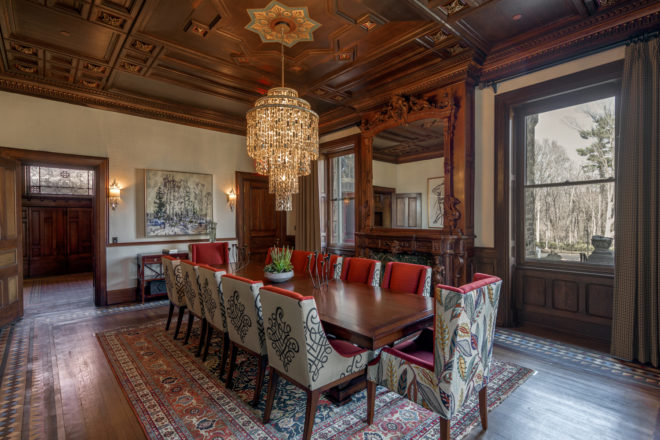 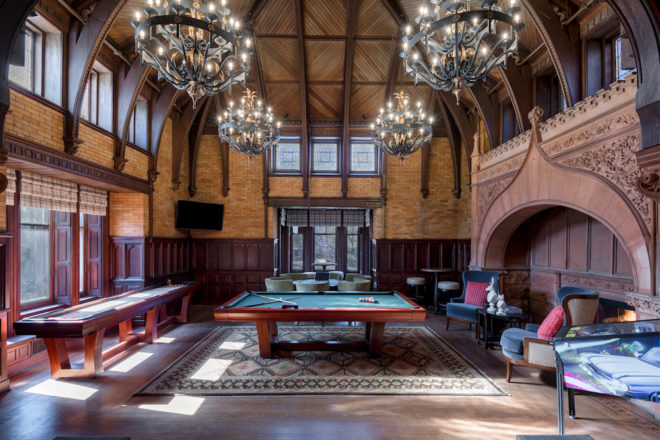 When Merriam’s wife died, he married his secretary Betty Lockyer. Two years later, Merriam passed away leaving his $95 million estate to Lockyer. Before her death in 2000, Lockyer transferred everything to her son by a previous marriage, Robert Lockyer. Head of Merloc Development, he envisioned turning the estate into The Reserve at Maybrook, a luxury apartment complex with the castle as its centerpiece.

For over a decade, Robert Lockyer’s vision was mired in legal battles that went all the way up to the Pennsylvania Supreme Court. Here is where we get into the legal weeds. While Maybrook is technically located in Wynnewood, within Lower Merion Township, its eastern border along North Wynnewood Road is adjacent to the independent Borough of Narberth. Narberth residents put up a fight. Their concern? They did not want a dramatic increase in traffic spilling into their sleepy borough.

In 2006, suburban real estate developers Toll Brothers bought the development rights of The Reserve at Maybrook from Lockyer. Just when Lower Merion Township was about to celebrate its new tax base, Narberth played hard ball again. Residents were appalled at Toll Brother’s plan. Then came the housing market crash of 2008. All bets were off. 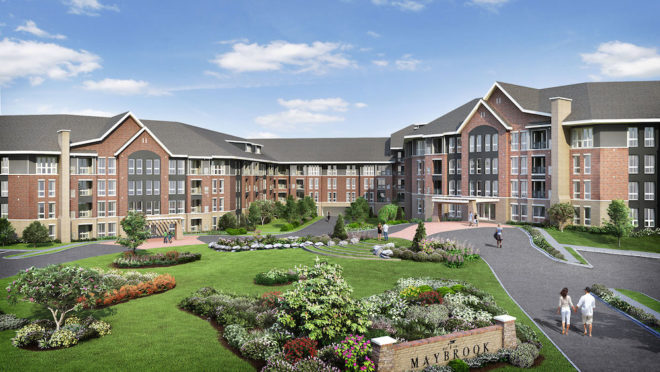 By 2016, Toll Brothers was out of the picture and Haverford Properties entered into an agreement with Lockyer. “He sold us 34 acres, which included the mansion, stable, and carriage house,” said Charlie Houder, president and founder of Haverford Properties.

Haverford Properties, in partnership with Virginia-based Jefferson Apartment Group, presented their plan for a 250-unit luxury apartment complex designed by KTGY Architects. Lower Merion Township approved and Narberth got its wish. The entrance to the complex is on Penn Road in Wynnewood and Narberth received a new traffic light to ease congestion.

In 2018, the Reserve at Maybrook opened with a two-story fitness center, resort-style pool, and a 139 year-old castle. “Residents have access to the castle’s renovated game room and parlor, and may also reserve use of its dining room,” said Houder, “On the upper floors, we are creating office space for the use of residents. When the ballroom is renovated, it will be available for rent on a limited basis.” Do I hear a waltz?