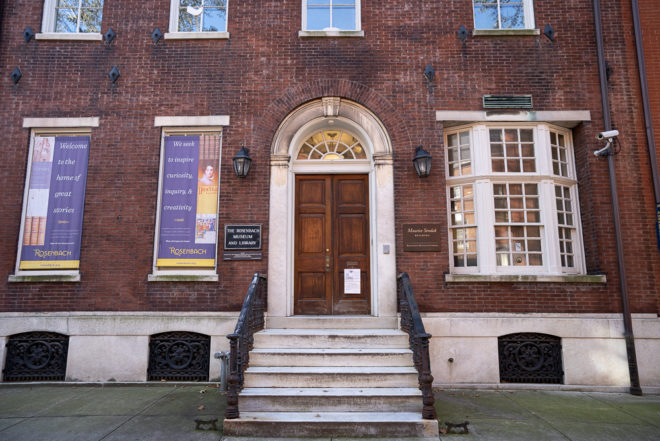 The Rosenbach Museum and Library will reopen to the public on October 20 after being closed due to the COVID-19 pandemic. | Photo: Michael Bixler

One of the first things you notice about the houses on the 2000 block of Delancey Place is their size. “Some time after the Civil War, these enormous, 7,500 square foot townhouses were erected,” said Derick Dreher, director of the Rosenbach Museum and Library, located on the block at 2008-2010. “Philadelphia was a thriving city and wealthy citizens wanted larger houses, where they could spread out a bit more. So the area west of Rittenhouse Square, which in many areas was almost entirely unbuilt, began to be built up more.”

Although the clientele were wealthy residents, the houses were not customized construction. “The developers built them on spec. There wasn’t a buyer already lined up for the houses, so they would build two, three, or four houses at a time,” explained Dreher. “There were two basic models from which you could choose. There was the model with a garden behind it, that’s what we have here at 2010 Delancey Place and then there was the model with a ballroom attached to the back of it.” In 1926, 2010 Delancey Place became the residence of A.S.W. and Philip Rosenbach, collectors and purveyors of rare books and manuscripts. After the death of both brothers, the Rosenbach Museum and Library was founded in 1954 to house their collection.

Elsewhere on the block, the advent of the automobile and Center City’s increasing population had led to the gardens being paved over for parking or built upon as a few houses were subdivided into apartments and condominiums. “The Rosenbach has the only remaining garden,” said Dreher.

For the next several decades, the garden received very little attention from the institution’s staff. “The garden was used, but it was also falling into disrepair,” recalled Dreher. “It was a place where you went if you needed a space, because there was very little room in a historic house to welcome a large number of people.”

Dreher’s arrival in 1997 marked a change in direction for the organization–to go beyond primarily preserving their holdings and providing access for scholars and researchers. “If all you have is a historic house filled with period pieces, and you’re asking people to walk through quietly and not touch anything, that doesn’t offer a place to do anything that engages people,” he explained. “We are very much trying to be a place of great experiences that engage our visitors actively, rather than a passive place where your only goal is to come there and admire in silence some sort of temple of culture. But that’s what we had in 1997.” 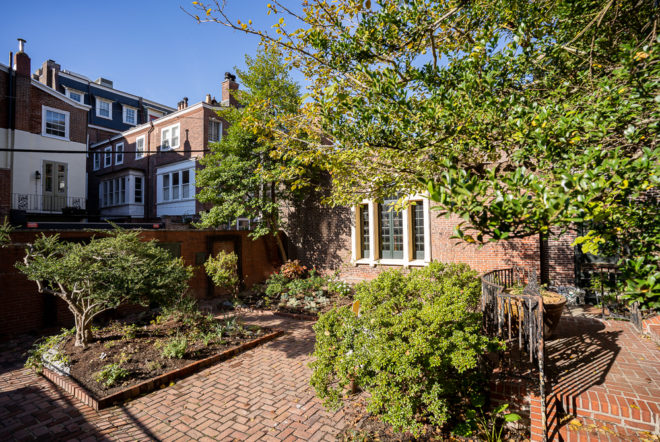 At the core of that programmatic change was the Rosenbach’s expansion into the house immediately to its east at 2008 Delancey Place to provide more exhibit and event spaces. The renovation required the construction of a ramp for accessibility. With both properties listed on the national and Philadelphia registers of historic places, building a ramp at the front wasn’t possible. It was installed at the rear, coming in from Panama Street, cutting into the garden and necessitating the removal of a wall along its east side.

The project occupied much of the organization’s energies and revenue for several years, leading up to the 2003 opening of the Maurice Sendak Building at 2008 Delancey Place. Although the staff and board always intended on returning to the garden for a renovation, other demands were more pressing, like creating new programs for the new spaces and the eternal quest for operating funds.

The Rosenbach’s new approach brought them many successes, from preschool programs to poetry “rent parties,” to their biggest event, the annual Bloomsday celebration, when the usually quiet block teems with fans paying homage to the museum’s most famous possession, the original manuscript of James Joyce’s Ulysses.

Then, in March 2020 the COVID-19 pandemic arrived. In Philadelphia, inside gatherings, like museum visits and cultural events, were cancelled. Throughout the region institutions were compelled to either shut down or rapidly reinvent themselves. For many, it quickly became apparent that the pandemic wasn’t going to end soon. “I was prepared for this to drag out,” recalled Christina Doe, the Rosenbach’s facilities manager. “I was scared, as were a lot of facilities managers of cultural institutions. We all acknowledged that this was probably going to be a long haul.”

Suddenly, the long-neglected garden came to mind among the staff. “I had seen from the very beginning of the pandemic that people felt safer outdoors,” said Emily Parker, director of Education and Interpretation at the Rosenbach, adding that outdoor spaces provided relief from endless virtual meetings, classes, and other work. “It was kind of an escape.”

“As the shutdown dragged on, people were desperate for things to do that were safe and engaging and that would get them out of the house,” explained Dreher. “Suddenly the garden seemed like something we couldn’t not pursue.” 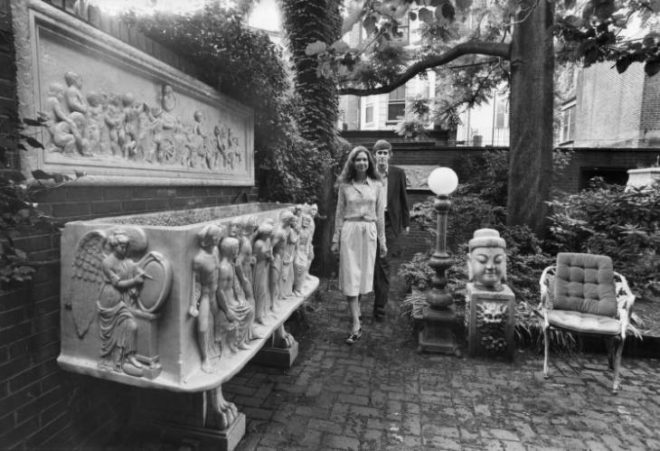 In a fortunate coincidence, in addition to maintaining the Rosenbach’s physical plant, Doe also worked as a landscape designer. She devised a plan to quickly provide some upgrades, while still going through the proper channels a nonprofit’s governance and funding structure require. “We started thinking about it in March, but really the construction on this renovation happened in August,” she recalled. “I bought plants in June and held them in stasis, waiting for certain go-aheads and lining up contractors.”

To keep to their speedy timeline they didn’t change much in the layout of the garden, although historical evidence was limited. “We have a lot of photographs about the interior of their home, but not a lot of photographs of the exterior,” noted Parker. “We’re quite certain that the layout was basically the same, except for the missing wall along the ramp.”

An oak tree had to be cut down, but several features, including a pair of iron chairs, a sarcophagus-like planter, a fountain, and a pair of decorative ironwork panels were all in place during the time of the Rosenbach brothers.

Next came the question of what to plant. “We brought a team together that included some of our curators, along with other educators on staff, to start thinking about how this would all come together,” said Parker. An idea for a literary theme came up. Could they choose plants that were mentioned in volumes in their collections? At first, Parker wasn’t sure. “I thought that it would be more difficult than it was to find authors in our collection that mentioned plants,” she admitted. “But it ended up that we had this huge list of possibilities. So then we whittled it down to authors that people would recognize. We have plenty of authors in our collection, but many of them are not household names.”

The final six represent a broad swath of the Rosenbach’s holdings and programmatic interests: William Shakespeare, Lewis Carroll, Emily Dickinson, Marianne Moore, Paul Laurence Dunbar, and Alice Dunbar-Nelson, as well as a collection of books of faith including the I Ching and Hebrew and Christian Bibles. At first, they thought about dividing the garden into a section for each, but there were overlaps in the plant selections. “For example, something like a violet is mentioned in basically every one of authors’ work,” said Parker. “So they’re scattered throughout the garden. Which I think is a nice thing because it allows people to discover an author that they hadn’t known about before, whereas if we had sectioned things off, that might not have happened.” 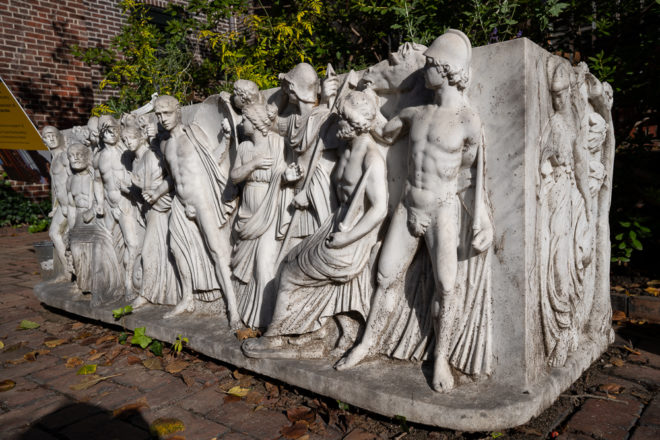 This neoclassical planter is one of a few existing items originally placed in the garden by the Rosenbach brothers. | Photo: Michael Bixler

To help navigate through the plantings and enhance the connection between the garden and the collections, the staff wrote interpretive guides for each of the authors. In laying out the garden beds, Doe continued the literary theme. “Because this was going to be a pleasure garden and not a formal garden or a specimen kind of garden, I needed filler,” she recalled. “I would consider two different kinds of plants to fill in a certain spot, and do a search thinking, ‘I wonder if somebody wrote about this?’ And the lists were big. It was easy to build a deeply interesting literary garden because there was just so much material to draw from.” She laughed that Emily Dickinson in particular made her job easier, as the poet seemed to have written about every flower in existence.

Dreher sees the garden and the guides as an extension of the programming approach the Rosenbach has been drawn to. “It’s an exterior version of what we’re trying to do on the inside. It’s not just a place where you come in and admire in silence and then leave. It’s a place where you engage.” Parker and the education staff also hope to resume some of the programs that were curtailed by the pandemic, like group read-alouds and activities for preschoolers. On October 20, a digital exhibition about one of the authors in the garden collection, Alice Dunbar-Nelson, will launch on the Rosenbach’s website.

Naturally, the staff felt the garden’s content would draw the literature lovers who already knew the Rosenbach, but Parker believes its appeal could go further. “We were trying to provide a gateway into this collection,” she explained. “For someone who just comes by and wants to enjoy a beautiful outdoor space in the middle of the city or someone who’s really interested in plants, for those kind of people we wanted the garden to be a kind of springboard to our collection. I think we have an opportunity here to invite people who wouldn’t normally think of themselves either as museum goers or interested in rare books and manuscripts.”

Dreher sees their garden renovation as a lesson many institutions are learning during the pandemic. “Many nonprofits, we are guilty of planning to plan,” he said. “We’ll talk about an idea for a year, consider a pilot project three years hence, and then if it still seems like a good idea, four or five years later, will actually start. The pandemic has forced people to embrace change very quickly. It has allowed people to drop long-held fears and doubts and has encouraged people to proceed with the good instead of waiting for the perfect. We took that approach with the garden. We’d been talking about an expensive, ambitious sweeping renovation of the garden, and it’s something we’d still like to do.”

With a note of irony in his voice, he related that, before knowing a shutdown was coming, the Rosenbach board had asked the staff what was needed to put their courses and reading groups online. Their answer was “at least a year and tens of thousands of dollars.” But then, like organizations all over the world, when the reality of the pandemic struck, they pulled it off in about 10 days. “They were a little clumsy at first, but now we’ve gotten pretty good at it,” he said. “And we looked back and said, what were we waiting for?”

Admission to the Rosenbach garden can be reserved in advance, with a limit of six visitors at a time. The historic house museum, rare book library, and special exhibitions reopen to the public on October 20 with timed admissions. See details HERE.