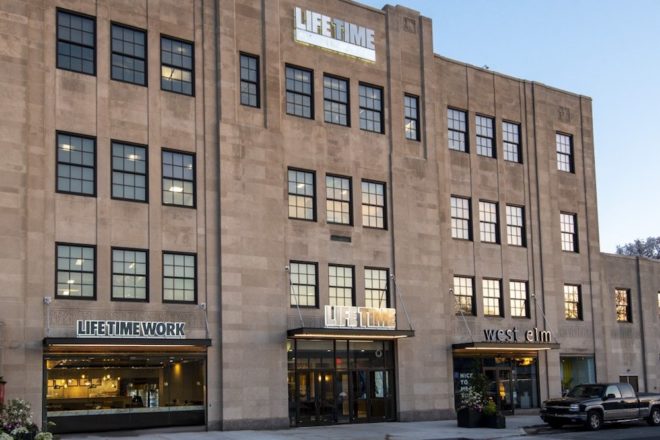 In 1930, the Suburban Company, a retail development organization, constructed a five-story building to the specifications of Strawbridge & Clothier for one of their first suburban branch stores. It was built directly across from the Ardmore train station. This was where affluent Main Line residents, including Helen Hope Montgomery Scott, on whom the Katherine Hepburn character in The Philadelphia Story was based, could indulge in big city shopping without going downtown. The location was so popular that the building was expanded by several thousand square feet after two months in operation.

My own relationship to Strawbridge’s in Suburban Square began in elementary school. My mom took me there for plaid cotton dresses, knee socks, and my first Brownie uniform which I wore as proudly as if I had joined the 121st Airborne. I glumly accepted the inevitable when Strawbridge’s morphed into Macy’s in 2006. But a fitness center in that marble floored, chandeliered emporium of Lenox china and Chanel perfume?  Ouch!

In 2017, the building was leased to Life Time Athletic, a 70,000-square-foot club with a reputation for turning exercise into a luxury service. This is no ordinary gym or fitness center. It is designed for people who want to be coddled and pampered as they spin their way into aerobic bliss. Decked out like an exclusive country club, Life Time contains a grassy courtyard, roof deck, daycare, spa, pool, café, and lounges. You could spend the day there without ever doing yoga or getting your heart rate above a mochaccino. Besides Life Time, the first floor also contains West Elm, a Williams Sonoma furniture store. 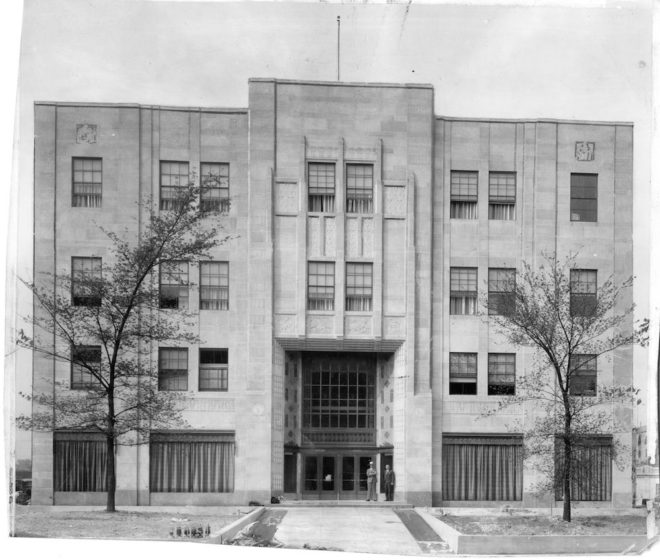 The department store shortly after it opened to the public in 1930. | Image courtesy of Temple University Libraries, Special Collections Research Center

Life Time, which has over 150 locations in the US and Canada, is sort of the Google of lifestyle. They not only design and own fitness centers, but also work and living spaces. Their in-house architecture and design team on this project was head up by architect Matthew Brinza, project manager Aaron Ludvigson, and interior designer Krista Rochat-Boeser.

“With a building of this age there were many challenges, starting with the design and documentation,” said Lidvigson. “ We were fortunate to receive the original structural drawings of the building from 1929. Unfortunately, there were no architectural drawings along with that, and the building has had a few remodels and additions since the initial construction. Having been built for retail, there was an added challenge to convert this existing building into a fitness center.”

Off came the exterior signage, lighting, and fabric awnings. A steel awning was installed, lighting added, and a backlight Life Time sign was added to two sides of the building. Where there used to be a street, and later a concrete pedestrian mall in front of Strawbridge’s main entrance, there is now Astro Turf where yoga classes are held. 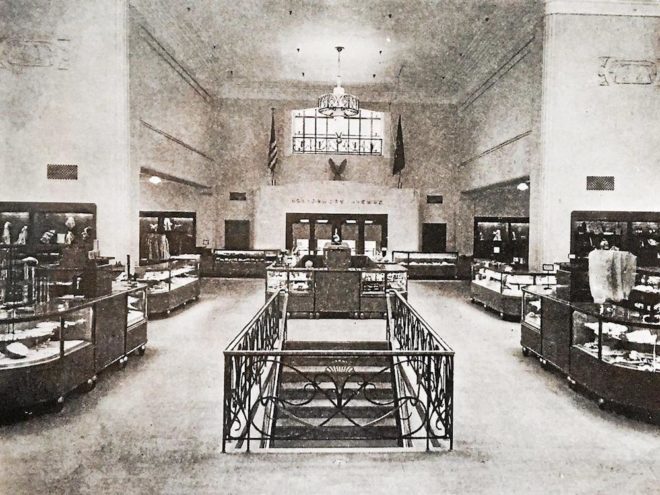 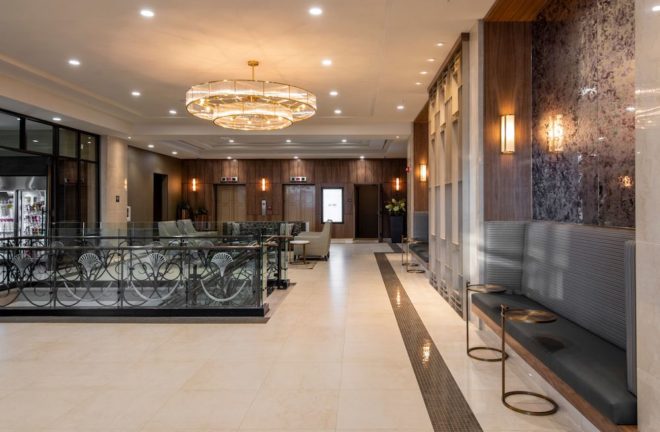 A view of the first floor of Strawbridge & Clothier’s Main Line store in 1930 and what it looks like today. | Images courtesy of JKRP Architects and Life Time Athletic

“Wherever possible, any existing brick at interior walls exposed during the remodeling was left and just cleaned. On the fitness floor, and the fourth floor work space, the existing steel structure was left exposed and painted. We maintained as much of the original character as possible,” said Lidvigson.

Fortunately, the firm did not strip away the 1930 elegance. At least not on the first floor. “The construction team had many conversations during their time onsite with neighbors and people that remember shopping in the building as kids,” Lidvigson said. “They would often express hope that we would retain some of the original detailing of the building. The railing of the grand stair was mentioned more than once on the list of things people remembered.” Also preserved were the marble stairs with decades of wear leading up all the way to the top floor. 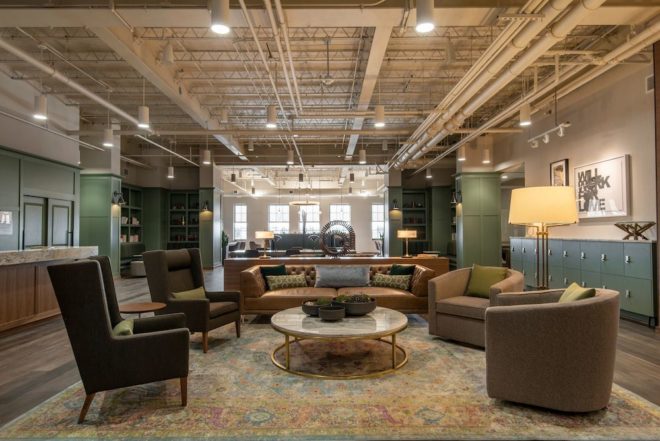 Some original features of the departments store can be seen in the converted lounge area. | Images courtesy of Life Time Athletic

The first floor, where I tried on Estee Lauder lipsticks, is the main reception area and café. The lower level of the building, where I once shopped for books, chocolates, and small appliances, has been converted into locker rooms, a spa, child care space, and the back of house area with laundry. “We also located offices and team member areas on this level. Since this was the largest of the floors, it gave us the flexibility to design in some of the larger functional spaces,” said Lidvigson. “The existing passenger elevators cabs were replaced and upgraded, but the original freight elevator remains in operation.”

The second floor was converted into the main fitness area of the building, including cardio, specialized and personal training, weights, and resistance training. The third floor became the studio floor, with two fitness studios, two yoga studios, a cycle studio, and a Pilates studio. The fourth and top floor of the building was turned into one of the first Life Time Work locations, a premium co-working space. You heard right. Work where you sweat, while sipping kale smoothies.