The Bryn Mawr Summer School for Women Workers in Industry Class of 1926. | Image courtesy of the Albert M. Greenfield Digital Center for the History of Women’s Education, Bryn Mawr College

Summer 2020 marked the 100th anniversary of the 19th Amendment granting women the right to vote, which has been noted in many ways this year. But it was also the centennial of the launch of another significant, although not well-known today, moment in women’s history in the United States: the Bryn Mawr Summer School for Women Workers in Industry.

It might have been completely forgotten, relegated to corner of the college’s archives, if not for a Ph.D. student, Rita Heller. Although she had been a history major at Bryn Mawr College in the 1950s, “We never knew this summer school had taken place at our alma mater,” she recalled. Nearly two decades later, as a graduate student at Rutgers University, she discovered papers about the summer school in the collections of other schools with specialties in labor education, but there had been no comprehensive study of it, so she took it on for her dissertation research.

Also around that time, the National Endowment for the Humanities (NEH) began encouraging scholars to work with filmmakers. Heller approached the college about applying to a film about the summer school, and the public relations director agreed. “In applying to the NEH, we specified that we would hold a reunion of summer school students and faculty,” she explained. “I was able to locate a number of graduates. Many responded and sent me memorabilia, like photos, letters and assignments.” Those contacts, and the reunion held on Bryn Mawr’s campus in June, 1984, resulted in the documentary film The Women of Summer, on which Heller collaborated with filmmaker Suzanne Bauman.

The Bryn Mawr Summer School for Women Workers in Industry was an idea of the college’s second president, M. Carey Thomas, the first woman to lead the institution. “She was a formidable woman in the history of women’s education,” explained Heller, who has been Associate Professor of History at the County College of Morris in New Jersey for over three decades. “Her tenure as Bryn Mawr’s president coincided with the suffrage movement.”

As a result of her involvement in suffragist organizations such as the National Woman’s Party, Thomas’s educational views became more progressive. In 2019, historian John Thomas McGuire wrote in Pennsylvania History: A Journal of Mid-Atlantic Studies that the ratification of the 19th Amendment prompted her to “think about the need for women’s cross-class solidarity.” However, in recent years, Bryn Mawr College removed Thomas’s name from a 1907 Cope and Stewardson building on their campus, the Old Library and Great Hall, owing to her racist and anti-Semitic views. 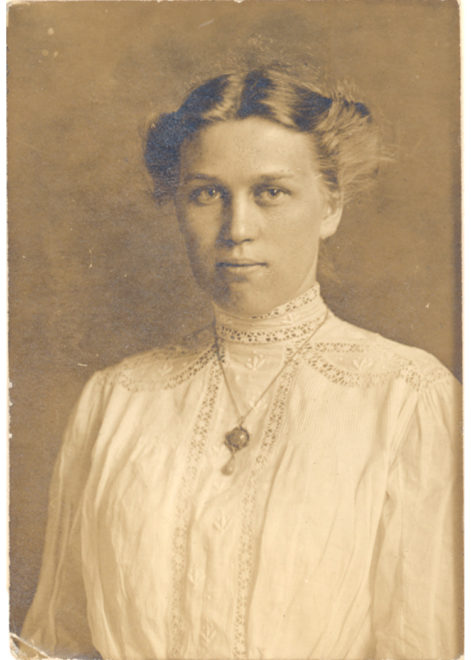 In 1920, Thomas turned the project over to Bryn Mawr’s dean, Hilda Worthington Smith, who had a background in social work and an active interest in workers’ education. “The actual planning and application belonged to Jane,” said Heller, referring to Worthington Smith’s nickname.

Thomas wanted the focus of the summer school to be general educational studies, similar to the offerings of the Workers’ Educational Association in the United Kingdom, and in contrast to mens’ unions in the United States, such as the American Federation of Labor, the leaders of which were not interested in workers’ education.

The curriculum included English composition, literature, political, social and labor history, public speaking, physiology, and hygiene. The faculty came from prestigious institutions, mostly along the East Coast. For the application process, a woman explained her work status, level of schooling, the nationality of her parents and grandparents, her voting status, and educational interests.

“There were many routes used to solicit students. They wanted to bring working women to the college, so the logical point of contact was unions. And to reach women, that meant especially looking to those representing the so-called ‘needle trades,’ like garment workers and milliners, such as the International Ladies’ Garment Workers’ Union (ILGWU).” They were also interested in reaching non-union workers, so they turned to the YWCA, which at the time was very active in providing services to women. 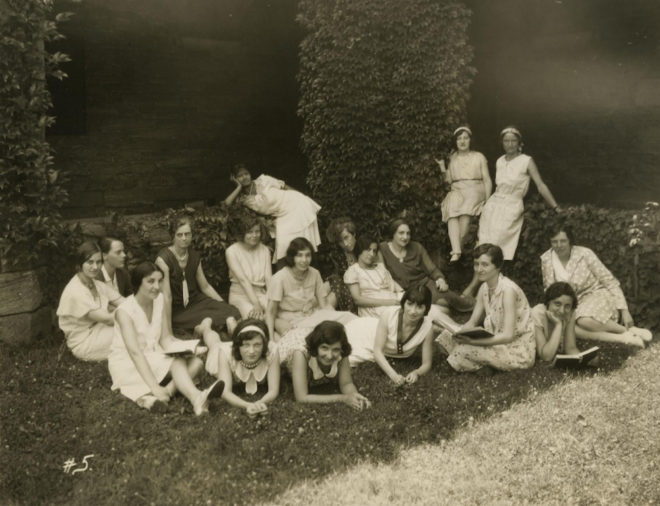 Students and faculty pose for a group photograph in the Cloisters at Bryn Mawr College. Date unknown. | Image courtesy of the Albert M. Greenfield Digital Center for the History of Women’s Education, Bryn Mawr College

Bryn Mawr’s alumnae groups across the country were enlisted to reach out to working women in their areas. Heller recalled one such group, in Montclair, New Jersey, publicized the program among silk mill workers in nearby Paterson.

Taking eight weeks off to attend a summer school seems beyond the reach of most workers in the United States today. At that time, however, factory work was often seasonal, with garment workers in particular starting up in the fall after a summer lull.

Beginning in 1921, each summer brought around 100 blue collar women to the campus, compared to about 400 traditional college students during the academic year, so it was a significant undertaking for Bryn Mawr’s size at the time.

In 1926, the program admitted Black women for the first time. “The credit goes to Jane Smith,” noted Heller. “She was a natural humanist and very conscious of the racial inequities in our country.”

Apparently Smith’s feelings were not shared by others. “The most fascinating document I found in the Bryn Mawr College archives was a handwritten letter to Jane from M. Carey Thomas, which Thomas ultimately did not send,” recalled Heller. “She wrote, ‘Do not mix reforms. As Susan B. Anthony said, drive straight, do not look right or left.’” 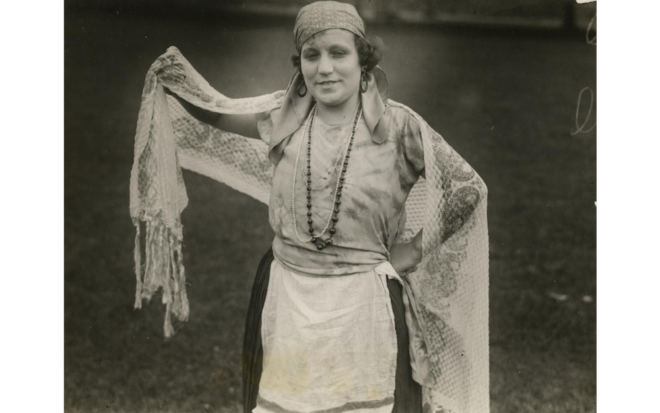 Francis Franklangia, a student from of Worcester, Massachusetts, wearing Italian garb in celebration of the International Peace Festival at the Summer School for Women Workers in Industry. | Image courtesy of the Albert M. Greenfield Digital Center for the History of Women’s Education, Bryn Mawr College

The annual budget for the program was about $20,000. In addition to contributions from unions such as the Amalgamated Ladies Garment Workers Union and the ILGWU, “The real money came from Bryn Mawr alumnae and capitalists,” noted Heller. The former included such famous alumnae as the poet Marianne Moore and Claudia Bryce Pinchot, who aside from being the First Lady of Pennsylvania was a vocal advocate of workers’ rights. As for the capitalists, donors included Andrew Carnegie, Mrs. Pierre DuPont, Mrs. Marshall Field, and John D. Rockefeller, Jr.

The latter’s family already had a history of supporting Bryn Mawr: his father provided the funds to build Rockefeller Hall in 1904, the third and final dormitory designed for the college by the Cope and Stewardson. The architecture firm’s work includes the College of Physicians of Philadelphia, the Overbrook School for the Blind, and numerous commissions from the University of Pennsylvania and Princeton University. Rockefeller Hall is a classic example of the Collegiate Gothic style popular at the time, with castle-like towers and an archway. Heller recalls a student’s telling of their reaction upon arriving at Bryn Mawr. “The Rockefeller Hall arch was one of the entry points to the campus. So they asked, ‘Does he own this place?’”

The Bryn Mawr Summer School’s reputation grew and spread quickly. “It generated a lot of interest,” noted Heller. “It was a well-known, elite college doing something interesting, so it got a lot of press. It attracted some of the best-known economists and English faculty of the time.” They included Wharton labor economist Gladys Palmer, Cornell labor historian Alice Hanson Cook, and Vassar English professor Helen Lockwood.

It also enlisted guest speakers who were major figures in their fields, although usually with a left-leaning bent. They included the civil rights activist W. E. B. Dubois, Marxist economist Harold Laski, workers rights advocate and first female U. S. Cabinet member Frances Perkins, organized labor leader Walter Reuther, and, most famously, Eleanor Roosevelt, who would go on to enlist Hilda Worthington Smith in establishing a female counterpart to the Civil Conservation Corps of the Great Depression.

“At that time, the field of workers’ education was loosely organized,” explained Heller. “The Bryn Mawr Summer School became the flagship program.” It was the model for several other programs, including the Wisconsin Summer School, Barnard Summer School, and the coeducational Hudson Shore Labor School, which was established on the site of Worthington Smith’s family’s summer home on the Hudson River. 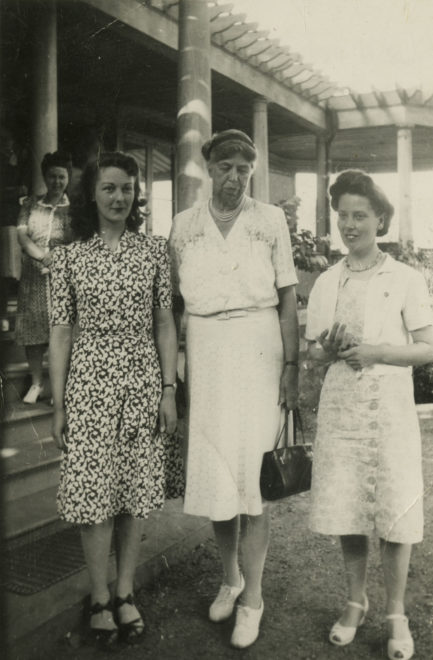 Students pose with First Lady Eleanor Roosevelt at the Summer School for Women Workers in Industry in 1939. | Image courtesy of the Albert M. Greenfield Digital Center for the History of Women’s Education, Bryn Mawr College

Eleanor Roosevelt visited the latter in 1939, and wrote about it in her United Feature Syndicate column, “My Day,” on August 2nd. “I am sure this school does a great deal to develop the mental abilities of the girls,” she wrote, “but I think it is equally valuable because of the health which they acquire, for they do all their studying practically out of doors, eat on the balcony, and swim and play together.”

“The Bryn Mawr Summer School was a complex, often contradictory enterprise,” observed Heller. “It was a significant force for change in the quiet years of Harding and Coolidge.”

One of the faculty was Broadus Mitchell, who at the time taught economics at Johns Hopkins University and later was the Socialist Party of America candidate for governor of Maryland. “He was thrilled that the students were concerned that the maids were housed in the attic of their dormitory,” said Heller. As their first activist action, they petitioned the school to move the maids into unoccupied rooms with the dormitory.

However, a later action eventually led to the downfall of the summer school. “In the summer of 1934, there was an activist strike at a food processing plant in South Jersey, Seabrook Farms,” said Heller. “A few of the labor economists on the faculty decided to visit, to observe the strike, but not participate. Some of the college trustees chose to believe that students had participated, which caused a crisis and the cancellation of the next year’s summer school. It resumed in 1936 through 1938, but with smaller classes.”

The controversy also caused difficulties in corporate and alumnae fundraising. In 1939, the school was transferred to the Hudson Shore Labor School and continued at that location until 1951. 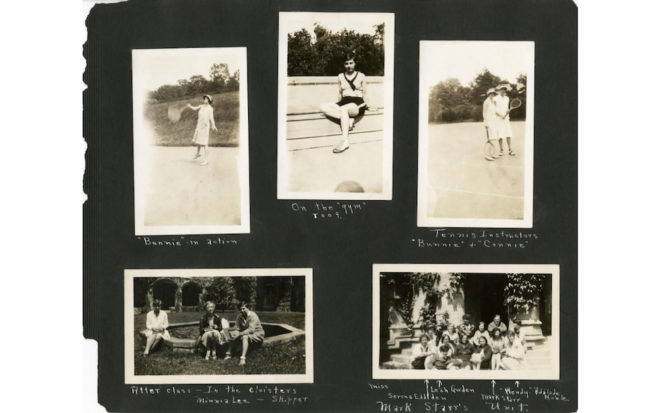 At Bryn Mawr College today, the Albert M. Greenfield Digital Center for the History of Women’s Education has an online exhibit, The Summer School for Women Workers: Diversity, Class and Education, created by Jennifer Redmond, the Center’s director at the time.

To mark the summer school’s centennial, a new exhibit is being curated by undergraduate and Special Collections Assistant Beck Morawski. It will focus on available firsthand accounts from students and will be a reflection on student experience at the Bryn Mawr Summer School, drawing attention to the ways in which attendees’ time on campus compared to the traditional Bryn Mawr College student experience, and how this specialized education departed from norms and exceeded expectations. The exhibition is slated for a March 2021 launch.