A Lesson on Structural Racism and Redemption at Northeast High School 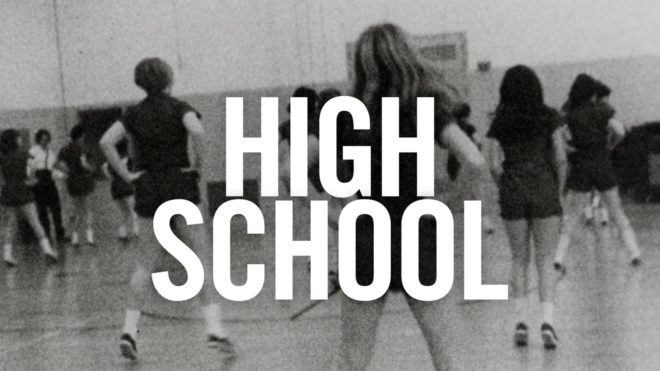 Fred Wiseman’s cinema verité documentary High School is a 75-minute time capsule of a different world. It was filmed at Northeast High School during March and April of 1968.

Teachers, clad in suits or dresses, deliver content as students, dressed only a bit less formally, sit passively listening. An older English teacher, for example, recites the dozen verses of the song “Casey at the Bat” to her audience of expressionless teenagers. In another classroom, her younger counterpart reads aloud the lyrics to Simon and Garfunkel’s “Dangling Conversation” to a similarly disengaged group of students. Even when she plays the song, on a giant contraption she has borrowed from the theater department, the zombie vibe persists.

Among the boys, signs of life emerge in the form of snickers and guffaws as a skeevy gynecologist offers bawdy replies to their anonymously submitted questions about sex. Girls, on the other hand, receive a humorless lecture on the perils of promiscuity. They are sternly warned to avoid wearing culottes.

The school disciplinarian, sporting a crewcut and a University of Pennsylvania class ring, dismisses any student concerns and metes out detentions and suspensions to all who come before him. Respect for teachers, for rules, for adult authority is more important than fairness. No questions asked.

Although the Tet Offensive in Vietnam had occurred the month before filming, and Martin Luther King, Jr. was assassinated when camera crews were on-site, this is a sealed off world of conformity, conventionality, and extreme homogeneity. The teachers are all white. Among the hundreds of students shown over the course of the film, all are white with the exception of five black boys, only one of whom we hear speak.

The story of how Northeast High School became a nearly all-white institution beginning in 1968 is an extraordinary tale of structural racism. If you have listened to the popular podcast “Nice White Parents,” it will be a familiar tale. But a more jaw-dropping one. In the 21st century, however, demographic shifts have made this erstwhile bastion of whiteness into a multiracial, multilingual, multiethnic place of learning that Philadelphia’s 1950s and 60s era of “nice white parents” could scarcely have imagined. 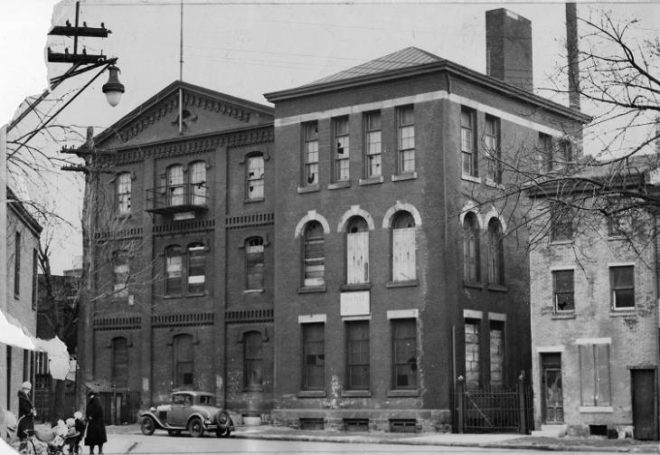 Northeast High School was founded in 1890 as the Northeast Manual Training School. It was located near Front Street and Girard Avenue until its move to 8th Street and Lehigh Avenue in 1905, a site it occupied until 1957. Although 8th and Lehigh today is considered North Philadelphia, at the time of the school’s founding it was indeed the northeast portion of the city. Much of what became the Great Northeast we know today was then farmland.

Like Central High School, it was an all-boys institution known for academic excellence, competitive sports (Northeast and Central have played an annual Thanksgiving football game since 1892 making it the oldest sports rivalry between public schools in the country), and high-achieving, loyal alumni.

With a national reputation, the school attracted famous visitors including Babe Ruth, Marian Anderson, and Albert Einstein. In 1951, Northeast High School was chosen as National School of the Year in recognition of “the citizenship of its students and for the success of its graduates in business, professional, and public life.” Northeast High School became known as the “School of Stars” because, according to the Philadelphia Bulletin, “so many of its graduates have advanced from humble homes to places of eminence.” 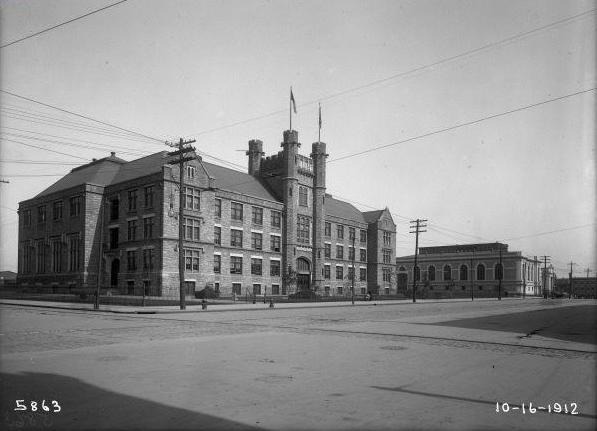 In 1954, the executive committee of the Northeast Alumni Association went before the Philadelphia School Board indicating that the school needed a new building due to deteriorating conditions and increased enrollment. The School Board, whose president Walter Biddle Saul had been the guest speaker at that year’s Alumni Association Annual Banquet, approved nearly $6 million for the construction of a new building.

Although the new school was to be co-ed and located seven miles to the northeast of its longtime location, the School Board approved the Alumni Association’s request that the “faculty, traditions, alumni, endowments, and aspirations of Northeast be transferred to this new school.” Thus, on May 1 1957, a dedication ceremony sponsored by the Alumni Association officially relocated Northeast High School to a brand new building at Cottman and Glendale Avenues in Rhawnhurst. This state-of-the art facility, surrounded by vast, pristine playing fields, would draw students from the surrounding neighborhoods of Mayfair, Oxford Circle, and Fox Chase.

Thanks to diligent research conducted by teams of Northeast High School students in the early 2000s, however, we can see that the public justifications given for the 1957 relocation do not align with the facts. Under the guidance of social studies teacher Donna Sharer and with the support of a Disney education grant, teenaged sleuths discovered many an inconvenient truth about the real reasons the Alumni Association advocated for a school in a new location.

Although the Alumni Association claimed that the physical plant at 8th and Lehigh was outdated and no longer conducive to providing a top-notch education, the school building was neither closed nor renovated. As soon as Northeast moved out, the facility became home to the new Thomas Edison High School. Even when Edison moved to a new site at Front and Luzerne Streets in 1988, the building remained a school, housing Julia de Burgos Middle School until 2002. The building was torn down in 2013.

The Alumni Association had also cited increasing enrollment as an impetus for the move. The student researchers, however, consulted Northeast High School yearbooks and student newspapers and found a marked decline in enrollment between 1944 and the mid-1950s. While there were over 800 freshmen each year between 1944 through 1948, by 1952 there were 621. In 1947, 846 students graduated from Northeast High School. In 1952 the total was 561.

Enrollment was not declining, but it was certainly changing. In 1947, fewer than five percent of Northeast graduates were Black. The percentage rose to 17 percent in 1952 and to 37 percent by 1956. The final class of Northeast High School students to graduate from the 8th and Lehigh location was 46 percent Black. 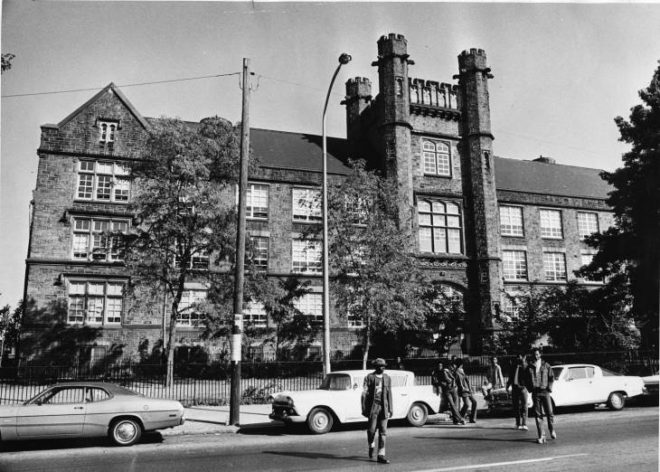 The increase in Black enrollment reflected the changing demographics of the surrounding neighborhood. In 1940, the area was 94 percent white and 6 percent Black. By 1960, 28 percent of the residents were Black, and a Puerto Rican community was developing as well. In contrast, the area around the new Northeast High School was, like much of Northeast Philadelphia during the mid-20 century, over 99 percent white.

Right before the move, the school at 8th and Lehigh was chosen as a pilot site for a two-year high school program for low achieving students. From a 1956 Bulletin article found by the student researchers: “Occupational courses are being developed for slow learners with little academic desire and aptitude so that the reorganized school may serve directly the needs of certain students.” Born amidst this atmosphere of diminished expectations and serving mostly poor Black and brown students, Edison High School went on to become the American high school that lost the highest number of students during the Vietnam War. 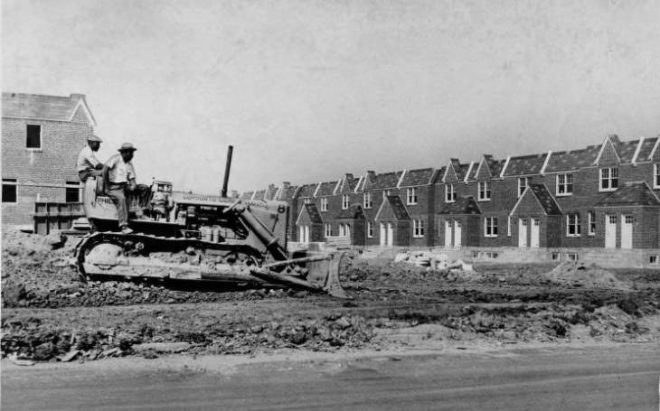 The overwhelmingly white composition of Northeast Philadelphia in the mid-20 century was the result of deliberate policies. During the Great Depression, color-coded maps developed by the Home Owners’ Loan Corporation differentiated between the newer, whiter neighborhoods of the still bucolic “new” Northeast (Rhawnhurst, Oxford Circle, Mayfair) and the older, more mixed areas of the “former” Northeast (Feltonville, Frankford, Juniata Park). This redlining solidified divergent trajectories for the regions.

As housing demand increased during the 1940s, federal funds were used to build Pennypack Woods and Oxford Village, public housing developments available only to white war workers and their families. After World War II, a construction boom encouraged “white flight’’ from the older, denser, and diversifying areas of the city to burgeoning Northeast neighborhoods, often financed by federal home loans that were nearly impossible for Blacks to obtain. The Northeast was thus firmly established as enclaves of all-white, mostly Jewish and Catholic, middle-class families. Realtors and homeowners cooperated to maintain the all-white composition of most blocks, and residents resisted municipal efforts to build low-income housing which could have brought minorities to the area.

The film High School encapsulates an era in which Northeast students lived in this intentionally created bubble of whiteness. The overwhelmingly white student body that we observe in Wiseman’s documentary reflects the unstated wishes of the 1950s-era Alumni Association.

Politics and policies gradually chipped away at the racial uniformity of Northeast High School. In spite of overwhelming community pushback, in the late 1960s some Black students were bussed to the school. In 1978, several African American teachers were forced to transfer to Northeast to comply with the School District’s faculty integration policy. 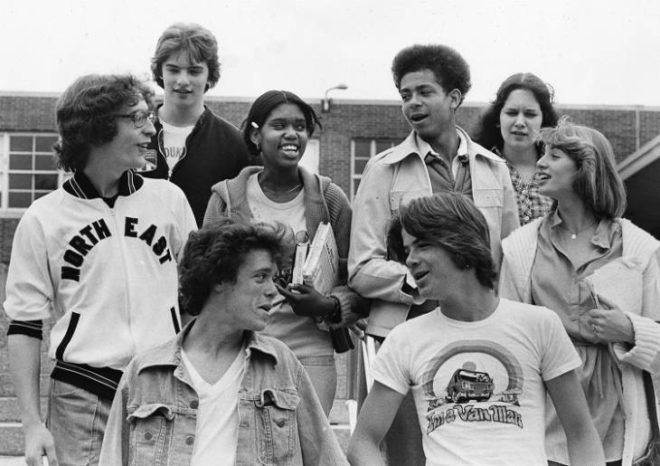 What really changed the makeup of Northeast High School’s student body, however, were demographic shifts rather than desegregation policies. Beginning in the 1980s, “white flight” accelerated from the neighborhoods surrounding the school, what we today call the Lower Northeast. White families who could afford to do so moved to areas like Somerton and Bustleton in the Far Northeast, an area served by George Washington High School, which opened in 1962. Other white families left for suburban Bucks and Montgomery Counties. The neighborhoods around Northeast High School became more affordable and attracted working class Black, Asian, and Latino residents. In 1990, the Northeast was still 92 percent white. By 2010 it was 58 percent white.

In recent years, the Lower Northeast has become a magnet for immigrants from literally all over the world. Sizable enclaves of Brazilians, Uzbeks, Syrians, Vietnamese, Chinese, Portuguese, and Colombians have transformed this once homogeneous region into a place that is remarkably multicultural. A 2018 Philadelphia magazine story captures the ethos of the area: “One recent morning, on a well-trafficked strip of Castor Avenue in Oxford Circle, a Chinese Buddhist, a Hindu of Guyanese descent, a Muslim from Morocco, and a Filipino Christian opened a new thrift store…(in a) building that had been home for 69 years to Jewish-owned Singers Appliances.” 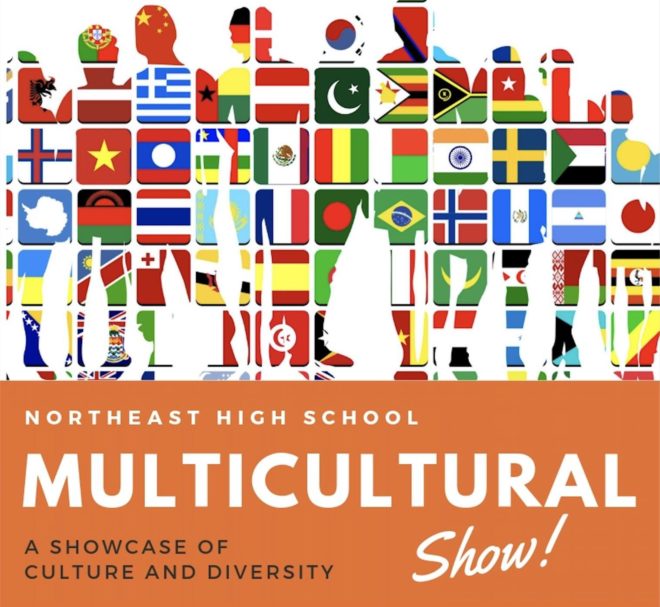 A flier advertising Northeast High School’s annual Multicultural Show. The school, rated the biggest and most diverse in the city, has 3,380 students and nearly one-fifth are enrolled in the English for Speakers of Other Languages program. | Image: Northeast High School

Northeast High School today is the most diverse school in the city. Currently the student body is 29 percent Black, 24 percent Hispanic, 22 percent Asian, and 18 percent white. In a 2019 Philadelphia Tribune article, Principal Omar Crowder describes it as a “small city,” a school of 3,500 students who come from over 60 countries. One in five receive English as a Second Language services. On a pre-COVID visit to Northeast High School, Crowder gave me a copy of America Border Culture Dreamer: The Young Immigrant Story for A to Z, a book of artwork and personal histories that explores the widely varied experiences of first-and second-generation immigrant students. It is not surprising that the photographer and educator Wendy Ewald who led the project chose to do this work at Northeast High School.

In 2009, actor Tony Danza tried his hand at teaching 10th grade English at Northeast High School in the short-lived, but poignant reality show, Teach. The world he enters is completely different than the one depicted in High School. Watch the full 75-minute documentary for free via Kanopy.

Although the students are mandated to wear uniforms beginning that school year, everything about the school feels more casual. In a reversal of the authoritarian discipline of 1968, Mr. Danza is reprimanded by an administrator for denying the requests of students with learning differences to visit the school’s resource room.

As a retired teacher, I know I would much rather teach in the lively, egalitarian, and polyglot atmosphere of today’s Northeast High School than in the stilted, sexist, and nearly all-white environment of the late 1960s.