Stephen Girard Building Springs Back to Life With New Hotel 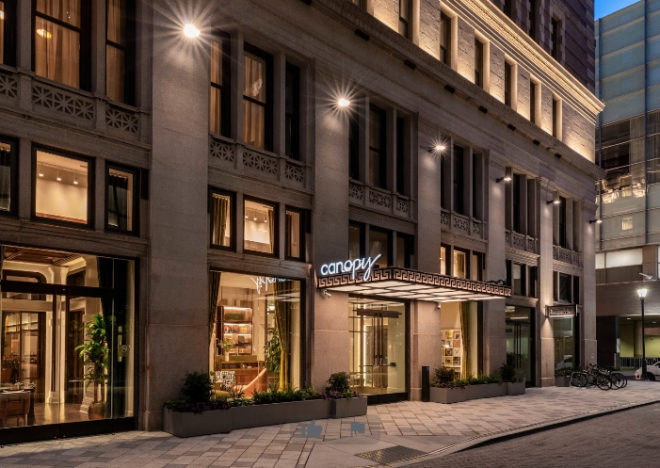 The $80 million renovation to the 123-year-old Stephen Girard Building is complete, and Canopy, a boutique Hilton Hotel, opens for business this week. | Image courtesy of Canopy by Hilton Philadelphia Center City

When America’s fourth wealthiest man, philanthropist Stephen Girard, bequeathed his estate to the City of Philadelphia it was earmarked for education and charitable institutions. So how did this magnanimous gesture result in the revival of East Market Street and the area’s newest endeavor–the $80 million conversion of the 1897 Stephen Girard Building into Canopy, a boutique Hilton Hotel?

To answer that, let’s follow the money. At the peak of his wealth, Girard’s net worth is estimated, by today’s standards, at a cool $105 billion. How he came by that fortune, and how it has been handled by Philadelphia City Trusts, is worthy of a Netflix series.

Girard was born in Bordeaux, France and had no formal education. The son of a sea captain, he became a ship’s apprentice at 14 and captain of his own ship at 23, importing coffee and sugar from the West Indies to the Colonies. Philadelphia was a major port of call. In 1776, when the British fleet controlled the port, Girard sold his ship, settled here, and became a successful merchant. 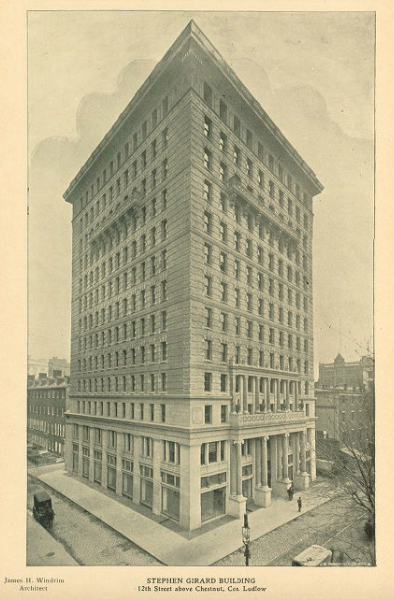 Here is where Girard’s story veers from the usual rags to riches tale. In 1793, when Philadelphia was the nation’s capital, it was also the epicenter of yellow fever. Think COVID-19 without respirators or antibiotics. Dead bodies piled up in the streets. While Girard’s affluent peers headed for the hills, he volunteered at a makeshift hospital just outside the city limits. A one-man FEMA team, Girard instituted sanitation, organized meals, hired apothecaries, and managed the entire operation. This act of self-sacrifice and compassion raised Girard’s stature from “merchant prince” to hometown hero.

Girard’s wealth came from shrewd investments in banking, railroads, and real estate. In 1807, he bought a prize piece of real estate extending from Market Street to the north, Chestnut Street to the south, between 11th and 12th Streets. At the time it resembled a toney slice of Chestnut Hill with an elegant mansion, lush lawns, and gardens. A fitting home for the wealthiest man of his day.

Throughout his life, Girard generously gifted institutions that reflected his concerns: Pennsylvania Hospital, Public School Fund of Philadelphia, Pennsylvania Institution for the Deaf and Dumb, and the Orphan Society. So, it was in keeping with his philanthropic works that, upon his death in 1830, Girard, bequeathed his entire fortune to charitable and municipal institutions in Philadelphia and New Orleans. That included an endowment for a boarding school for orphans which led to the creation of Girard College on a 43-acre campus in Fairmount. 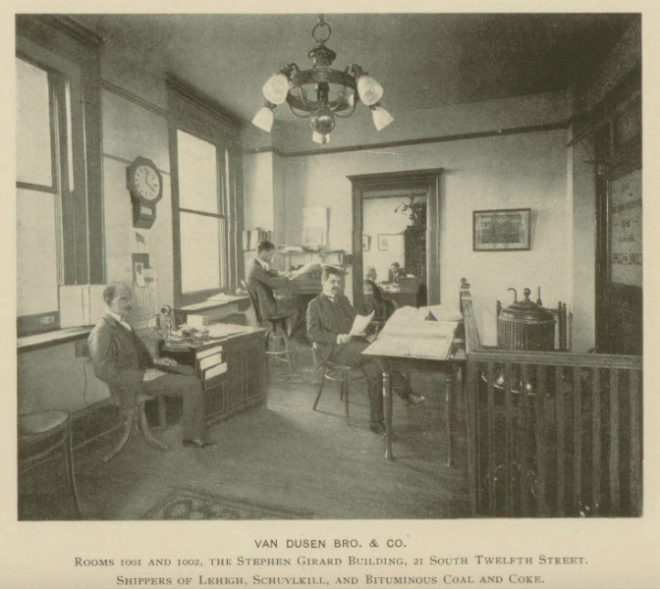 This photograph from the 1890s shows the offices of Van Dusen Bro & Company in the Stephen Girard Building. From Philadelphia Pennsylvania, The Book of Its Bourse & Co-operating Bodies, Philadelphia, Lippincott Press, 1898-99. | Image courtesy of the Athenaeum of Philadelphia

Girard bequest was–and still is–managed by the Board of Directors of City Trusts. 50 years after his death, the Board looked at his Market Street land holdings and decided to develop it. First, it leased an entire block to Snellenburg’s Department Store, designed by James H. Windrim in 1889. Then, the Board commissioned Windrim to design a skyscraper to be erected on the corner of Ludlow (formerly Girard Street) and 12th Street. Who would occupy this monument to wealth and power? The Board of Directors of City Trusts, of course.

No expense was spared for the Beaus Arts building, constructed of grey brick, terra cotta, and Indiana limestone. On its 12th Street entrance a deep portal was flanked with polished granite columns supporting caryatids on pedestals. The building’s oak doors were studded with antique brass. The lobby was dazzling, lined with white polished Italian marble with a winding marble staircase to the second floor.

The general contractors, Boyle & Boyle, had built the State Capital in Harrisburg and the 17-story Real Estate Trust Company at Broad and Chestnut Streets. Tacony Iron and Metal Company created elevators that were considered works of art. Considered by some as the most elegant office building in the nation, the Girard Building’s opening in 1896 was met with such enthusiasm that every office was rented out within one day. However, in the 1930s, the building’s 13 floors were dwarfed by the 27-story PSFS building in the modern International Style.

Back in 2006, the Stephen Girard Building almost went the way of the wrecking ball. Trinity Capital Advisers, who had leased the entire block, had a demolition permit and big plans, which begs the question. Why wasn’t the Stephen Girard Building listed for protection on the Philadelphia Register of Historic Places? Because the Board of Directors of City Trusts fought that, clearly valuing profit over historic preservation.

The good news? The architectural legacy of the building endures. BLT, a Philadelphia architectural and design firm, blasted off decades of debris. The cornice and caryatids were restored with exterior lighting added to highlight them. Along 12th and Ludlow Streets, the original storefronts were recreated and the main entry to the hotel lobby was repositioned to Ludlow Street.