It’s been a tough summer for leaders of the American Revolution. Protestors in Portland tore down a statue of George Washington in June. In July, a direct descendant of Thomas Jefferson called for the removal of the Jefferson Memorial in a New York Times opinion piece. Even the wildly popular musical Hamilton has been faulted for downplaying slavery.

There is, however, at least one figure of the American War of Independence who still seems worthy of adulation, even when viewed through a 21st century lens. In Philadelphia, we are fortunate to have both a statue and a historic site honoring this remarkable individual.

When Kościuszko returned to Poland he fell in love with a young noblewoman he’d been hired to tutor. After her father forcibly prevented a planned elopement and married her off to a prince, Kościuszko left for America in order to soothe his broken heart, utilize his military training, and act upon his revolutionary ideals.

A portrait of Thaddeus Kościuszko painted by Karl Gottlieb Schweikart in the early 19th century. The Polish colonel and engineer is shown wearing wearing the Eagle of the Society of the Cincinnati, which was awarded to him by General George Washington. | Image: Public Domain

His pivotal role in the American Revolution occurred during the summer and fall of 1777 when Kościuszko was serving as an engineer under the command of General Horatio Gates. In a significant defeat for the Continental Army, Fort Ticonderoga fell to the British, in large part because leaders higher on the chain of command failed to heed Kościuszko’s advice about how to defend the fort.

Kościuszko’s stratagems bought the Continental Army precious time, enabling them to build solid fortifications near Saratoga on the Hudson River. This became the site of the first significant American victory in the war. In a letter to Dr. Benjamin Rush, General Gates recounted, “The great tacticians of the campaign were hills and forests, which a young Polish engineer was skillful enough to select for my encampment.” American triumph at the Battle of Saratoga was a key turning point in the war, in part because it led King Louis XVI to have France join the American war effort. He then spent two years strengthening defenses at West Point. It was information about these innovative fortifications that Benedict Arnold sought to sell to the British.

Kościuszko served out the rest of the war doing combat duty, which he had requested, as well as engineering, in the Carolinas. While there he befriended anti-slavery activist John Laurens (yes, Hamilton fans, that John Laurens) and took over Laurens’ intelligence network following his death.

Kościuszko’s aide-de-camp throughout most of his Continental Army service was Agrippa Hull, a free Black man. Hull’s cleverness and courage convinced Kościuszko that Black people deserved the same inalienable rights for which the war was ostensibly being fought. During their time in the South, Kościuszko and Hull bore witness to the horrors of plantation slavery, a stark contrast to the revolutionary ideals of human equality. 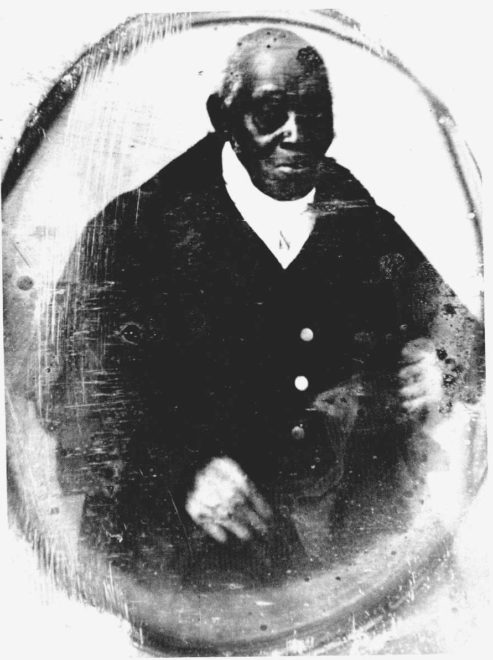 This daguerreotype of Agrippa Hull was taken by Anson Clark in 1844. | Image: Public Domain

When the Treaty of Paris was signed in April of 1783, Kościuszko conducted a celebratory fireworks display in Charleston, South Carolina. It must have gone well because Congress asked him to supervise a similar spectacle on July 4th of that year. At war’s end, Kościuszko was promoted to brigadier general and made an American citizen.

In spite of his stature in this country, Kościuszko soon returned to Poland to continue the pursuit of revolution. He led a movement to oust Russian and Prussian occupiers and to bring about democratic reforms. Sometimes referred to as Kościuszko’s Uprising, the effort was ultimately unsuccessful. At the order of Catherine the Great, Kościuszko was imprisoned in St. Petersburg for two years. Her son and successor freed him on the condition that Kościuszko not return to Poland.

By August of 1797, Kościuszko was back in Philadelphia where he received a hero’s welcome. Crowds thronged the banks of the Delaware River to greet him as bands played and cannons fired. Kościuszko’s friend Dr. Benjamin Rush advised him to leave the city until cooler weather would end the current round of yellow fever infections. He spent a few months visiting friends including Agrippa Hull.

When Kościuszko returned to the city, he took up residence at a boarding house on the corner of 3rd and Pine Streets where he received many prominent visitors including architect Benjamin Latrobe and numerous political and military leaders.

During this period he became close friends with Thomas Jefferson, a man he had long admired as the primary author of the Declaration of Independence. In spite of his reverence for the Declaration’s words, Kościuszko was dismayed by the hypocrisy of leaders like Jefferson and Washington who spoke of freedom and equality, but also enslaved hundreds of people. He tried to convince Jefferson that slavery was evil and inimical to revolutionary ideals to no avail.

The Thaddeus Kościuszko House at 3rd and Pine Streets being renovated and readied in 1975 for a house museum and memorial. | Image courtesy of Temple University Libraries, Special Collections Research Center

Before Kościuszko returned to Europe in 1798, he wrote a will, with Jefferson’s help, in which he left his back pay for war service ($18,912 and 500 acres in Ohio) for Jefferson to use “in purchasing negroes from among his own as well as any others…giving them liberty in my name…and an education in trades and otherwise.” Although Kościuszko wrote a letter reminding Jefferson about his wishes just one month before his death in 1817, Jefferson never carried out the terms of the will and asked a federal court to appoint a different executor. Jefferson’s inaction is particularly striking given that he could have used the money to emancipate the children he fathered with Sally Hemmings.

Kościuszko’s views on equality and liberty were well ahead of their time. In addition to his opposition to slavery, he advocated for greater equality for all kinds of people. As leader of the Polish uprising, he attempted to liberate serfs and welcomed the assistance of an all Jewish brigade. During his second visit to Philadelphia he befriended Chief Little Turtle of the Miamis with whom he exchanged gifts. Little Turtle gave Kościuszko a tomahawk and a peace pipe. Kościuszko gave the chief two pistols to “shoot dead the first man who comes to subjugate you.”

As Jefferson said of Kościuszko, he was “as pure a son of liberty as I have ever known, and of that liberty which is to go to all, and not the few or the rich alone.”

Although Kościuszko’s crucial feats of engineering may be why he is viewed as a hero of the Revolutionary War, his sincere commitment to our founding ideals is truly remarkable. Philadelphia is fortunate to have two memorials to Kościuszko.

A bronze statue honoring Kościuszko stands at 18th Street and the Benjamin Franklin Parkway. Created by Polish sculptor Marian Konieczny, it was a Bicentennial gift from the Polish Heritage Society of Philadelphia and the people of Poland. And Philadelphia is in good company. Kościuszko statues have been erected in many countries and numerous states. Many of the U.S. statues were erected in the 1920s with funds raised by Polish Americans seeking to combat rising anti-immigrant sentiment. Sadly, the base of a Kościuszko in Washington, D.C.’s Lafayette Park was vandalized in early June. Based on the graffiti, one can assume that the protestors were targeting President Donald Trump and the police rather than Kościuszko himself.

This monument dedicated to General Tadeusz Kosciuszko at 18th Street and the Benjamin Franklin Parkway was installed in 1978 and designed by Polish artist Marian Konieczny. | Photo: Michael Bixler

In addition to the Parkway statue, the home where Kościuszko lived at 3rd and Pine has been part of Independence National Historical Park since 1976. It was purchased for the National Park Service by Edward Piszek, the son of Polish immigrants and founder of Mrs. Paul’s frozen seafood. Piszek also bought and donated the house next door for additional exhibit space. Fun fact: the Thaddeus Kosciuszko National Memorial is the smallest site in the entire National Park Service system.

According the Independence National Historical Park website, the Thaddeus Kościuszko National Memorial has an exhibit about his life and military career, a seven-minute film in English or Polish, displays about his commitment to human rights, information about the many friends who visited him at 3rd and Pine, and a reproduction of his 18th century bedroom.

I don’t know about you, but once the COVID-19 restrictions are finally behind us, I will be making this historic site one of my first stops.